Graduating from the United States Naval Academy is a lifelong goal for some; for others, completing a master's degree at Purdue is the ultimate accomplishment. Nicholas Toan-Nang "Nick" Vu (MSME '20) had the opportunity to do both.

Nick grew up in Redondo Beach, California, and like many future engineers, had a passion for building things and taking things apart.  His parents helped him focus that energy into math and science. “My dad was a chemical engineer, with a real creative and technical mind,” says Nick, “he’s really my role model, so I was inspired to follow in his footsteps.” 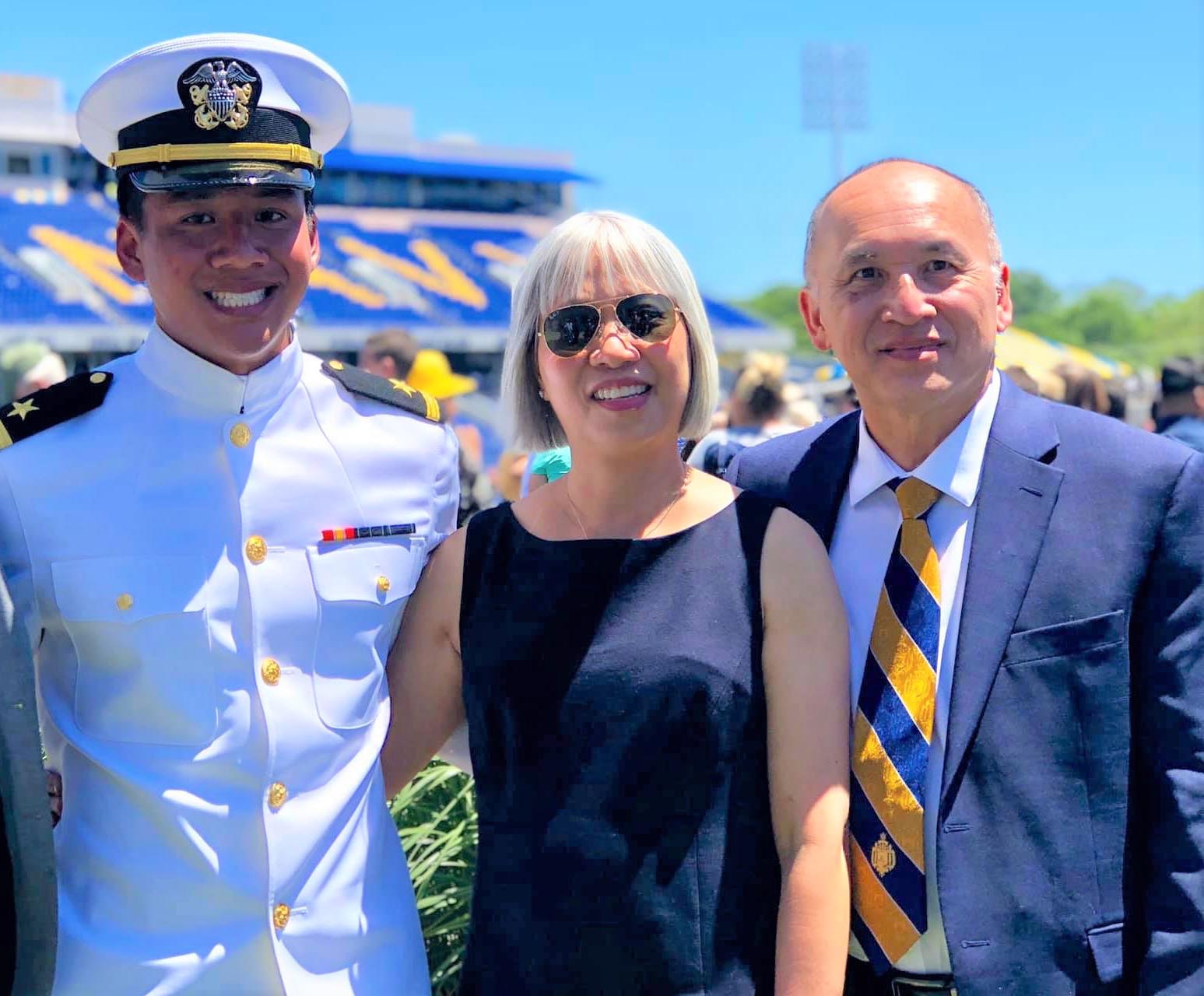 His dad also inspired him, indirectly, into a military career. “He was a refugee from the Vietnam War,” says Nick. “He was stranded at sea as one of the Vietnamese Boat People. He wouldn’t be here if he wasn’t saved by an American vessel. So I’m proud to be a first-generation American, and I feel a sense of duty to give back in some way.”

While attending the United States Naval Academy in Annapolis, Maryland, Nick had the opportunity to try many different branches of science and engineering, and ended up falling in love with thermodynamics. He finished his classes so quickly, that he was going to have a gap in his senior year. That’s when he approached associate professor Ron Warzoha at the Academy and asked if he could participate in research.

“Nick was obviously a really talented student academically,” remembers Warzoha, “but he was also a really hard worker.”  He points to an optics setup on one of his lab tables that uses frequency domain thermoreflectance (FDTR). “We had never built this system before; Nick built this from the ground up, as an undergrad! He also outlined the analytical and mathematical techniques behind how it works.  He was here all the time -- 40 hours a week sometimes.”

Seeing his passion for research, Prof. Warzoha reached out to Justin Weibel, research associate professor at Purdue. “I knew Prof. Weibel had a world class heat transfer laboratory at Purdue,” says Prof. Warzhoa. “It was really clear that Nick would be perfect for Purdue’s program.”

Since 2014, Purdue has hosted active duty officers as part of the Purdue Military Research Initiative. Every year, Purdue offers up to 10 full scholarships to active duty students to complete a graduate degree in engineering.  As an introduction, Prof. Weibel invited Nick to spend the summer in his lab, the Cooling Technologies Research Center, as part of a six-week summer internship called the Purdue Midshipmen Introduction to Research program.

“I showed up not knowing much about anything,” says Nick. “At the beginning, I had to dive into the papers, just to know the field I was researching. Then I shadowed a PhD student, to see how they performed experiments and did record-keeping. Eventually, they trusted me to run the experiments for them.” 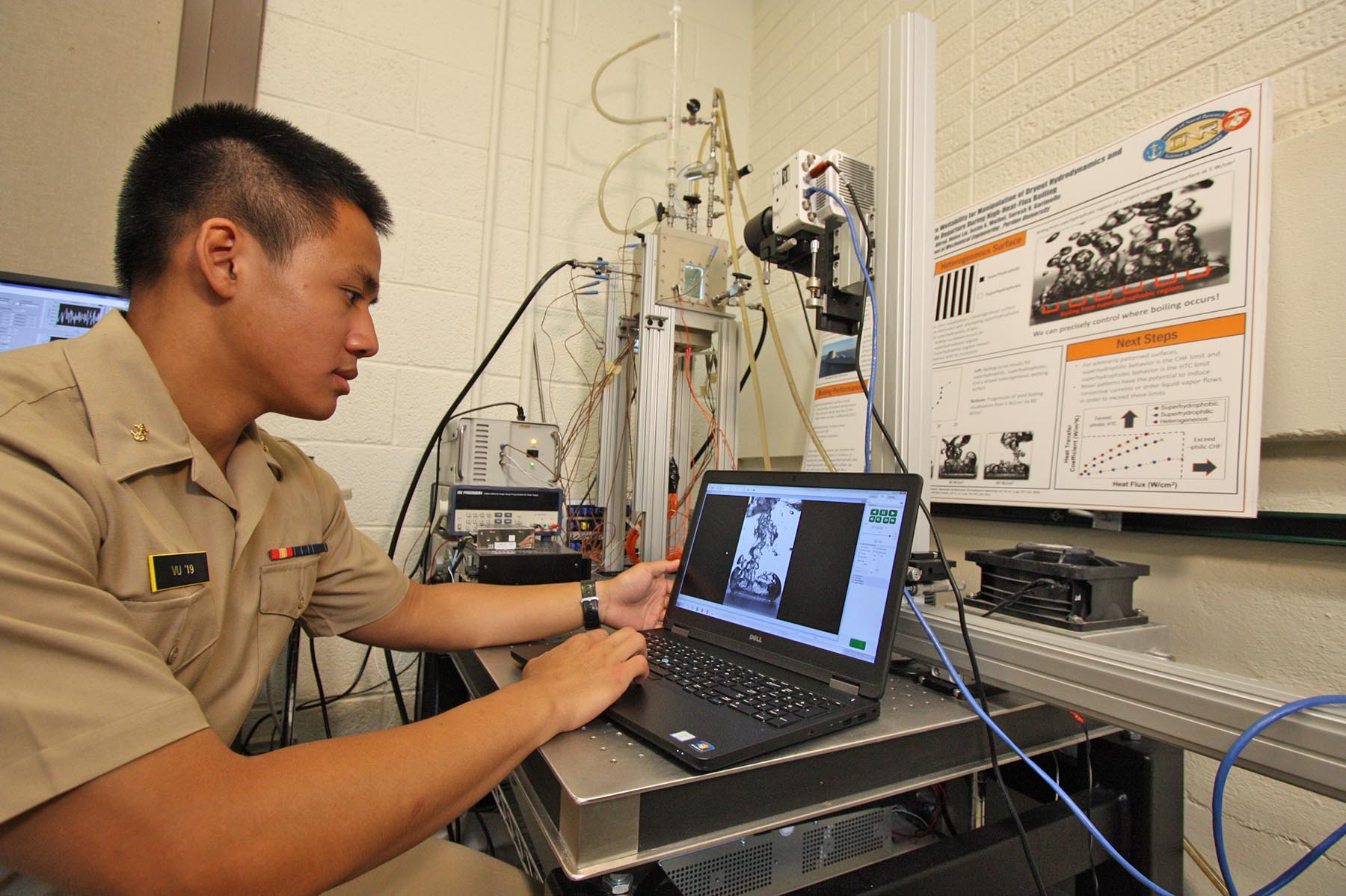 Nick also took the initiative for some side projects, such as redesigning lab equipment to make the experiments easier to run. “When I first started, I had to sit there for 8 hours and manually fine-tune this knob,” remembers Nick.  “I installed a PID control valve, so now all you have to do is push a button and it adjusts itself. It was pretty cool coming back later and seeing my little valve is still being used!”

“He did amazing work that summer,” said Prof. Weibel. “Not only did he set a great example, but he also lifted the spirits of all of us on the team. At the end of the summer, I told him, ‘You really need to come back for a Master’s degree.’”  Nick agreed, but with one catch: the Navy would only give him 18 months to finish the degree.  According to Prof. Weibel: “I told Nick this would be an aggressive timeline, but I believed he could do it, and we were going to start right away on day 1. By day 3, he already had spec’d out the infrared optics system for our experiment!”

Nick’s research involved infrared observations of pool boiling heat transfer, which required fabricating nano-scale surfaces to study.  Luckily, Purdue has one of the most advanced nano-fabrication facilities in academia, the Birck Nanotechnology Center.  “I had to become fully trained in the cleanroom,” says Nick, “using photolithography to fabricate these surfaces on silicon wafers.”

“That’s a difficult task for anyone,” says Prof. Weibel. “Not only did Nick have to learn all about pool boiling, but then he had to spend hours in that cleanroom, making these very precise sample surfaces. One speck of dust, and the entire thing is ruined.  Nick showed amazing patience and perseverance, even in the midst of this compressed timeline.”

Nick’s timeline became even more compressed, with the interruption of a global pandemic.  COVID restrictions shut down Prof. Weibel’s lab in March 2020, as all of Purdue figured out the next appropriate steps.  Nick kept up his engineering chops by assisting his roommate in a project to redesign N95 masks, whose elastic bands deteriorate over time. Their design not only extends the shelf life of N95 masks, but allows users to more safely and comfortably customize the mask’s fit. (Patents are currently pending through Purdue Research Foundation’s Office of Technology Commercialization.) 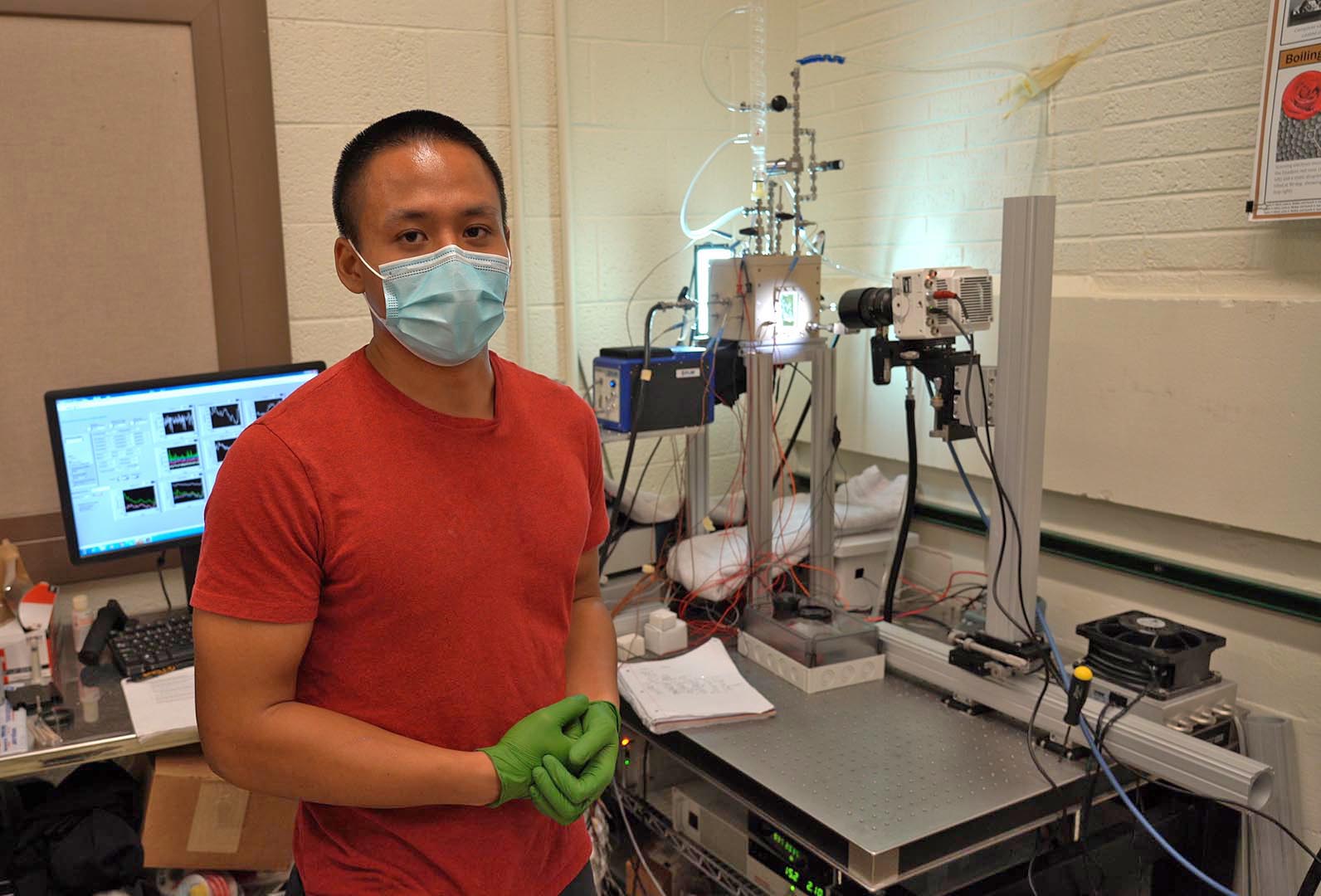 The labs re-opened in June, albeit with strict social distancing and other safety guidelines, enabling Nick to finish his degree in December 2020. “I finished my final experiments a week before my thesis was due!” laughs Nick. "Everyone in Prof. Weibel's lab has been so helpful. Even if it was 10:00 at night, someone would be there who would be willing to help me, and I would help them in turn. And during COVID, we all met regularly online to keep each other's spirits up. I loved how connected everyone was in the lab."

“I’m not surprised at all those hours he spent in a cleanroom,” says Prof. Warzoha. “He was the best student I ever had, and I’m so proud of him for what he did at Purdue, especially in these tough times.”

“Nick is the perfect example of the partnership between Purdue and the service academies,” says Prof. Weibel. “For years our research has been supported by the Office of Naval Research's NEPTUNE program. Now through the Purdue Military Research Initiative, we have a pipeline for Midshipmen and other active duty military to come to Purdue and get involved in the best research experiences available.”

As for Nick, his future is up in the air -- literally!  He has begun flight training at Naval Air Station Pensacola in Florida, on a two-year path to become a naval aviator. Whatever his future path may be, Nick is appreciative for his time at Purdue.

“Getting a Master’s degree at Purdue really opens doors for me for opportunities in the future,” says Nick. “I can become a military professor, or a civilian professor. I can go back to the Naval Academy and teach, and give back by being an instructor. Or I can go into engineering, or pursue academic research. I can adapt and overcome any challenge I come across.”