Not many people can claim that they programmed the first humanoid robot in space. Julia Badger (BSME '03) saw her hard work pay off with Robonaut, a sleek feat of humanoid technology that flew on the International Space Station. Today, as the Project Manager for the Robotics and Intelligence for Human Spacecraft Team at NASA's Johnson Space Center, she is designing the next generation of autonomous robots that will help humans explore the solar system.

“I was the first technical person in my family,” Julia says.  “I just loved solving problems.  Then in 9th grade, I read the book I, Robot, and I decided that space robots would be where I’d go with my career!”

For anything space-related, Purdue University was the obvious choice.  “Even though he wasn’t technical, my dad heard that Purdue is a great engineering school,” says Julia.  “It was the perfect place for me.”

And Mechanical Engineering was the perfect field.  “Mechanical Engineers can do anything,” says Julia.  “They know a little bit about electrical things, they work with materials, they do some civil engineering.  They touch a little bit of everything.  That’s why I chose it.”  She delved into systems and controls, including mechatronics classes taught by Professor George Chiu.  “I remember spending all night in the computer lab, trying to get that robot to climb a hill and drop a golf ball into a hole!  I don’t think we were ever successful at it, but we had fun trying!”

She also began volunteering with Purdue FIRST, a group of students who assist high schoolers with robotics competitions.  “Julia was really an outstanding student,” says Steve Florence, Purdue FIRST’s advisor.  “I remember her working on those FIRST robots.  She always wanted to become an astronaut, but even if she herself didn’t make into space, it’s so exciting to see her robots take the trip!”

NASA soon entered the picture, thanks to Purdue’s co-op program.  This allows students to alternate semesters between studying at Purdue and working in industry.  “Co-ops are so important, and NASA was my first choice,” says Julia.  “I interviewed and got in, which was thrilling!  I started working with the X-38, which was supposed to be the lifeboat for the International Space Station, but that got cancelled.  So I moved to robotics, and I’ve been there ever since!”

After a masters and Ph.D. from CalTech, Julia returned to Johnson Space Center to work full-time with robotics.  She applied her systems expertise to projects like the Space Exploration Vehicle, a pressurized rover that would allow astronauts to explore other planets.  Soon she joined the team behind the most ambitious robotics project at NASA: Robonaut.

“Robonaut is a humanoid dexterous robot,” says Julia. “It’s designed to function like humans, and share the same space as humans, doing mundane tasks that astronauts would otherwise have to do.  Things break all the time, and Robonaut is essentially the repairman.”  Robonaut also became a celebrity, with its own social media following and photos with dozens of dignitaries, from George Takei to One Direction. 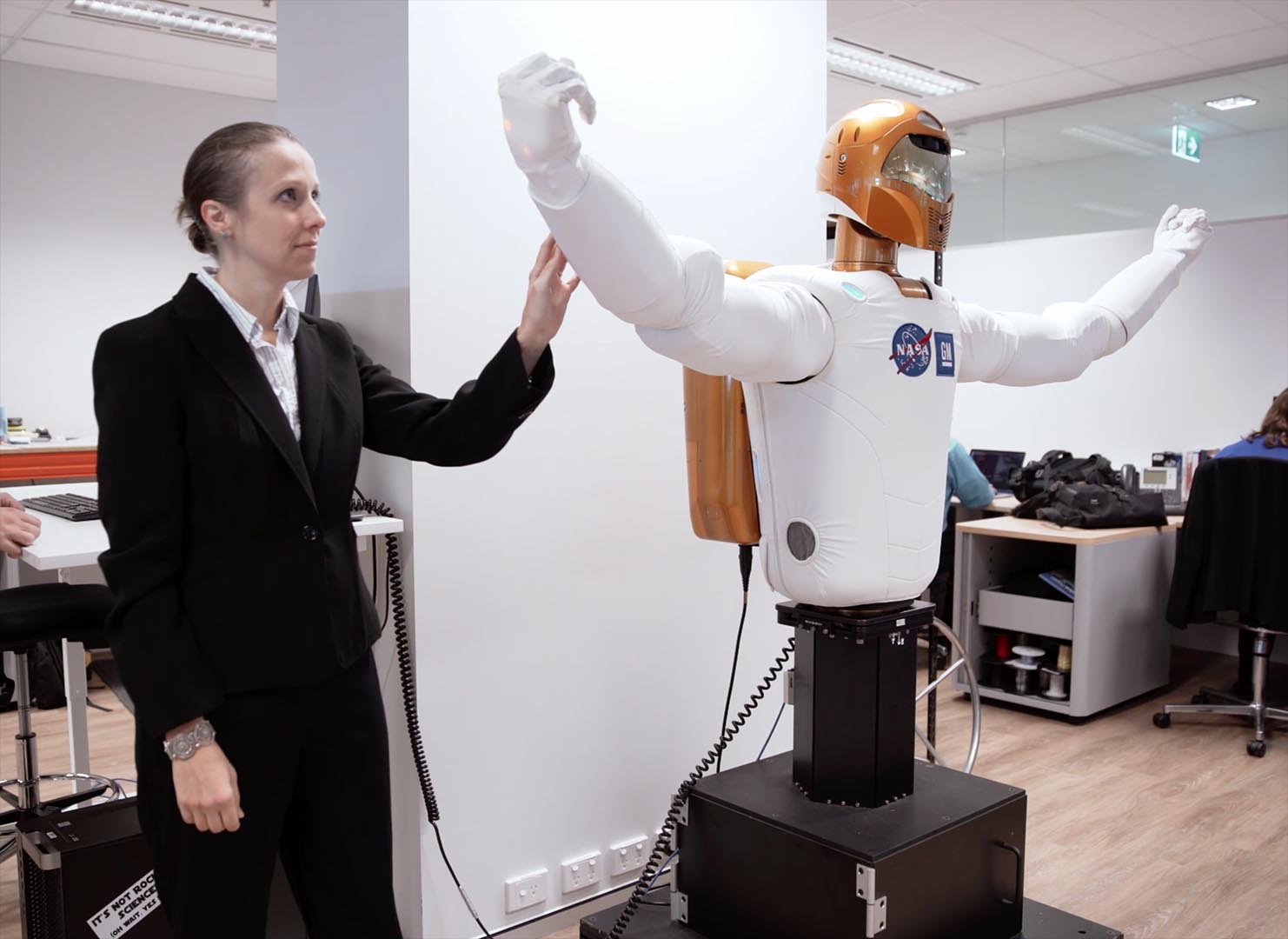 Julia served as application designer for Robonaut, designing and executing all the tests performed by Robonaut after it launched to the International Space Station in 2011.  Robonaut’s dexterity allowed it to grasp even the softest of items, clean surfaces, flip switches, and manipulate experiments on board.  They even attempted to give Robonaut mobility by manufacturing legs, for which Julia designed the control system.

Unfortunately, Robonaut developed significant hardware problems.  Despite many repair attempts by astronauts -- even though the robot was never designed to be serviced in space -- Robonaut returned to earth this year for a full check-up.

This could have been a crippling discouragement, but Julia sees it as the next logical step in a process.  “We’re in the business of developing new technologies,” she says.  “Robonaut is just one project, and the technologies we developed for Robonaut will transfer forward into the next phase of space exploration.”

For NASA, this next phase involves a new space station called the Lunar Gateway.  Beginning in 2022, this new platform will be sent into elliptical orbit around the moon, and serve as a jumping-off point for future missions to the Moon, Mars, and deep space.  Because the Gateway will be only be manned for a few weeks every year, autonomous robots will play a huge role in its operation.

“This is the first time we’ve had a complex human spacecraft which is uncrewed most of the time, and still expect it to function when people get there,” says Julia.  “We plan to have all sorts of robotic systems on board, to enable that spacecraft to autonomously take care of itself.”

While autonomous robots and rovers have conducted purely scientific missions in the past, Julia’s team is focused on advancing human space exploration.  “The goal of these robots is to enable human beings to visit other planets and do meaningful work there,” she says.  “We imagine robots on the Gateway doing experiments to test whether humans can survive and adapt to certain environments.  There’s a lot of secrets that we haven’t unlocked on the Moon and Mars, and robots can help us accomplish that.”

Looking back, Julia can see Purdue as her own jumping-off point for a career in space.  “My number one favorite thing about Purdue is how practical they are about solving real-world problems,” she says.  “Purdue’s focus on finding practical solutions is something that serves its graduates well, especially in the space program.  Problems are all around us, and engineers are the ones that fix them!”