A team of Purdue engineers has created the FirePUP, a three-wheeled vehicle designed to serve as a firefighting engine in Africa. In addition to pumping 200 gallons of water, the FirePUP can travel over all terrains, a necessity for areas in Africa that have few paved roads.

"I wanted to do a project that not only involved cool engineering work, but was also meaningful," said Mark Rackish, a fifth-year senior in Mechanical Engineering who was part of the FirePUP team. "I had done a co-op at a safety company and designed a breathing apparatus for firefighters, and even became a volunteer firefighter myself. So when this project came along, it was like my education came full circle."

The motivation for the FirePUP came from David Moore, Executive Director of Africa Fire Mission, a non-profit organization of American firefighters who share expertise and equipment with their African counterparts.  "Most of Africa has little-to-no knowledge of firefighting," said Moore. "When I visited Nairobi, Kenya, a city of 5 million people, I was shocked to learn they only had two fire engines to serve the entire city. And it's even worse in the villages, where standard vehicles can't go. Even a small-to-medium house fire or brush fire can be devastating."

Enter the PUP (Purdue Utility Project), created in 2008 by a team of students under the direction of John Lumkes, associate professor of Agricultural and Biological Engineering. "The PUP was designed to be the ultimate versatile vehicle for Africa," said Lumkes, who initially tested the vehicle in Cameroon. "It can carry people, equipment, and crops. It can till fields. It can grind grain. And most importantly, it can be built in-country, using easily accessible materials." 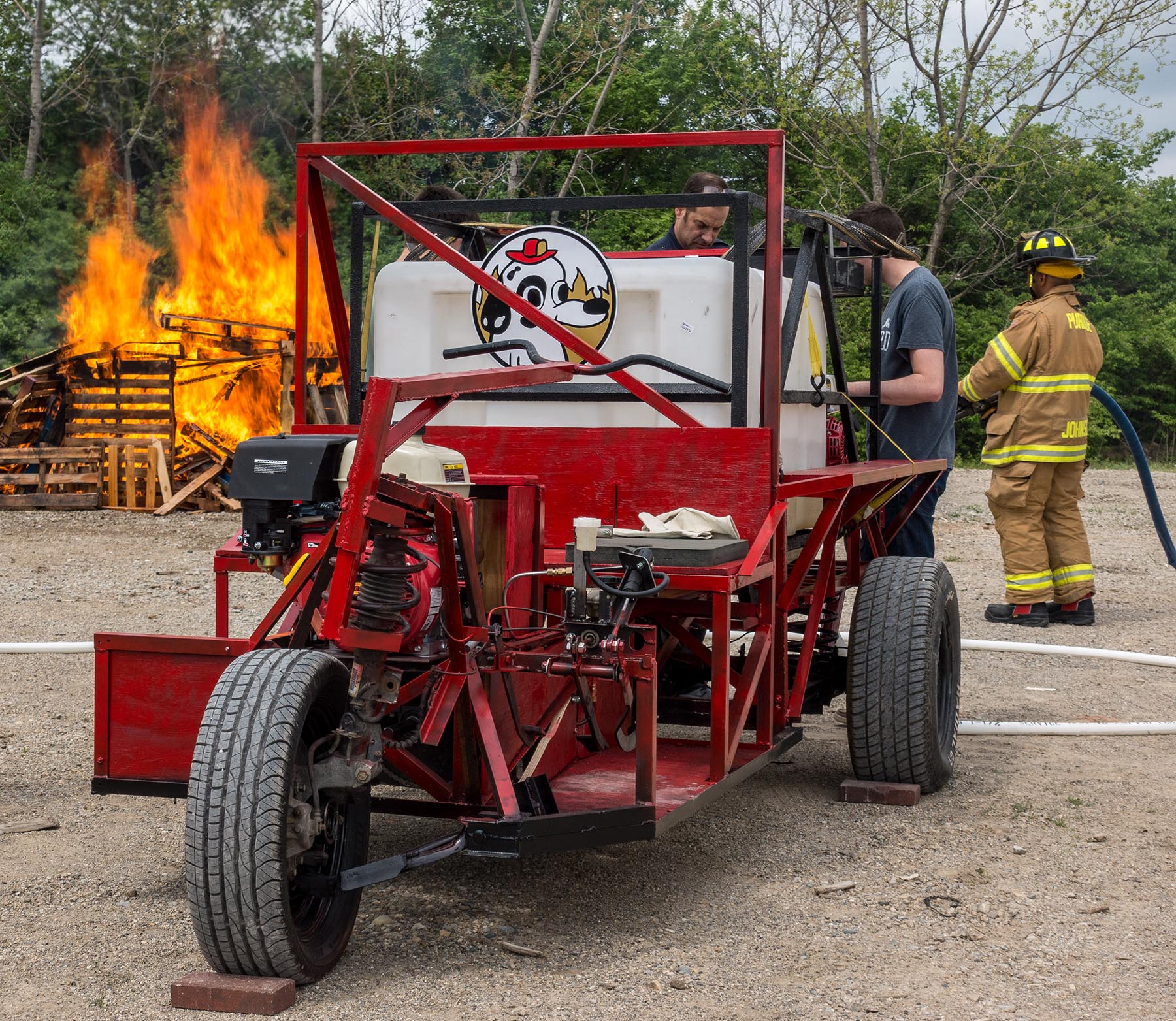 Moore contacted the PUP team in 2016 and inquired if a PUP could be configured as a fire engine. Mark Rackish and his team took on the project as their senior design capstone project for Mechanical Engineering, and called it the FirePUP.

"The vehicle itself is made of angle iron and wood," said Rackish, "cheap materials that are easy to find in Africa. We have a 15-horsepower engine, but potentially you could use any engine." Many of the vehicle's parts were scavenged from a Ford Ranger pickup truck. "It has three wheels, which not only makes it stable, but also cheaper and easier to build."

The firefighting module slides in and out of the FirePUP's truck bed, so it could potentially be used in other vehicles as well.  An intake hose allows firefighters to fill up the 200-gallon tank with water from any source, such as a pond or a stream. "We designed the pumping manifold from PVC, so you can attach up to three firefighting hoses," said Rackish, "but garden hoses also work great."

To test the FirePUP, they enlisted the help of the Purdue Fire Department to create a suitable experiment.  "Homes in Kenya are usually small, made of wood and corrugated metal," said Rackish. "So they determined that a stack of ten wooden pallets would have the equivalent amount of energy." After deploying the FirePUP, firefighters were able to extinguish fires of seven, ten, and even twenty wooden pallets before the 200-gallon water tank ran dry.

"It exceeded expectations," said Rackish. "It proved the FirePUP's usefulness as a rapid response vehicle. As soon as there is a house fire or brush fire, the FirePUP can be deployed to either put out the fire, or contain it until more help arrives."

"This could be a game changer," said David Moore of Africa Fire Mission, who soon plan to send the vehicle over to Kenya in a shipping container. "It's a versatile vehicle that can go on any terrain. Providing 200 gallons of water and a hose, to any rural location, has the potential to save lives."

Learn more about the PUP at https://engineering.purdue.edu/pup

Learn more about the Africa Fire Mission at http://www.africafiremission.org