They say “slow and steady wins the race.” But does that apply to motorsports? For 30 years, Purdue Formula have been pushing their custom-built race car up the mountain, and in 2022, they reached their best-ever podium finish: 2nd place overall.

“Formula SAE is part of the Collegiate Design Series, held by the Society of Automotive Engineers,” says Arpit Agarwal, an aeronautics and astronautics student who worked on the car’s aerodynamics in 2022, and will serve as Chief Engineer for next year’s team. “There are competitions for different kinds of cars, like Baja off-roaders and electric vehicles. We focus on the combustion team.”

“It’s roughly a half-scale Formula 1-style vehicle,” says Tyler Green, President of Purdue Formula, who just graduated with a degree in aeronautics and astronautics. “We run a 450-cc Yamaha single-cylinder motorcycle engine, making about 55 horsepower. We have a full aerodynamics package: front wing, rear wing, and undertray. It rolls on 18-inch diameter tires. Altogether, it weighs about 389 pounds, and goes from 0-60 mph in about 4.5 seconds, and corners at about 2Gs, which is more than a Porsche 911. It’s a fast car, and a lot of fun to drive!”

To design and build such a fast vehicle requires a huge amount of planning. “We actually start in the summer,” says Tyler. “While everyone is working at their internships, we start collaborating remotely on the design of the next year’s car. Once we get back on campus, we’ll finalize the design of the all the subsystems.”

That’s easier said than done, considering that the team also spends its fall actively recruiting new team members. “We have many roles to fill,” says Arpit. “We have a Suspension team; a Chassis team; a Powertrain team; an Aerodynamics team; and Systems Integration, which gets everything working together. We also have Business teams, which help us to raise and manage money.”

Indeed, students are responsible for finding sponsors for their car, and negotiating for in-kind donations of parts, materials, and services. The finished car features decals from Boeing, 3M, Siemens, and dozens of other companies that have contributed. 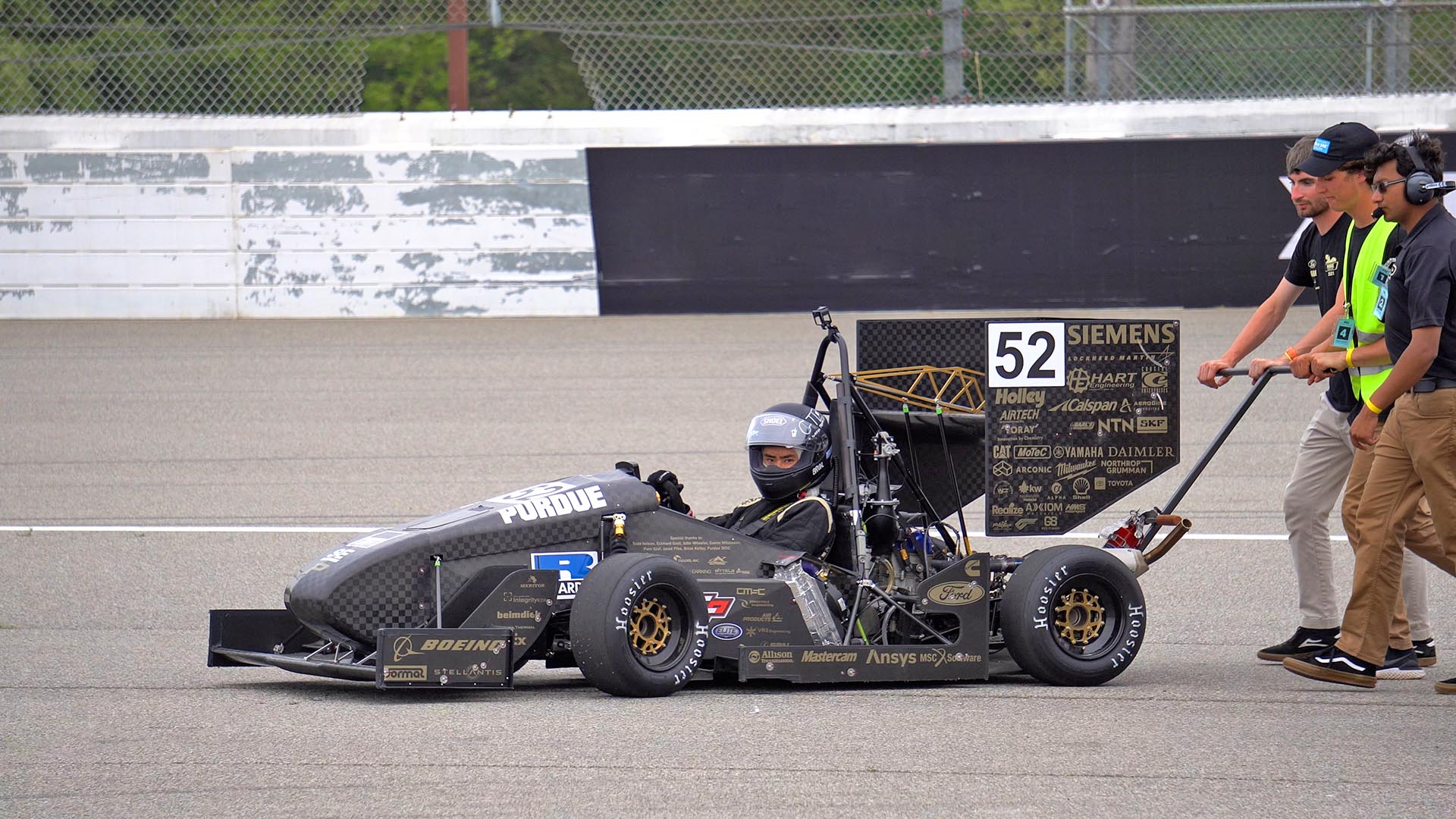 “I think the management aspect of the Formula team is where they really shined this year,” says Todd Nelson, the team’s faculty advisor and managing director of Purdue Motorsports. “During the pandemic, they developed a system to asynchronously onboard new team members, going through through a CAD workshop before students joined a specific subteam. They also stepped up their documentation game, which enabled everything they learned last year to be passed down to this year’s team.”

This pandemic-era system paid off in 2021, when SAE ran virtual competitions for design, business plan, and overall cost. Purdue’s enhanced focus on documentation scored them a 2nd place in these virtual events, besting 130 other university teams worldwide.

Of course, creating CAD designs and filling out spreadsheets is one thing. What about when the rubber meets the road?

“It usually takes all winter and spring to manufacture the car,” says Tyler. “We spend many long hours at Bechtel Innovation Design Center creating parts, and then welding and assembling them in our workshop. Our team members are so dedicated; you’ll see them here all night and all weekend, giving up any spare hours they have to complete the car.”

When the car reaches a semi-finished state, students are eager to get it out onto the track and test it. But this year, they had to deal with an unforeseen problem: snow. 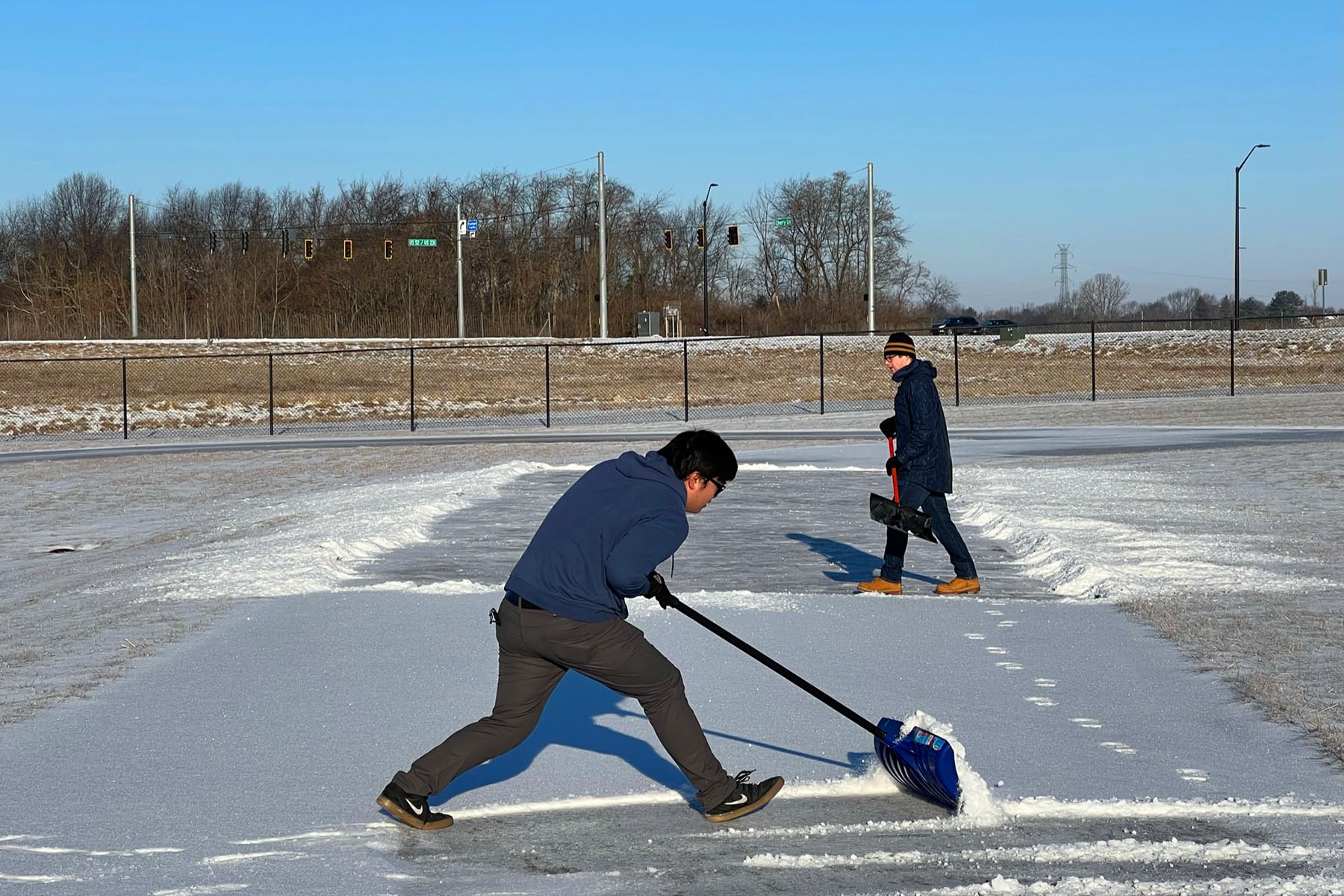 When you want to race, nothing is going to stand in your way! Students shoveled snow off the entire Grand Prix track just for the chance to test their Formula car on dry asphalt.

“It’s a very Indiana thing to have snow at Spring Break!” laughs Tyler. “But we were so eager to test, we had team members shoveling the Grand Prix track for hours, just so we could have some dry asphalt to drive on. We tested every single weekend: in rain, snow, wind, and everything else you can imagine. We drove this year’s car more than 500 miles before ever going to competition.”

“I’m a huge fan of the design portion,” admits Arpit, “but there’s nothing like actually testing the car. Once you’ve put all that work into it, and validated your engineering choices, seeing the car just rip on the road is very satisfying!”

They were so confident, they did something no other Purdue team had never been done before: a live reveal event, to present the finished car to the public.

“These students experienced the better part of their college career through Zoom screens on their laptops,” says Todd Nelson. “They thought 2022 was a good year to throw open the doors and invite everyone to see these amazing race cars in person. Hundreds of people showed up to the theater, and we had such a great time showing off the Formula car, as well as the Baja and Electric cars. It really gave them the morale boost they needed heading into competitions.”

Best of the best

May 2022 saw the return of fully in-person SAE competition weekends. Dozens of university teams from the U.S., Canada, Mexico, Venezuela, Brazil, and Germany brought their cars to Michigan International Speedway. All year long, these students have spent most of their waking hours focused on the success of their custom-built race car. Now they get the chance to see whose engineering comes out on top.

This year’s event began with business and design presentations, which Purdue students entered confidently. They finished 3rd in Design, and 2nd in Sales Presentation, among the 99 schools who participated. This gave the Boilermakers great momentum as the dynamic events got underway. 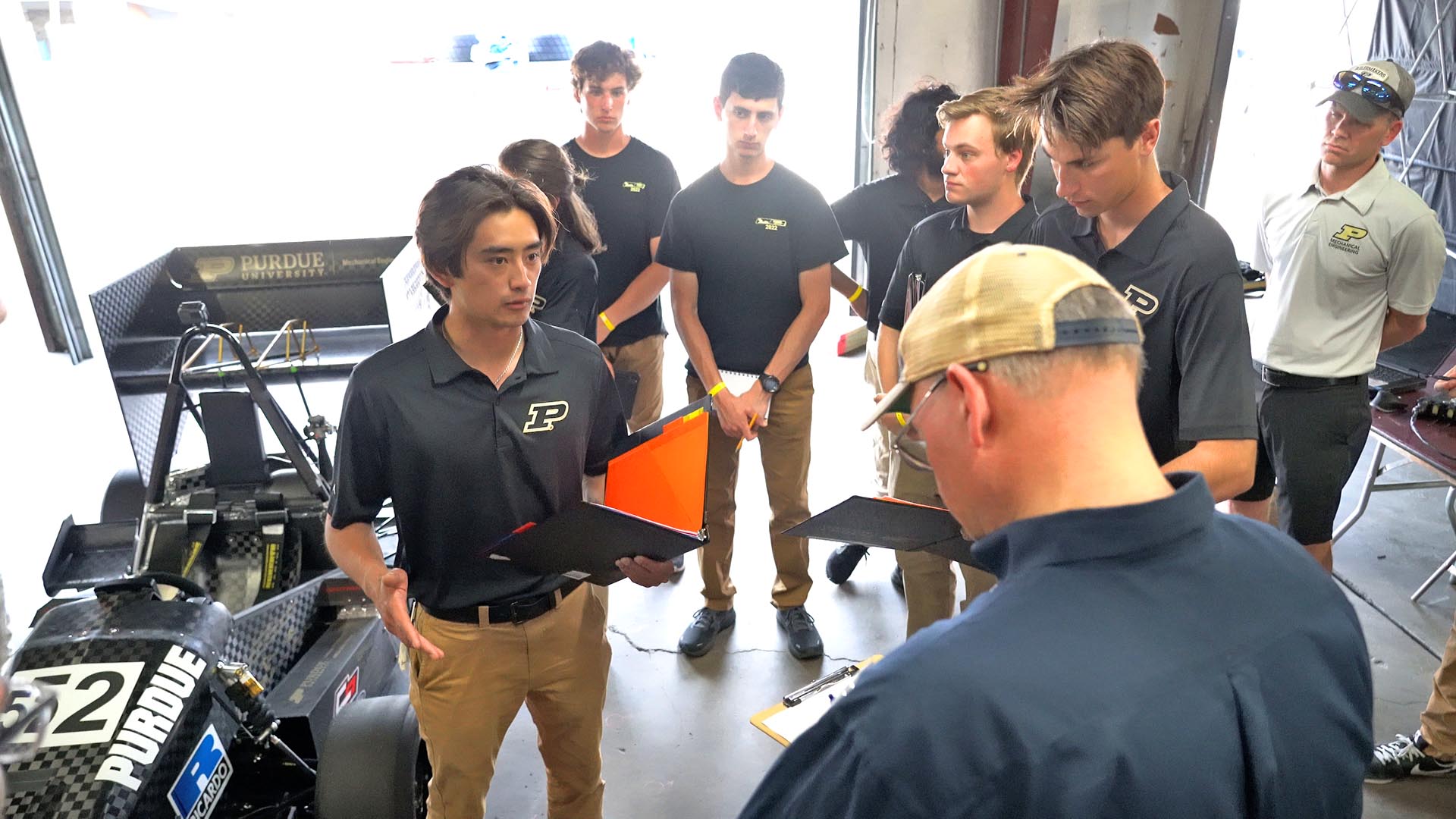 Presenting your engineering decisions to industry judges is just as important as actually building and racing the car.

“Dynamic events started with a straight-line acceleration test, which we knew was going to be our weakest event,” says Tyler. “In 2022 we made the decision to switch from a four-cylinder engine to a one-cylinder engine. This is a reduction in power, but it also enabled us to trim 90 pounds of weight compared to last year’s car, which would benefit us in the long run.”

This shone through in the Skidpad test, showing the car’s cornering ability. Purdue Formula’s lightweight car finished 3rd in that event. Following an Autocross lap where they finished 11th, the team prepared for the final test: the Endurance race.

“The Endurance race goes for about 16 miles, and takes about 20 minutes,” says Arpit. “That doesn’t sound like a lot, but there are many things that can go wrong in the middle of a run. We have really put the car through its paces throughout the weekend, and the Endurance race is the final hurdle to clear. Just finishing Endurance is a big ticket item.” 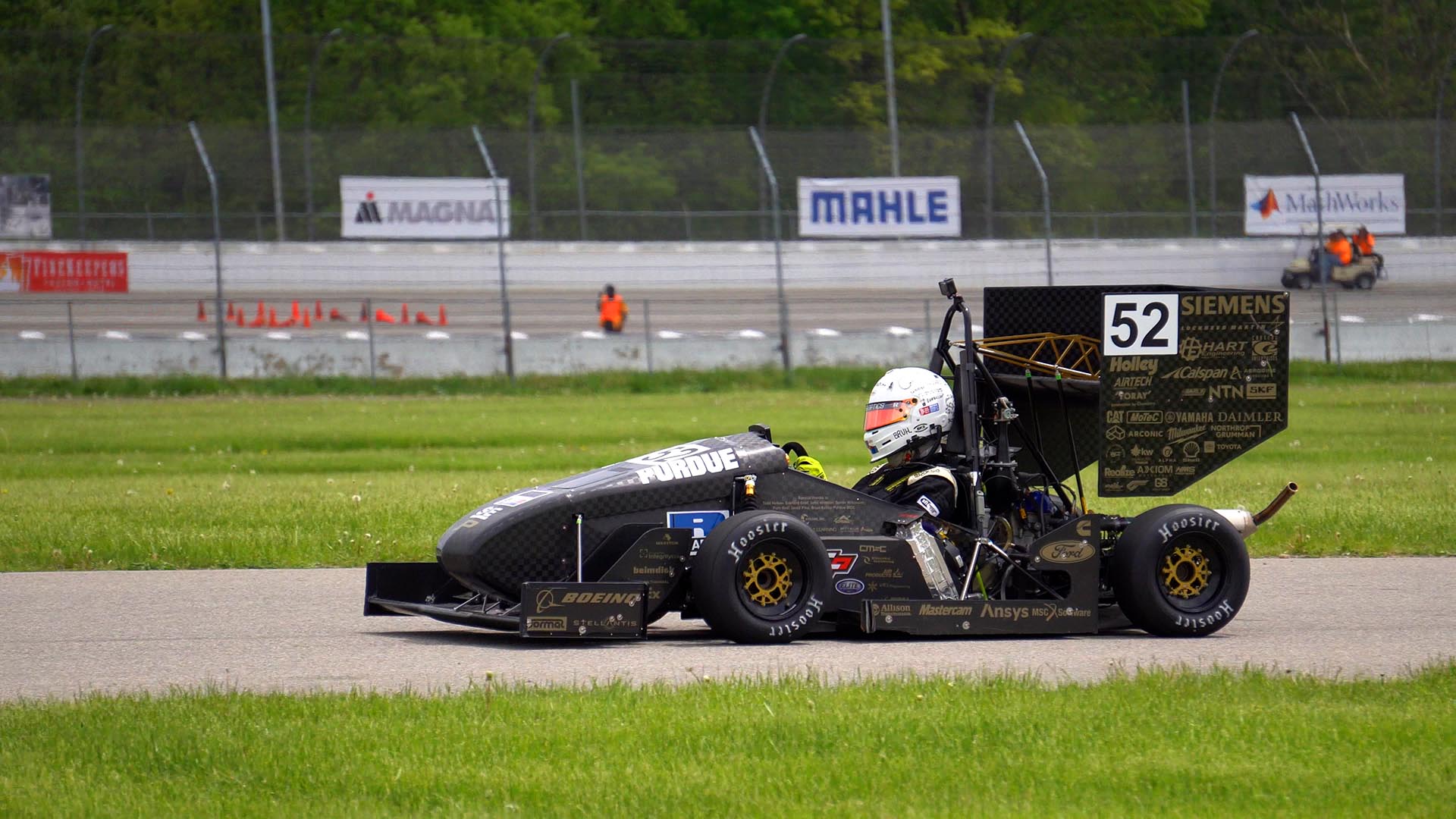 The grueling Endurance race comes at the end of a very long week for Formula SAE.

By this point in the weekend, the students themselves have completed their own “Endurance” race. Many of them have taken a week off from their internships to travel to the competition, and have worked all day, every day, to ensure their car is in the best working order. By the time of Saturday’s Endurance race, there are many bleary eyes and sunburned foreheads.  Nonetheless, Purdue Formula finished 9th in the Endurance race, and when combined with all the other events, they finished 6th place overall among 99 teams. They were also the fastest single-cylinder engine on the grid.

But remember that line about “slow and steady”? Purdue Formula were still not ready to give up! Based on what they learned in Michigan, they mustered the team and re-entered the car in another Formula SAE competition in June 2022. And the results speak for themselves:

“It’s great to see how you stack up against other universities,” says Tyler. “We’ve been putting in the work for several years leading up to this, and we were really able to put it all together this year. Bringing home 9 trophies between 2 competitions is an unforgettable experience!”

“I’m very proud of this team,” says Arpit. “They are so dedicated, and have spent so much of their own personal time working on this car. They decided this year to go for the podium, and they did it!” 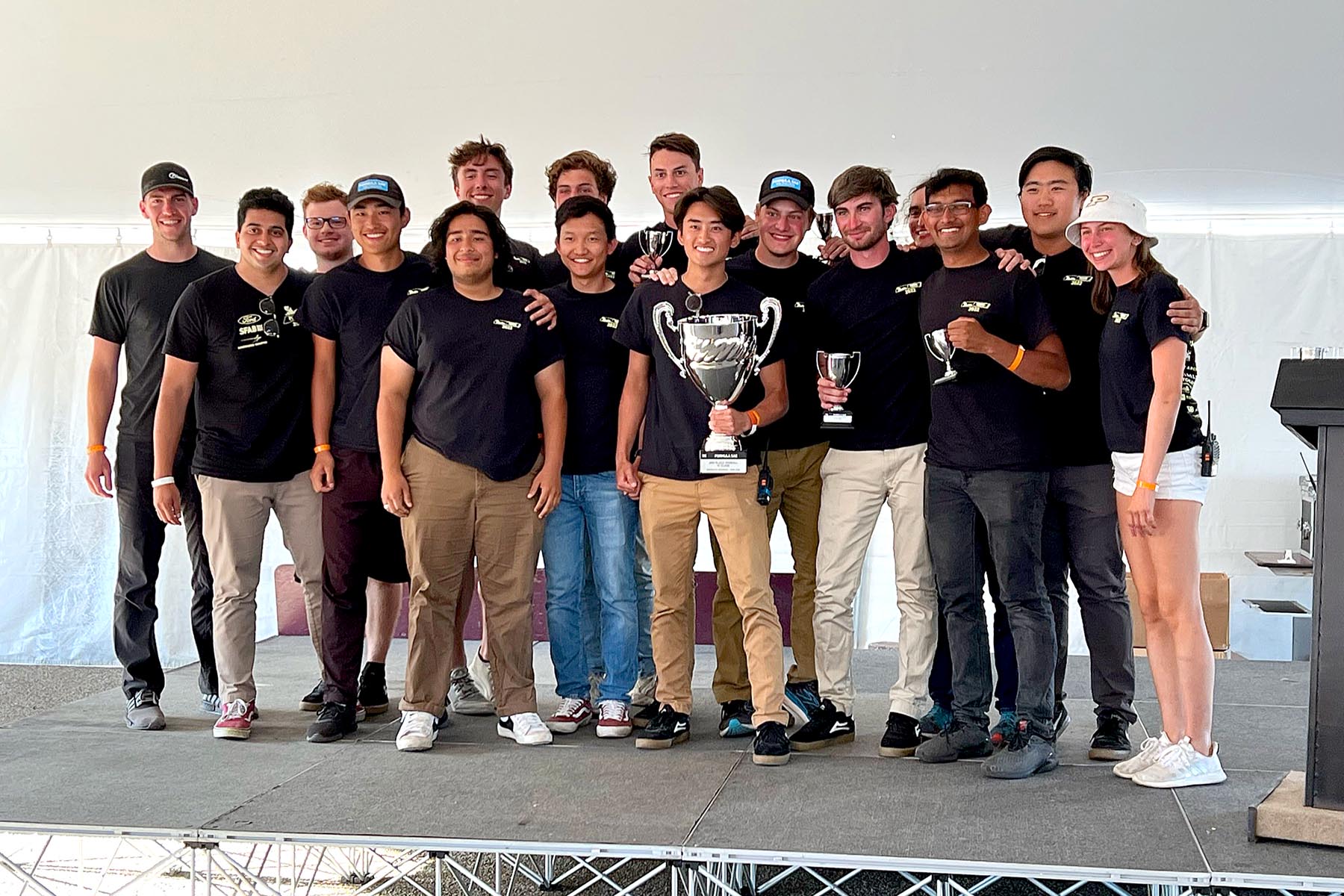 “I’ve always been a big believer in using motorsports as a springboard for your career,” says Todd Nelson. “The SAE student organizations provide an incredible experience for the students to develop their professional skills. They are, in effect, running a small engineering firm which requires them to apply everything they learn in the classroom to the very challenging and complex problem of designing and building a winning race car every year.”

“SAE has so many connections and networking opportunities,” says Tyler. “The judges and volunteers at these events come from Ford, Honda, Tesla, and other big companies. Both Arpit and I got our full-time jobs specifically because of our Formula SAE experience.”

“We get to apply everything we’ve learned in our engineering classes in a real-world setting,” says Arpit. “I’ve learned these equations, but now I get the chance to see them in action!” 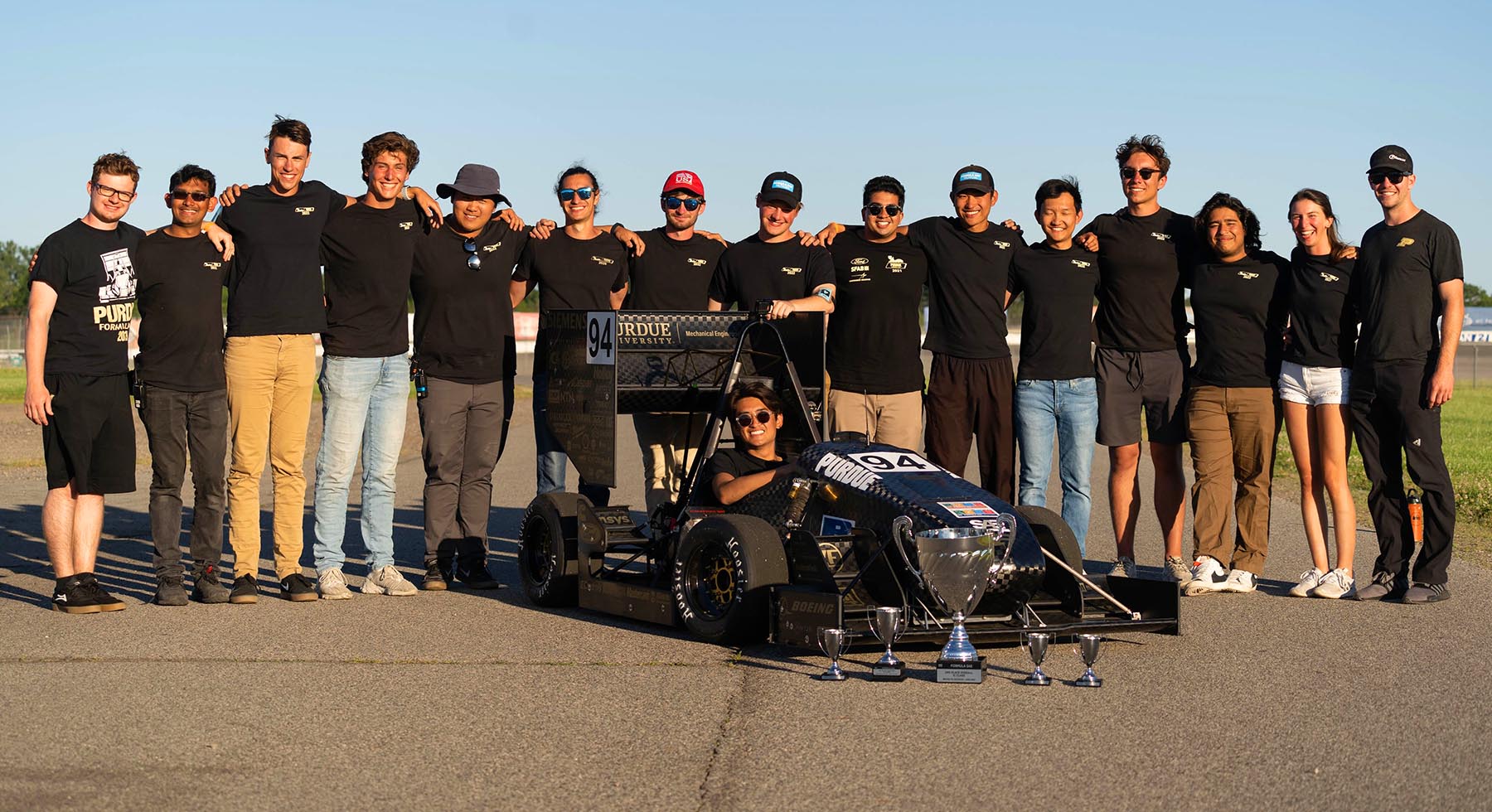