The pressure couldn't be any higher -- your first race as a top-level crew chief, and it's the Daytona 500. Your driver takes the lead, and manages to avoid crash after crash. How can you keep your team focused on the finish line in front of more than 100,000 fans? Actually, high-pressure scenarios like this are no big deal for Chris Gabehart. After all, if you can graduate from Mechanical Engineering at Purdue, you can accomplish anything!

“Graduating from Purdue was the hardest thing I’ve ever done,” admits Chris (BSME ’05).  “And I say that proudly!  They pushed me so hard to succeed at something I really wasn’t good at academically, while balancing so many other things.  Once I left Purdue, I realized there wasn’t a mountain I couldn’t climb.”

Like many motorsports enthusiasts, Chris’ journey in racing began at an early age.  He learned from his grandfather, Al Straub, who raced in NASCAR’s Grand Touring Division in the 1960s and 70s.  At age 10, Chris drove go-karts competitively in the World Karting Association, eventually winning several national championships.  His entire family would drive an RV from their Louisville, Kentucky home and support Chris in races across the country.

But they also encouraged Chris to think about his future.  “None of my family ever graduated from college,” says Chris.  “So from an early age, my parents pushed the importance of education, versatility, and developing a career.  Racing was my passion; it was what I wanted to do.  But it was only logical that I should look into furthering my education, and since race cars are engineering-based, mechanical engineering was a perfect fit.” 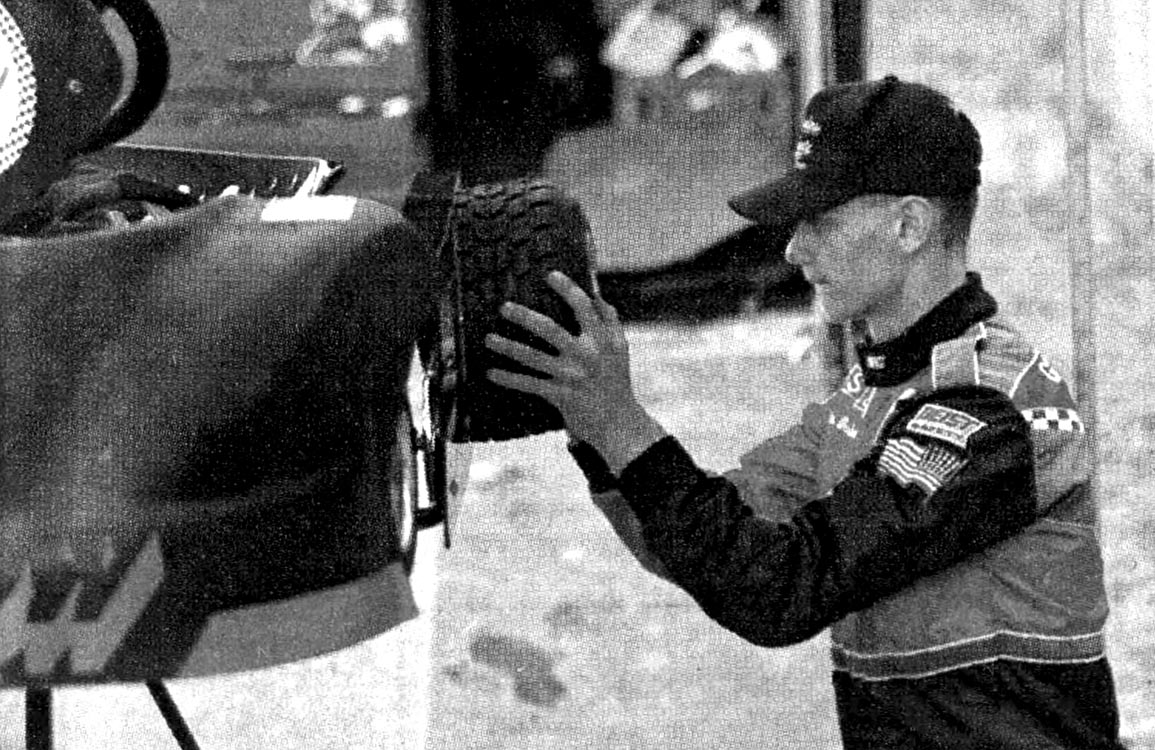 Choosing to attend Purdue also had the benefit of being close enough to Louisville that he could still race on the weekends.  “I admit I was a Monday-through-Friday student,” says Chris.  “In the racing world, if you don’t use it, you lose it.  So I continued to drive late-model races on the weekends, and went to class during the week.”

While juggling a racing career with an academic career sounds overwhelming, Chris says that having a singular focus actually helped him in the classroom.  “Most students don’t really know what they want to do in their careers,” he says, “but because I already had that passion for racing, I could see how things like thermodynamics and heat transfer applied to a race car.  I sat in many lectures where I would say, ‘Wow... that is going to help me in racing.’  And it has!”

He also learned the vital art of problem-solving.  “Purdue taught us how to think,” he says.  “In the racing world, no one ever 100% knows all the answers.  If they did, all 40 cars would be competing for a win!  We use science to make the best educated guess we can.”

Through his time at Purdue, Chris continued to have success as a driver, even winning the CRA Super Series championship in 2007.  But he and his family reached the point where driving alone could no longer support him financially.  That’s when he began transitioning into the business side of motorsports.  “Through my late-model racing, I became friends with Tom Busch, who is Kyle Busch’s dad,” says Chris.  “He liked what I was doing, and convinced me to come to work as an engineer for Kyle’s late-model team.  I knew those late-model cars really well, so it was a perfect way to get my feet wet as an engineer.  Then in 2012, I made the move to Joe Gibbs Racing to work on his Cup car.”

As one of the most stable and supportive teams in NASCAR, Joe Gibbs Racing offered Chris an environment where he could thrive.  “Joe Gibbs Racing has so many resources, and a great management staff and leadership group,” says Chris.  “I really had a huge support network around me.”

They also allowed Chris to advance in his career.  He served as crew chief in the Xfinity Series, the second level of NASCAR, winning nine races in the series.  Then in December 2018, Chris became the crew chief for Denny Hamlin, a veteran driver in the top-level Monster Energy NASCAR Cup Series.

Was Chris nervous about the taking the big chair?  “Yes, it is a bigger stage,” Chris laughs.  “But as Tom Busch told me, ‘They’re still race cars; they’ve got four tires, and the driver sits to the left of the driveshaft.’  Whether you’re driving go-karts or stock cars, racing is racing.  I’ve spent my whole career preparing for this, and I’m enjoying the challenge of it.” 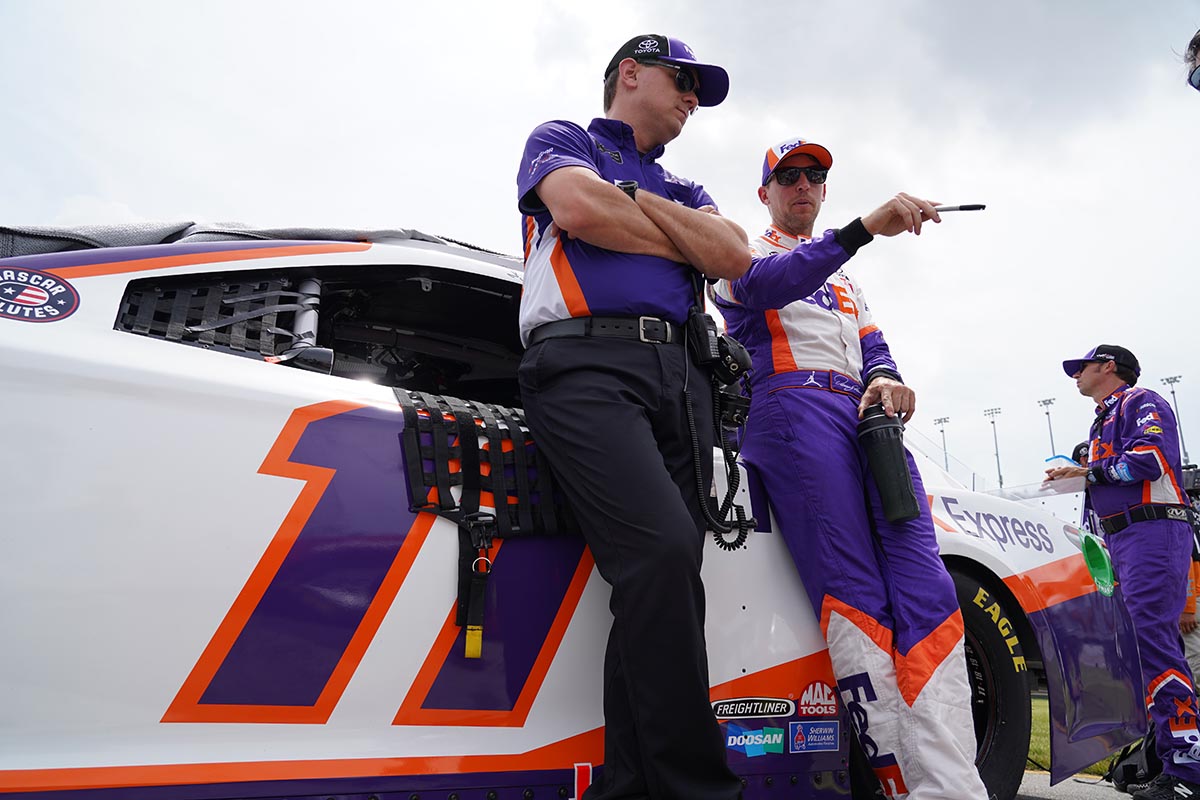 NASCAR’s biggest annual event is the very first event of the season: the Daytona 500.  The 2019 race was also the first opportunity Chris had to show he was up to the task of leading a team at the highest level of stock car racing.

“Again, Joe Gibbs Racing is tremendous,” says Chris.  “Their support network allowed me to compartmentalize and focus exclusively on the team, and making sure we accomplished everything we needed to leading up to that race.  It’s also awesome to have Denny Hamlin as a driver.  He’s a seasoned pro, and he knows what he needs in his race cars.”

Chris, Denny, and the team fought through numerous challenges, including a series of devastating crashes that eliminated more than half of the field.  After more than 500 grueling miles, Denny Hamlin’s #11 FedEx Toyota Camry crossed the finish line in first place, in Chris’ first ever race as crew chief.

“We were very fortunate,” recalls Chris.  “I have very fond memories from that race.  But really, it was a team effort. It was all about Denny Hamlin and Joe Gibbs Racing that weekend.”

As monumental as that win was, Chris prefers to talk about the team’s next win at Texas Motor Speedway, because of the challenges they had to overcome.  “We had a fast car that week,” says Chris.  “But we had a speeding penalty on pit road, which sent us to the back of the pack.  And then after Denny had fought back to the front, NASCAR cited us for having an uncontrolled tire just over the line of our pit box, so we had to go to the back again.”

Setbacks like this have the potential to ruin a team’s day, and crew chiefs often have to moonlight as psychologists.  “Think about the driver of that car,” says Chris.  “It’s 120 degrees in that little cocoon, and he can’t turn his head to see what’s going on around him.  He’s working his tail off driving, so we have to keep him motivated.  The pit crew is upset with themselves because they made a mistake, so we have to assure them that it’s not about perfection, but about overcoming the obstacles and doing everything to the best of your ability.”

The team rallied in Texas, and after some gutsy calls and heroic driving, the #11 car once again took the checkered flag in first place.  It was the first time since 2014 that a team had overcome two major penalties to win a race.  “We have built up a great trust with each other,” says Chris.  “Whether the situation is good or bad, we always shoot straight with each other.  A race like that really highlights what our team is about.” 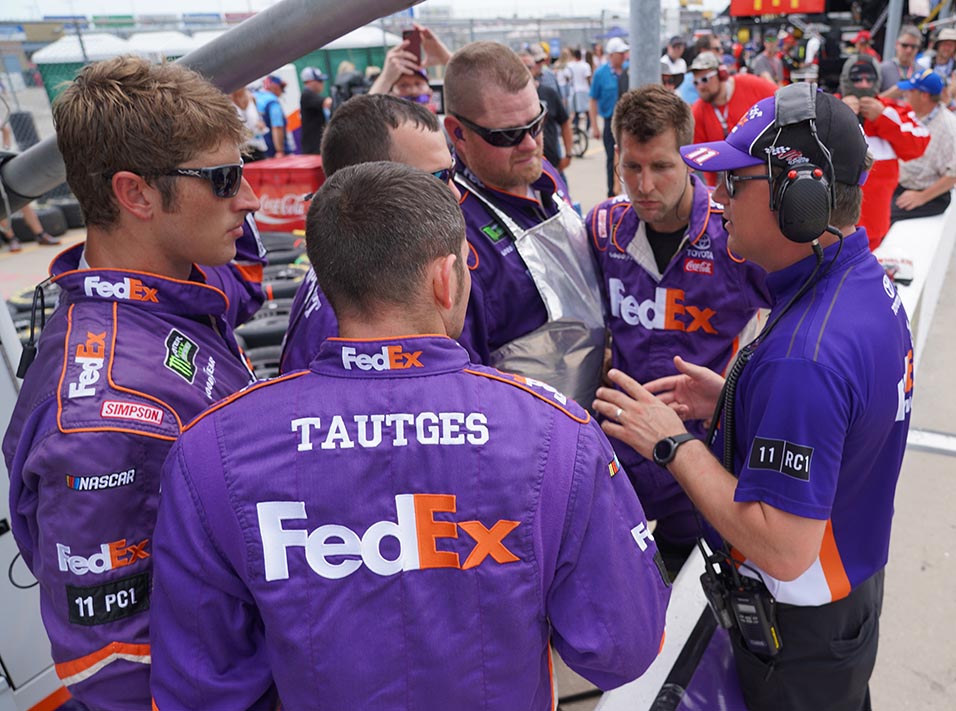 “I hold Purdue in such high regard,” reflects Chris.  “Obviously the rest of the country does too, since mechanical engineering is always ranked highly.  There’s no question that engineering got me into the job I’m in now.  They trained me in more ways than I could have realized at the time: the problem-solving skills, the analytics.  We do a lot of computer simulation at this level, and I learned how to do all that at Purdue.  All of those things were a huge asset to get me where I am today.” 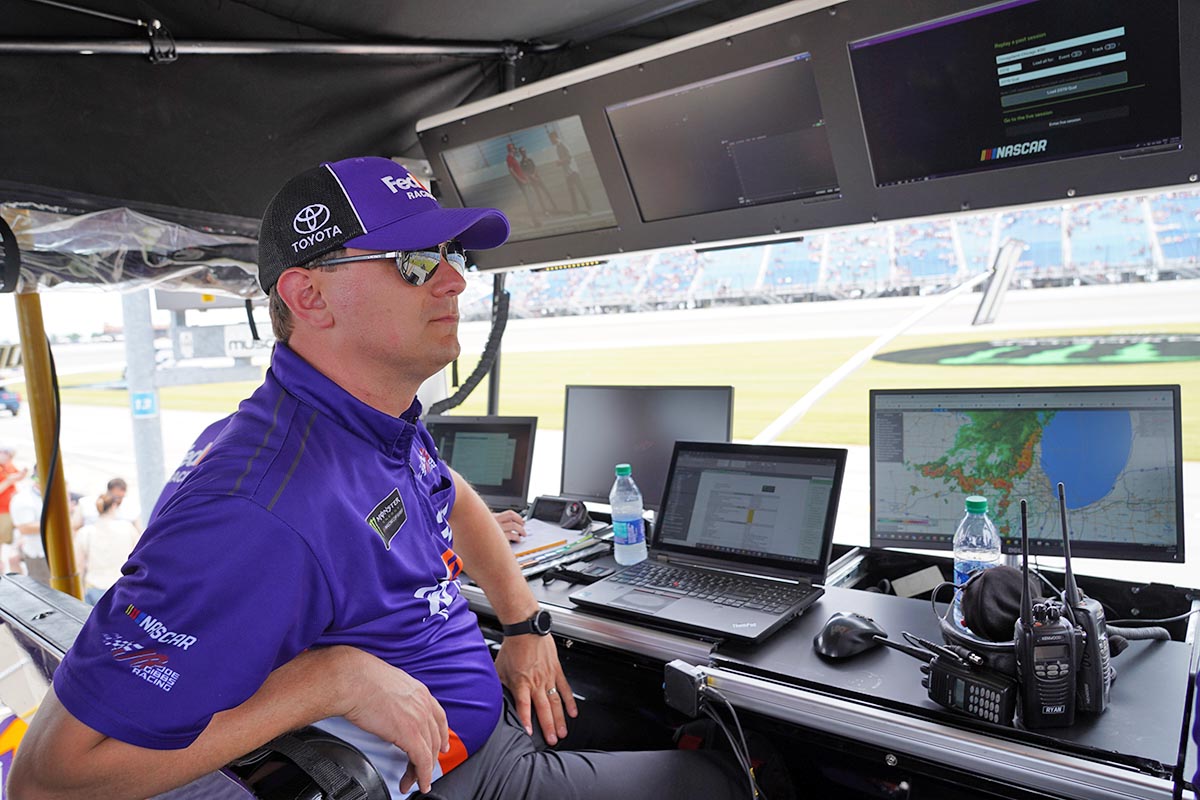 Thanks to Joe Gibbs Racing: https://joegibbsracing.com
and NASCAR Productions: https://nascar.com