Before NASA takes the “giant leap” of sending humans back to the moon, they are first taking the “small step” of launching an uncrewed Orion capsule as part of the Artemis I mission. And just like the Apollo missions, the Artemis missions rely heavily on Purdue Boilermakers. Mark Baldwin (BSME ’97) has been testing and refining the Orion capsule since 2009, and also helped design the manikins who are on board Orion’s first flight. 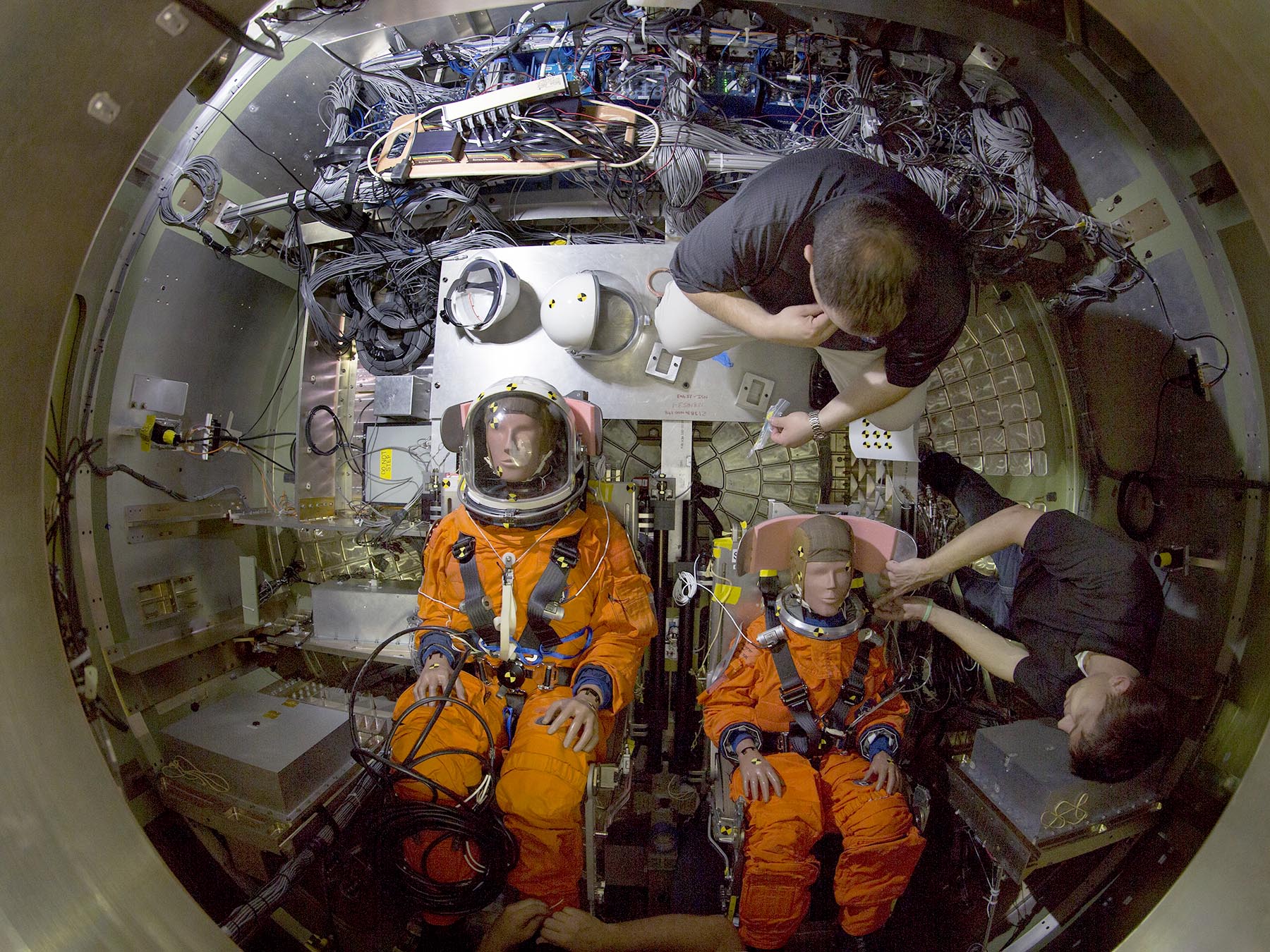 At Lockheed Martin, where Orion was designed and built, Mark serves as the Occupant Protection Lead. It’s a unique dual role, where he is responsible for both the integrity of the capsule itself, and the safety of the human beings who will soon be traveling inside. “Mechanical engineering is very challenging, and there’s no more complex and challenging system than the human body,” says Mark. “I love that my job allows me to combine those two things.”

As a kid growing up in Ohio, Mark tinkered with LEGO and other hands-on toys. After high school, he chose to attend Purdue, because their engineering program was the best fit for him. “I didn’t know exactly where I would end up,” he remembers, “but mechanical engineering seemed to be the most broadly applicable degree I could get.”

While studying dynamics and vibration, Mark also took classes in biology. “Purdue didn’t have a biomedical engineering school back then, but these biology classes intrigued me,” he says. “I ended up interning at a biomedical lab, and that’s what led me to this unique career path.”

He attended the University of Pittsburgh for his master’s degree, focusing on the biomechanics of wheelchair propulsion. He then worked for a company called Simula Technologies, where he had his first experiences with crash testing cars, trains, and even helicopters. After finishing a Ph.D. in orthopedics at the University of Denver, Mark gained a unique skillset that caught the eye of Lockheed Martin.

“Going from knee replacements to aerospace really is a giant leap!” he laughs. “But Purdue’s engineering curriculum really laid the foundation, and set me up quite well for each of those next steps.” 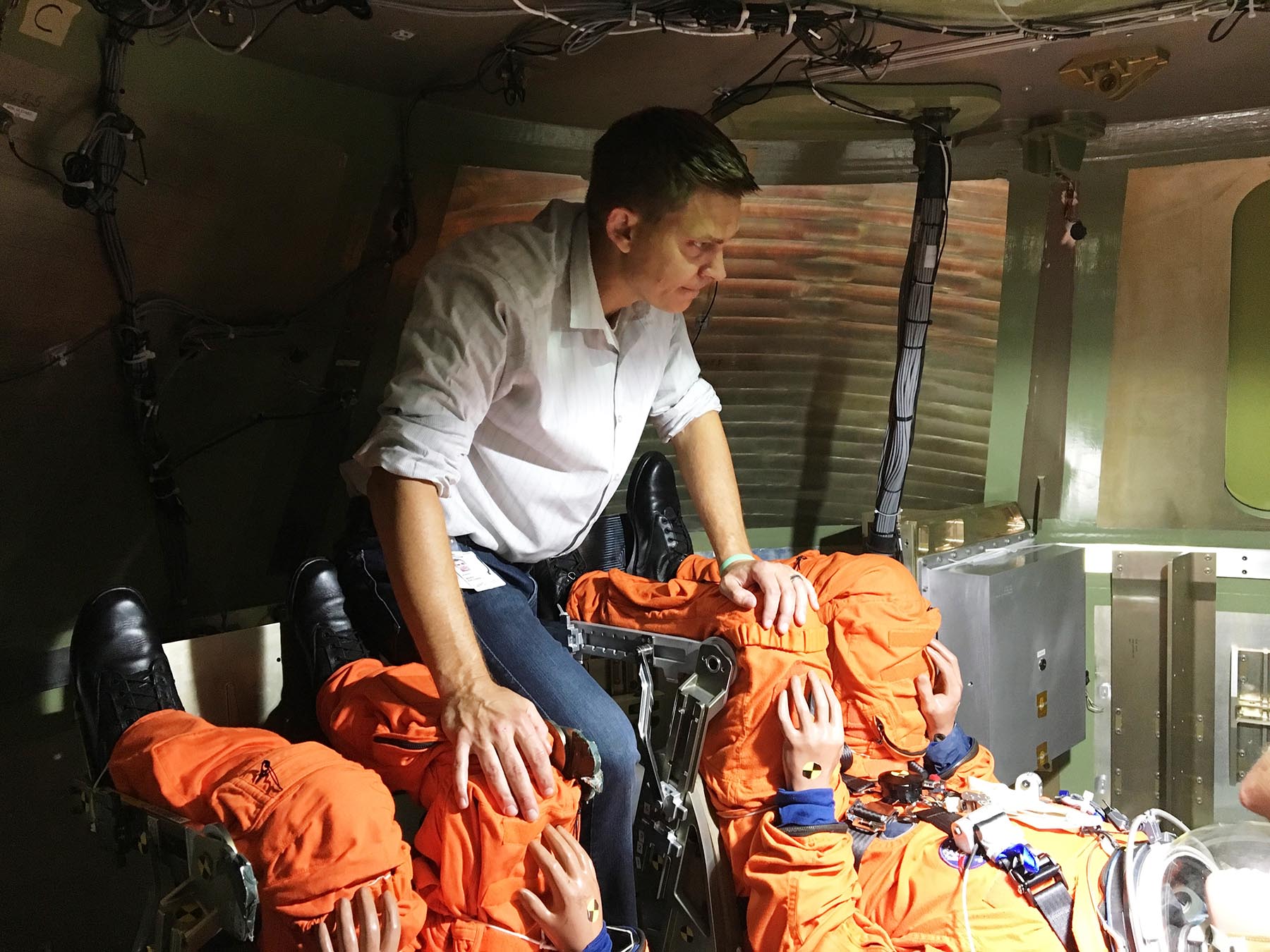 Mark Baldwin has a unique dual role, verifying the structural integrity of both the Orion capsule itself, and the safety of the potential occupants inside. (Photo courtesy Lockheed Martin)

When Mark joined Lockheed Martin in 2009, Artemis didn’t even exist yet; they were designing a capsule for something called the Constellation program. Constellation was eventually cancelled – but the Orion capsule’s design survived, and is now the only vehicle that will take NASA astronauts to the orbit of the moon.

At that time, all they had was a shell of the vehicle. “This is the way NASA typically works,” says Mark. “We start with low-fidelity prototypes, and build our way up to higher and higher fidelity vehicles, which have more sensors and more things to test.”

Step one was determining the stresses of the vehicle, especially upon water landing. Like Apollo, Artemis missions will conclude with the Orion capsule re-entering the earth’s atmosphere, deploying parachutes, and then splashing down in the Pacific Ocean. What kind of stresses will those impacts have on both the vehicle and its occupants? To find out, Mark’s team dropped an Orion prototype into a giant pool of water. 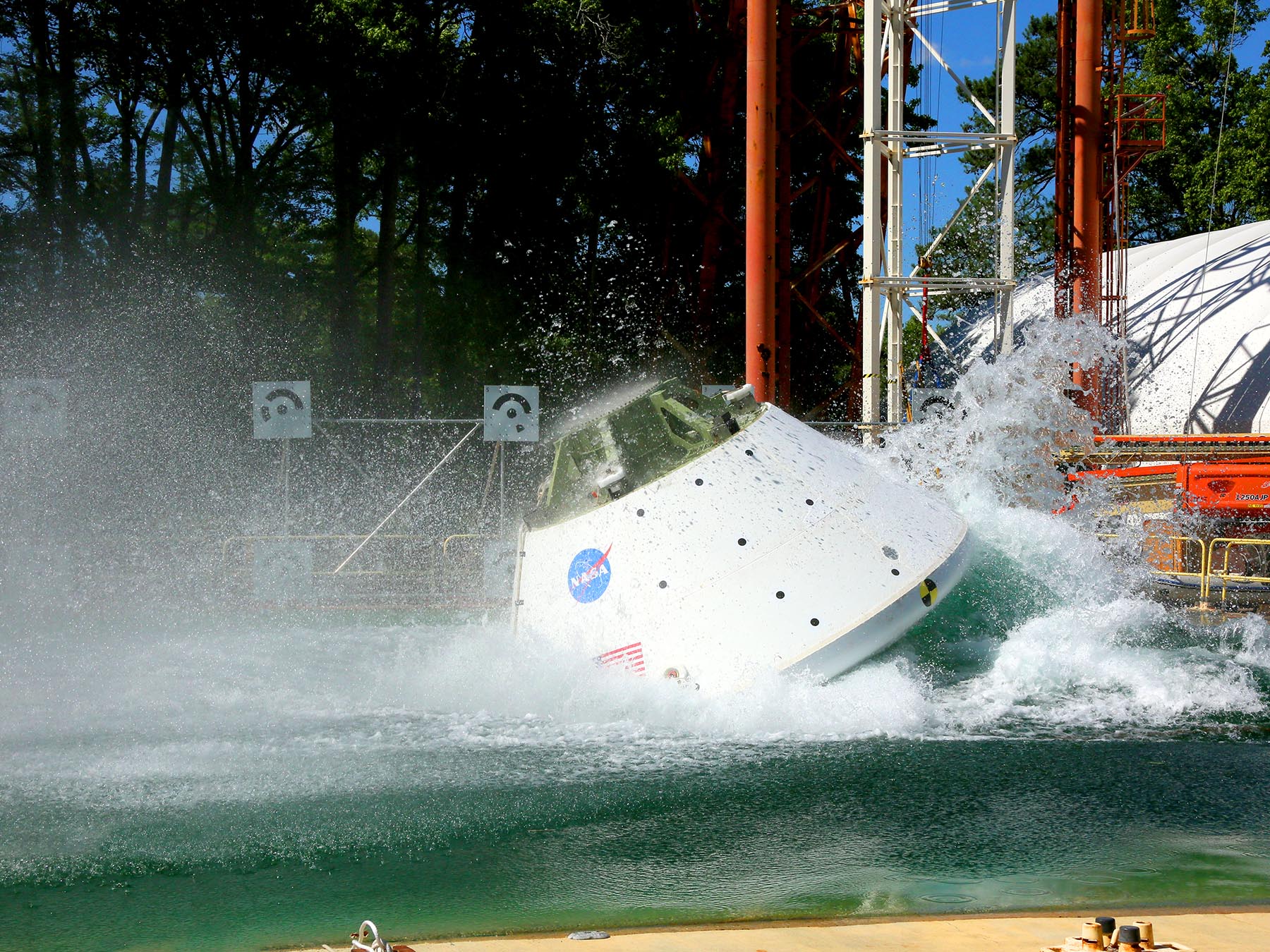 NASA and Lockheed Martin conducted dozens of drop tests of the Orion capsule, in a specially-built pool at Langley Research Center in Virginia. (Photo courtesy NASA)

“We must have done 42 different drops, from many different angles and heights,” he says. “Those early tests, we only had about 30 sensors on board. As the vehicle got more advanced in design, the tests became more complex also. For our final tests, we had 530 channels of data to parse through. We dropped the capsule at extreme angles and knew the last test would flip it upside-down.”

Once they confirmed the structural dynamics of the vehicle, Mark put on his other hat as biomechanical engineer, to confirm the safety of its human occupants.  Orion has some pretty strict requirements for keeping the astronauts safe, and it all starts with the seat.

“Those seats have to accommodate astronauts of every kind – from four-foot-ten to six-foot-four, from 95 pounds to 243 pounds,” he says. “We have to use very specific energy attenuators, to cushion the forces of both launch and landing. We have to factor in the condition of the spine, because astronauts tend to lose bone density while in zero-gravity. And on top of all that, the seats have to fold up and stow away, because Orion will serve as the astronauts’ living quarters as they travel!”

And there are other factors to consider. For example, during the vibration of launch, could an astronaut read and operate the control panels? For Mark, there was only one way to find out. “I designed a vibration test at Johnson Space Center,” he says, “We had a seat and control panels on a shaker table to simulate all sorts of conditions. I volunteered to be the first participant, because I didn’t want to put any astronaut lives at risk. For two days I was strapped in there, wearing a Shuttle-era spacesuit, sweeping through all frequencies and amplitudes of vibration. I didn’t get sick or injured, so NASA felt comfortable putting their astronaut candidates through the same test!”

After more than a decade of testing, Mark feels confident that Orion will succeed in its mission. “We’ve characterized everything we can characterize,” he says. “We have mountains of data from every possible scenario. People’s lives are at stake, so we had to do as thorough a job as possible.” 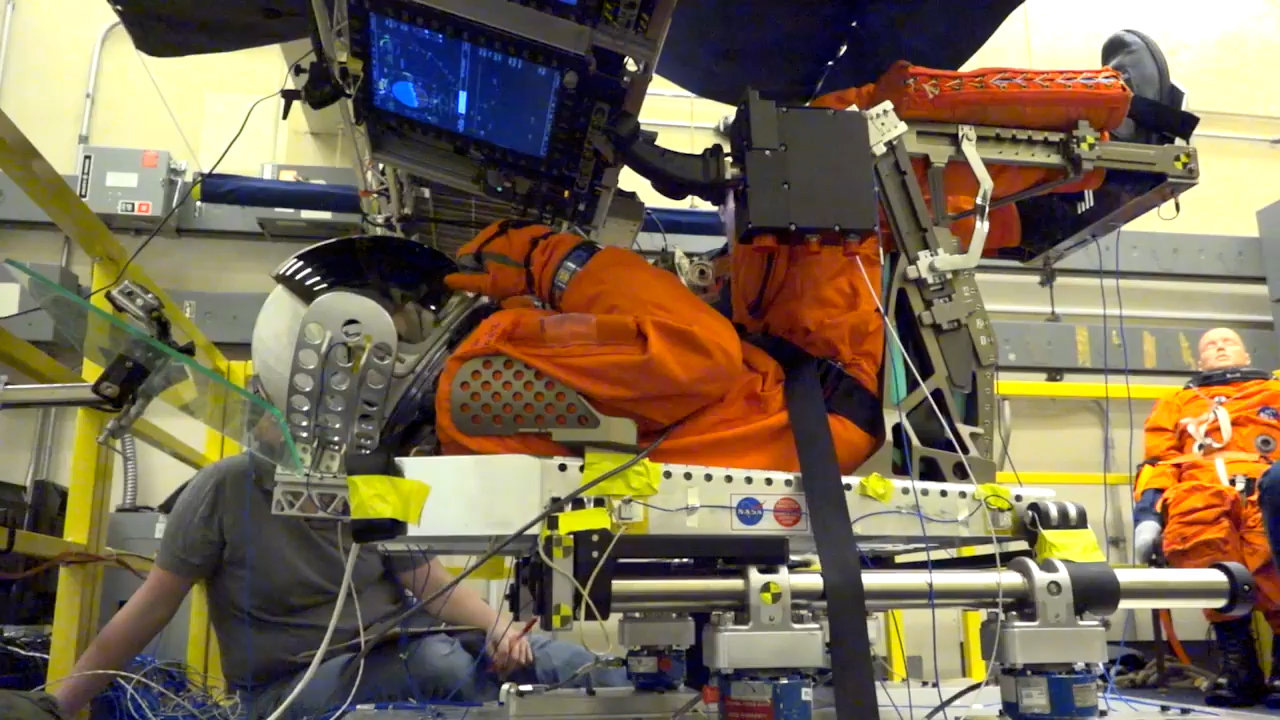 Mark Baldwin subjected himself to multiple vibration tests, to determine whether he could read and operate control panels under simulated launch conditions. (Photo courtesy Lockheed Martin)

While the first Artemis mission is uncrewed, the Orion capsule does have occupants. A manikin named Moonikin Campos sits in the commander’s seat, dressed in the first-generation Orion Crew Survival Suit, sitting in the specially-designed seat, and equipped with multiple acceleration, vibration, and radiation sensors – all of which Mark has had a hand in designing.

“Our team has spent so much time developing the seat, developing the restraints, developing the suit, integrating the payload,” says Mark. “Many days it felt like we would never get to the finish line. But to see something that you built actually go up into space is pretty amazing.”

“It’s a 25-day mission, but I’m most keenly interested in the first two minutes and the last two minutes,” says Mark. “We want to see what the vibrations are like at liftoff; but we also want to see what the stresses are like when the parachutes deploy, and when the capsule hits the water. Once we recover the capsule, then the fun begins of parsing through all the terabytes of data our manikins have collected. Hopefully they confirm everything we’ve established through years and years of testing and analysis.”

After this mission comes the next “giant leap"... having people aboard.

“My job’s only going to get busier for Artemis II,” says Mark. “With people on board, there are many more scenarios we have to plan for. What if we have to abort, and land in the Atlantic? Could the astronauts survive rough seas? What if there is a micrometeorite strike, and the cabin depressurizes? Could the astronauts live in their space suits for six days? And then there are the practical things: how will the astronauts function day-to-day in Orion? Will they easily be able to eat, drink, and sleep? It’s going to be a really exciting time.”

As Mark looks forward to the future of human spaceflight, he’s also looking back at the steps it took to get him here. “Honestly, I never expected to be working in aerospace,” he admits. “Engineers who work in this industry deal with a lot more risk, but the fact that their work is launched into space also has a certain grandiosity and wonder you can’t get in any other industry.”

“This is an amazing time to become an engineer,” he says. “We’re just at the beginning of a new golden age of spaceflight. I’d encourage students to keep their minds open to new possibilities. Try challenging yourself with something that stretches you just a little bit, because you never know where it may take you.” 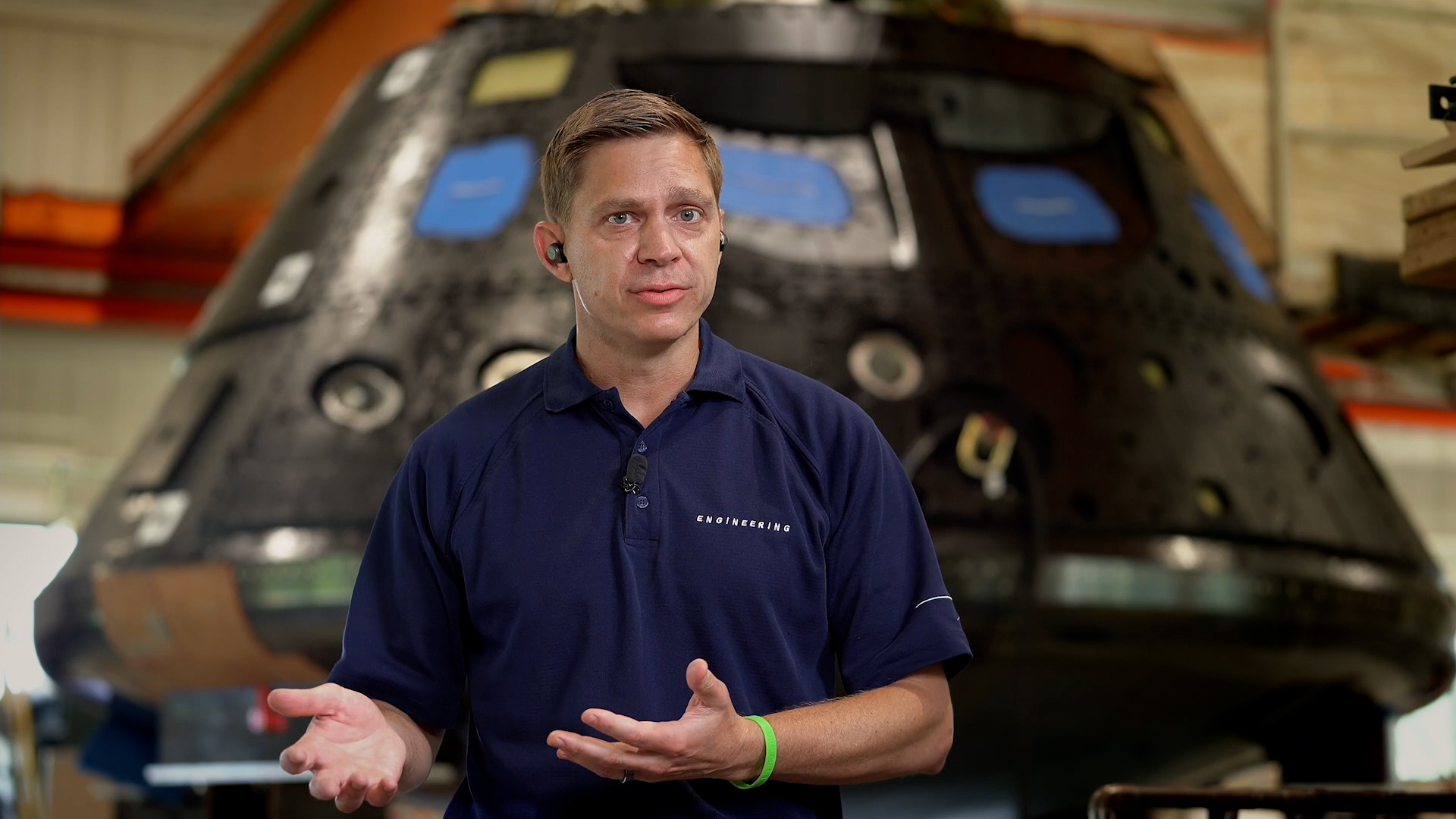 The launch of Artemis I fulfills many years of work for Mark Baldwin, and his Orion team at Lockheed Martin and NASA. (Photo courtesy NASA)