Motorsports has a way of testing an engineer's mettle. Sure, you've worked hard and prepared all year for this -- but when everything breaks and is covered in dirt, can you fix it in 30 minutes?

That's the challenge behind Baja SAE, one of the annual Collegiate Design Series sponsored by the Society of Automotive Engineers (SAE).  Students design their own off-road race car, build it from scratch, and then compete against other universities in a series of challenges.

"I've always been involved with four-wheelers and dirt bikes," says Alex Gross, a senior in mechanical engineering, and the team's chief engineer.  "When I visited Purdue and saw the Baja shop in the mechanical engineering building, I knew that's what I wanted to do.  I've been on the team every year since."

"The first thing we do is come up with our design goals," says Alex. "We analyze our past competitions, and see how we can improve on those results."  This review process typically begins over the summer, even before the school year begins.  Once students return to class, they assemble their team, and begin to design the car in earnest.  Subteams specialize in the chassis, suspension, drivetrain, and driver interface.  Apart from a few stock components, such as the engine (all teams are required to use a standard one-cylinder Briggs & Stratton engine with about 10 horsepower), students are responsible for creating everything from scratch.  "About 90% of the car is designed and built by us," says Alex.

Once they finalize the design -- typically by December -- the manufacturing process begins.  Students weld the chassis, mold the carbon fiber, complete the wiring, tweak the suspension points, and add essentials like the steering wheel, seat, and safety systems.  By springtime, their Baja car is complete and ready for some shakedown drives before competition.

2019's Baja SAE competition took place at a motocross track in Rochester, New York.  More than a hundred university teams attended, originating from all corners of the USA, Canada, Mexico, Brazil, Venezuela, and even as far as India.  They set up camp with their trailers, toolboxes, and most importantly, their completed race cars.

"Every competition begins with a design presentation," says Alex.  "We describe our vehicle to industry engineers from Polaris and other companies, and they critique every part of it, asking us about our design process. Then SAE conducts a technical inspection, going over every inch of the car to make sure we followed every rule in the rule book.  That can take up to two hours.  It's a lot of pressure -- and that's before we even get permission to drive the car on the track!"

At the dynamic events, the fun really begins.  "We began with acceleration," says Alex, "to see how fast we can go from a dead stop; and braking, to confirm that all four wheels lock up. Then we do a hill climb, a maneuverability course to test our steering, and finally the suspension and traction test, which is notorious for destroying cars.  And sure enough -- the first obstacle destroyed our front end.  But we scored points in every dynamic event, which was a huge goal of ours this year." 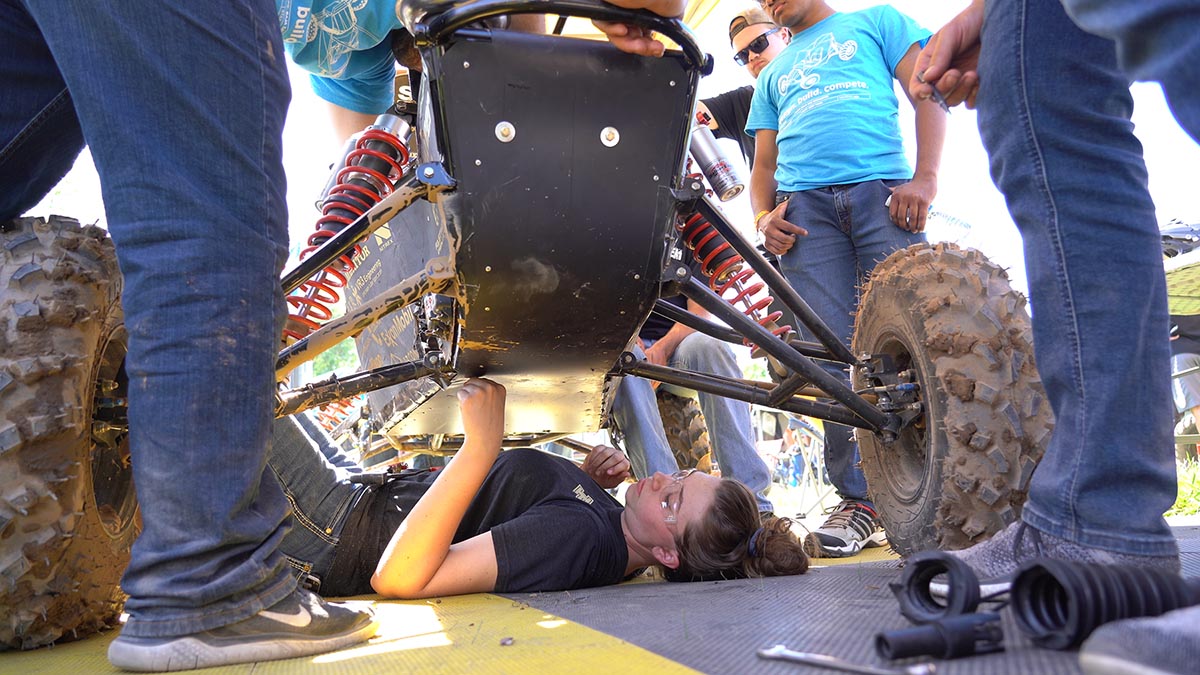 The team worked through the night, re-welding their steering rack to be ready for the four-hour endurance race the next day.  But the best laid plans...

"You have a plan coming in," laughs Alex, "but then things break, and you have to just fix things as fast as possible.  And it's always the thing that you don't have enough spares of!"  Purdue's endurance race started off forebodingly, as a bumpy course obstacle broke their steering rack (again), which meant they had to fix it (again).  Students swarmed the car in their makeshift pit, loosening and tightening bolts, drilling holes, bending pipes, and in some cases, using duct tape to hold things in place.  After about 30 minutes of manic activity, a second driver hopped in the car and returned to the track to complete more laps.  But a second obstacle (giant tractor tires) proved too difficult, and the team were eventually black-flagged for the balance of the event.

Send It Back Out There

It's tempting to view your success in Baja solely through the race results.  But Alex doesn't see it that way.  "Everything is a learning curve," he says.  "Baja is an iterative process, so everything we learned this year, we will carry forward for next year's team."

Alex also sees something special in the fraternity of other Baja teams.  "It's awesome; it's like a giant community," he says.  "We've loaned teams everything from extension cords to welders to tires, and probably borrowed just as many things.  It doesn't matter if you're the best team or the worst team, everybody is willing to help."  He also loves the rugged simplicity of the Baja vehicle that you can't find in the other SAE racing series, such as Formula or Electric.  "It just fits me a lot better.  I don't want something that's super complex; if I design it myself, then I have to be able to fix it myself.  If something breaks, I'm not going to stress over spending the next four hours to fix it.  Put the steering rack in a vise, bend it back straight, and send the car back out there!"

Most importantly, Baja encourages that most sought-after of job skills: teamwork.  "It's a full year commitment," says Alex. "During the school year, these guys spend 20 to 30 hours a week in the shop.  A lot of them have summer jobs and internships, and they took time off to come all the way to Rochester just to see it through to the end."