There's something unique about the high-pitched whine of a fully electric race car, accelerating from 0 to 60 mph in four seconds, showing off insane amounts of torque instantly. "There's a lot of hype about electric vehicles taking over," says Matthew Flanagan, president of Purdue Electric Racing. "And after being involved with this car, I can say I totally believe it!"

Every year, Purdue engineering students design and build their own single-person race cars, competing against other universities in events organized by the Society of Automotive Engineers (SAE).  In 2013, Formula SAE created an Electric division, with cars powered exclusively by batteries.  This year’s Purdue Electric Racing team successfully competed in two events, achieving their best finish ever.

The process begins in the summer, gathering 40-60 students from mechanical engineering, electrical and computer engineering, and aeronautical engineering.  Then they break into subteams to begin the preliminary designs, based on their areas of expertise.  For example, the suspension and chassis teams design the foundation of the car, while the aero team uses carbon fiber to build a sleek, aerodynamic body shell. “It’s not like we’re cutting and pasting,” says Flanagan.  “We’re actually developing everything new from scratch.”

For electric cars, however, the battery is everything.  Purdue has chosen a 300-volt lithium-ion battery module, which weighs 160 pounds -- more than a quarter of the car’s total weight.  These heavy-duty batteries also introduce safety concerns unique to this form of racing.  For example, everything must be waterproof to avoid short-circuiting; at competitions, cars sit in lawn sprinklers for 10 minutes to test this.  And because of the volatile nature of lithium-ion batteries, everything must be cooled with fans or radiators.

Students also design the complex electronics that control the entire car.  When the driver pushes the accelerator pedal, processing modules convert the data to digital signals, which are sent to the car’s main computer, and then converted to action in the motors.  While this presents a huge challenge, it also creates some unique opportunities.  “We designed this module to communicate over Wi-Fi,” says Benjamin Ng, computer engineering student and the team’s chief electrical engineer.  “When they push the pedal down, we see it live on our laptops, and can visualize the data instantly.”

Purdue Electric Racing also has a secret weapon: the Bechtel Innovation Design Center, which they have called home since it opened in 2017.  “It’s completely changed our team,” says Flanagan.  “They have a massive computer lab with all the software for us to design parts, and then a fabrication and machine shop to build them right on site.  They even have meeting rooms for our business teams, and break-out rooms for the subteams to do high-level design work.”

After manufacturing, the testing phase begins.  “We’ll take the car out onto the Ross-Ade Stadium parking lot, or the Grand Prix track,” says Flanagan.  “If we see any problems, we’ll go back to design and manufacturing to fix them, and then re-test.  After we’ve gone through this loop and gotten the car to best we can get it, it’s time to compete.” 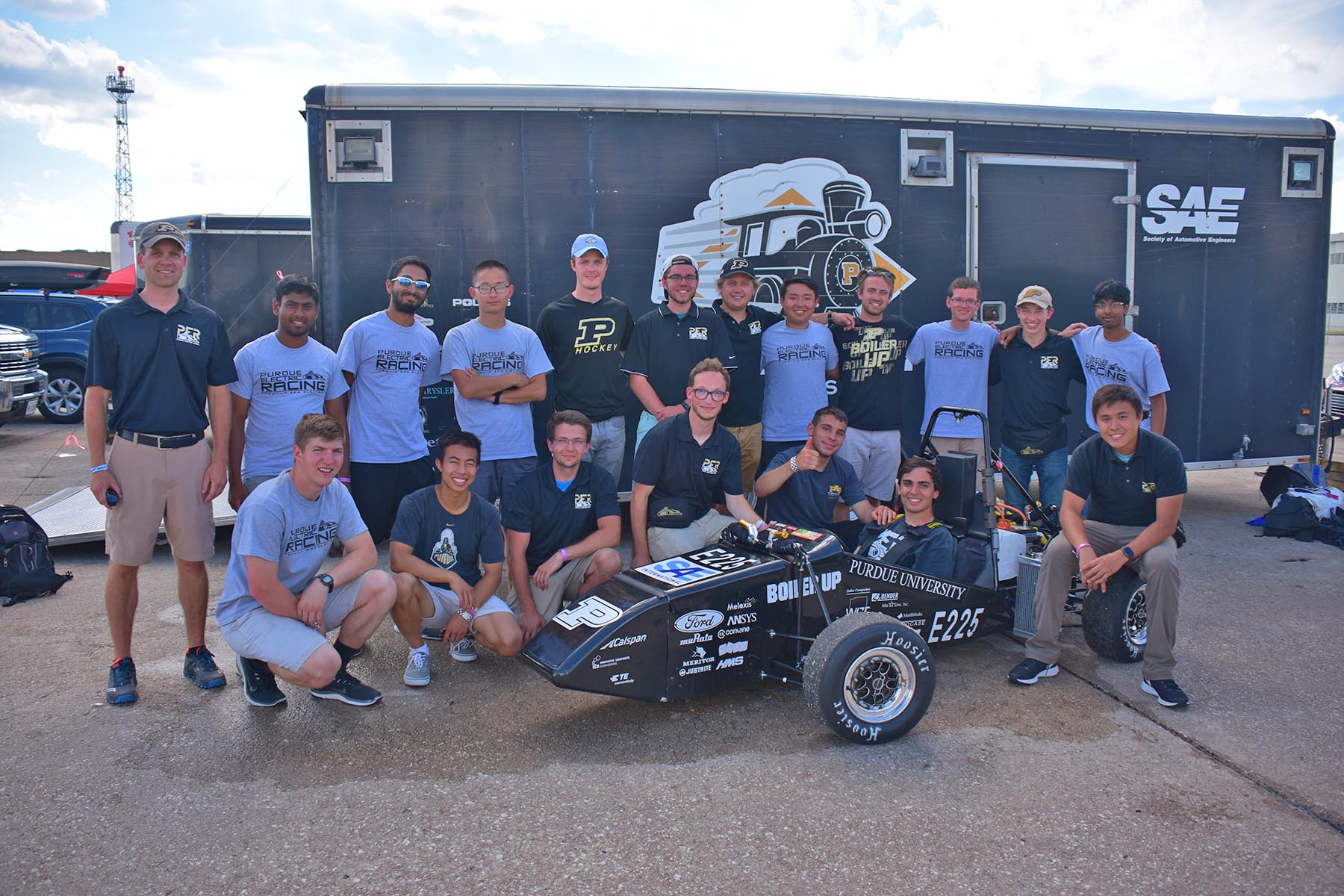 This year, Purdue Electric Racing entered two competitions.  At Formula North in Barrie, Ontario, the team’s car passed technical inspection for the first time in Purdue’s history.  “That in itself is a huge accomplishment,” said Todd Nelson, the team’s faculty advisor.  “Because electric cars are so much more complex than internal combustion, it’s difficult to get the greenlight to even compete in dynamic events.  The fact that their car passed with flying colors is a huge point of pride for us.”

Dynamic events include acceleration, where the car’s straight-line speed is clocked; skidpad, where they put their turning radius to the test; and autocross, an individual time trial on a pre-arranged road course.  Purdue achieved first place in both acceleration and skidpad, and second place in autocross.  Finally, all cars compete in an endurance race, where they share the course and attempt to run 20 laps in as short a time as possible.  Unfortunately, Purdue’s cooling system malfunctioned, forfeiting the endurance portion of the competition.  However, their strong overall showing (3rd place) was the best ever for a Purdue Electric Racing team.

Then came the big competition: Formula SAE Electric in Lincoln, Nebraska.  More than 100 university teams, both electric and internal combustion, gathered on a giant concrete airfield to compete against the clock and each other.  Once again, Purdue performed well in the preliminary events: 3rd in acceleration, 2nd in autocross, and 1st in skidpad.  Students from other schools frequently visited Purdue’s trailer to discuss their designs; one even took a picture of the car for his computer’s wallpaper.

However, the final endurance race stymied the team once again.  After completing the first lap, the car suddenly stopped running.  Because of the safety concerns unique to electric vehicles, course stewards were not allowed to touch the body of the car, and after two minutes of restart attempts, the team’s day was over.  They finished 7th overall.

“I felt so bad for everyone,” says Nelson.  “They put in so much work, and achieved so much.  Even though we had a glitch, just that one shakedown lap we completed was still the fastest electric lap recorded that day, and was one of the top 20 fastest of all teams, even with the internal combustion cars. Regardless of how the final race finished, the real victory was all the work they put into the design, the testing, and the overall teamwork.  This is the best Purdue Electric Racing team we’ve ever had.”

Team president Matthew Flanagan agrees.  “My favorite aspect is the design work,” he says.  “When I first joined as part of the electronics team, day one I was designing my own circuit boards, and saw them through the entire design, fabrication, and testing process.  That’s something you can’t get in any other club.”

“At Purdue Electric Racing, you get right into it,” says chief engineer Benjamin Ng.  “It’s not like a classroom, where you’re sitting in a lecture, and maybe have a lab that isn’t too interesting.  These are actual, real, tangible problems that we are solving. We get to solder something, put it together, and see it work.  It’s pretty rewarding; after all the time you put in, you get a car that runs fast, and is pretty kick-ass!”