“I’ve driven sports cars most of my life,” said Daniels, “but that was the most fun I’ve had all month!”

Motorsports is a proud tradition at Purdue, as evidenced by the annual Purdue Grand Prix, the spectacle of go-kart racing which has been held on campus since 1958. More recently, Purdue has sponsored the EV Grand Prix, an event for electric go karts held at the Indianapolis Motor Speedway before the Indianapolis 500.

“These electric cars have instant acceleration,” said Daniels.  “But it’s a little different, because they make so little noise.  They get around pretty quick!”  Despite never having driven a car at the track, Daniels clocked several laps under 30 seconds, as unofficially timed by students.

However, the cars test-driven by President Daniels are about more than just going fast.  Every year, Purdue Engineering students design and build these vehicles from the ground up, competing against other universities in events organized by the Society of Automotive Engineers (SAE).  In addition to the Electric team, the Baja team builds a single-seat off-road vehicle; and the Formula team builds an internal-combustion mini-Formula race car which goes from 0 to 60 mph in less than four seconds.  The teams attract hundreds of students from Mechanical Engineering, Electrical and Computer Engineering, and Aeronautics and Astronautics. They also have business teams to organize budgets and recruit sponsors.

“It’s a year-round process,” said Matthew Flanagan, senior in Electrical and Computer Engineering, and the current president of Purdue SAE.  “Each team begins in the summer,  breaking into subteams to begin the preliminary designs.  For example, the suspension and chassis teams design the foundation of the car, and the aero team uses carbon fiber to build a sleek, aerodynamic body shell.  It’s not like we’re cutting and pasting; we’re actually developing everything new from scratch.” 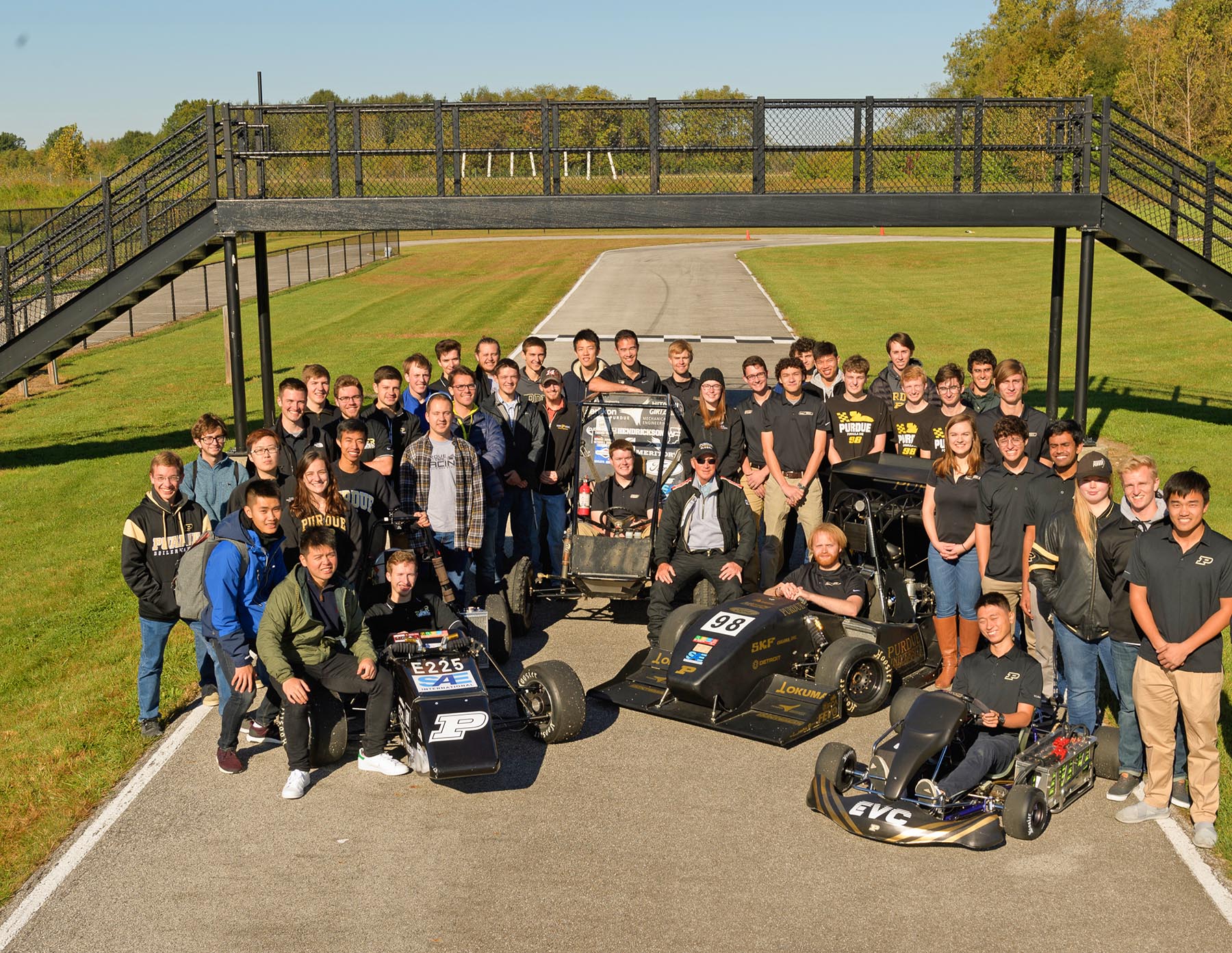 Once the designs are finalized, the teams begin manufacturing, which involves everything from 3D-printing to welding to making carbon-fiber molds.  Then they test their vehicles to shakedown any issues, going back to tweak their design where necessary.

Then in the spring, it’s off to international SAE competitions, where Purdue teams have had tremendous success.  For example, the Purdue Formula team finished 14th out of 120 teams at the 2018 contest at Michigan International Speedway.  The Electric team finished 7th at a similar event in Lincoln, Nebraska.

“We wanted to show President Daniels how much work went into the design of the cars,” said Todd Nelson, Purdue SAE’s faculty advisor.  “These students are in the workshop many long nights and weekends, and for many of them, it’s the capstone project for their engineering degree.  The documentation that goes into the design is just as important as how it performs on the track.”

“This is all student-built equipment, student-run teams,” said Daniels.  “It’s so impressive.  I’m thrilled and inspired by Purdue Engineering in all its forms, and this is just a great example among many.”