Under faculty advisor Karthik Ramani, the Purdue Table Tennis club has had a surprise resurgence, winning a recent tournament and looking forward to a bright future for Boilermaker ping-pong.

It’s a Sunday afternoon, and Multipurpose Room 5 at the Purdue Co-Rec is filled with the unique “ping-pong” rhythms of plastic balls, wooden tables, and rubber paddles. Singles players are practicing their serves, while an enthusiastic doubles game sees players dashing in and out to make room for their teammates. It’s clearly competitive, but all the players seem more focused on having fun.

“I used to play casually back in India,” says Karthik Ramani, Donald W. Feddersen Distinguished Professor in Mechanical Engineering. “After being here a few years, I came back to it. I wanted to improve my game, so I kept asking people to play.”

After COVID-19 isolated most of the student population, most were happy to get back to a communal activity like table tennis. So when the Purdue Table Tennis club was resurrected in Fall 2022, they asked Ramani to be their faculty advisor.

“We had a callout, and 120 people showed up,” says Ramani. “It worked out perfectly! Now there are always good players to play with!”

Ramani describes how his engineering background helps with the game: “Table tennis is all physics. Players apply many different spins to the ball, up to 8,000 rpm – and that combination of mechanics, dynamics, and fluids sends the ball in all sorts of different directions. Top players can hit the ball faster than 100 km/h, so your reactions are less about watching where the ball goes, and more about anticipating it in a split second based on the angles and the rotations.” 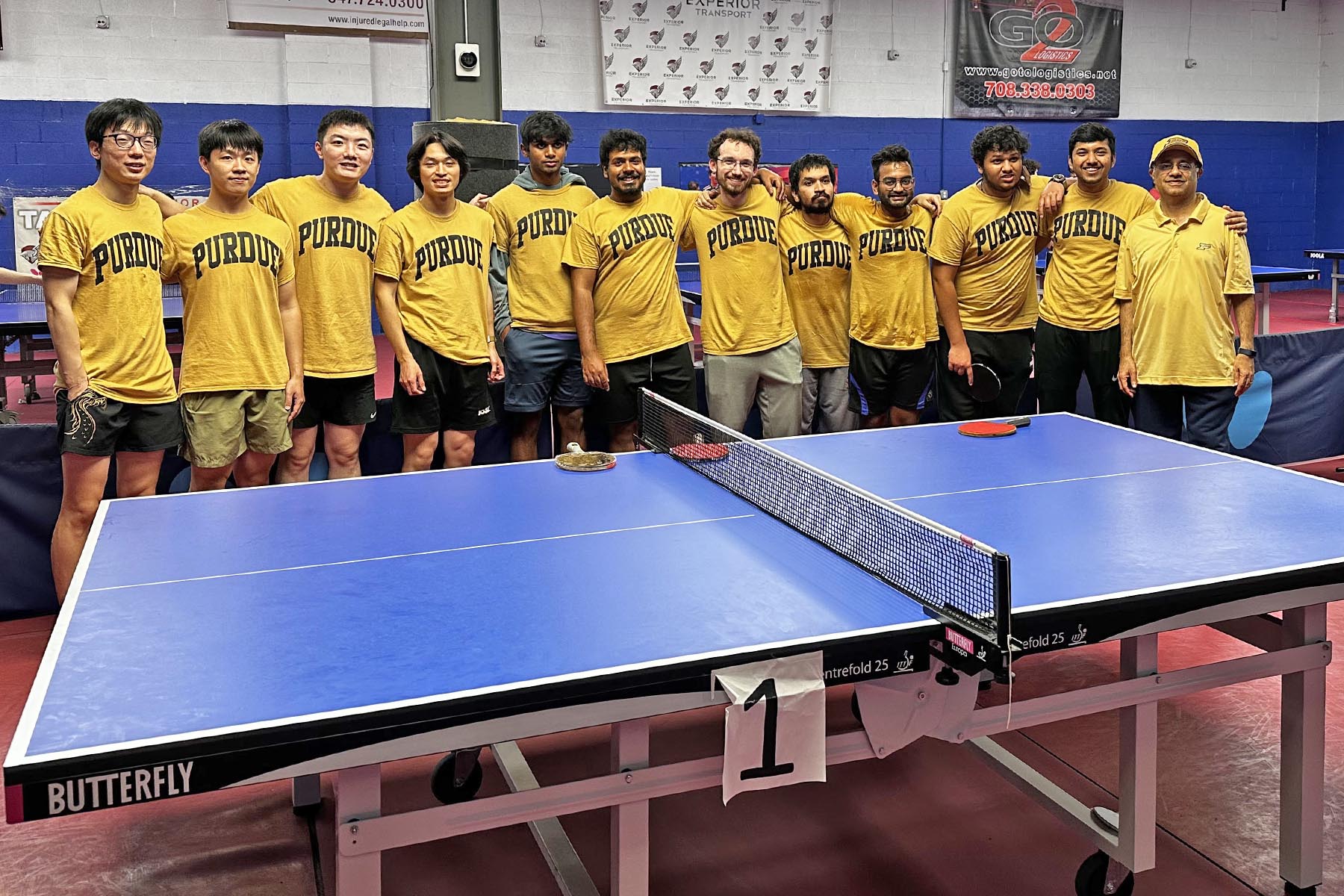 In addition to casual play, they wanted to take advantage of being an organized club, and start representing Purdue at competitions. “Originally, we hadn’t even thought about going to divisionals,” Ramani says. “Most of our team had just met each other!”

Undeterred, they travelled to Addison, Illinois in November 2022 for a tournament organized by the National Collegiate Table Tennis Association (NCTTA). At these Upper Midwest Divisionals, Boilermakers would be competing against Indiana University, Northwestern University, University of Illinois at Chicago, University of Notre Dame, and the Universities of Wisconsin at Madison, Milwaukee, and Whitewater.

“For the first time in our history, we beat both IU and Northwestern, which were huge upsets,” says Ramani. “Our top two singles players lost, but then they immediately teamed up and played the doubles final as a tie-breaker. It was a close game, it went to the best-of-5 matches, and we won the final point. It was so exciting! We even made the front page of the Journal & Courier. The Boilermakers are back!”

The Purdue Table Tennis Club meets Sundays from 3:00 to 5:00 p.m., and is open to both men and women who want to play, for just a small annual fee. and Ramani stresses that the competitions are just one aspect of the club. “We have a lot of people who play casually; some are semi-serious; some are super serious. We have all kinds.”

Ramani himself claims to be a B-level player, but is more circumspect about his role with the team. “I’m more of an encourager and a cheerleader. I also work to recruit people to join the club. Where else can you have this much fun for just $5?” 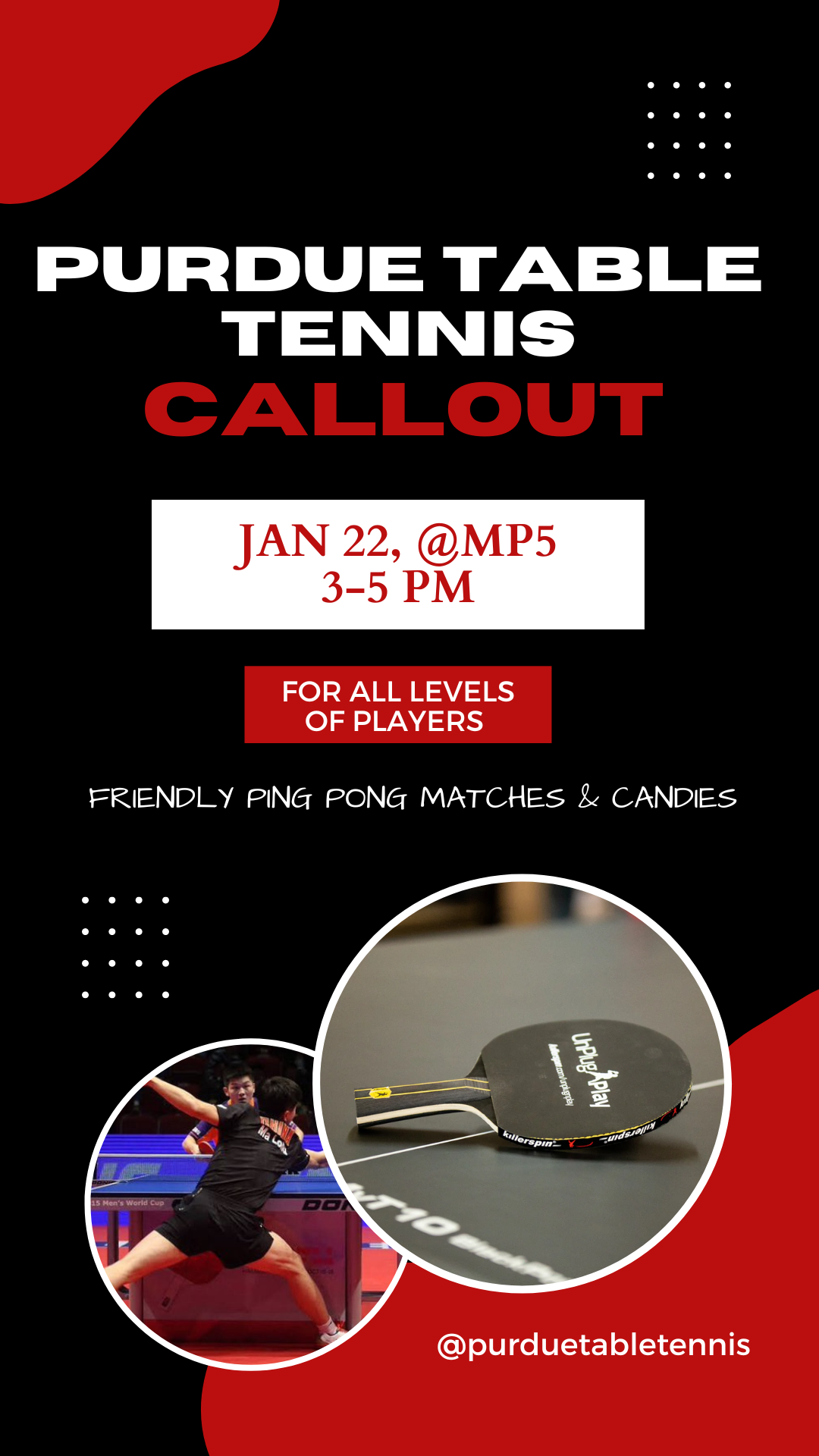 CALLOUT: Join the Purdue Table Tennis Club this weekend! Callout is Sunday, January 22, from 3:00-5:00 pm in Multipurpose Room 5 of the Co-Rec. Men and women of all skill levels are welcome, for friendly play and competitive matches. Follow us on Instagram: @purduetabletennis