During the school year, Jennifer Short is a typical mechanical engineering student at Purdue. But when the racing calendar begins, her true passion for motorsports takes over. She discusses her recent internship with 14-time INDYCAR champions, Chip Ganassi Racing.

Growing up in Libertyville, Illinois, Jennifer was interested in science at an early age. “My aunt actually made me a homemade science kit, with all these cool activities,” she remembers. “I was only allowed to do one at a time, because if it were up to me, I would have done them all at once!”

She also was exposed to racing at an early age. “I was ten when my dad took me to my first Indy 500,” she says. “I remember Dario Franchitti won that year. It’s always such an incredible spectacle: the crowds, the energy, the competition. I’ve been to every 500 since then... except this year, I was on the pit box! And Dario Franchitti was my co-worker!”

With such a unique background, it seemed like destiny that Jennifer would end up at Purdue. “I attended the GER2I camp in 8th grade, and lived in the Purdue dorms for two weeks, which was so cool,” she remembers. “I kept coming back to campus for Women in Engineering events, or basketball camps. I remember doing college visits elsewhere, and literally sitting on the campus of some other school when I told my parents, ‘I’m going to Purdue!’” 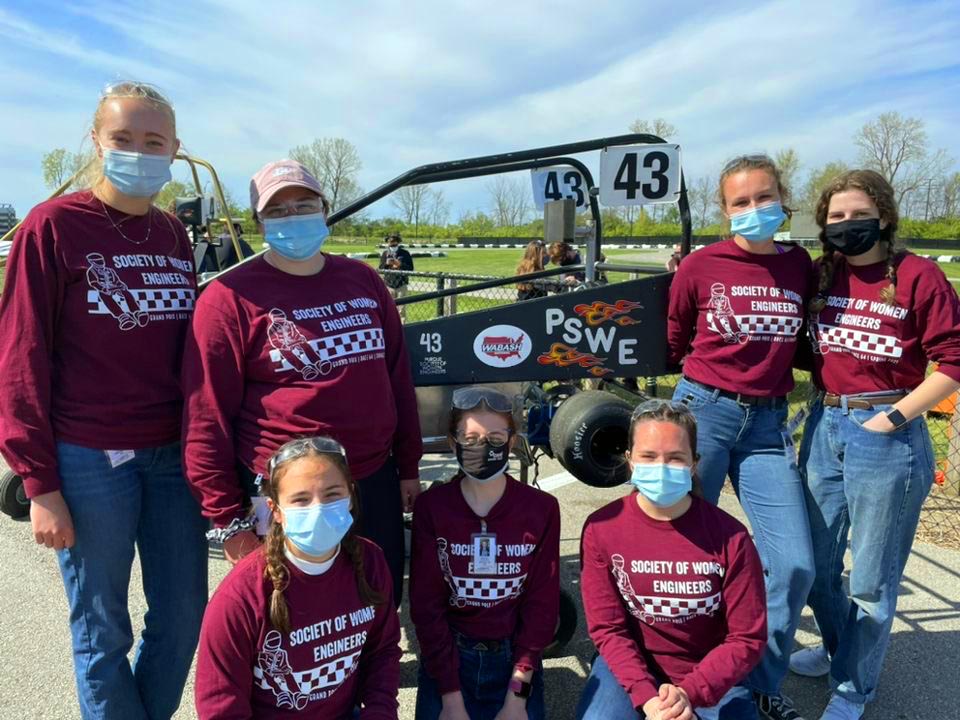 Jennifer Short (second from right) jumped right into motorsports at Purdue, joining the Grand Prix team for the Society of Women Engineers.

Jennifer’s Purdue career got off to a fast start. She joined the Purdue chapter of Society of Women Engineers (SWE), and worked on their Grand Prix team. At one of their meetings, recent SWE Grand Prix alum Jenna Soukup (BSME ’19) spoke to the team about her new job, as a systems engineer for Andretti Autosport. Jennifer was hooked. “I purposely stayed behind to ask her questions,” says Jennifer. “I wanted to make sure she remembered me the next time I reached out.”

She wouldn’t have to wait long. Jenna needed an intern that summer for Andretti’s LMP3 team in the IMSA WeatherTech SportsCar Championship. “She told me straight out: ‘It's unpaid, and you're going to work a lot of hours,’” Jennifer remembers. “I didn’t care, I wanted in!”

But there was a problem... two, in fact. Jennifer had already committed to a co-op session at GE Aviation. And she was participating in the Summer Undergraduate Research Fellowship (SURF) at Purdue, doing a manufacturing research project with Jan-Anders Mansson. So she did the unthinkable, and committed to all three. She laughs: “I figured, this is the ultimate way to figure out if I have a future in motorsports, in research, or in the corporate world!”

She worked 40-hour weeks for Dr. Mansson; and on IMSA race weekends, she would work 60-hour unpaid weekends at the track for Andretti. “I was essentially an IT tech,” she says. “I operated our timing stand, and worked as an assistant to the engineers. I also went over the wall occasionally on pit stops, and even used a fire extinguisher to put out a car that was on fire, which was the coolest moment of my life up till then!”

She also learned that endurance is not just for drivers. “I was on the crew for the 24 Hours of Daytona, and the 12 Hours of Sebring,” she says. “I remember doing my thermodynamics homework in the back of the garage, with the mechanics all laughing at me. I told them, ‘We don’t have a session for another 20 minutes, and this is due at midnight! I can still do one more thermo problem!’” 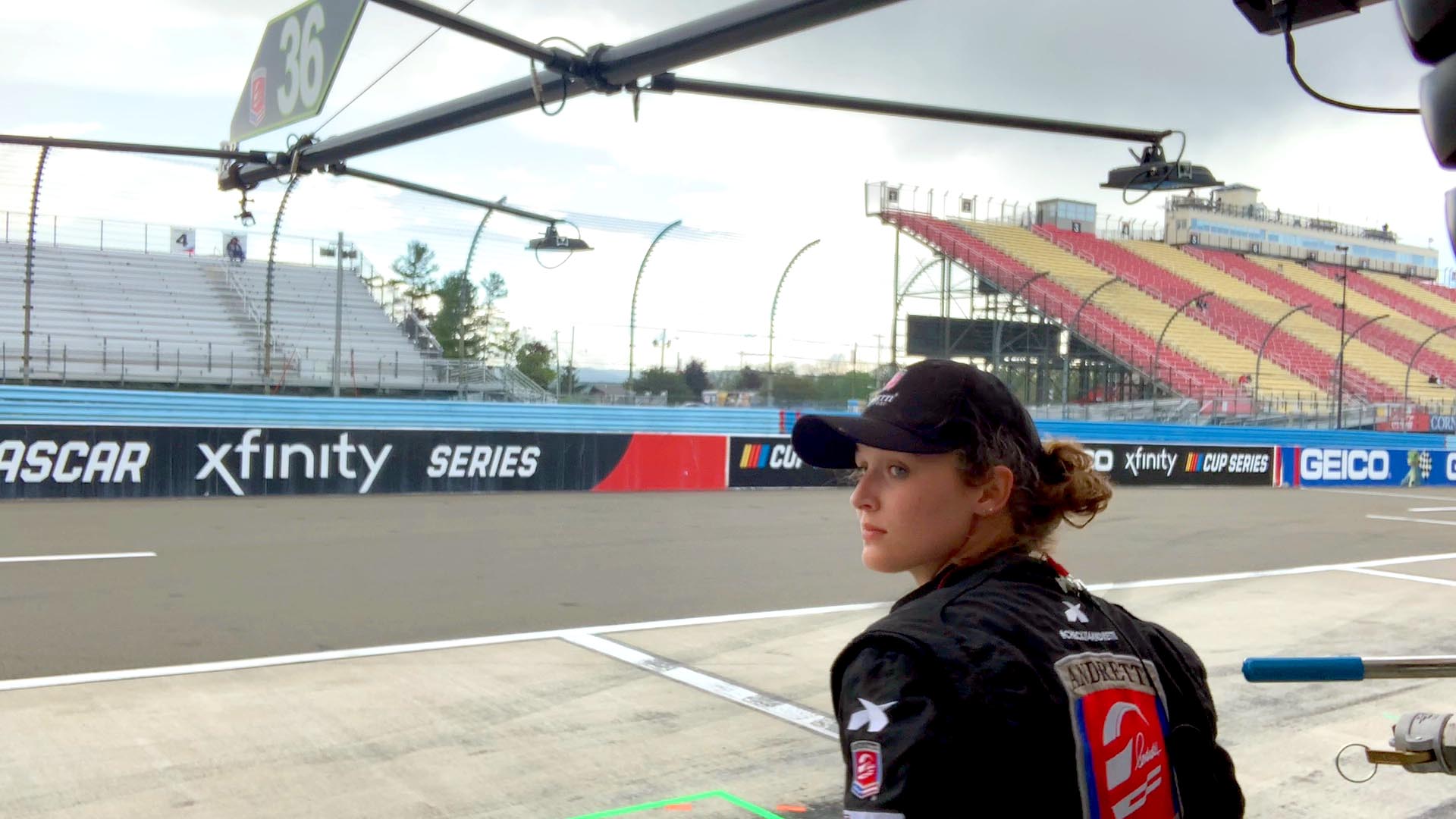 As part of Andretti Autosport's LMP3 team, Jennifer worked on IMSA races that were 12 or even 24 hours long.

We are the champions

After her Andretti experience, Jennifer became convinced that motorsports was her future. As the summer of 2022 approached, she went on the offensive to find an internship. “I hunted down every email address I could find,” she says. “I sent my resume to 12 INDYCAR teams, and even a couple F1 teams. In March, I got the call from Ganassi.”

Chip Ganassi Racing had teamed up with PNC Bank, the sponsor for Scott Dixon’s #9 INDYCAR team, to fund a Women in Motorsports internship program to accelerate career pathways and mentorship opportunities for female students interested in motorsports. Jennifer was one of five students selected for the inaugural cohort.

Her first job? The Indianapolis 500. 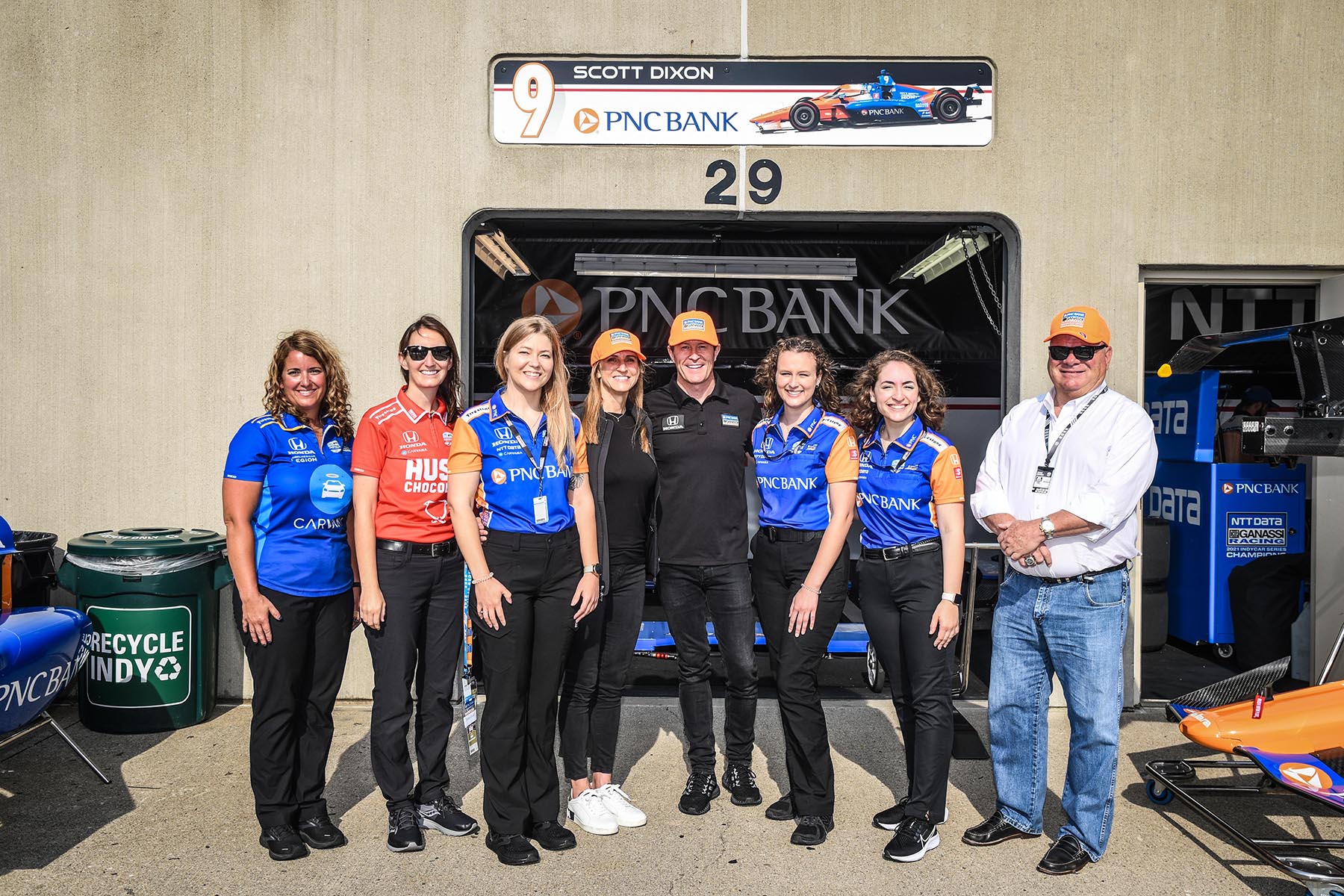 “My first day, after signing all the paperwork, they immediately took us right to the Speedway,” she says. “I was just in awe. This team is incredible, and the people are so brilliant. I shadowed their engineers, and asked so many questions. I made a point of becoming friends with the mechanics, because they were so knowledgeable about the car.”

Jennifer eventually slotted into the role of data analysis, developing numerical tools to analyze the information generated by the car’s numerous sensors. “It’s a different experience from jumping over the wall with a helmet and a firesuit,” she laughs. “But when tenths of a second matter, even the smallest bit of data about fuel flow can be the difference between winning and losing.”

One of her biggest advantages was working with fellow Boilermaker Angela Ashmore (BSME ’10 MSME ’13), the first female crew member to win an Indy 500. “She was so amazing to work with,” says Jennifer. “She was so kind and so willing to teach me. Honestly, I idolize the Excel spreadsheets she creates. She is just a data wizard!”

Angela also offered advice on how to navigate a career field dominated by men. “We talked about what it means to be women in motorsport, because it is a different experience,” she says. “At least with Ganassi, none of them ever questioned why I was there, which often does happen with women in motorsports. I never felt like an intern; I very much felt like I belonged.”

So much so, that Ganassi took Jennifer on the road all summer. She worked at races in Detroit, Wisconsin, Ohio, and Iowa. Unfortunately, the two summer races won by her driver, Scott Dixon, were across the border in Toronto (which the interns didn’t attend); and in Nashville, when Jennifer had already returned to Purdue. So while she could only celebrate vicariously, she says there’s nothing like being there in person.

“When Scott won the pole for the Indy 500, and we were all so excited,” Jennifer says. “We all ran down to the start/finish line, and put on our P1 hats. And when [Ganassi teammate] Marcus Ericsson won the race, we were all so happy for him. But even the races when I couldn’t physically be there, I could watch the results and say, ‘That’s my team. I helped make that happen.’” 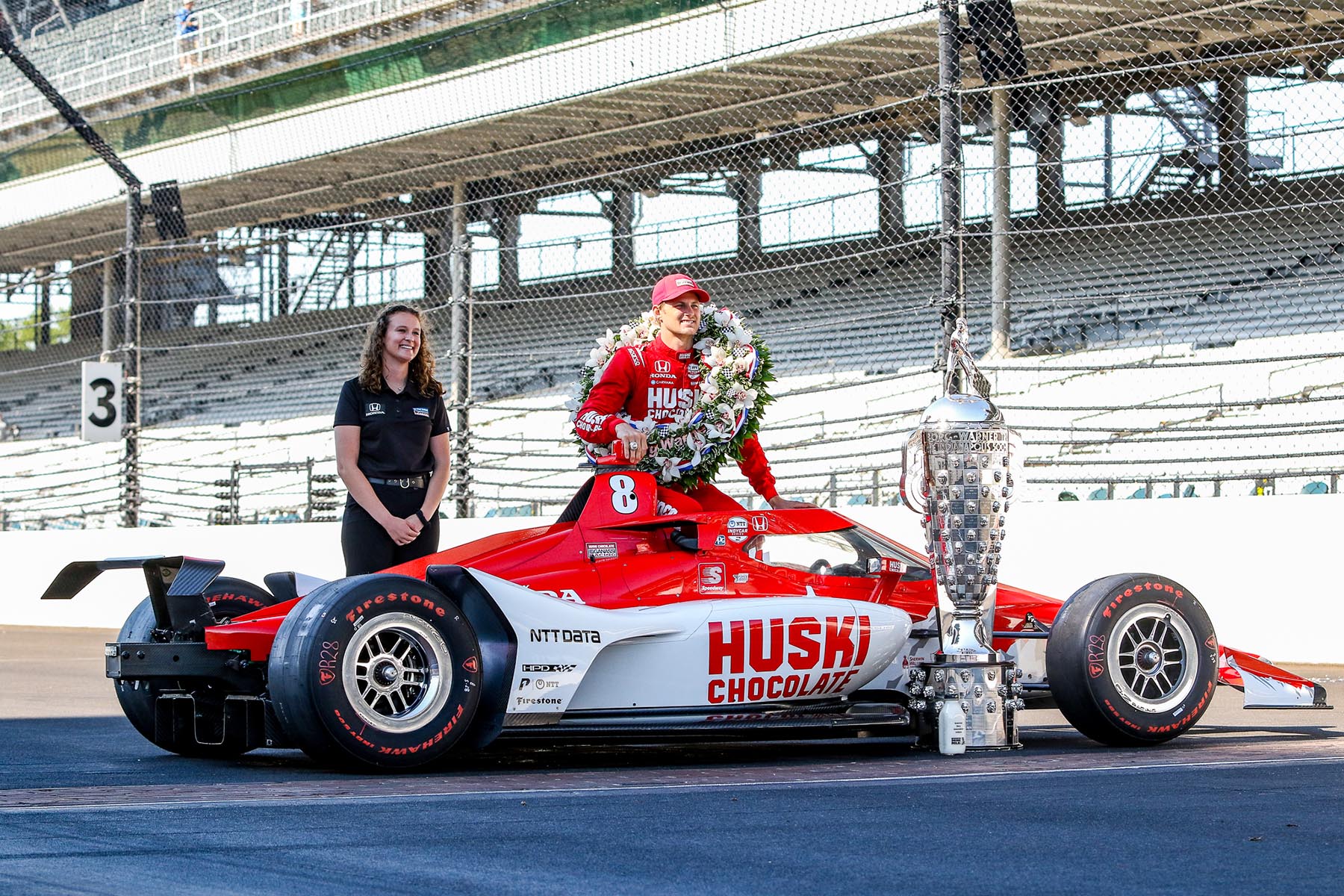 Putting in the work

Now that she has full-time experience in two different racing series, Jennifer is even more convinced of her passion for motorsports. “There’s a saying in racing,” says Jennifer. “All you need to do is get your foot in the door, and once your foot’s in the door, it slams behind you. Once you’re in that world, it becomes an all-consuming passion. And that’s me; when I commit to something, I fully commit.”

She's not the only one. Mechanical engineering student Zach Nelson spent his summer working for the newest INDYCAR team, Juncos Hollinger Racing. And several Purdue ME alumni have prominent positions in motorsports, including NASCAR crew chiefs Chris Gabehart and Jon Hassler.

While Jennifer continues to attend mechanical engineering classes at Purdue (and serve with the SWE Grand Prix team), she also has her eye on the next opportunity. But she knows it won’t be easy.

“Getting into motorsports requires a little bit of luck, and a whole lot of passion,” she says. “When Jenna Soukup spoke to our Grand Prix team, I purposefully stayed behind to ask her questions and made sure that she remembered me. When I worked for Andretti, I put in 100-hour weeks. Now I have the experience to back it up. I can tell these INDYCAR teams that I’ve been around a car; I’ve done sensor calibrations; I’ve operated their software. It’s having these connections that will make the next step possible.”

“If you have a dream, you’ve got to throw your all into it.” 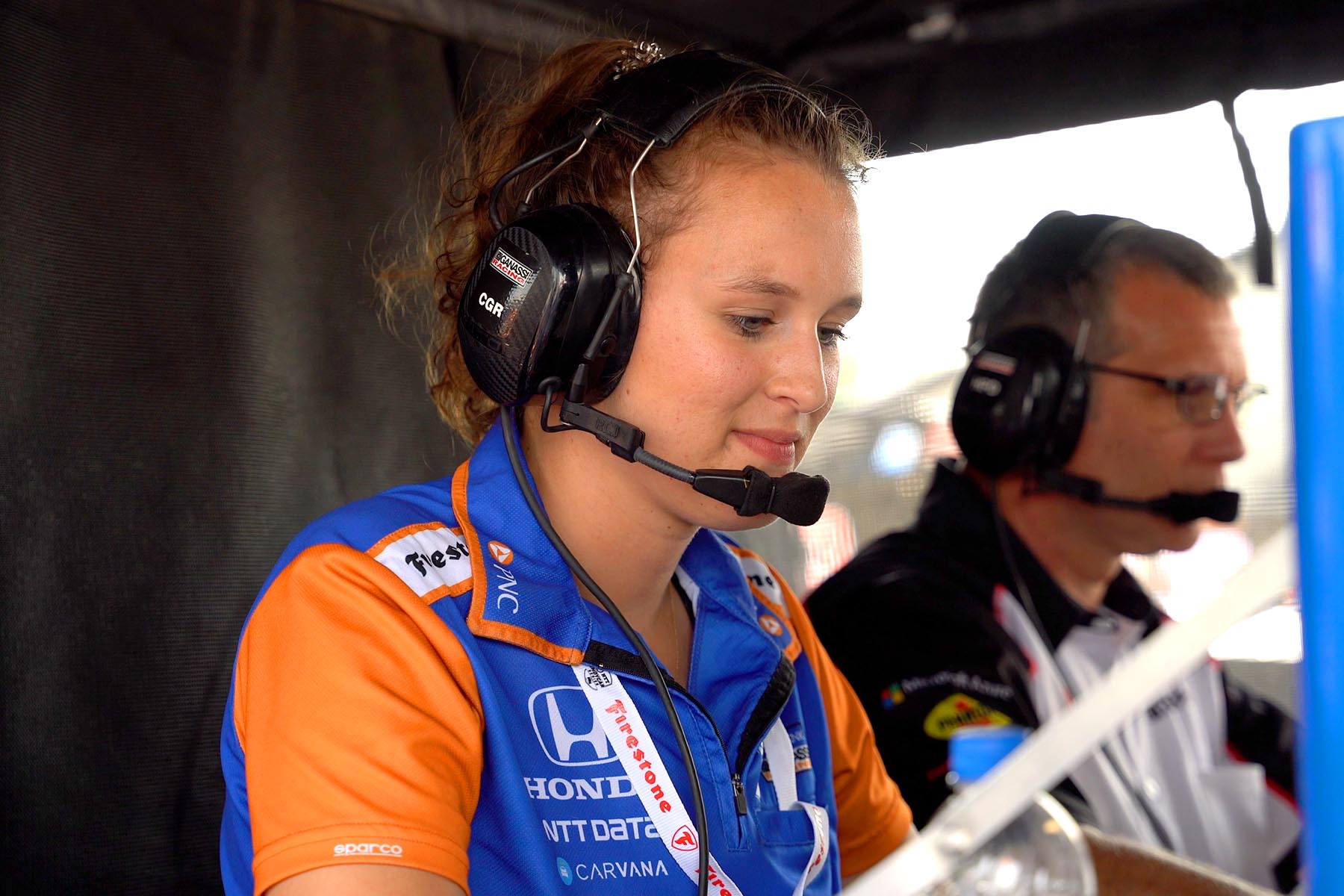