Water is the key to solving the US-Mexico border crisis

A surge of migrants. An unstable power grid. A changing climate. Even the hostile takeover of a dam. The US-Mexico border is currently facing a number of daunting challenges. But according to research just published by Purdue University engineers, there is one thing that could solve all these problems: water. 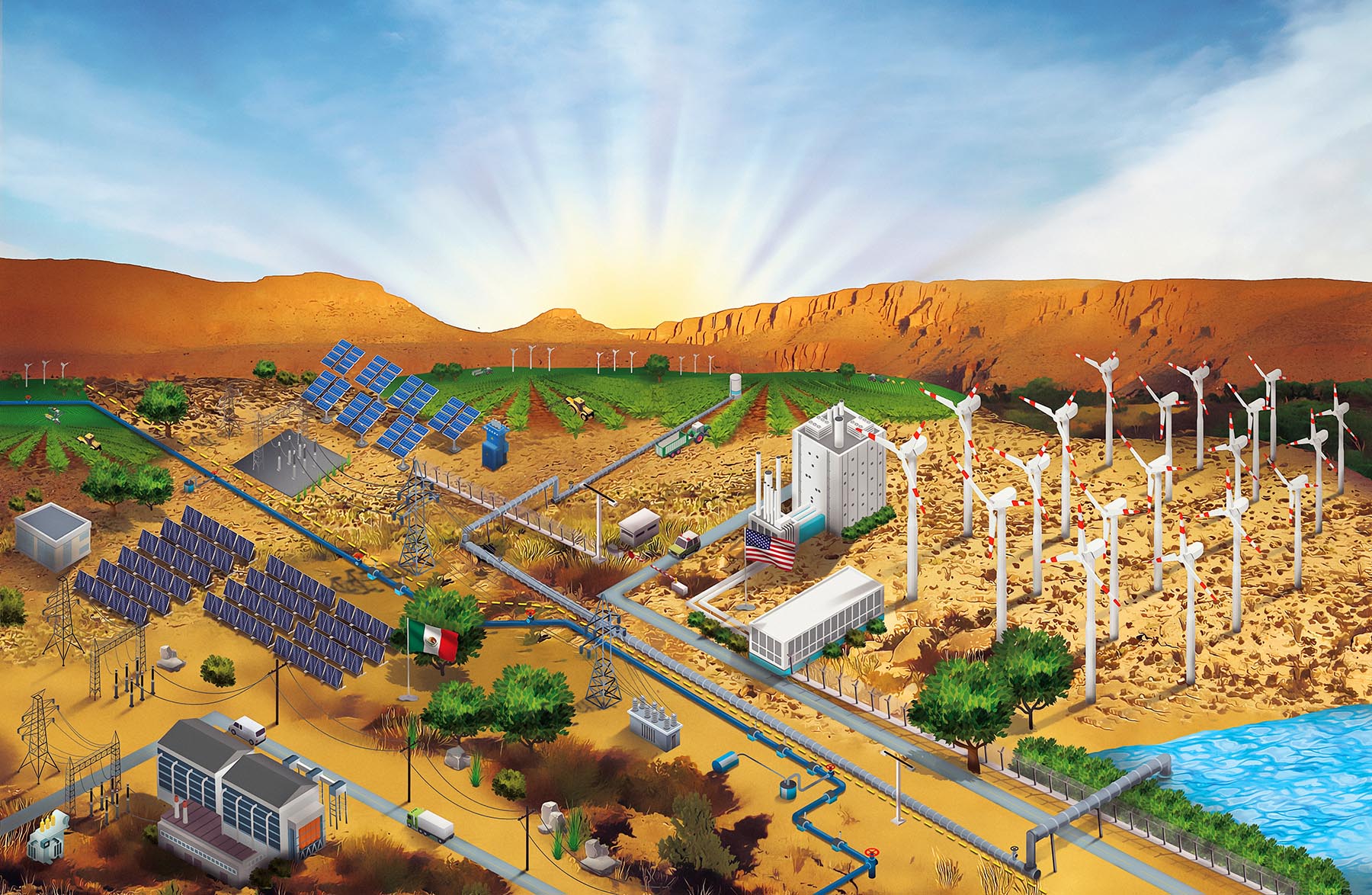 “Mexico is the United States’ second largest trading partner,” said Luciano Castillo, Kenninger Professor of Renewable Energy and Power Systems in Mechanical Engineering. “And yet our border has so many problems. Instead of trying to address the symptoms, we want to fix the root cause of most of these problems, by bringing water to the desert.”

In 2019, Castillo led a coalition of engineers and scientists from both countries to propose an Energy Corridor along all 1,954 miles of the US-Mexico border. By maximizing the area’s abundant solar and wind resources, the Energy Corridor would turn an otherwise stark desert into a thriving community for business, agriculture, and discovery; and in turn, satisfying the challenges of environmental stewardship, border security, and economic opportunity. The proposal was highlighted in Scientific American, The Atlantic, Washington Post, and many others. Now, newly published research in the journal Applied Energy puts hard numbers to that proposal.

Water is the lynchpin to many geopolitical issues around the world, including the US-Mexico border; most of the American Southwest lacks a suitable source of fresh water.  Climate change continues to make these arid conditions worse, while dwindling resources are exacerbated by the growing populations of cities like Las Vegas, Phoenix, and Los Angeles. Ownership of existing sources of water, like the Rio Grande and Colorado rivers, is hotly contested; in 2020, farmers in the Mexican province of Chihuahua seized a dam in protest of the exchange of water resources with the United States.

That’s not the only border issue magnified by recent events. An unprecedented cold snap in Texas in February 2021 caused more than 100 deaths and massive devastation to their electrical grid, as natural gas and water providers were unprepared for extreme conditions. Likewise, turmoil in Central America continues to drive thousands of migrants to the US border, where there are few obvious options for safety or employment.

“The border region is a once-in-a-lifetime opportunity, just waiting to come to fruition,” said Castillo. “The effects of climate change, the lack of economic opportunities in Central America, the safety of the border, the stability of energy production – all of these issues could be solved with this Energy Corridor.”

Water is the key

Castillo’s plan hinges on building two large desalination plants; one at the Gulf of Mexico, the other at the Pacific Ocean. These two facilities would take in seawater, and use reverse osmosis to convert it to freshwater. Pipelines would then pump the fresh water along the entire 1,954-mile length of the border, for use by residents, farmers, and businesses.

“Many areas of the world get their fresh water from desalination,” said Michael Roggenburg, the Mechanical Engineering graduate student who co-authored the paper. “The Middle East relies on it, and so do Australia and the Caribbean, and parts of the US. But the main problem with the reverse osmosis process, is how energy intensive it is.”

Reverse osmosis involves flowing seawater through a membrane at high pressure, sometimes up to 70 times atmospheric pressure. The machinery to make the process work requires a huge amount of electricity.  How can desalination at this scale be done sustainably?

Roggenburg analyzed 108 variations of renewable energy sources (such as wind and solar), and 27 variations of traditional fossil fuel power generation (oil and natural gas). His mathematical models concluded that using wind and solar would be the most economical choice to power the desalination plants, as well as the pumping infrastructure along the pipeline.

“The Southwest has such good solar and wind resources, it just doesn’t make sense to use fossil fuels,” said Roggenburg.  “And the other obvious benefit of using renewables is the reduction in our carbon footprint, removing about 2 million cars’ worth of CO2 from being generated.”

Avoiding traditional power generation has another positive environmental effect in regards to preserving water. In the United States, 45.3% of the water withdrawn from lakes, rivers and underground aquifers is used to cool off thermoelectric power plants. By choosing to use renewable energy sources, the water that would have been used for cooling thermoelectric power plants can be diverted back to human use and agriculture, helping to achieve water security.

The final benefit is an economic one. Castillo’s proposal includes turning the border into a free-trade zone, and establishing research institutes and other new industries in the area. Roggenburg forecasts adding 100,000 jobs throughout the Energy Corridor.  “These are high-paying, high-skilled jobs,” he said, “which would become a game-changer for this impoverished area. Building a wall doesn’t add anything of value; building new industries will usher in a new era of economic prosperity on both sides of the border.”

How much will it cost?

“In calculating the cost, we were looking at other large infrastructure projects in the United States, like Hoover Dam, or the California Aqueduct,” said Roggenburg. “But this is really unprecedented; no one’s done anything of this scale before.”

Roggenburg attempted to calculate the total finished cost of all the infrastructure that would need to be built along all 1,954 miles of the Energy Corridor. His final estimate was a range of $43-70 billion over several decades. “That’s a really intimidating number,” he said, “and there are many who would look at that number and just stop, thinking it’s impossible. But when you look at the scale of the project, and the potential funding sources from governments, industry, and academia, it’s not that outlandish. The European Union spends more than $100 billion a year on infrastructure, so it's about time the US caught up.”

Roggenburg also calculated the average cost of water delivery with this new renewable infrastructure, compared to existing infrastructure – known as the “levelized cost.” Across the United States today, people typically pay $0.50-1.70 per cubic meter of water, using the infrastructure that already exists in their towns and cities. Water delivered from the new desalination plants would cost $2.00-$3.52 per cubic meter. “That’s actually a pretty competitive number,” said Roggenburg, “considering it would be brand-new systems built from scratch, delivering water to places with no existing infrastructure. Solar farms and wind turbines are designed to last 20-30 years, and pipelines can last 100 years. The longer it operates, the more affordable it gets.”

And simple cost comparisons don’t tell the whole story, according to Roggenburg: “The Southwest is different. The demand for water keeps growing, and there just isn’t enough supply to go around. It’s important to remember that Americans and Mexicans are already paying these costs, through their electric bills, gas bills, and water bills – and indirectly, by crime and poverty around the border. If we do nothing, these costs will almost certainly go up. These services must happen anyway, but the Energy Corridor makes them happen sustainably and successfully.”

While these Purdue engineers drill down into the details of the Energy Corridor plan, they also want to make sure people remember the big picture. “The point of doing this research was exploring whether we can really do this right now,” said Roggenburg. “And the overwhelming answer is yes!  We have all the technology we need right now. This is proven technology that people are using all over the world. The only difference is the scale; no one’s ever built something this big before. It makes water relatively cheaply, brings jobs to the area, keeps CO2 out of the atmosphere, cuts down on water waste, and can be built today. We don't need new technology or fantastical science to pursue this vision; just people, with the will to enact real change.”

ABSTRACT: Access to sustainable clean water is a necessity for any successful civilization. The US-Mexico border has been experiencing a decline in the availability of this critical resource, stemming from mismanagement and heightened population which are exacerbated by climate change. If water is not adequately overseen, the region will be unable to support local societies and industry, effecting millions of inhabitants. A vision, articulated in Scientific American in 2019, outlined the potential for the development of a technology innovation park along the border which would provide sustainable water using renewable powered desalination. A version of this concept is demonstrated for the American side with configurations of coastal Seawater Reverse Osmosis desalination plants, sized to meet the public water demand of ~1000 MGal/day (~3.79 Mm3/day). The desalination and distribution of clean water is powered by offshore wind and onshore solar PV farms, which transfer energy over High Voltage Direct Current cables. One-hundred eight (108) renewable variations were simulated and demonstrated the ability to supply clean water at a levelized cost of 2.00–3.52 $/m3. When compared to 27 fossil fuel configurations, renewable powered variations avert adding the equivalent of 1.7–2,000,000 cars worth of CO2 pollution per year, avoid withdrawing the equivalent of 67–77,000 US households worth of water for power generation annually and add potentially over 100,000 more jobs. As water scarcity along the border becomes more prevalent, alternative sources of sustainable water will be crucial for bringing long term resource and economic stability to the region.