In 1969, Robert Kohr was a well-respected professor of mechanical engineering at Purdue. After speaking at a conference in Cincinnati, his flight back to Indianapolis collided with another plane in mid-air. 83 people were killed, including Professor Kohr. He was 44 years old. In 2021, Purdue honored him posthumously with the Outstanding Mechanical Engineer award.

Paul Johansen was Prof. Kohr's last doctoral student. Now living in Naples, Florida, Johansen travelled to Purdue in September 2021 to accept the award on Kohr's behalf. He has also been instrumental in establishing the R. H. Kohr Graduate Student Fellowship in Mechanical Engineering, enabling future students to benefit from Prof. Kohr's legacy. He shares his memory of the professor he calls "my mentor and my friend."

I graduated with a BSME from Iowa State University in 1964. I was a co-op student. As a result of my co-op experience at Collins Radio Company (now Rockwell Collins), I was convinced that a graduate degree would be valuable in finding a job in the automatic controls industry. I did some research on mechanical engineering departments that had strong programs in automatic controls, and I picked Purdue.

One of the first graduate-level courses I took in the ME school was Analog Computation. Analog computers were useful for analyzing and simulating automatic controls, vibration phenomena and other dynamic systems. The format of the course was two lectures and two hours of lab each week, all given and supervised by an amazing professor. He was Robert Kohr.

What was Robert Kohr’s background? 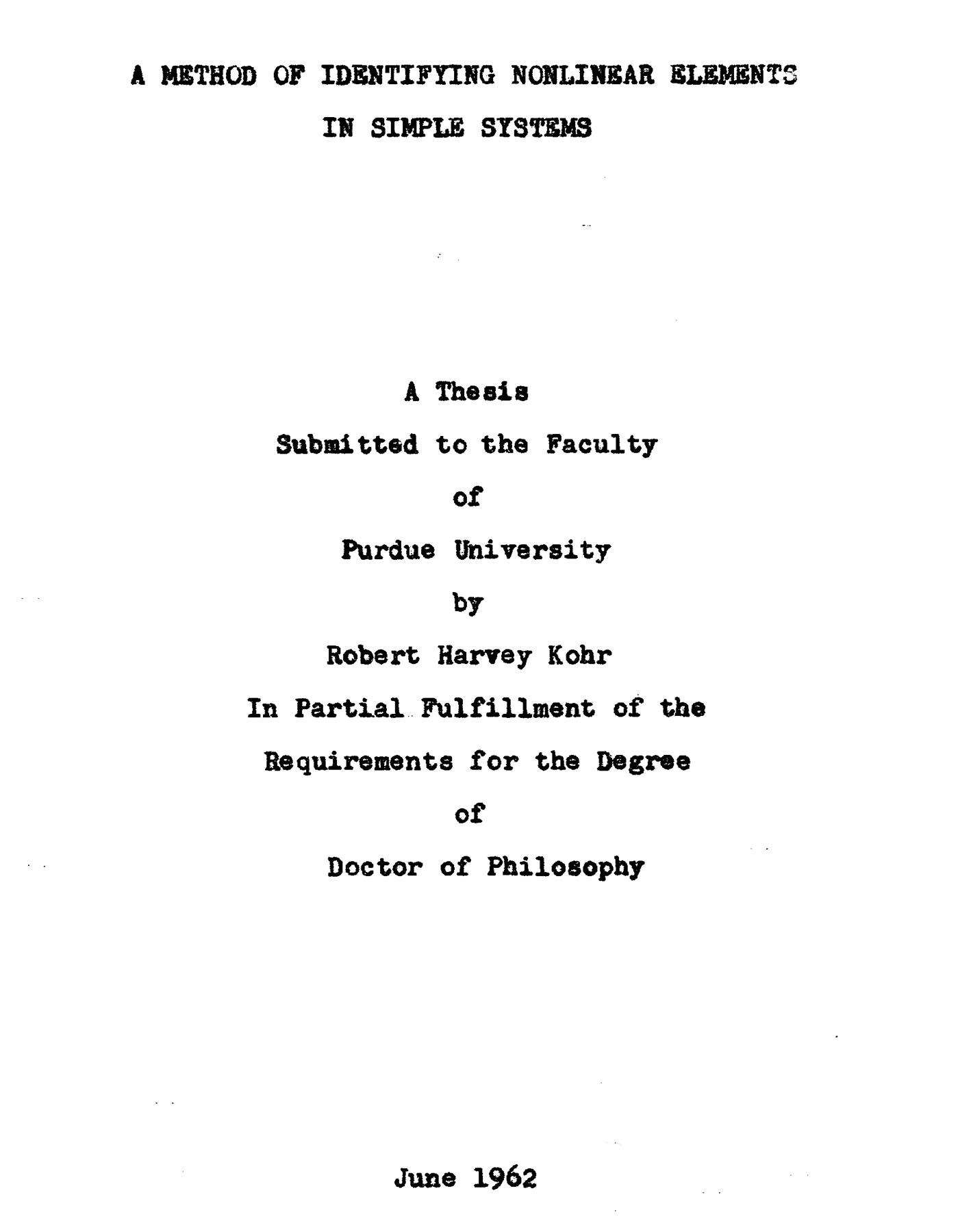 Professor Robert Kohr worked in the automotive industry for several years before coming to Purdue. He earned bachelor’s and master’s degrees at the University of Michigan and did vehicle dynamics and steering analysis at the General Motors Research and Development Center in Warren, Michigan. [I think he may have taken a few laps at the test track in Milford, Michigan as well, but he never claimed title to any records.] Much of the work he did at General Motors depended on analog computers for analysis and simulation of vehicle behavior under various conditions.

Analog computers use an electrical analogy with actual physical variables such as displacements, velocities, flowrates, concentrations, etc. and display the “solution” of the physical problem as a voltage trace on an oscilloscope or pen recorder. The main limitation of analog computers was the limited complexity of physical problems that could be solved. Their greatest strength was the ability to display the behavior of a physical system in real time, or sped up or slowed down by a factor of 100 or more. Problem parameters could be changed by the turn of a potentiometer, and the resulting solutions could be seen immediately on the screen of an oscilloscope. These features made analog computation a valuable teaching tool, and Robert Kohr was a master of it.

What Made Robert Kohr a Great Teacher?

In addition to teaching the analog computation course, Professor Kohr taught the basic undergraduate course in automatic controls and graduate level courses in automatic controls and analysis of nonlinear systems. His lectures were always meticulously prepared and brilliantly given. The courses he taught at Purdue attracted the best and brightest students, both undergraduate and graduate.

In a recent correspondence, Professor Kohr’s son, Will, wrote, “He spent hours in the basement of our home, writing on a chalkboard and practicing aloud his lectures, ceaselessly refining. He lived more than anything for his work.”

I have often thought of Professor Kohr’s approach to teaching as “heuristic.” By this I mean he challenged his students to think beyond the apparent solution to a specific problem, to discover how the solution would change if system parameters or constraints were changed. This kind of thinking gave his students clearer insight into the behavior of the systems they studied. It’s not coincidental that Professor Kohr’s experience with analog computing, where a whole spectrum of solutions could be obtained by the turn of a potentiometer knob or the changing of a capacitor, contributed to his stimulating and popular teaching style. His heuristic approach to problem solving attracted undergraduate students to consider graduate school and graduate students to seek his commitment to mentor them through their studies and research.

One of his students wrote, “As an undergraduate, I took Professor Kohr’s course in Automatic Controls (ME475) in 1964 and was impressed with his lecture delivery: Always clear and well thought out. I always seemed to walk away feeling that I really learned something new and exciting. Bob Kohr was truly one of the ‘greats’ in my life experience.”

His graduate level courses addressed the issues of nonlinearity. It’s probably safe to say that all real-world dynamic systems are “nonlinear” to a greater or lesser extent. This means that they cannot be analyzed by conventional linear mathematical techniques. His courses dealt with predicting and analyzing conditions such as hysteresis, jump-resonance and limit cycles, and he illustrated these concepts with stimulating examples. He taught methods of linearizing, approximating solutions and identification and compensation of dynamic systems with nonlinear characteristics. These topics challenged his graduate students to extend the state of the art with advanced research and resulting dissertations.

In all of his academic endeavors, Robert Kohr was a perfectionist, maybe to a fault. When he appeared at scheduled lectures, he always carried with him a thick three-ring binder full of notes that resembled a manuscript for a book. Once, after class, I asked him how his book was coming along, and he replied, “What book?” His lectures were so perfectly prepared and organized that, in my judgement, they would have constituted an excellent textbook, or several textbooks, for that matter. 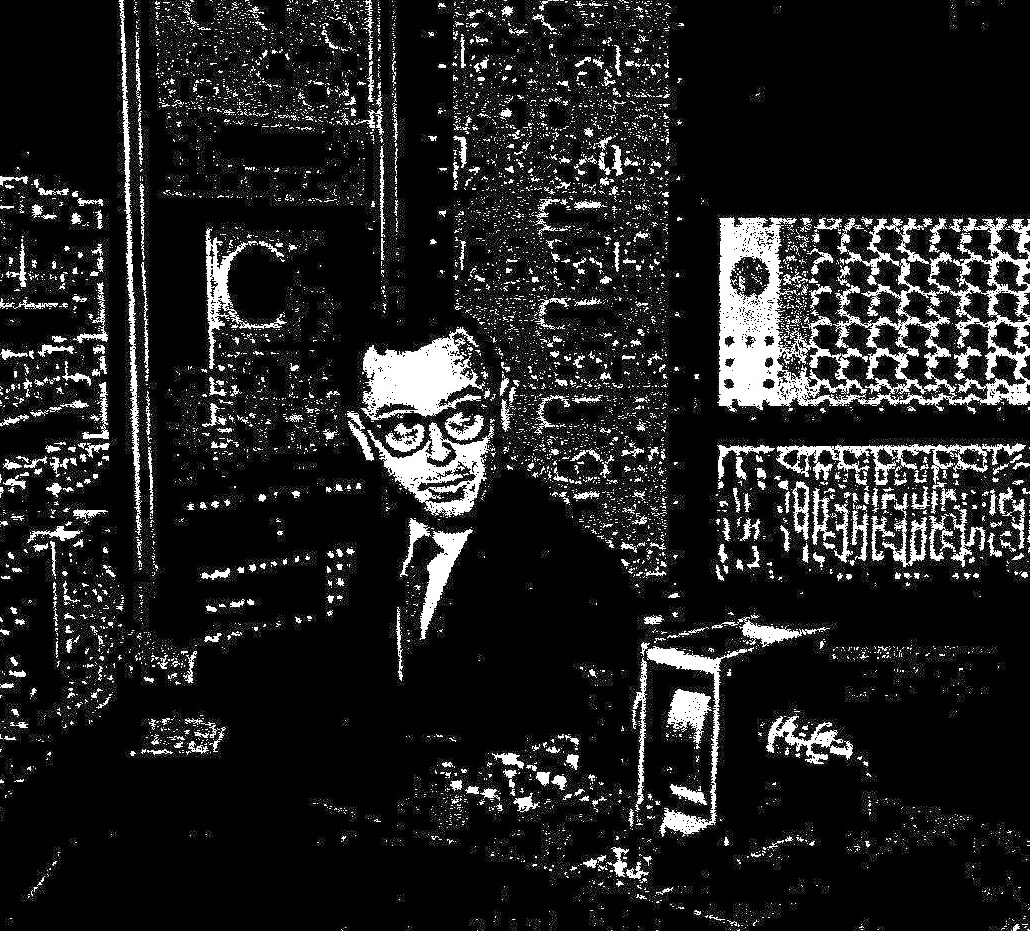 What Made Robert Kohr an exemplary research adviser?

Professor Kohr required of his doctoral students a solid background in mathematics and supporting course work from outside the Mechanical Engineering School. He expected well-thought-out research proposals from candidates before initiating their thesis research. He demanded rigorous attention to facts and details. He required his doctoral students to be scrupulously prepared for their preliminary and final examinations. He was always available for consultation and advice.

The success of his teaching, research and mentoring styles led several of his doctoral students to seek careers in the academic community.

In the spring semester of 1969, Professor Kohr took a well-earned sabbatical leave to his alma mater, the University of Michigan. I had passed my preliminary exams in the fall of 1968, and I had a good start on my doctoral research and a pretty good idea of what my dissertation was going to look like. We kept in touch by telephone and written correspondence (this was long before the emergence of the internet), and I drove to Ann Arbor twice during the semester for some productive face-to-face discussions of his expectations and my progress. By mid-summer of 1969, Professor Kohr had returned to West Lafayette and was preparing for his fall semester classes and a presentation he had been invited to give at a symposium at the University of Cincinnati in early September. It was beginning to look like I would be ready for my final examination and dissertation defense by the end of the calendar year.

Who was Robert Kohr?

Robert Kohr was an outstanding university professor. He knew what his profession expected of him and he exceeded it. He inspired the best and brightest undergraduate students who took his courses to consider advanced studies in graduate school. His relationship with graduate students whom he mentored was friendly, but formal. He clearly understood the best possible relationship between graduate student and research advisor: Whatever success the student enjoys from his intellectual curiosity and hard work attests to the competence and wisdom of his mentor.

Robert Kohr was a gentleman, devoted husband and father. His manners were impeccable, his demeanor conservative (I never saw him in the Mechanical Engineering building without a jacket and tie). He was respected by his students and colleagues as a man of high moral character, a loyal and trusted friend and a solid citizen.