It's not every day that college students get the opportunity to teach something to an astronaut! But Karl Akert, a senior in mechanical engineering, has enjoyed several unique opportunities, working with NASA as part of Purdue Engineering's co-op program. 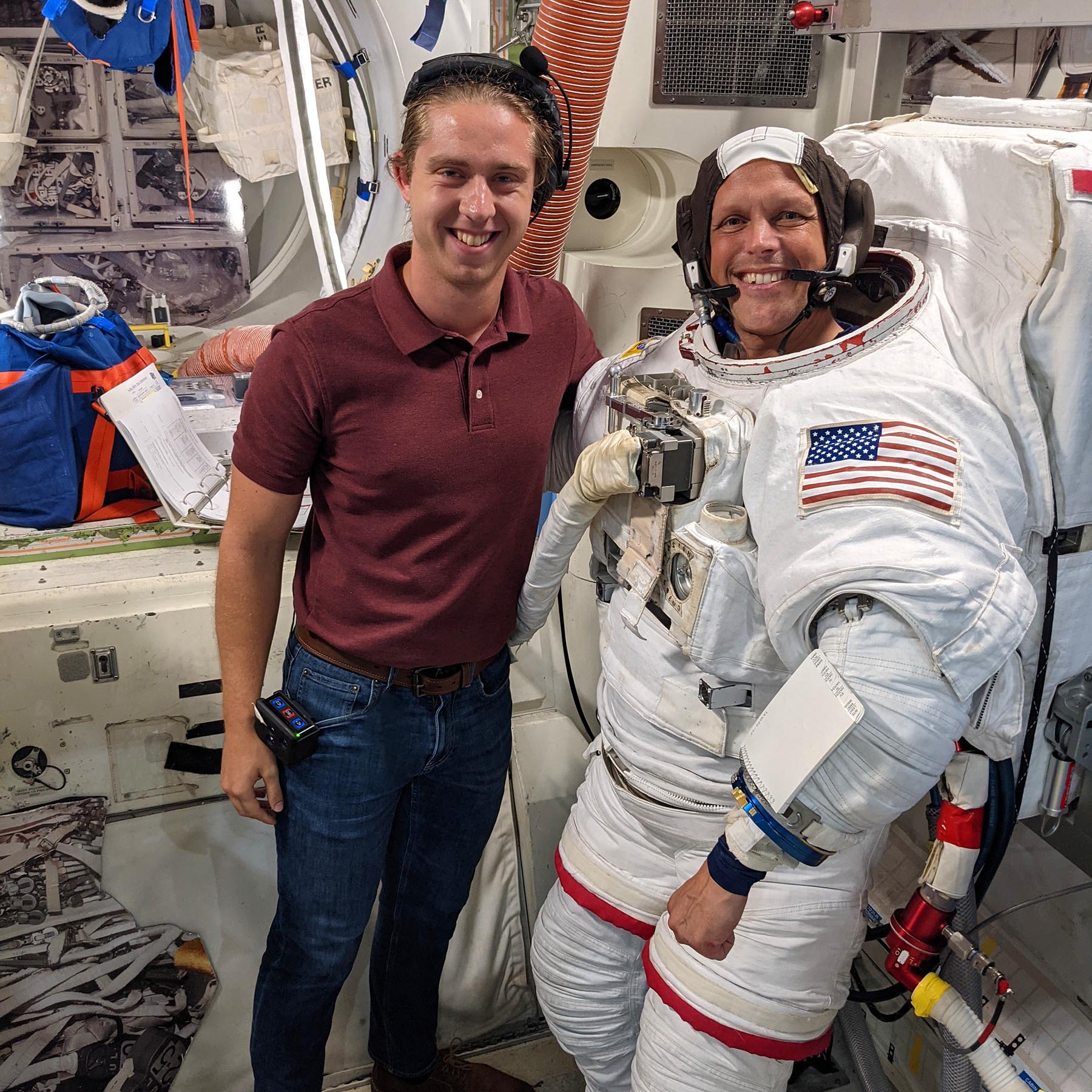 In cooperative education, students commit 3-5 semesters to a company, alternating between working full-time and attending class at Purdue. In return for the commitment, students get a full-time paid position, and gain invaluable real-world experience while building their professional network.

“NASA co-ops are particularly unique,” said Karl, who had heard about NASA’s Pathways program from a friend. “You get experience in several different areas, so you can choose what you want to eventually pursue.”

Karl began working for NASA in spring 2020, starting in avionics and flight control for the International Space Station. His highlight during that rotation involved sitting at the Mission Control console during undocking of the Cygnus NG-13 spacecraft in May 2020 – to which he admitted to more than a little trepidation. “The first time you walk into Mission Control, you ask yourself, ‘why am I here?’” he said. “But it’s such a cool feeling to swipe your badge in, and feel like you belong.” 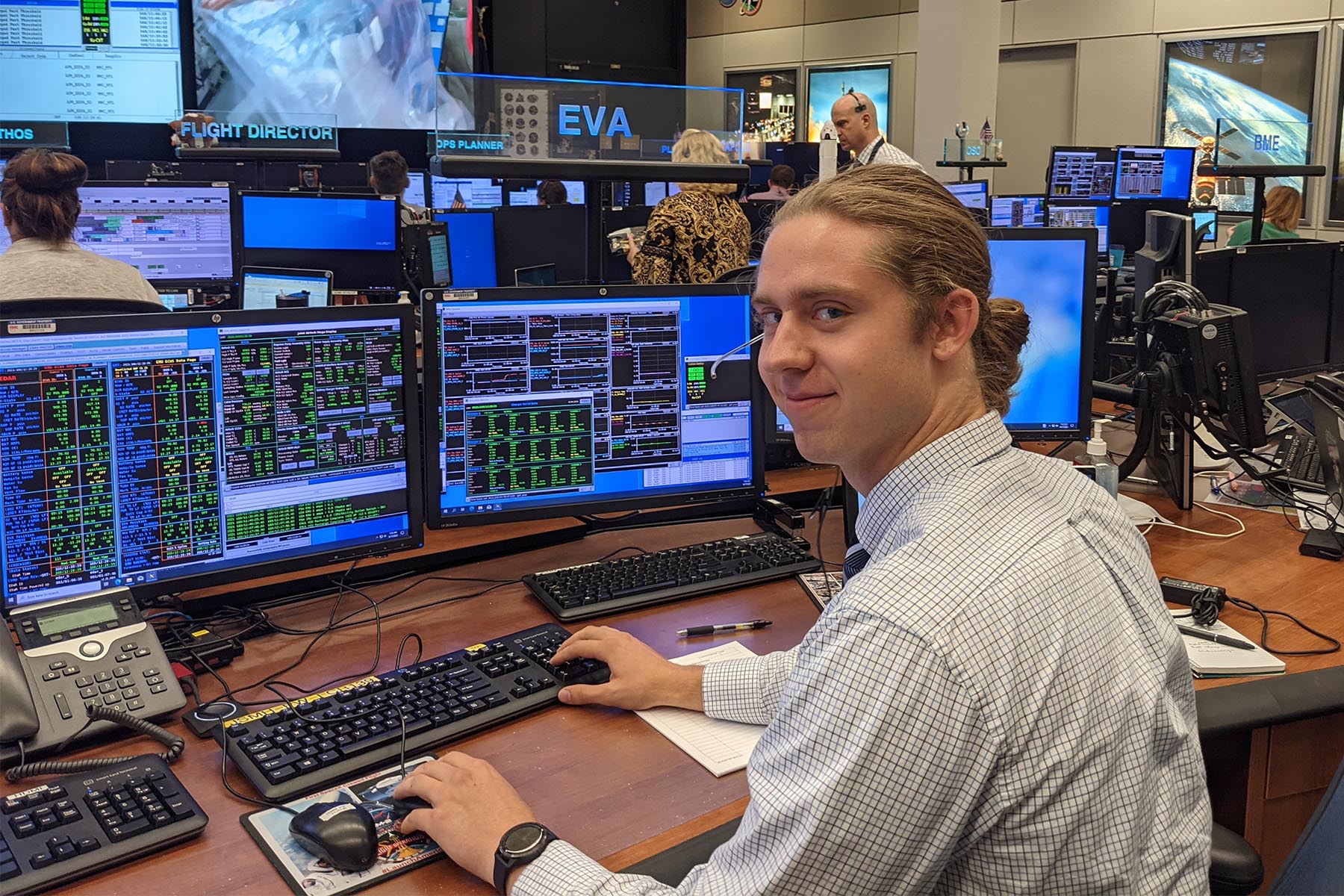 After this experience, Karl wanted to try something more unique: spacesuits and EVAs (extravehicular activities).  “These are very niche areas,” said Karl. “You can’t go anywhere else and get experience in spacesuits. So I definitely wanted to take advantage of this opportunity.”

Unfortunately, COVID lockdowns were in full force during that summer. But NASA worked with Karl to enable him to continue his co-op remotely from Indiana. And he wasn’t just doing busywork; he contributed to two huge spacesuit-related projects. One involved validating an anti-fog coating for the inside of the helmet; another project consisted of building a full-size volumetric model of a spacesuit to test the designs of embedded communication antennas. “It was tough getting to know my team, because I was working from home,” said Karl, “but a lot of us were in the same boat. They were really great, and they helped mentor me through all these projects.”

His next co-op semester came in spring 2021, working at Johnson Space Center in Houston. He began with the EVA Tools team, working on the various implements astronauts use during their spacewalks. “There are so many steps to conducting a successful spacewalk,” Karl said. “It all starts with the pre-planning, where we build a checklist of every single action taken during their EVA, and every single tool that needs to be used. We have to learn everything inside and out, so we can then teach it to the astronauts.”

The highpoint for Karl came during a procedure to swap out a new camera-and-light module attached to the spacesuit’s helmet. “I wrote a procedure on how to install the upgraded camera assembly, and filmed a step-by-step video that showed crew members exactly how to do it,” he said. “Then I got to uplink that video to the Space Station to make it happen! That was pretty cool.” 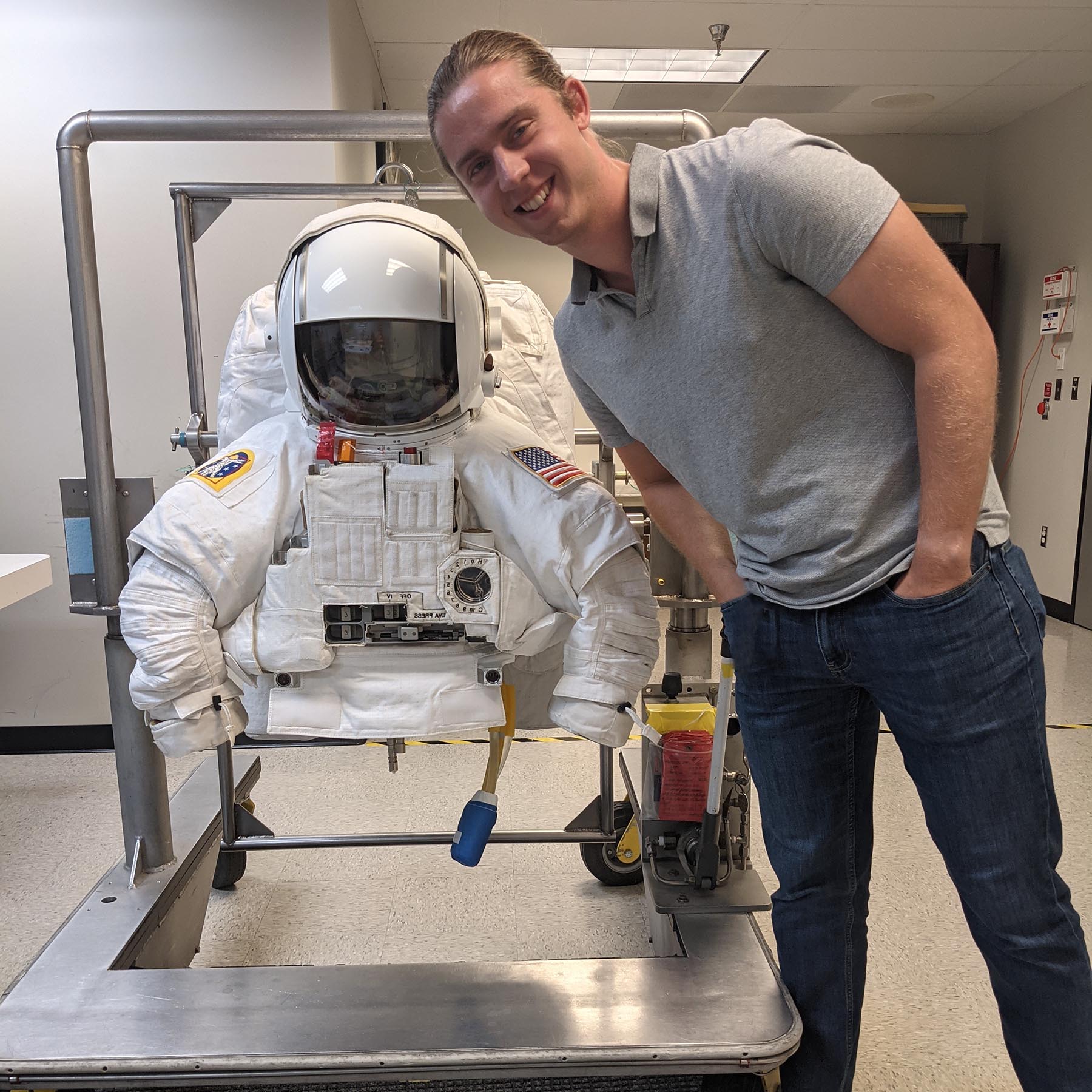 His next rotation developed his EVA skills even more, as he transitioned into the EVA Flight Control role. During the three spacewalks in the summer of 2021, Karl was at Mission Control, remotely monitoring every vital bit of telemetry from the spacesuits. “My biggest takeaway from that was just learning and observing,” said Karl. “These flight controllers know their stuff, and my job is to do the small things that support them, as they support the astronauts.”

“NASA really showed me how important it is to work well on a team,” said Karl. “They always tell you here at Purdue how important it is to build those teamwork skills. At NASA, you don’t do anything on your own; you’re always working with others. So you have to have good communication skills, and sitting at the Flight Control desk was the ultimate lesson.”

Of course, Purdue is well-represented at Johnson Space Center. Karl’s rotation with Space Suit Engineering was under Amy Ross (BSME ’94, MSME ’96), who has led that department since her own NASA co-op in the 90s. “Everywhere I went, I saw people with ‘Boiler Up’ signs, or an ME hammer sitting on their desks,” said Karl.

Karl has no regrets about making a 5-semester commitment to NASA. “The biggest reason I go back to NASA is because they don’t treat me like a temporary hire; I’m a member of the team,” he said. “They give us so much information, training us in so many areas. They know that I’ve made a commitment as a co-op student, so I already know the culture, and already know the workflows. And hopefully, they’ll want me to come back full-time after I graduate.”

Karl still has one co-op session remaining next summer, when he’ll head back to Houston to work at the Neutral Buoyancy Lab, the large swimming pool where astronauts train in near-weightless conditions. “The cool thing is they’re getting ready to start lunar training for the Artemis program,” said Karl. “So we’ll be setting up lunar environments and getting the next-generation spacesuits ready to go back to the Moon.”

Karl says he wants to work in human spaceflight after graduation, and his co-op experience has given him a firm foundation toward that goal. “NASA is unique, because it’s very mission-based,” said Karl. “Everyone is focused on their specific project, whether it’s spacesuits, or flight control, or EVAs. But they are all working on a common goal, which is to get humans into space safely.” 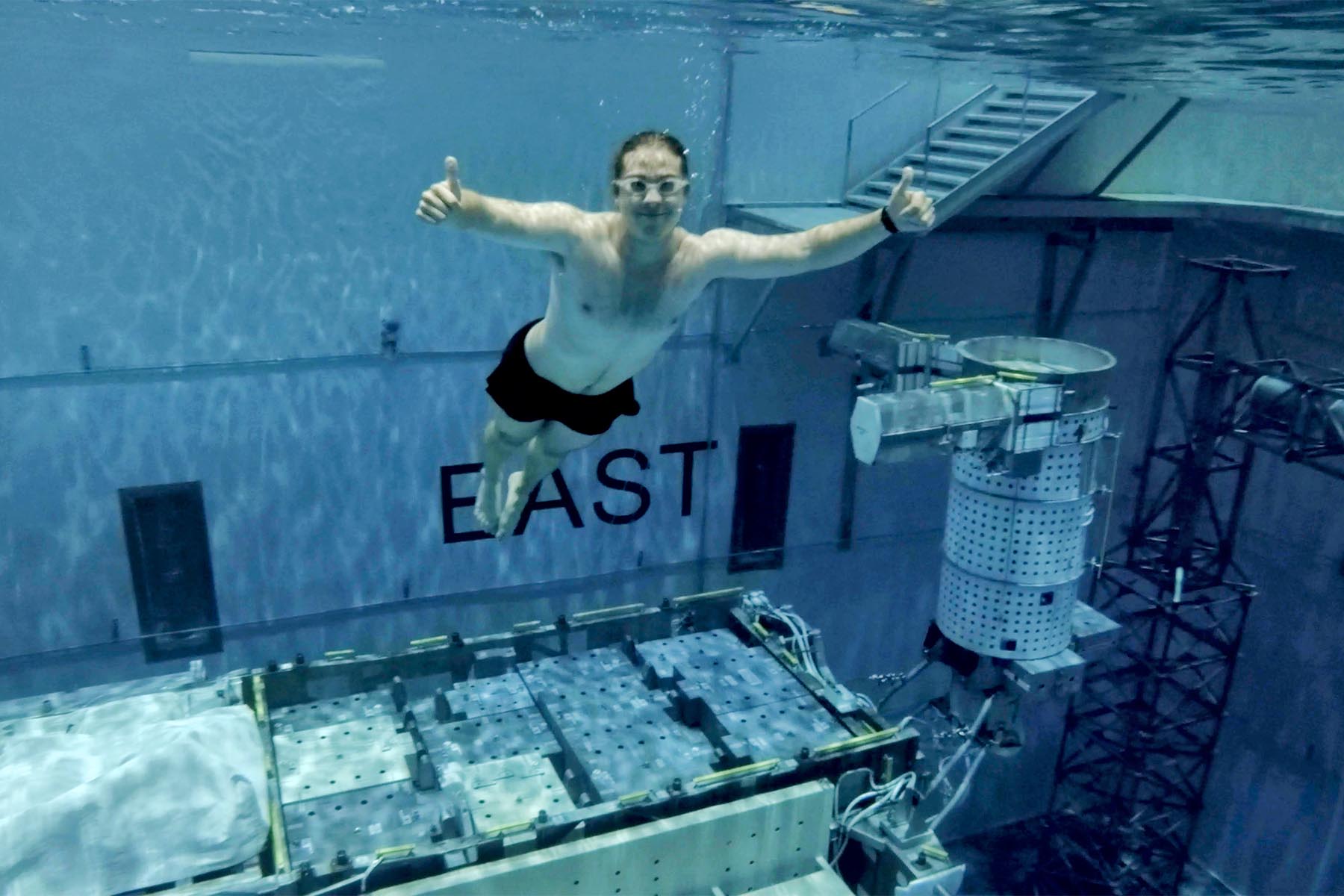 Interested in doing a co-op? Contact Julia King (juliaking@purdue.edu) or visit the Office of Professional Practice to learn more!