The downside to changing the face of modern electronic warfare is that afterwards, you can't tell anyone how you did it! Such is the success of Bill Conley (BSME '03, Ph.D. '09), who utilized his Purdue Engineering experience by shaping future technologies at DARPA, the Pentagon, and now, private industry.

“I blame my mom, who got me Legos when I was a kid!” jokes Bill, who despite growing up in West Lafayette, Indiana, had no Purdue connections in his family. “Then I disassembled my bicycle when I was 11, but all I learned was that it’s hard to find ball bearings once they fall in your front yard!”

In high school, his mechanical shenanigans continued. One day he destroyed the undercarriage of his car by driving over an exposed manhole cover. Desperate, he turned to the head of the student machine shop at West Lafayette High School, Steve Florence. The two patched up the belly pan, and Bill was able to drive it home. “My father was not happy,” remembers Bill, “but he understood once we took the car to a mechanic, and the guy said, ‘This actually looks pretty good.’” 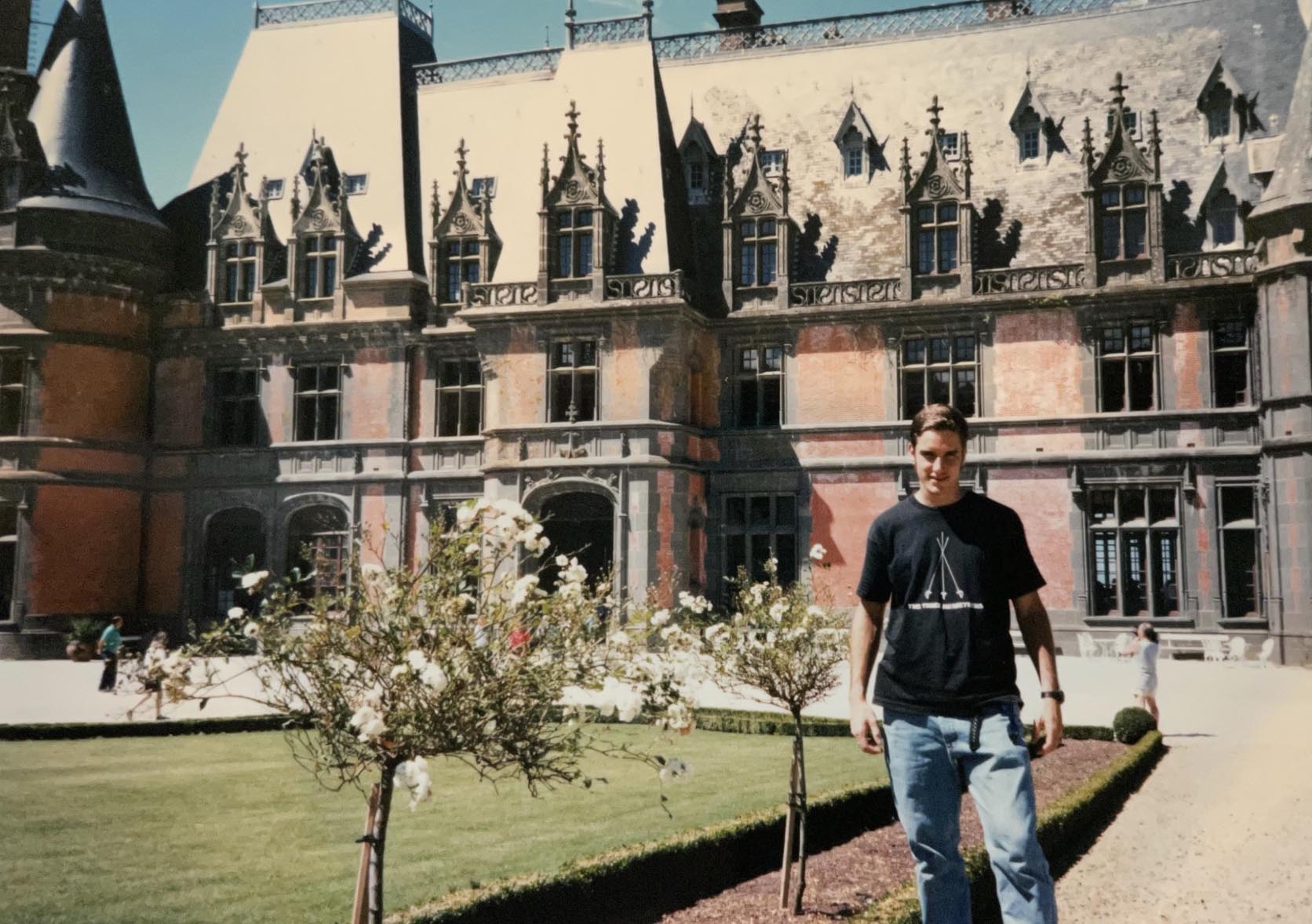 While Steve Florence would later become the head of Purdue Mechanical Engineering’s student machine shop, Bill initially chose another path. He decided to move out west and attend Whitman College, a small liberal arts school in Walla Walla, Washington. That’s where something happened that would change the trajectory of his life in multiple ways: a snow skiing accident at age 21, which left him paralyzed from the waist down.

“I had just finished my undergraduate degree,” says Bill, “and it changed everything I thought my life was going to be. What does this mean for me? That was a horrible time, but it also gave me a tremendous gift. It allowed me to step back and reflect: am I on the right trajectory and doing what I want to do? Ultimately, that’s what led me back to West Lafayette, to study mechanical engineering at Purdue.”

So while he adjusted to his new life as an engineering student, he also had to adjust to navigating 1930’s-era Purdue buildings in a wheelchair. “The ME Building wasn’t too bad – it had elevators and ramps,” says Bill. “The staff and faculty were super accommodating. When I became a grad student, my office was on the ground floor. Simple things like that.”

It also helped that many Purdue engineering classes involved group work. “In my senior design class, my team was building a hovercraft,” says Bill. “Does everyone in the group need to be able to slide underneath and tighten that one hard-to-reach bolt? No, you only need one person to do that. Do you need everyone to reach the top shelf? No, only one person has to do that. Does everyone need to write the code? No, that can be one person’s specific job. Teamwork really made my education no different than anyone else’s.”

“I found Purdue to be a natural fit,” remembers Bill. “Having all these world-class faculty, staff, and research facilities, it’s kind of like a Choose-Your-Own-Adventure book. You have the ability to pursue the things you’re interested in, and learn from the best of the best.”

Early in his Purdue career, Bill knew that research would be a vital part of his ‘adventure.’  Professors Arvind Raman and Chuck Krousgrill reached out to him and asked if there was a subject he was interested in understanding more about. Bill had questions about the relationship between friction and heat – a simple question to ask, but difficult to fully answer. “Just having that dialog,” says Bill, “asking the question, and determining what it takes to really understand it – that really led me down the path to my studies in physics, applied mathematics, and mechanical vibrations.” 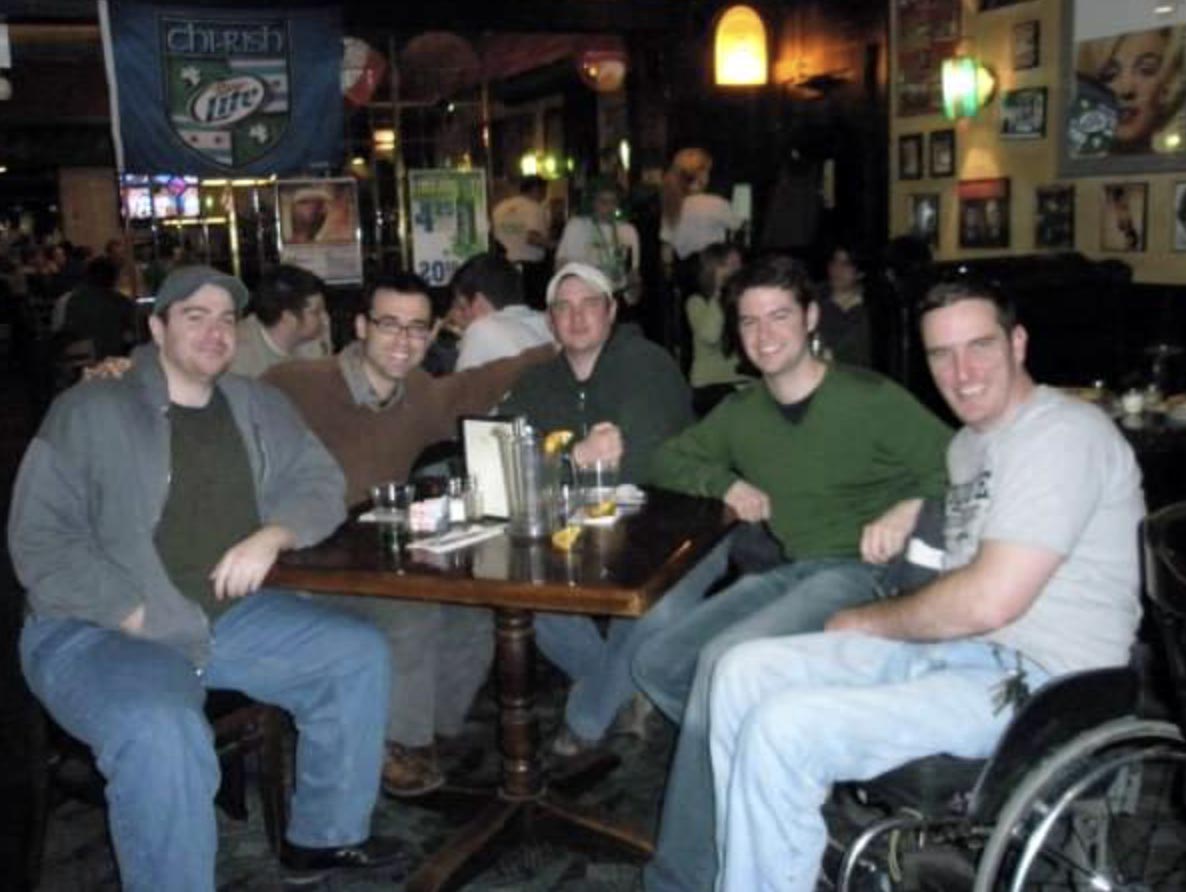 The future of warfare

While tackling that Venn diagram of impossible theoretical problems, Bill kept an eye out for practical ways to apply his knowledge. In the mid-2000s, wars in Iraq and Afghanistan had claimed thousands of lives, many of them from IEDs (improvised explosive devices). After his Ph.D. in 2009, Bill stepped into a Department of Defense role at Naval Surface Warfare Center Crane Division in southern Indiana, studying electronic warfare. “I was using the same tools and techniques I learned here at Purdue, but applying them in very different ways,” says Bill. “Typically when you’re an engineer, your job is to make sure things work reliably. But when it comes to IEDs, your job is to deliberately disrupt that network to make sure they are not successful.”

“The work we did at Crane absolutely made a difference,” says Bill. “We know that we made life safer for our soldiers, as well as our partners in Iraq and Afghanistan. Understanding the threat, and understanding what was necessary to defeat it, resulted in many lives being saved.”

The job also steered Bill away from the workbench, and more towards an overall holistic understanding of technology – projecting which specific fields would emerge as important in the future. That led him to a job as Program Manager at DARPA (Defense Advanced Research Projects Agency), a branch of the Department of Defense focused on future technologies. “If you understand how to study the rate at which technology is changing, you have a good chance of figuring out what will happen in the next five years or ten years,” says Bill. “From that, DARPA seemed like a natural fit.”

His efforts at DARPA got the attention of the Pentagon, and two years later, Bill was appointed as the Director of Electronic Warfare for the entire Department of Defense, with a $7 billion portfolio as his purview.

Overseeing technologies for one of the largest armies in the world, from the largest office building in the world – how on earth do you get anything done? Bill provides an analogy from his Purdue days: “Bureaucracy in Washington is a system. And like any system you study in your Controls class, it has inputs and outputs, and in the middle are gain loops and dampers. Delays show up. To make any progress, we need to understand that system – what input do you feed into the system to achieve the output you want, with the delay that’s built in? It’s no different than a manufacturing process, controls for an autonomous vehicle, or any other complex system. A human-based network of this size may seem like a huge and impenetrable system, but it actually allows the government to make structured decisions on very complex and difficult problems.”

He continues: “I remember being in Boy Scouts, and our scoutmaster told us: ‘If you don’t like what’s happening, join the leadership team and go fix it.’ I think engineers have a natural inclination to fix problems. We have the ability to step in and say, ‘this is what needs to happen.’ It’s no different than a design review on a technical project. That’s why the world needs people like us in leadership positions.”

After four years at the Pentagon, Bill was ready for the next challenge. “I believed that I had moved the football as far down the field as I could,” he remembers. “The real innovations in research and development are now coming from the private sector.”

Today, Bill serves as the Senior Vice President and Chief Technology Officer for Mercury Systems, an aerospace and defense contractor based in Arlington, Virginia that focuses on microelectronics. “It’s one thing to design a computer to function on a 75-degree day,” says Bill. “It’s a completely different challenge to design a computer to fit in a storage container and go on a ship, or to the edge of space; do it multiple times; and work 100% reliably the moment you take it out of the box. It presents a whole bunch of really hard problems to solve, but that’s what we thrive on.”

“My role as CTO is an amazing job,” he continues. “We’re always looking forward to what the future needs may be. What’s going to be disruptive or different about the world in the next few years? We need to not only understand that, but be able to support it with real-world technologies.” 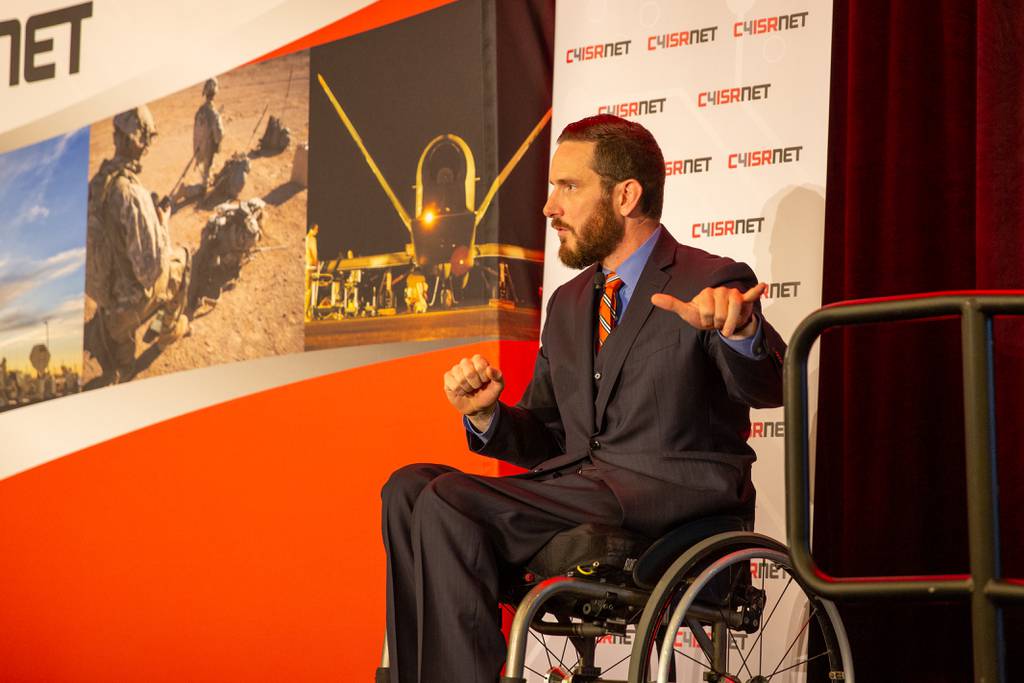 Today, Bill Conley’s expertise is often called upon by the largest of stakeholders. In March 2021, he testified before the House Armed Services Committee on the “Challenges and Opportunities in the Invisible Battlespace.”

“When you look at the evolution of warfare over the last century, it’s remarkable how much of it has become electronic,” says Bill. “Radar shows you where it’s safe to go. Networking and communications keep people connected. Working in cyberspace operations is now a really profound part of national defense. If we can deter any amount of conflict using non-kinetic non-lethal means, I think it’s very valuable and very important.”

“Personally, I love working in the national security space,” he says. “We are making the world safer. We work on technology that allows someone to go home to their families at night. That makes a humongous difference for me.”

Purdue also formally recognized his work in September 2021, granting him the Outstanding Mechanical Engineer award. With his machine shop cohort Steve Florence in attendance, Bill described why engineers are critical in the national security space.

“One of the critical things we learn as Purdue Engineers is to start by stating the problem and our assumptions,” he says. “From that, we can derive the art of the possible in how to solve that problem. If an assumption changes, you may come up with a totally different solution – whether it’s a technology problem, a business problem, or a human problem. I spend a surprising amount of time in my day-to-day life working through those assumptions to come up with the best solutions.”

He also stresses that everyone’s journey is different: “There are some days when you wake up and pinch yourself and ask, how did I get here? Everything that came before, worked together to bring me to this point. We all take individual small steps, building knowledge and intuition, which we can then go apply to a problem, whatever it may be. I would not be here today if it weren’t for Purdue.” 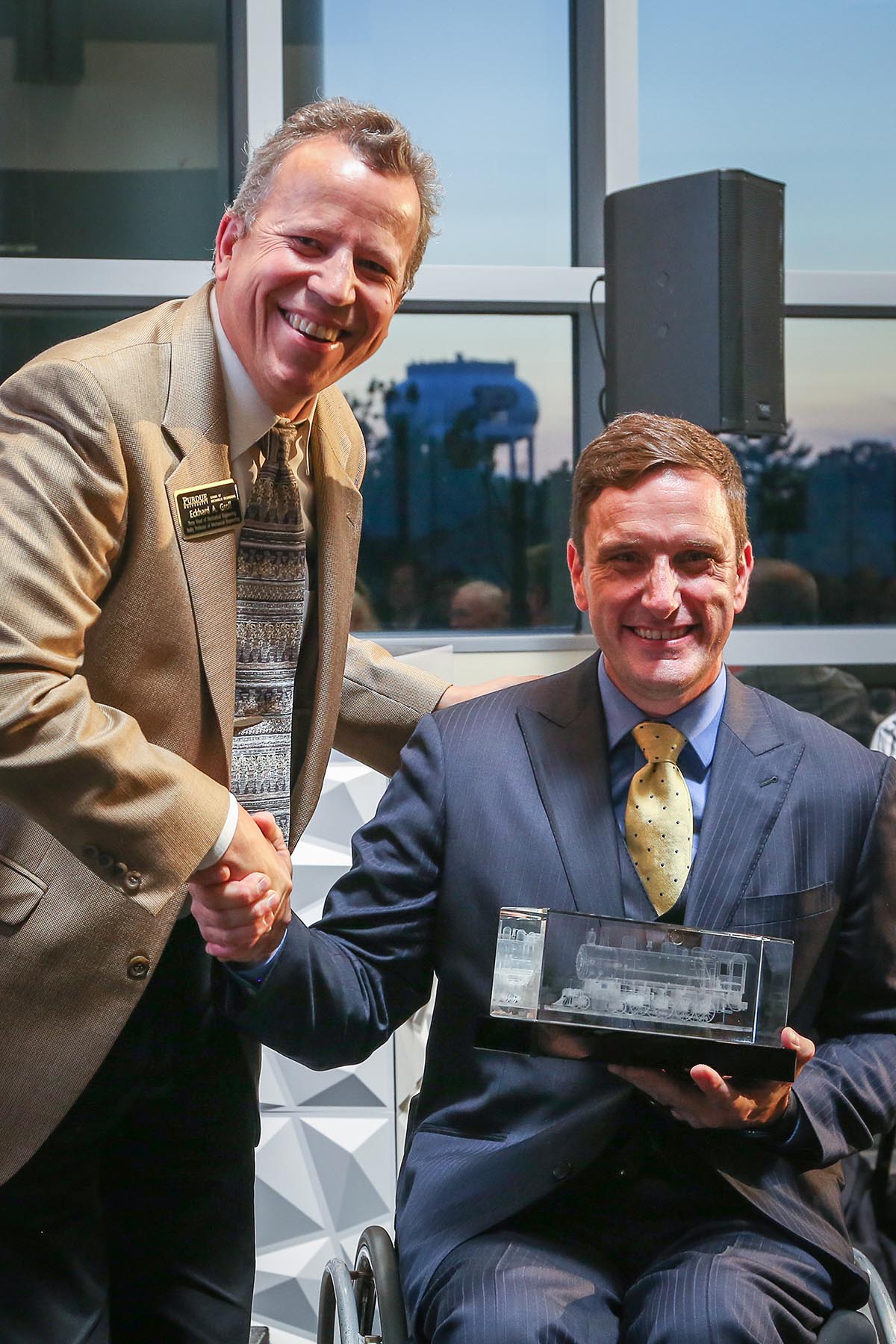 Bill Conley receives the Outstanding Mechanical Engineer award from the head of Purdue ME, Eckhard Groll, in September 2021.