Frank Lee is probably the only refrigeration technician in history to perform his job in zero gravity! After 25 years of service as an engineering technician (on the ground) at Purdue's Herrick Labs, Frank helped to test a new zero-gravity refrigerator prototype for NASA by embarking on a series of parabolic test flights. 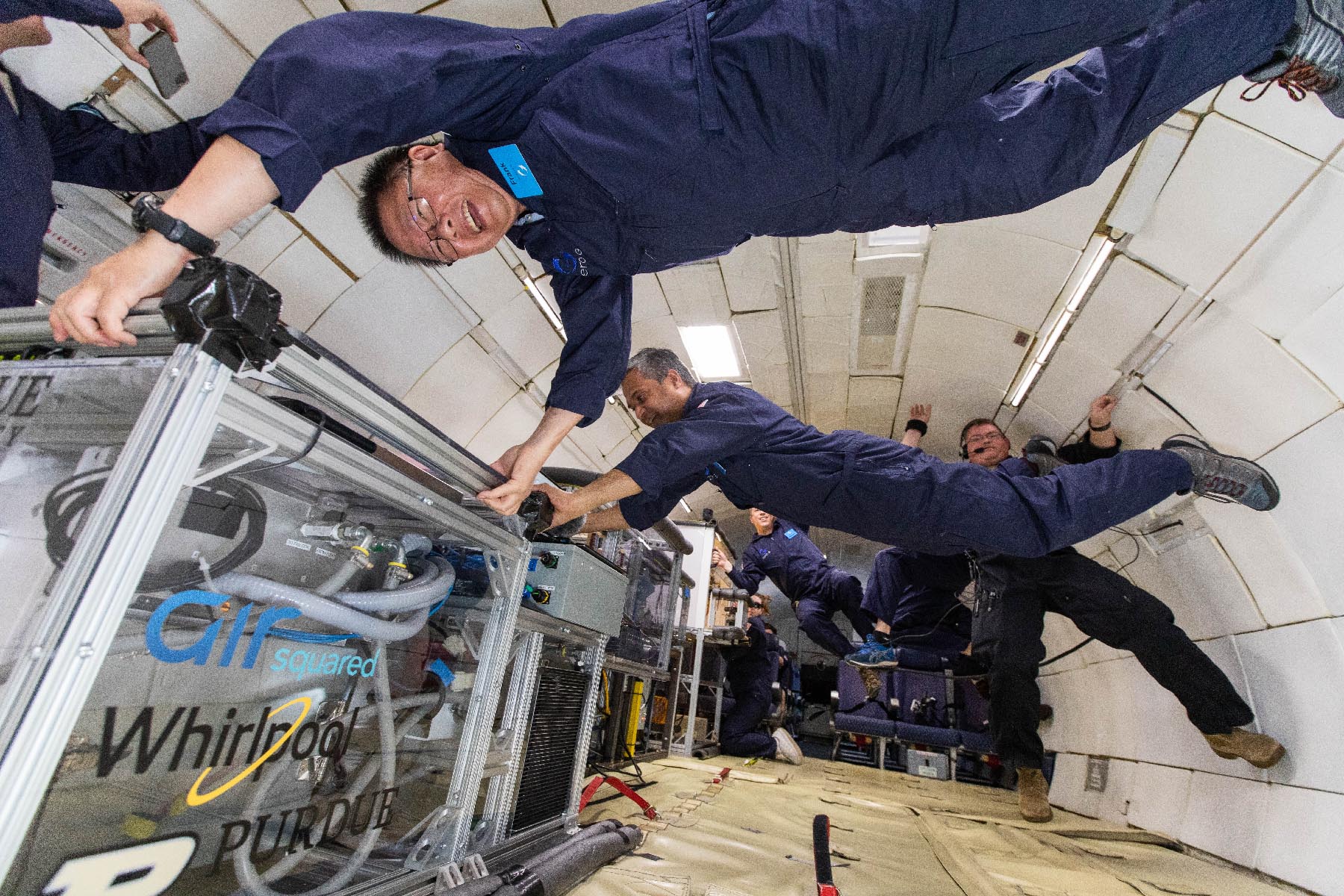 “As a kid, I was always taking things apart and putting them back together,” says Kwok Wai (Frank) Lee, who grew up in Hong Kong. After some vocational training, he started to focus on refrigeration, as well as heating, ventilation, and air conditioning (HVAC). He came to the United States and found a job at a company that made electrical meters. After that job fell through, Frank heard about Purdue University.

“There were no online applications back then,” says Frank. “I visited the HR office to apply in person. And they called me back at night... because there were no cell phones!”

He worked at Purdue’s utility plant for a year, but found it didn’t really match his skillset in HVAC. That’s when he learned about Herrick Labs, the largest academic HVAC lab in the world. In 1996, he joined the Herrick team as a technician. With dozens of faculty and grad students conducting research in refrigeration and HVAC systems, it’s Frank’s job to oversee the hardware of the experiments themselves, doing whatever it takes to make sure all the equipment runs smoothly.

“At Herrick, we do everything in-house,” says Frank. “Pumps, electrical, HVAC, welding... we build all our own experiments. So there is a lot of work to do. No matter where I’m hiding in the building, they find me!”

“Frank is indispensable,” says Jeff Rhoads, the Director of Herrick Labs. “He’s been with us so long, he knows how to get things done. As time goes on, his contributions have grown tremendously, and we are so lucky to have him.” 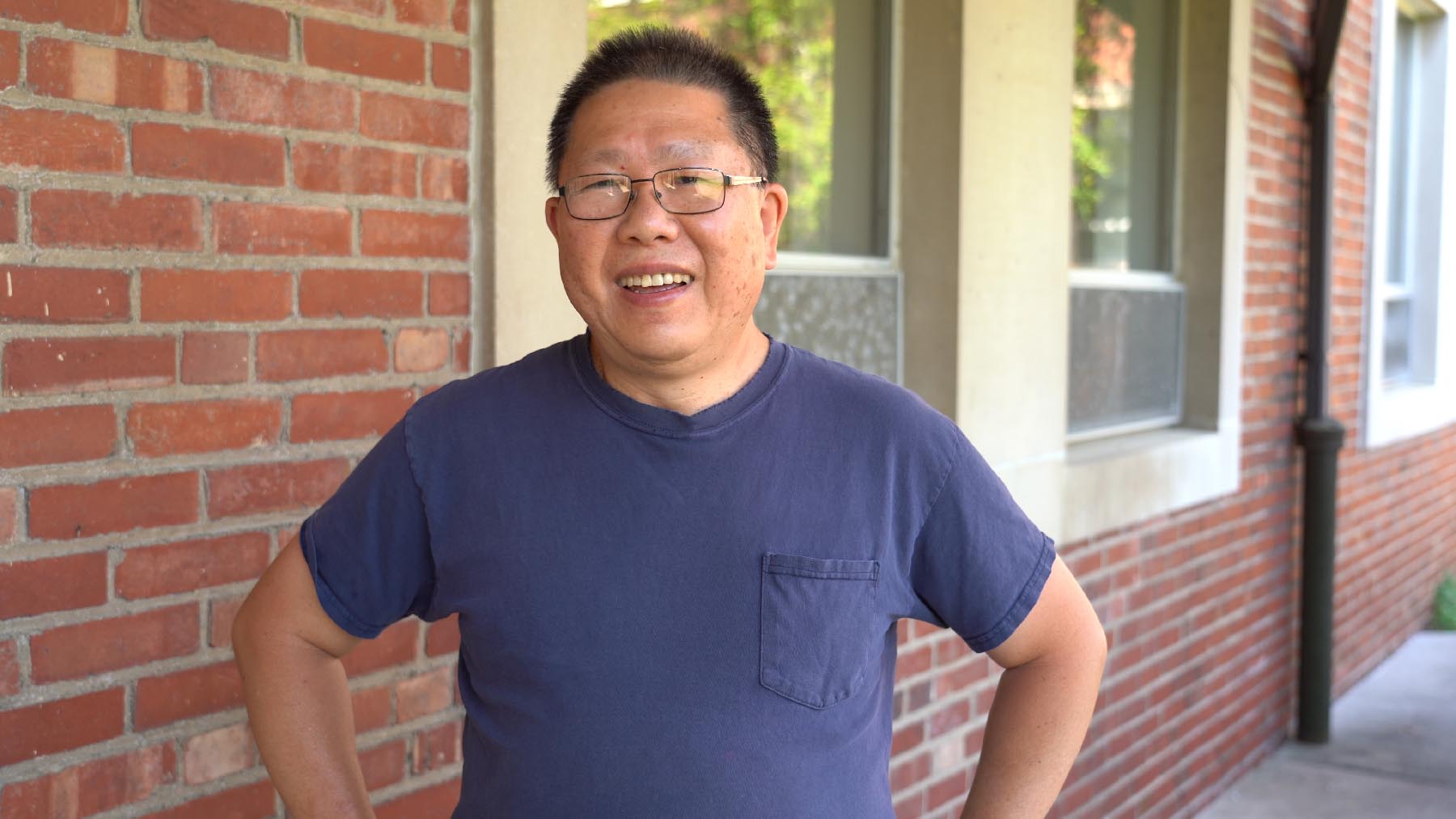 When Frank first saw Ph.D. student Leon Brendel’s plans for a refrigeration experiment, it looked like many other compressor tests he’d seen in his 25 years at Herrick. But this one was different.  NASA wanted a refrigerator that could function in zero-gravity, where liquids and gases behave differently. So Leon was planning to build a fridge that could be turned completely upside-down, to test the effects of gravity in different directions.

“Frank was a huge help in bringing this experiment to life,” says Leon. “He helped me install the piping and the electrical components, and we worked on making it compact and secure enough to rotate 360 degrees.”

It was a massive project, taking them a year and a half to build. When they finished the prototype, they had another surprise in store: NASA wanted to test it on a zero-gravity test flight. Leon and another student would be testing the apparatus on a plane that flies numerous up-and-down parabolas, giving them several 20-second segments of zero gravity.

“We asked Frank to come with us to Florida, because nobody knows this equipment better than him,” says Leon. “He helped us configure everything in the plane beforehand, so I could focus on the research during those brief 20-second periods of zero gravity.”

Frank was happy just to have been asked on the Florida trip, but his adventure wasn’t done. On the final day, they asked him to accompany the students on the zero-gravity flight. “I wasn’t really planning on it,” says Frank. “But after watching some of the videos on YouTube, I thought it looked exciting, so why not?”

A typical day on the ZERO-G plane consists of about 30 proper parabolas, spread out over an hour or so. “For the first few, I just laid still,” says Frank. “But then I started to get the hang of floating around. Everyone is screaming, they’re so happy. It was so much fun. By the time I had it mastered, the flight was over. I kept asking Leon if he needed more data, so we could go again!”

“Frank definitely deserved to see the fruits of his labors in person,” says Eckhard Groll, Leon’s faculty advisor who originated the experiment and also went on the final zero-gravity flight. “It’s because of all his hard work on the ground at Herrick Labs that we were able to conduct such a successful test in the air.”

“I made sure all the equipment was secure, and nothing was floating around... except me!” Frank laughs.

Frank says he’s thrilled that his work may someday end up on a long-term spaceflight, keeping food fresh for astronauts. “When they start going to Mars, put me on the list! I’ve had my first flight, so I’m ready to go!”

“My favorite part of this job is working with students,” says Frank, who was recently promoted to Lead Engineering Technician at Herrick Labs. “They are always bringing in new ideas, and new components to test. The basic concepts of refrigeration haven’t changed in 150 years, but the new technology and new approaches make everything exciting. That’s the fun part of working at Herrick Labs, because every day is different!”