While sending humans into space is impressive, bringing them back safely to earth is the true accomplishment. And all crewed space capsules return the same way: by parachute. Aaron Comis is a NASA parachute engineer who works with Boeing and SpaceX to bring those astronauts home safely.

Aaron, now an online master's student at Purdue, grew up in southern California, more interested in hot rods than rockets.  “I wanted to be an automotive engineer,” says Aaron.  “I loved working with my hands. It wasn’t until I joined a satellite club in college that I became interested in space.”

While at Cal Poly San Luis Obispo, Aaron joined Polysat, a student club that builds and launches cubesats. After a year of working with space technology, he was hooked. “After that, I applied to the Pathways program at NASA, and got an internship at Johnson Space Center,” says Aaron. “And I’ve never looked back!”

NASA internships are famous for exposing students to many different areas, and Aaron’s experience was no different. In his first session, he helped solve a hardware issue for astronauts on the International Space Station by using the bottle opener on a Swiss Army knife. Next, he worked in the Rocket Propulsion Group, including traveling to Stennis Space Center in Mississippi for a series of engine tests.  After that, he transitioned to the Future Exploration Vehicles group, focused on building the next generation of vehicles to carry humans into space: the SpaceX Crew Dragon, the Boeing CST-100 Starliner, and NASA’s own Orion capsule.  “When I was there in 2015, all three vehicles were still in initial development,” said Aaron. “So I had the opportunity to gain insight into operational development, as well as working closely with commercial vendors like Boeing and SpaceX.”

That spirit of collaboration proved to be vital when Aaron graduated into a full-time career at NASA. “One day my director tapped me on the shoulder and said she had a job for me,” remembers Aaron. “She asked me to go on indefinite rotation with the Engineering Directorate, to support the development of the parachute systems for the Commercial Crew Program. I’ve been working as a parachute engineer ever since.”

While parachutes seem like an established technology, studying them as an engineer involves many layers of complexity.  “It’s not easy to become an expert on parachutes through literature and study,” says Aaron. “We’re dealing with structural soft goods that self-deploy, and have to become primary structure in less than a second. That’s extremely difficult to model or simulate. There are so many variables involved that you have to go empirical; you have to test it.”

Aaron attended dozens of these tests, usually involving a test capsule being dropped from an airplane, deploying its parachutes, and landing in the desert. “As a NASA engineer, I was there for insight and oversight for Boeing and SpaceX,” says Aaron, “But I also supported hardware recovery. We did ground inspection – taking photos of the parachute as it landed after the test, to discern if any damage came in the air, or from landing in the desert. Then later, we took the chutes into a controlled environment and inspected every inch, documenting every single missing stitch. These are empirical tests, so if the hardware is speaking to you, you need to be listening.” 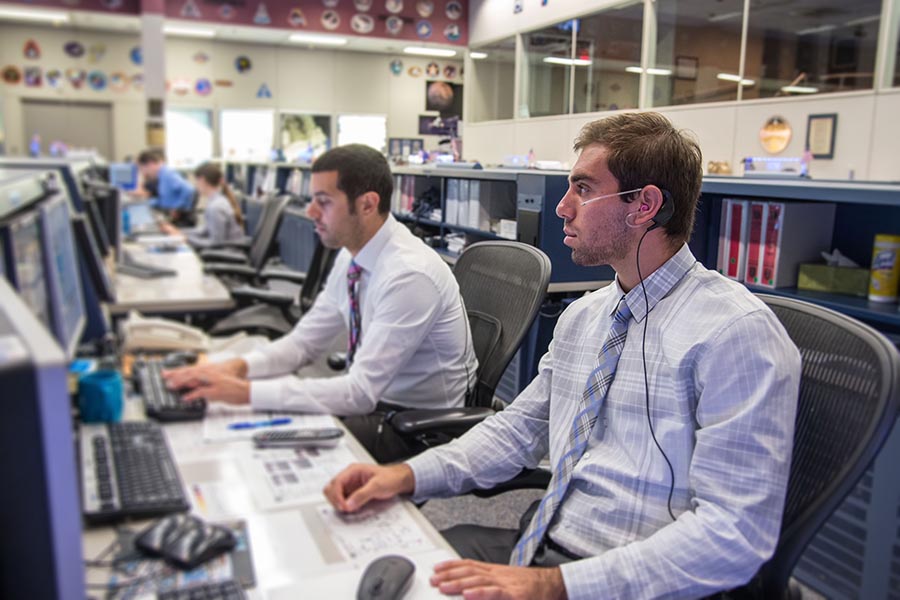 After NASA had certified the parachute systems, the next big step was a proper launch. SpaceX launched an empty Crew Dragon capsule as part of its Demo-1 mission on March 2, 2019, which autonomously docked at the International Space Station. Five days later, the capsule undocked and began its descent back to earth. That’s when Aaron’s work was put to the test, as he recalls: “For Demo-1, I was in Mission Control in Houston, with Bob and Doug on either side of me.” [Astronauts Bob Behnken and Doug Hurley were the first humans to ride in Crew Dragon on the following mission, Demo-2.] “We were all huddled around these screens, watching the descent, and I was walking through it with Bob and Doug every step of the way: ‘Here’s where the drogues deploy.’ ‘It takes this much time for the mains to open.’ Then we had splashdown. It was a safe and successful mission.”

Watching the event live might have been stressful, but Aaron feels it was an important step in such a historic mission. “I was definitely holding my breath,” says Aaron, “But we had done so much testing, we had every confidence in success. We put in so much work with NASA, SpaceX, and all the stakeholders to make sure every possible thing had been looked at. But it was a unique experience to be there with Bob and Doug, knowing that they will be flying under these parachutes next time. It definitely put things in perspective.”