"Flat pack furniture" may soon have a new meaning. Purdue researchers have developed a 3D printing method that emulates the switchable bistability of the Venus flytrap plant. This breakthrough in material science may soon inspire flat objects that snap into their final stable form with very little external force.

“A bistable structure is one that has two stable states,” said Katie Riley, Ph.D. student in the School of Mechanical Engineering.  “Think of a snap bracelet.  As a flat piece, it’s stable. It will stay in that shape by itself without you holding it. But if you bend it a little, it snaps to being rolled up, and this curved shape is also stable.”

This fast shape change also exists in nature, most notably in the Venus flytrap plant.  “The Venus flytrap’s leaves can snap from open to closed very quickly,” said Riley.  “This is largely because the leaves are composed of two layers of cells, each pre-stressed in a direction perpendicular to the other.  So it only requires a small input to morph from one state to the other. The pre-stress directions also change throughout the leaf, allowing it to exhibit the complex curvatures that let it enclose prey."

Reproducing such fast, complex shape change with synthetic materials has been difficult.  But Riley works with assistant professor Andres Arrieta in the Programmable Structures Lab, located at Herrick Labs. They have been able to utilize 3D printing to create a similar effect. Their research has just been published in the journal Materials & Design. 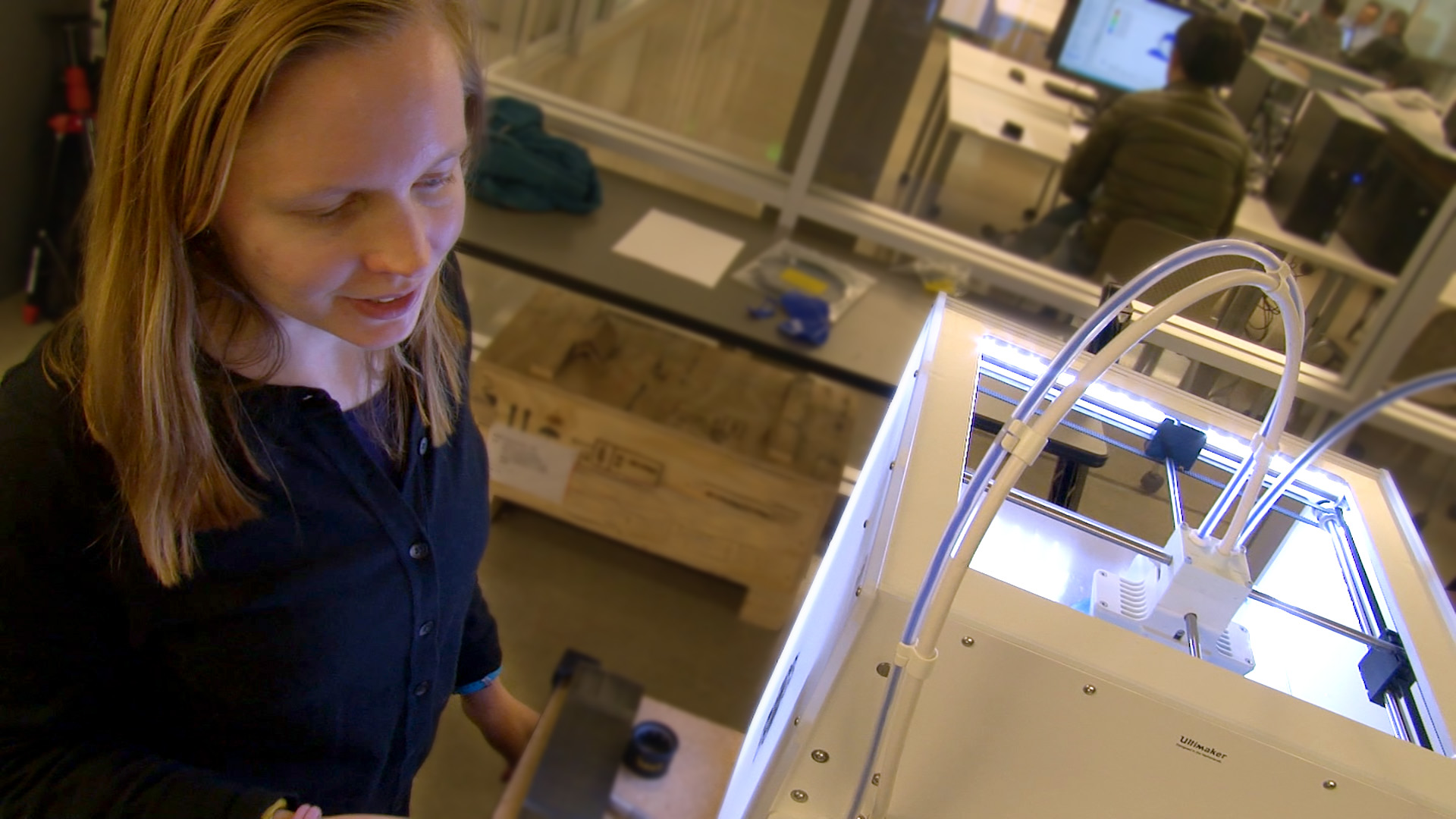 They began by 3D printing a simple square, using off-the-shelf filament made of PLA (polylactic acid).  Riley programmed the printer to print one layer all in the same direction, and then a second layer on top, 90 degrees perpendicular. When the part is heated, the PLA becomes rubbery and stresses from the printing process can be released. The square will quickly deform to a curved shape, and it can then be easily snapped to another stable shape, curved in the opposite direction.  When cooled down, the part becomes stiff and monostable.

This process is unique in that it encodes multiple permanent shapes in a thermoplastic part. Conventional shape change via the shape memory effect in thermoplastics is one-way and one-time only, to a single final shape. With this technique, anyone with access to a 3D printer can make parts that reversibly switch between two or more different stable shapes.

Riley continued experimenting, and created miniature models of furniture.  She designed and 3D-printed them as flat shapes, but when heated, they snapped into the shapes of a chair, a lounge, and a table.  Her team also printed shapes using PLA with embedded iron particles, allowing the shape change to be actuated using magnetism.

“The design flexibility that this offers is really promising,” said Riley.  “Imagine a tile that could be manufactured with many stable shapes programmed into it, but printed as a flat square, which is easy to ship.  Then onsite, it’s heated up, and can be snapped into whatever shape is needed.  When it cools to room temperature, it’s stiff and load-bearing.  This technology could potentially be used for building tiles, furniture, robot grippers, or even aerospace parts.  Smart structures are an exciting combination of structural engineering and programmable materials.”

Conventional methods of programmed shape change in polymers are one-way and one-time only. We introduce a new method of combining a bioinspired, hierarchical architecture with the pre-strain generated by extrusion-based 3D printing to encode multiple permanent shapes in polymer shell structures. At high temperature, these structures are multistable and can snap repeatedly between all encoded permanent shapes without reprogramming. At low temperature, the structures are monostable with increased stiffness; the multistability can be switched on and off via temperature. Characterization studies are performed to determine how to control the level of pre-strain and the deflection behavior of the structure to enable finite element modeling for analysis and design. This pre-straining technique may be thought of as a virtual mold: printed structures are initially flat but have multiple permanent shapes encoded. Taking advantage of the geometric freedom of 3D printing, complex geometries, and pre-strain fields may be used to create highly tailored snapping structures. Thermoplastic filaments with added particles may be used to impart additional multifunctionality to the structures, such as magnetic responsiveness, to enable remote actuation. These switchable multistable structures have potential applications in fields including robotics, aerospace, and smart buildings.