A Purdue University team has just published research that examines the relationship between the active and inactive elements of lithium-ion batteries, and how the micro- and nano-structure of their respective ingredients reflects on the performance and safety of the batteries.

The study was recently featured on the front cover of the journal ACS Applied Materials & Interfaces. 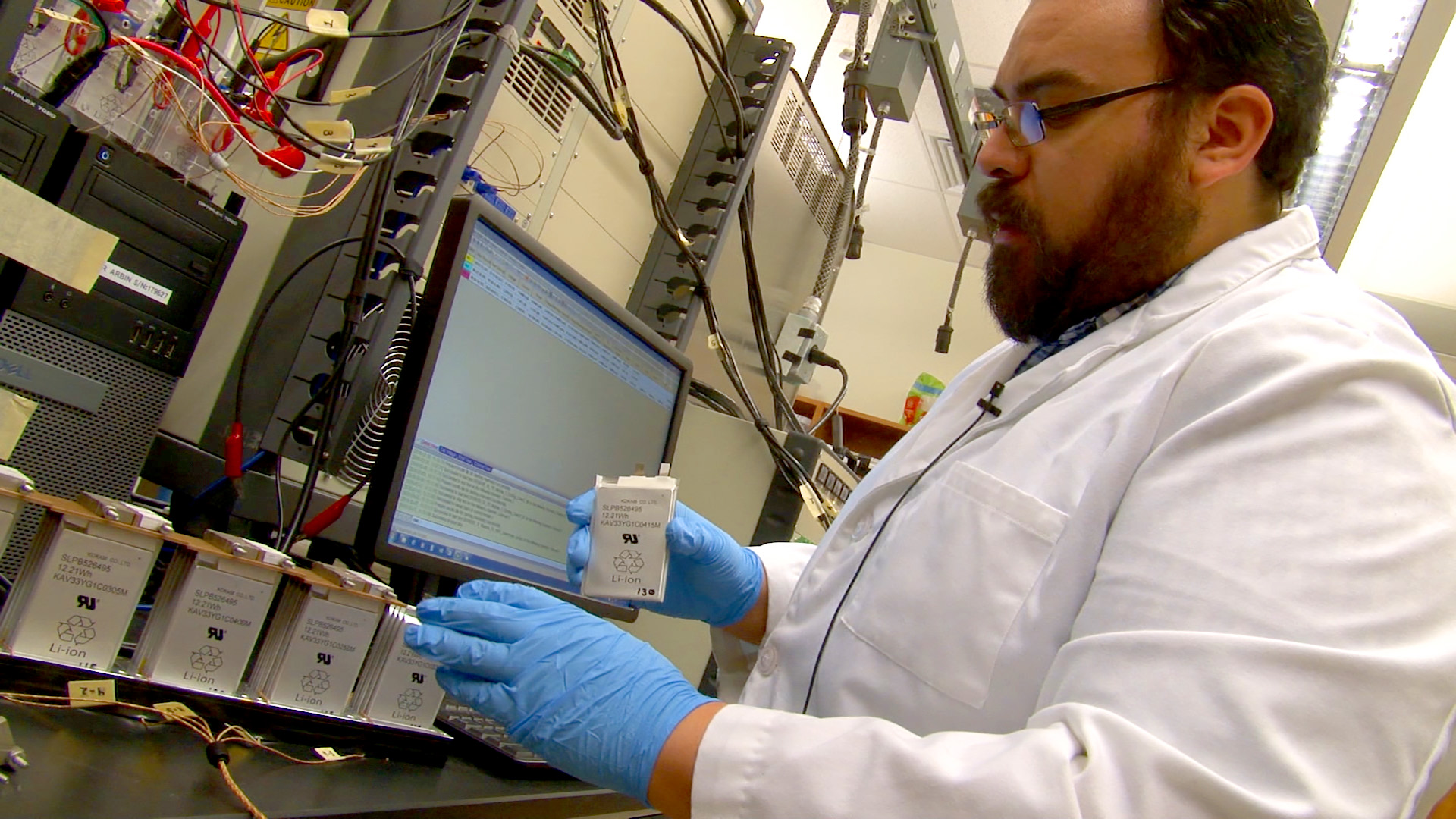 “Rechargeable batteries are everywhere,” said Partha Mukherjee, associate professor of mechanical engineering, and principal investigator of the research. “We probably carry two or three portable electronics with us at all times. But the interactions between the different elements of the battery itself are still not clearly understood. My research hopes to bridge that gap.”

In Mukherjee’s lab, the Energy and Transport Sciences Laboratory (ETSL), they study all forms of energy transport and storage, including batteries and fuel cells. They use computer modeling to propose new configurations of the constituent elements involved, and then test different phenomena in the lab.

“It’s like baking a cake,” said Aashutosh Mistry, Ph.D. candidate in mechanical engineering. “How much dough should you use? How much cherry should you put in so that it tastes nice? In the same way, we look at the fundamental proportions, or the recipe, of these battery electrodes. Anything you change on the microscale ends up affecting the overall performance.”

“Let’s take electric vehicles, for example,” said Mukherjee. “People are interested in three things. Performance: how fast can I drive my car? Life: how long can I drive my car before recharging it? And finally, safety concerns. We’ve seen these batteries fail publicly, in spectacular ways, exploding in smartphones and electric cars. So, all three of these aspects—performance, life, and safety—are very important. It can be a tricky balance getting everything just right.”

Sometimes their lab works on recreating the spectacular failures on purpose. In a typical electric car, the batteries are not one massive unit, but thousands of individual cells wired together. If one fails, what happens to the others nearby? For one test, a sample module of 24 cells (about the size of a brick) was purposely overcharged. One cell exploded, which led to a chain reaction where all the cells caught on fire. “The temperature and pressure inside one cell got so high, it melted the metal casing, which caught fire,” said Ph.D. candidate Daniel Robles, as he held a plastic bag of the charred remains. “In an electric car, there are several thousand of these cells, and these are located underneath your seat! That’s why it’s important to understand the fundamentals of these phenomena, so we can prevent it from happening.”

Rechargeable batteries typically contain a positive electrode and a negative electrode, consisting of “active material” to store lithium. Between the two electrodes is a separator, and there is liquid electrolyte throughout, to transport lithium ions. Finally, a combination of electrochemically inactive materials, such as conductive additives and binders (called the “secondary phase”) helps to shape the physical ingredients in the composite porous electrodes and enhance the electrical conductivity. In the published research, Mukherjee and his team examine the relationship between the active material and secondary phase on the micro- and nano-scale—the porosity, the physical shapes, and their interactions with each other. Altering any of these characteristics results in significant changes in the battery’s overall performance.

“We’re still at a nascent stage in understanding these complex interactions,” said Mukherjee. “But that’s the key to our research. We connect what’s happening at the micro- and nano-scale, to the battery’s performance, life, and safety.” And as rechargeable batteries become more prevalent, their research becomes even more vital. “Batteries are being used everywhere, from portable electronics to vehicles, and even in large-scale electrical grids. This is a great and exciting time to do research in energy storage.”

ABSTRACT: Lithium-ion battery electrodes exhibit complex interplay among multiple electrochemically coupled transport processes, which rely on the underlying functionality and relative arrangement of different constituent phases. The electrochemically inactive solid phases (e.g., conductive additive and binder, referred to as the secondary phase), while beneficial for improved electronic conductivity and mechanical integrity, may partially block the electrochemically active sites and introduce additional transport resistances in the pore (electrolyte) phase. In this work, the role of mesoscale interactions and inherent stochasticity in porous electrodes is elucidated in the context of short-range (interface) and long-range (transport) characteristics. The electrode microstructure significantly affects kinetically and transport-limiting scenarios and thereby the cell performance. The secondary-phase morphology is also found to strongly influence the microstructure−transport-kinetics interactions. Apropos, strategies have been proposed for performance improvement via electrode microstructural modifications.