Growing up in the Seattle area, electrical engineering senior Brynne Hunt pursued her passion for space and rockets by interning at Blue Origin while still in high school. “Every engineer I talked to, their eyes lit up when I mentioned I was thinking about going to Purdue,” she remembers. “They are so well-respected in the industry, that it was an easy decision to choose Purdue for engineering.”

As a rocket nerd, she was also well aware of Purdue Space Program, Purdue’s chapter of SEDS (Students for the Exploration and Development of Space). “It’s the largest SEDS chapter in the country,” says Brynne. “They have different technical teams that build liquid rockets, hybrid rockets, solid rockets, and satellites. Before I even set foot on Purdue’s campus, I knew I wanted to join the Liquids team, because I saw they had completed a full-stack hotfire of Boomie Zoomie.”

In 2017, Purdue Space Program undertook the FAR-Mars challenge, co-sponsored by Friends of Amateur Rocketry (FAR) and the Mars Society. They challenged collegiate teams to build a bi-propellant liquid-fueled rocket to ascend between 30,000 and 45,000 feet, and offered a big cash bonus for using liquid methane as the fuel. “Solid rocket fuels are pretty simple and well-known, but very few people attempt liquid-fueled rockets,” said Christopher Nilsen, then the SEDS president, and now a research scientist advising the team. “With liquid-fueled rockets, there are valves, there are pressurizations, and everything has to be kept very cold. There’s a lot of plumbing to figure out.”


Even rarer are rockets using liquid methane as their fuel. Today, SpaceX and Blue Origin use methane in their most advanced engines; but in 2017, even the biggest names in aerospace had yet to attempt it. So for a group of undergraduate students to build a bi-propellant rocket, condensing their own liquid methane for fuel, was pretty audacious. Even the rocket’s name – Boomie Zoomie – showed a sense of humor in making the attempt. Although they conducted several successful hotfires, Purdue never launched Boomie Zoomie. And then, COVID put a stop to most amateur rocketry worldwide.

This is when Brynne and her fellow students took up the mantle, and began building Boomie Zoomie B.

“This is a huge undertaking,” says Brynne. “Liquid rocketry, especially at this scale, is very challenging. You have tanks and valves and fittings. You need a whole suite of ground control equipment just to fill the rocket with fuel. The vehicle itself needs a physical structure that’s light but strong, and also needs sensors, a recovery system, and a bunch of other things. There’s a lot to test, and there’s also a lot more that can go wrong.”

One fortunate aspect of the pandemic: it gave Purdue Space Program the gift of time. While the first Boomie Zoomie came together in about a year, Boomie Zoomie B has been almost 4 years in development. “Last semester our team ran 16 fully-integrated tests,” she says, “which means the vehicle was stacked, pressurized, and filled. We are not about ‘go fever’ here. We rehearse every little detail until we can do it in our sleep. We will not launch until we are ready.”

Brynne is the lead test operator: coordinating the team members, writing the procedures, following the checklists, and deciding how to address problems as they pop up. She’s also the main flight director, with the final say-so on whether they light the candle or not. This responsibility comes with its own unique stresses, according to Brynne: “We performed two fully-stacked hotfires, which took all weekend. I skipped an exam to make sure everything was ready. 24 hours are just not enough!”

Students couldn’t accomplish any of this without their secret weapon, Zucrow Labs. “Zucrow is the largest academic propulsion lab in the world,” says Brynne. “We can conduct tests here that would be impossible anywhere else.  They have been so supportive of our team and our mission, not only allowing us to test here, but offering their expertise to help us be successful. It’s pretty amazing what a bunch of undergrads can accomplish in an environment like this!”

The rocket had been tested, achieving a peak thrust of 975 lbf with an average tank pressure of 490 psi. The ground support equipment had performed perfectly. The team was fully prepared. The only thing left on the checklist? To send the darn thing.

In March 2022, thirty team members packed up Boomie Zoomie B and all its ground support equipment, driving out to the Mojave desert in California to conduct its first ever launch. “I told the team: this isn’t the time to second-guess,” says Brynne. “We’ve put in years of work. This is no different than the operations we mastered at Zucrow. It’s time to be proud of the job we’ve done, and do what we know how to do best.”

After a day of setup and testing, they chose early Saturday morning as their target launch date. They worked in shifts, with some students staying up all night to prepare, and others waking at 5 a.m. to commence launch operations. “I slept in the control room,” Brynne says. “You can’t beat the commute!”

They began the checklist, starting with sensors and data acquisition, and moving on to leak checks in the ground support equipment and the rocket. They had to factor in weather, and a communal launchpad shared by many other launch teams that weekend. Once Brynne was confident in their window, they began loading cryogenic propellant into the rocket. And then: 5, 4, 3, 2, 1, ignition.

“It was such a mix of emotions when it launched,” says Brynne. “I was so excited to see it, but at the same time, I was still trying to do my job, following the altitude callouts. It maxed out at 9,890 feet, which was less than a third of what it should have been. We were confused, trying to figure out what went wrong.”

Six students hopped in a truck and followed the rocket’s GPS beacon, locating Boomie Zoomie B and its parachute about two miles from the launchpad. Still feeling relief over a successful launch – and confusion over why it underperformed – the team now encountered an entirely unexpected emotion: surprise over how good the rocket still looked.

“It was fully intact,” remembers Brynne, “a perfect recovery. You just don’t see a vehicle in that good shape after a landing. We looked at each other and said, could we go again?”

Recovering and relaunching was not anywhere in the team’s contingency plans. They hadn’t even brought the proper tools to take the rocket apart. “I’m known for convincing my team to do crazy things,” laughs Brynne. “But this was the craziest thing of all. We just decided then and there we were going to do it.”

She continues: “And I insisted we carry the rocket back, because that bumpy drive off-road through the desert would have caused more damage than the landing. So we hoisted the thing on our backs, and hiked the two miles through the desert, over barbed-wire fences, all the way back to the launch site.” Did they sing songs to pass the time as they walked? “No, we’re engineers! We debated about the best configuration for shouldering the rocket, and which handgrip worked most efficiently! Definitely one of the favorite memories of my entire life.” 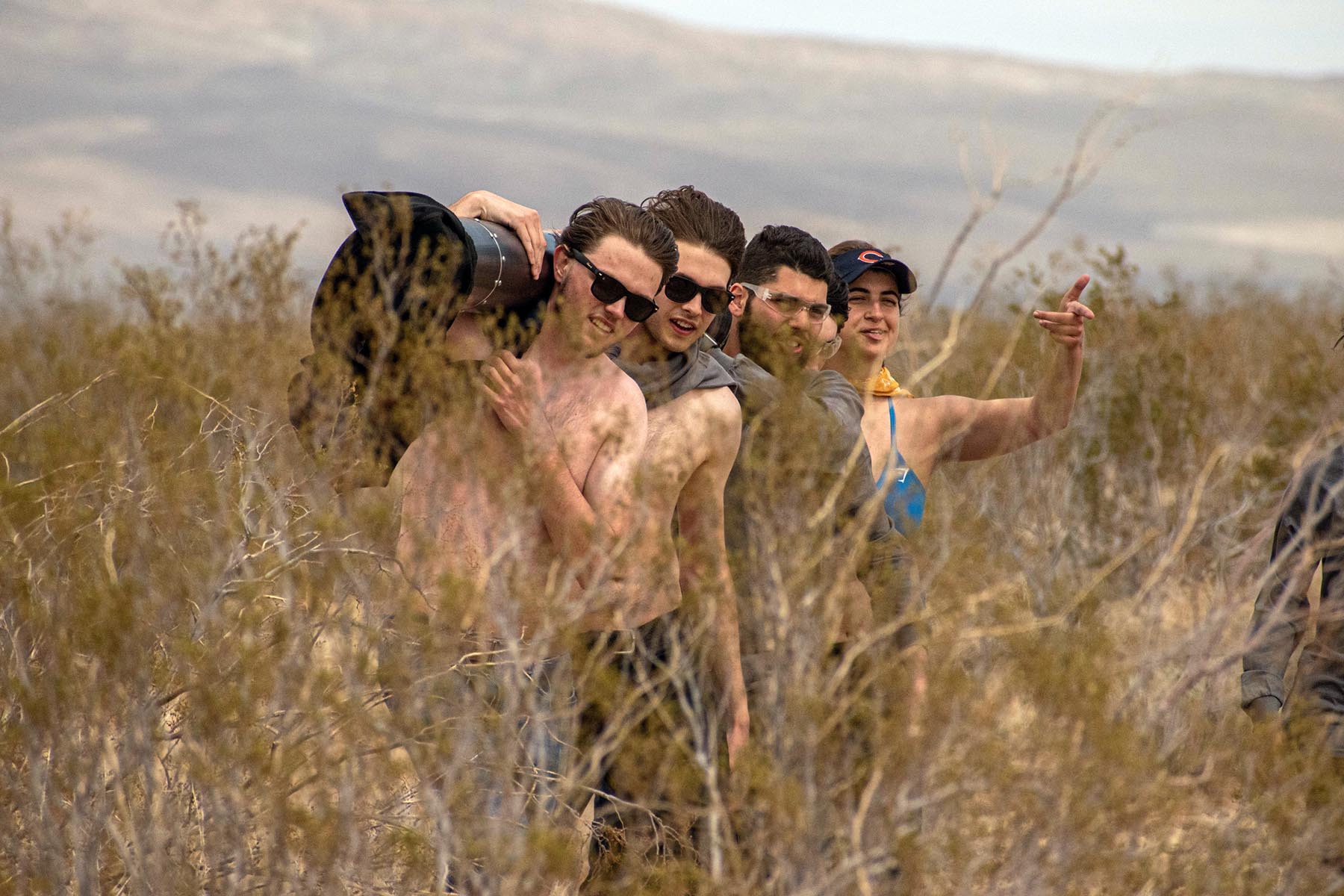 Rallying the team was the easy part. The hard part was figuring out what went wrong, and how to avoid it on a second launch. “All of our previous tests had taken place in Indiana in the winter, so we were used to loading propellant in a different environment,” says Brynne. “In the desert, there were temperature and sensor adjustments we didn’t account for, which led us to underfill our tanks. We also discovered a valve hadn’t fully opened, which reduced our overall chamber pressure by almost half.”

They divided up the necessary tasks, and pulled yet another all-nighter to address these issues for a possible second launch. And people took notice. “There aren’t many secrets among rocket teams,” says Brynne. “We all stalk each other to see what we’re doing, and word travels fast in the desert. I was getting a lot of messages from the other teams, and they were very supportive of us going again.”

After two hours’ sleep, the team were ready to go for launch attempt #2 on Sunday morning. Unfortunately, they encountered more valve problems, and Brynne had to call an abort. This forced them to confront yet another unexpected issue: they were running out of liquid oxygen.

“We had budgeted for just one launch,” says Brynne. “We’d already used that amount, and we also lost another load from that last abort. At this point, we’d worked so hard, and stayed up all night. Let’s just use whatever we have left. I don’t care what altitude we achieve; I just want to see it fly again.”

They re-racked, ran through their checklist again, and loaded whatever cryogenic propellants remained. After ensuring it was safe, Brynne counted down, and the rocket launched successfully. With tanks half-full, the rocket burned for just 5 seconds (rather than the planned 10 seconds), and only hit 6,655 feet max altitude. But for Brynne, this was a victory beyond what any of them had planned for.

“This was really an amazing accomplishment,” she says. “For a collegiate rocketry team to build a liquid-fueled rocket is a huge win. To launch it successfully is an even bigger win. To launch it twice in one weekend? That’s almost unprecedented. Sure, I have a competitive streak, and it would have been nice to hit our altitude numbers. But I am just in awe at the system our students have built. Our ground support equipment is so advanced. Our engine performance is unheard of. I’m so proud of our team, and so happy we were able to go on this journey together.” 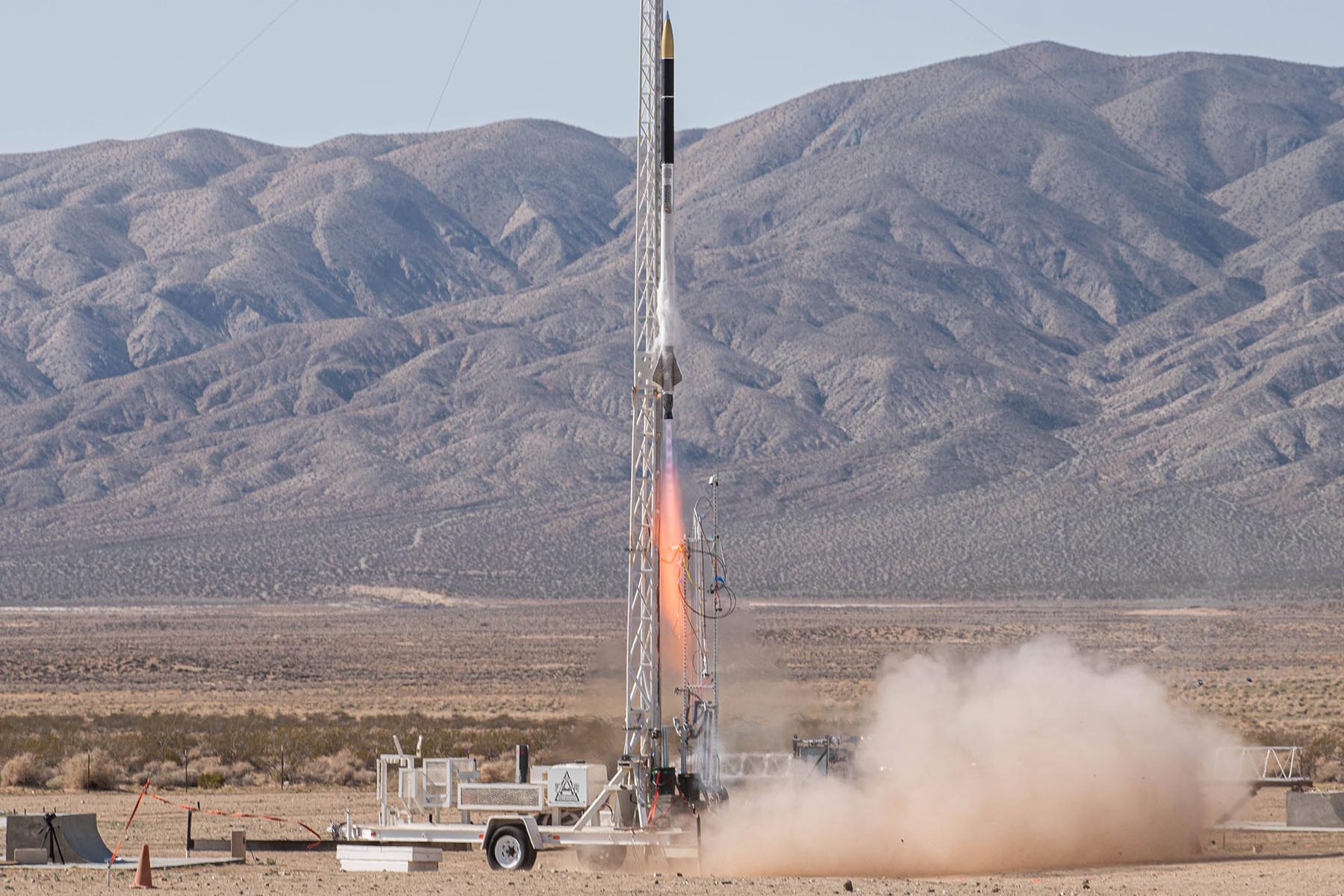 Most of Purdue Space Program’s Liquids team have graduated and headed off to work at SpaceX, Blue Origin, Relativity Space, and other industry powerhouses. But they’ll never forget doing something that only the “big boys” have ever pulled off. “Reusability is one of the main selling points in today’s space industry,” she says. “Being able to prove that we could do it, as a college team, is just unheard of. It’s the one thing we didn’t plan for, but it’s the one thing that we’ll all remember.”

And what of Boomie Zoomie B? Well, on the second launch, the parachutes didn’t function quite as well as the first launch, and the poor thing hit the ground with a 50G shock load after falling from 1,000 feet up.

“It’s so frustrating, because we got 97% of the way there,” Brynne laments. “We know how to get the remaining 3%. I kept telling everyone, we can do this! Let’s go again!”

Sure enough, the students remaining in the Liquids team salvaged the tanks from the crashed rocket, fabricating a new structure – addressing the issues they learned from their Mojave experience, and validating their years of design heritage. They re-launched the rocket on June 5, as part of FAR's Dollar Per Foot challenge. They also rebranded it with a new name: Boomie Zombie, a reflection of bringing the rocket back from the dead.

“The mission of Purdue Space Program is to go higher, go bigger, and do it better than anyone else,” says Brynne. “We’ve learned how to rapidly iterate and test propulsion systems, and every subteam has played a part, from structures and avionics, to engines and ground support. This experience has taken our team to new heights.”

Even more amazing, students don’t receive class credit for working on these rockets. It’s the experience and camaraderie of collaborating on such an ambitious project that keeps them coming back, late night after late night. “We have 18-year-olds coming straight in from high school who learn how to bend and flare their own tubes, or work on ground support equipment,” says Brynne. “There’s no other school in the world where you can learn vehicle engineering and be a part of a real launch team this quickly.” 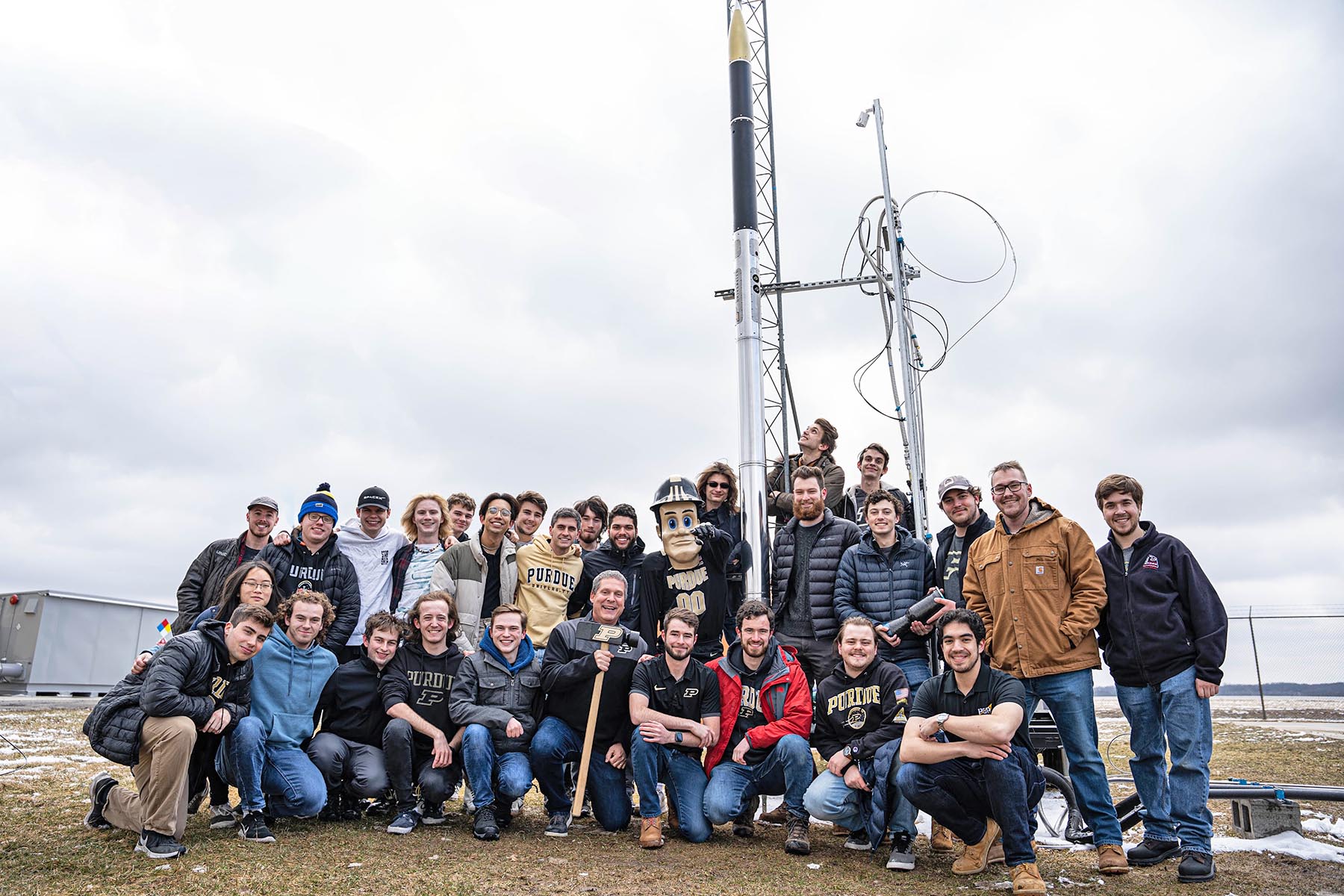