Lithium plating is one of the biggest issues that cause the degradation of lithium-ion batteries. Unfortunately, it is also one of the most difficult to diagnose. But Purdue researchers are on the case, and have developed an analytics toolbox that allows battery developers to diagnose the issues with the batteries as they are operating, without having to dissect them.

“They’re called lithium-ion batteries because their charge comes from transporting lithium ions between the two electrodes inside, the anode and the cathode,” said Sobana Rangarajan, a recent PhD graduate in mechanical engineering from the lab of Prof. Partha Mukherjee. “But if those lithium ions start to accumulate on the surface of the anode, they can form growing metallic deposits, which restrict the transport of further ions. We call this ‘deposition,’ as opposed to the normal flow, which is ‘intercalation.’”

“It can also become a safety issue,” she continued. “If these chunks of lithium break off, or keep growing toward the other electrode, they could cause a fire or other catastrophic failure. That’s why it’s so important to understand lithium plating, because it affects the two biggest metrics of batteries: safety and performance.”

This deposition, or “lithium plating,” often happens during attempts at fast charging, when lithium ions are being transported at higher rates. “We see this becoming a crucial bottleneck in electric vehicles,” said Mukherjee. “People want to charge their electric vehicles as fast as possible. But as the transport rate goes up, so does the chance that lithium plating occurs, which reduces the effectiveness of the battery.”

And there’s another problem. Because it happens at the microscopic level, the only way to observe lithium plating is to dissect the battery itself. And once you dissect it, that battery can no longer safely operate. So how can you monitor lithium plating in a battery that is actually operating in a real-world capacity?

To tackle this problem, Mukherjee and Rangarajan teamed up with Dr. Yevgen Barsukov, a battery expert working at Texas Instruments. “For twenty years, I have been working on live monitoring of battery capacity,” he said. “If you’ve ever seen a battery indicator on your laptop or phone, there’s a good chance that it’s Texas Instruments technology telling you how much charge is left.”

He also worked on integrating the charging process with the monitoring process, so batteries could be charged in an ideal fashion to maximize their usable lives (Texas Instruments has marketed this technology as MaxLife™). Mukherjee suggested that this same technology could be used to diagnose lithium plating in an active battery. Their research was first published in Journal of Materials Chemistry A in 2019.

“Dr. Barsukov had developed an algorithm which would allow faster charging with less lithium plating,” said Mukherjee. “But the only way to confirm this was by doing a post-mortem on the batteries afterwards. Our goal is to somehow integrate his algorithm with our experimental lab to create a system that could monitor lithium plating in real time.”

To do that, they had to invent their own metric for quantifying lithium plating. “There are three main observables we can measure while a battery is operating: voltage, time, and temperature,” said Rangarajan. “Through observation, we were able to translate these three measurements into three quantifiable parameters: plating period, plating power, and plating energy. These quantifiers apply at any operating condition, on any size battery.” They published their definitions of "plating energy" in Cell Reports Physical Science in 2022.

By plotting these three parameters on a graph, they were able to pinpoint a “Bermuda triangle” area, in which the conditions are just right for lithium plating to occur. “We are probably the only researchers right now using electrochemical measurements to directly quantify lithium plating,” said Rangarajan.

Previously, the only way to study lithium plating was to observe it with microscopy (yellow areas on left), which required dissecting the battery. Using electrochemical measurements, Mukherjee's team can make the same diagnostic measurements on an active battery, and pinpoint the exact conditions when lithium plating occurs (the blue triangle on the right).

So step one was understanding what lithium plating is. Step two was quantifying how time, temperature, and voltage contribute to lithium plating. Step three? Figuring out how to avoid the Bermuda triangle. “Unfortunately, the process is not simplistic; it’s non-linear and non-monotonic,” said Rangarajan. “There isn’t one particular trigger. And it gets even more complex, because a higher charge rate also can increase the temperature, so all these factors have to reach a synergy to avoid lithium plating.”

That’s why Barsukov’s battery management system is so important. “Chargers need to become smarter,” said Barsukov. “A straightforward charger providing a constant level of voltage is easy for everyone to understand. But if you incorporate these smart-charging algorithms, we’ve demonstrated that you can charge a battery twice as many times before they start to degrade. Not only that, but it allows charging at lower temperatures, and a higher degree of safety, because those lithium deposits are less likely to form and cause a catastrophic failure. And, because the batteries are lasting longer, we’re keeping them out of the waste stream, which is better for the environment.”

They are also uncovering issues never seen before. For example, in one experiment, their charging algorithm successfully kept the anode out of the danger zone, but the battery failed anyway. As it turns out, excessively high potential was occurring on the cathode, causing rapid degradation. “All of our attention has focused on the anode up this point,” said Barsukov, “after these findings, I’m telling everyone I know that we need to refine our algorithm to protect the cathode as well as the anode.” They published this research in Journals of Materials Chemistry A in 2021.

“This is an important problem to solve,” said Mukherjee. “The automotive industry is building electric cars by the thousands, and every time plating occurs, their losses scale up tremendously. We must extend the life of these cells, including in extreme cold or hot climates.”

While solutions may still be in short supply, Purdue has created at least one positive outcome: a suite of analytical tools that allow researchers to quantify the problem for the first time. “It’s taken six years just to understand the problem,” said Mukherjee. “But with the tools we’ve developed, researchers can now not only diagnose but measure lithium plating in batteries as they’re operating. And the tools are scalable and translatable. If the next breakthrough occurs in sodium-ion batteries or silicon composites or solid state, these tools offer potential solutions and insights that weren’t available before.” They described their 3-electrode analytics toolbox in ACS Omega in 2021.

“We meet every two weeks to discuss the latest results, so it has been a very close collaboration,” said Barsukov. “Prof. Mukherjee and his students are very diligent, and they are also very active and excited about advancing this work. The more awareness of lithium plating we can bring to the entire industry, the better off we’ll all be.” 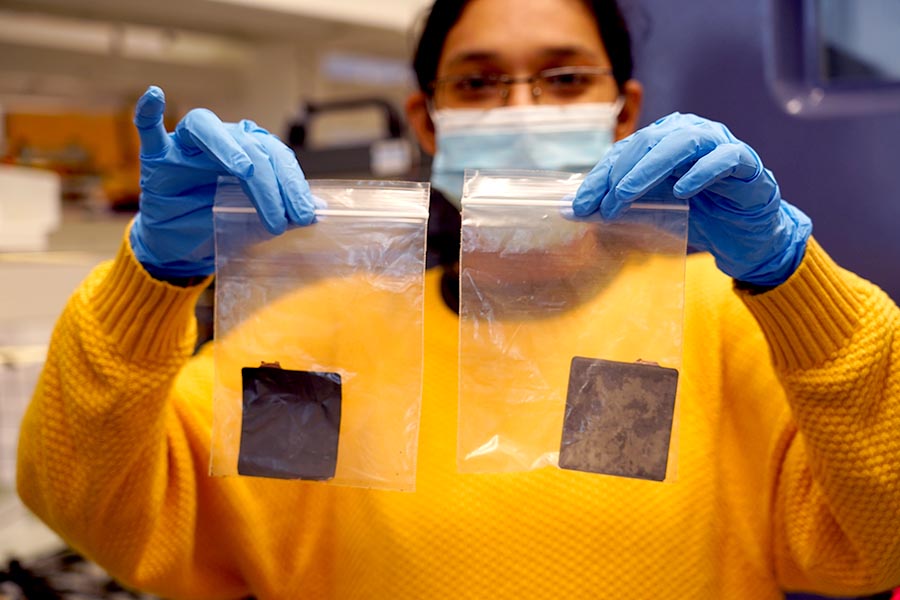 Lithium plating is a critical challenge for lithium intercalation battery chemistry, especially at high charge rates and high states of charge leading to reduced cycle life, capacity loss, and safety concerns. The anode-centric process of metallic lithium deposition can be identified by monitoring the anode potential in a full cell. In this study an in operando, three-electrode Li-ion pouch cell construct is proposed to probe and quantify lithium plating over a gamut of operational variability, combined with a comprehensive analysis including electrochemical, microscopy and spectroscopy signatures. Different regimes of capacity fade over cycling are identified with respect to the relative extent of lithium plating based on the plating energy as a descriptor. This study reveals the existence of a critical rate where the degradation due to lithium plating is minimal, which is a manifestation of the synergy between the kinetic processes and heat generation signatures. Different morphologies of lithium plating were observed, such as, localized agglomeration predominantly at rates exhibiting higher extent of plating, while diffuse characteristics at rates with lower amount of plating. The propensity for lithium plating and plating induced failure are found to increase with aging even at lower charge rates. This study comprehensively proffers the stochastic nature of the lithium plating process with operational variability.

The performance and safety of lithium-ion batteries are plagued by several diverse, nonlinear aging mechanisms influenced by the electrochemical thermal interactions at the electrodes, usage history, and operating conditions. Understanding and deconvoluting the fundamental reaction mechanisms responsible for electrode degradation are key for developing technologies in Li- ion battery diagnostics and prognostics. Hence, there exists a need for high-precision operando techniques to investigate and characterize distinct electrode degradation modes over a gamut of operational variability. Cells embedded with a stable, nonpolarizable reference electrode offer an in situ and operando tool to decouple the complex electrochemical interplay between the electrode pair by measuring individual electrode responses simultaneously with the cell response in the time and frequency domains. This perspective comprehensively looks at 3-electrode (3ε) analytics as a versatile toolbox, highlighting recent techniques and parameters developed with an emphasis on degradation diagnostics and control strategies that is expected to drive the futuristic design of battery management systems.

Fast charging of lithium-ion cells is key to alleviate range anxiety and improve the commercial viability of electric vehicles, which is, however, limited by the propensity of lithium plating. The plated lithium can grow dendritically and may cause internal short and increase the risk of thermal runaway. In this study, a novel anode potential control strategy using a battery management system (BMS) has been demonstrated to enable fast charging in commercial pouch cells without lithium plating. Operando anode potential measurement using a 3-electrode configuration allows monitoring the occurrence of lithium plating. A novel 3-electrode cell analytics was developed to delineate the irreversible and irretrievable contributions to the total capacity loss and identify electrode-specific degradation mechanisms. The BMS algorithm dictates the charging current to maintain a positive anode potential and prevents lithium plating on the anode but fails to sufficiently control the cathode operating potential leading to irretrievable capacity loss. Operating the cell in conditions favorable to the anode may contrarily lead to cathode degradation and subsequent cell failure. Morphological and electrochemical characterizations reveal minimal anode degradation and a 2x higher cathode-capacity loss in the BMS-controlled cells. The baseline cell, not enabled with the BMS anode potential control strategy, exhibits extensive lithium deposition in the anode resulting in 7x higher anode-capacity loss. This study discovers the role of cathode-induced cell failure even when the anode-centric lithium plating is prevented and suggests pathways toward future BMS algorithm development enabling Li-ion cell operation under extremes.