Can we turn Martian soil into rocket propellant?

We've sent many probes, landers, and rovers to Mars, but we've never been able to send anything back from the Red Planet. That may change, thanks to some Purdue researchers who have successfully demonstrated a solid rocket propellant using the same perchlorates found in Martian soil.

“Here at Purdue we study energetic materials, which includes explosives, propellants, and pyrotechnics,” said Alex Hoganson, a master’s student in mechanical engineering under professor Steve Son. “Most of my work has focused on additive manufacturing of energetics. But this particular project is very different.”

As part of Prof. Son’s class, students had to conduct a literature review into some aspect of energetic materials. Hoganson focused on the findings of NASA’s 2008 Phoenix Mars Lander, which discovered that Martian soil had a significant amount of molecules called perchlorates. While most scientists focused on using this data to forecast the potential for water or agriculture on Mars, Hoganson and his fellow students chose to pursue exploratory research in a different direction.

“When I hear ‘perchlorates,’ my rocket scientist mind immediately goes to solid propellants,” said Hoganson. “Ammonium perchlorate was used as the oxidizer on the Space Shuttle’s solid rocket boosters. If there are perchlorates on Mars, my first question is: can I light them on fire?” 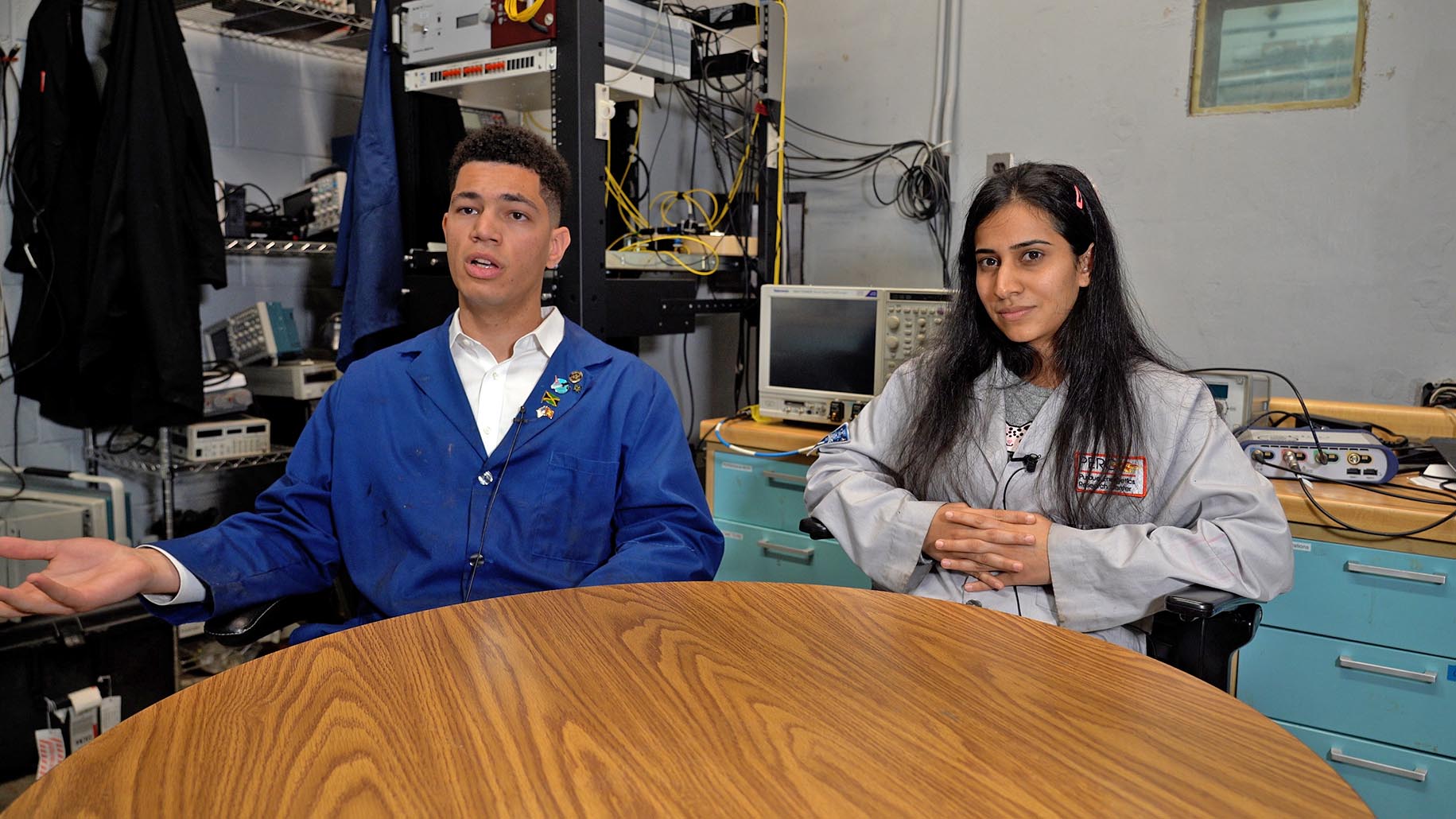 Alex Hoganson, Hetal Rathore, and Chase Wernex (not pictured) worked on a project at Zucrow Labs to make solid rocket propellant out of analog Martian soil.

No one had yet studied the feasibility of using Martian perchlorates as solid rocket propellant. So Hoganson and his colleagues got to work. They first conducted a literature review and computer simulation using NASA’s data, and determined that the chemical composition of Martian soil at the Phoenix Lander site was 60% calcium perchlorate and 40% magnesium perchlorate. “We can actually go online and buy those perchlorates,” said Hoganson, “and make our own analog of a Martian solid propellant.”

Zucrow Labs is one of the few academic labs in the world that specializes in energetic materials. So the Purdue team had all the equipment they needed to synthesize these chemicals into solid rocket propellant, and then test them in a combustion chamber.

“We created three samples of pure perchlorates as a control, and then the 60/40 blend which we called the ‘Mars propellant,’” said Hetal Rathore, an aeronautics and astronautics student who worked on the project. “We used a device called a Crawford bomb to seal in the samples and precisely control the pressure inside. Then with a high-speed camera, we could measure the burn rate.”

The initial results were encouraging. “The propellants behaved like propellants,” said Hoganson. “The Mars blend wasn’t as efficient an oxidizer as the ammonium perchlorate used on the Space Shuttle, but it was still pretty good.”

They made two additional discoveries. First, the 60/40 Mars blend was extremely hygroscopic, meaning it eagerly absorbed water from the air. That’s a problem for earthbound propellants, but in the arid environment of Mars, it may not be as significant a hurdle.

The second unexpected discovery was the color of the burn. “Aluminum and magnesium burned with a bright white flame, which is exactly what we expect,” said Hoganson. “Calcium burned with a red flame, which is also expected. But the 60/40 Mars blend, in addition to the red and white, also showed a blue flame at the top, and we’re still not 100% certain why.”

The resulting red, white, and blue burn also had a unique beauty. In fact, the team’s photographs won a Combustion Art award at recent meeting of the Combustion Institute. They will also be presenting their findings at the 45th International Pyrotechnics Society Seminar in July.

This composite photo shows the multicolored red, white, and blue flames of a solid propellant with a 60/40 mix of calcium and magnesium perchlorates, the ratio found in Martian soil by NASA's 2008 Phoenix Mars Lander. This image won a Combustion Art contest for Alex Hoganson, Chase Wernex, Hetal Rathore, and Steve Son at a recent meeting of the Combustion Institute.

So why is this significant? It all has to do with in situ resource utilization (ISRU). “The amount of cargo you can take to Mars is completely dependent on the mass of the rocket, including propellant,” said Rathore. “But if you could manufacture propellant in situ on the surface of Mars, you could send a payload back without having to carry extra propellant all the way from Earth.”

There are many logistical hurdles to clear, including how to extract the perchlorates from the Martian soil. NASA’s Perseverance rover is currently collecting soil samples on Mars, but the technology to return those samples to Earth is still being developed. Hoganson sees their work as part of that bigger plan. “I can foresee a future where we have colonies and mining operations on Mars,” he said. “Robots and industrial machines can scrape the soil and harvest these perchlorates en masse, creating their own rocket propellant to get back to Earth. Having that much oxidizer readily available in the Martian soil is a resource we should definitely take advantage of.”

Hoganson has since graduated, taking his love of rockets to Blue Origin as a full-time propulsion engineer. But he looks forward to seeing this final project play a role in future space exploration. “Space is the final frontier, and right now the only way to get there is with energetic materials,” he said. “This project took a kernel of data from another planet, and established that it is possible to turn these Martian perchlorates into solid propellants, which no one has ever done. Being able to do something for the first time is a really cool feeling.”