Atmospheric water harvesting: can we get water out of thin air?

Earth’s atmosphere holds six times more fresh water than all of its rivers combined. So is it possible to harvest that water, in areas where people have no other fresh water source? Purdue University researchers have crunched the numbers, and have the data to show which atmospheric water harvesting methods work best in different regions of the world. 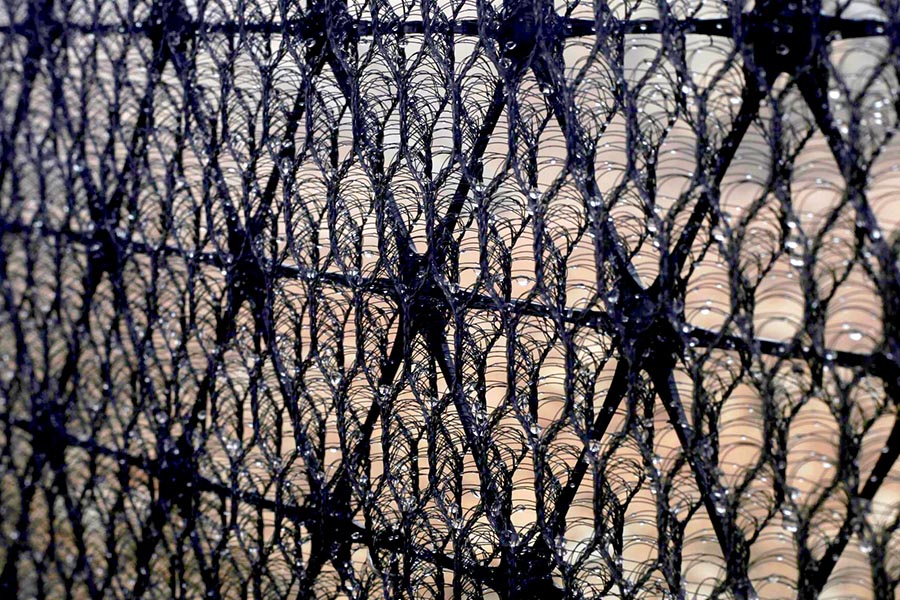 Fog nets, which passively collect water from the humidity in the air, only work if the air is 100% saturated. Newer technologies are making other methods of atmospheric water harvesting more viable in more places around the world. (Photo courtesy Thomson Reuters Foundation/Khalid Fakhar)

“Water in the atmosphere is widely available, and requires a lot less filtering than that of groundwater,” said David Warsinger, assistant professor of mechanical engineering. “Some areas of the world don’t have a viable source of groundwater, and they’re not near enough to the sea to make desalination practical. For them, atmospheric water harvesting may make the most sense. But this is still very much an emerging technology.”

There are four main methods for extracting water from the atmosphere:

But there’s a problem. Each of these technologies is in different stages of development, so it’s difficult to compare the effectiveness of each method, especially in varying conditions. “These solutions all use different benchmarks,” said Andrew Fix, a Ph.D. student researching how to use membranes to de-humidify outdoor air for HVAC systems. “They may say a certain technology extracts 20 gallons of water a day, but under what temperature and humidity conditions? How big was the system? How would a different technology compare in the same conditions? There hasn’t been a fair method of comparison until now. How do you pick the correct technology for the correct environment?”

Their solution was to create a system of benchmarks, based on ideal energy use and environmental conditions. This research has now been published in Energy & Environmental Science.

“We started with the laws of thermodynamics to define the minimum theoretical energy requirement required to extract water from air,” said Akshay Rao, the paper’s lead author and now a Ph.D. student at Stanford. “From there, we built individual models of energy input and output under different conditions, to compare the different technologies.”

The team generated two charts (above) that delineate which methods work best under which environmental conditions. For example, the chart on the left shows that fog nets (which require zero energy) are the best option when the air is 100% saturated with water. However, fog won’t form when the relative humidity drops below 100%, at which point other methods become more energy-efficient.

Perhaps more importantly, the chart on the right shows the ideal operation, if technologies were perfected. “For example, we are currently working on vapor-selective membranes, but the vacuum pump efficiencies are terrible right now,” said Warsinger. “If those improve, then membranes become the clear choice under a much broader range of conditions. This highlights the importance of improving our compressors and other equipment designs.”

David Warsinger created this map with LEGO® bricks, showing which areas of the world require more energy to extract fresh water from the atmosphere. While the yellows and oranges of arid deserts may make these technologies seem less than ideal, Warsinger sees great opportunities in the bluer regions (Amazon basin, Congo, Southeast Asia), where water quantity is not an issue, but water quality is. (Purdue University photo/Jared Pike)

Their next step was to use supercomputers to crunch huge amounts of global climate data. From this, they generated a map of which atmospheric water harvesting methods are the most energy efficient in certain areas of the world.

“What we found is that it’s not just temperature and humidity; seasonality also plays a huge role,” said Warsinger. “Some areas are very consistent, while others have extreme wet and dry seasons. In those cases, certain technologies may only work for a few months, but they’ll work really well.”

So what could this look like in the real world? Warsinger’s team is working with a school in west Africa to find out. They recently received a grant from the Shah Family Global Innovation Lab to bring these methods to Kédougou, Senegal, where seasonal rains (and lack of clean groundwater) make atmospheric water harvesting a viable option.

“In that culture, water is mostly gathered by school-age girls,” said Warsinger. “Sometimes they have to travel great distances to find a viable well, which means they can’t attend school. If we can make atmospheric water harvesting work in those conditions, then girls won’t have to endanger themselves by traveling outside the town. They can stay in school, and have cleaner sources of water also.”

He continues: “Looking at the map, it’s interesting that the areas where atmospheric water harvesting is most efficient are also places where water quality is a constant worry. Places like the Amazon, the Congo, India/Bangladesh, and Southeast Asia have great potential to reduce diseases caused by contaminated groundwater. Atmospheric water harvesting is not just about scarcity; it’s about water quality as well.”

Climate change will also affect the map, in both good and bad ways. For example, there are large sections in the northern hemisphere where atmospheric water harvesting is not feasible, due to the low temperatures. That may change as the earth heats up. “As the atmosphere warms, it becomes capable of holding more humidity,” said Fix. “This presents an opportunity, because if you pick the right technology, atmospheric water harvesting becomes a more feasible alternative to bring freshwater to more areas of the world.”

“Providing clean water to people everywhere is a huge challenge,” said Warsinger. “Thanks to all this number-crunching, we now have hard data which shows where certain methods are feasible, and where they need improvement. We’re excited to provide a literal map for the future development of atmospheric water harvesting technologies.”

ABSTRACT: Atmospheric water harvesting (AWH) is a rapidly emerging approach for decentralized water production, but current technology is limited by trade-offs between energy consumption and yield. The field lacks a common basis to compare different AWH technologies and a robust understanding of the performance impacts of water recovery, desorption humidity (for sorbent systems), and realistic component-level efficiencies. By devising a set of unifying assumptions and consistent parameters across technologies, we provide the first fair thermodynamic comparison over a broad range of environmental conditions. Using 2nd law analysis, or least work, we study the maximum efficiency for common open system AWH methods – fog nets, dew plates, membrane-systems, and sorption processes – to identify the process performance limits. We find that the thermodynamic minimum for any AWH process is anywhere from 0x (relative humidity (RH) ≥ 100%) to upwards of 250x (RH < 10%) the minimum energy requirement of seawater desalination. Sorbents have a particular niche in colder (T < 310 K), arid regions (<6 g kg-1). Membrane-systems are best at low relative humidity and the region of applicability is strongly affected by vacuum pumping efficiency. Dew harvesting is best at higher humidity (RH > 40%) and fog harvesting is optimal when super-saturated conditions exist. Increasing efficiency at the component-level, particularly for vacuum pumps and condensers, may be the most promising avenue for improvement. Enabled by peta-scale computing, our findings use geographical and parametric mapping to provide a framework for technology deployment and energy-optimization.