Air conditioners that talk to each other could prevent rolling blackouts

When we turn on the air conditioner, we seldom think about the hundreds of other air conditioners in our neighborhood that may also be turning on simultaneously. At these peak demand times, local power grids are susceptible to brownouts and other issues. But Purdue University researchers have proposed a simple solution: air conditioners that talk to each other. By distributing the times at which electrical loads turn on – even by a few seconds – power grids can be much more robust against these issues, with no discernible impact to the end user. 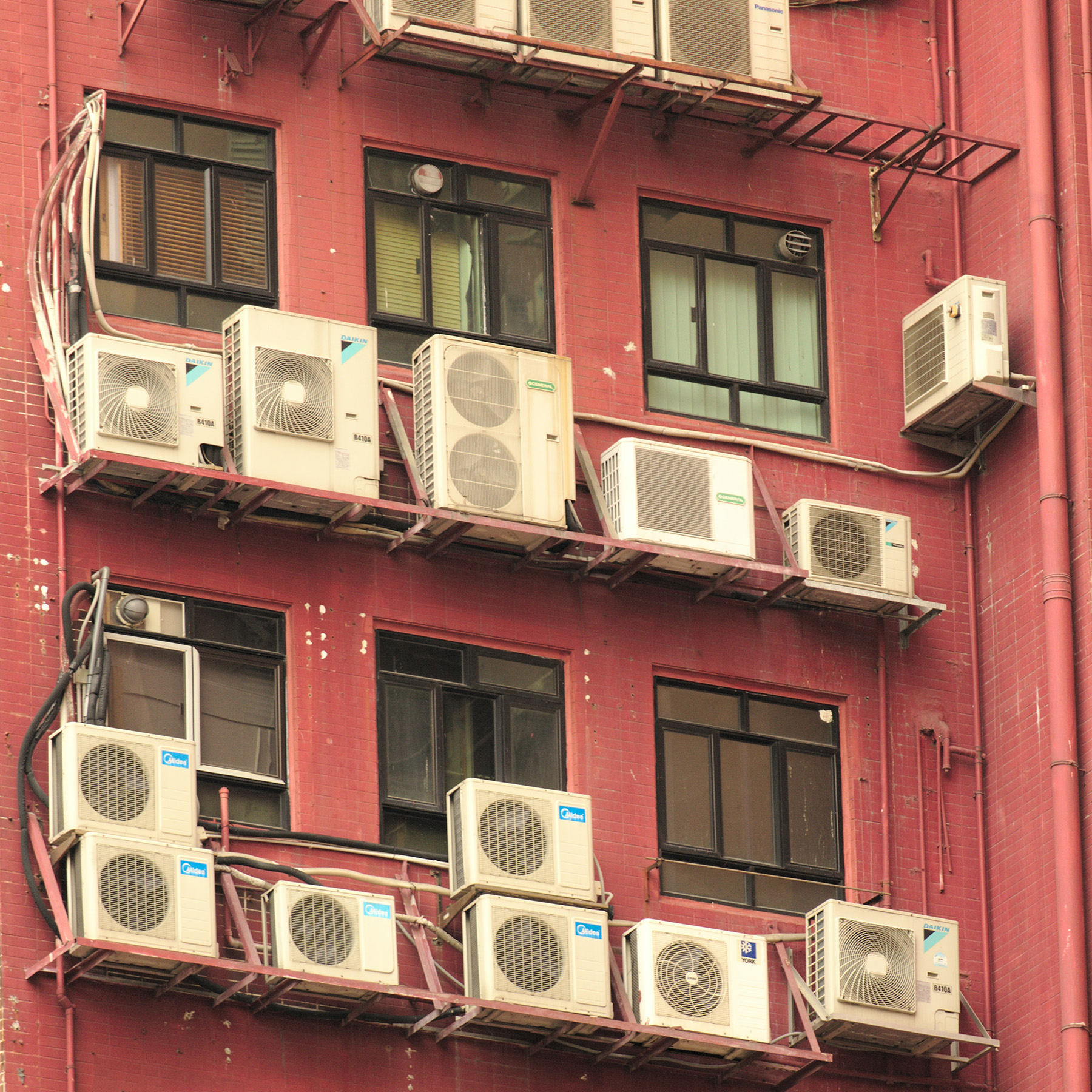 Air conditioners turning on and off have a huge effect on spikes in electrical demand. If they coordinated with each other, those spikes could be reduced or even eliminated, making the electrical grid more robust. (Photo courtesy Unsplash/Chromatograph)

“Energy use follows a predictable pattern,” said Kevin Kircher, assistant professor of mechanical engineering, who studies the interaction between buildings and the electrical grid. “When the outside temperature rises, air conditioners come on in the middle of the day to cool buildings down. That peak demand is easy to predict on a macro scale. But on a micro scale, that curve goes through tremendous peaks when these electrical loads are turned on.”

This can lead to a domino effect, because electrical infrastructure is built to withstand the worst-case scenario. “If a million people turn on their air conditioner at the same time, power lines may overload,” said Kircher. “That forces utilities to upsize their infrastructure, to match that maximum load when everything turns on at once. So they’re ripping out existing stuff and replacing it, which costs a lot of money, which in turn makes electricity more expensive for everyone.”

Kircher has proposed a simple preventative measure: major appliances that coordinate with each other. By turning on in a distributed fashion (rather than all at once), peak demands on the electrical grid can be dramatically decreased. His research has been published in IEEE Transactions on Power Delivery.

“This already happens to a certain extent with thermostats,” said Kircher. “Most people don’t physically turn their air conditioner on and off; a thermostat controls it, based on the temperature. We just need to take it one step further, and have these thermostats talk to each other, so that these major electrical loads come online in a more distributed fashion.”

Kircher created a computer simulation, based on a heat wave that affected Sacramento, California in August 2020, causing rolling blackouts throughout the state. In the hottest part of the day at 3:00 pm, the aggregate power load was about 170 kilowatts. However, due to the peaks of air conditioners being turned on simultaneously, the actual load spiked at 236 kilowatts.

“This is the worst-case scenario we are trying to avoid,” he said. “In our simulation, we applied our theories about distributed loads, which dramatically shaved those peaks down. The actual load never exceeded 170 kilowatts. This would have prevented rolling blackouts and other issues, with very little discernible impact to the end user.”

So how exactly do air conditioners talk to each other? Kircher’s paper didn’t lay out a specific method, but it did calculate the ridiculously small data requirement. “This system can be implemented with a bit rate of less than 1 bit per second,” he said. “Appliances basically just need to put a flag up and say, ‘I’m here.’ So they don’t need high-speed wi-fi, or other methods which have security and reliability issues. They could use unconventional methods, such as utilizing power lines themselves as a network to communicate.”

He also discovered the best scale to implement this coordination: about 50-100 households, or roughly a single apartment building. “The math tells us that the more devices are involved, the more smoothing takes place at a macro level,” said Kircher. “But the real big spikes happen at the building level. If we can shave those peaks, then the positive effects trickle up through the whole neighborhood, and eventually through the whole city.”

While there are many proposals to aid the country’s electrical grid, Kircher is excited that something so small could have such a big effect. “An ounce of prevention is worth a pound of cure,” he said. “If these electrical loads just coordinated a little bit on the micro level, the end effect on the macro level would be huge. The overall comfort of the building remains the same for end users, and the electrical grid becomes much less susceptible to problems. It’s a win-win.”

Distributed Peak Shaving for Small Aggregations of Cyclic Loads
Kevin J. Kircher, Adedayo O. Aderibole, Leslie K. Norford, and Steven B. Leeb
https://doi.org/10.1109/TPWRD.2022.3149446
Analogous to the way a good driver is aware of neighboring cars, electrical loads can coordinate with other loads within a building or section of a distribution grid. This paper develops methods that enable groups of cyclic loads (devices that turn on and off periodically to maintain setpoints) to reduce their peak aggregate power demand. The methods accommodate a wide variety of cyclic loads, including those with nonlinear or unknown dynamics, and can be implemented in a fully distributed fashion. This paper targets settings with a few hundred cyclic loads or fewer, where the methods developed here could reduce demand peaks significantly while maintaining or improving quality of service. This could save ratepayers money on monthly demand charges, decrease fuel use in microgrids, or extend the life of power delivery equipment.