Phonon scattering is a phenomenon that describes how heat is conducted through materials. Until recently, most heat transfer researchers have only studied three-phonon scattering. But Prof. Xiulin Ruan and his team have demonstrated for the first time, through both theory and experimentation, the importance of four-phonon scattering in infrared and Raman spectra.

Ever wonder how the handheld forehead thermometer works, such as in detecting fevers during the COVID-19 pandemic? It measures the infrared radiation from the body. Besides the human body, infrared radiation is also widely used to measure the temperatures of materials or characterize their properties. In fact, infrared thermal radiation is one of the three primary modes of heat transfer and has wide applications in smart sensing, renewable energy, and nanotechnology.  Likewise, Raman spectra are one of the most commonly used methods to characterize materials.

Infrared and Raman spectra of semiconductors and dielectric materials have a quantum mechanics origin. For long, the frequencies of their spectral lines have been associated with the vibrational frequencies of phonons, quanta of lattice vibrations, while the linewidths are associated with the rate of three-phonon scattering, a process where three phonons interact. However, the linewidths from theory were often considerably lower than the experimental data, and the discrepancy was typically attributed to defects or impurities in experimental materials. Moreover, infrared radiation at high temperature is important, but very hard to directly measure. Hence, a better understanding of infrared and Raman spectra and the prediction methods are needed.

Professor Xiulin Ruan from the School of Mechanical Engineering at Purdue University, Professor Yongjie Hu from the University of California at Los Angeles, and Professor Ju Li from the Massachusetts Institute of Technology have published a paper entitled “Observation of strong higher-order lattice anharmonicity in Raman and infrared spectra” in Physical Review B.  Dr. Xiaolong Yang and Dr. Tianli Feng, both former members of Ruan’s group, co-led the paper. By using rigorous density-functional calculations and Raman experiments, the authors show that a new mechanism, four-phonon scattering, strongly affects the infrared and Raman spectra for a wide range of materials. Because of the importance of this work, it was published as a Rapid Communication and selected as Editor’s Suggestion. 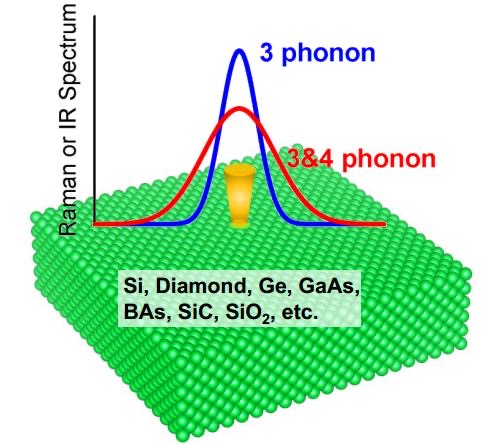 Schematic diagram of the effect of four-phonon scattering on IR and Raman spectra. Image credit: Xiaolong Yang and Xiulin Ruan.

With the series of studies on four-phonon scattering by Ruan’s team and other groups, now we know that four-phonon scattering can widely affect two of the three heat transfer modes: heat conduction and thermal radiation. The four-phonon theory has advanced the quantum theory of thermal conductivity, thermal radiation, Raman spectra, and other phenomena. In addition to its scientific significance, it helps to interpret infrared and Raman spectra of materials, and provides the theory and predictive tools to guide the discovery of new materials for heat conduction and thermal radiation applications.

The fundamental theory of Raman and infrared (IR) linewidth has been well established as the third-order lattice anharmonicity (three-phonon scattering). In this work, we use both rigorous density functional calculations and Raman experiments to find, surprisingly, that the fourth-order anharmonicity universally plays a significant or even dominant role over the third-order anharmonicity at room temperature, and more so at elevated temperatures, for a wide range of materials including diamond, Si, Ge, GaAs, boron arsenide (BAs), cubic silicon carbide (3C-SiC), and α-quartz. This is enabled by the large four-phonon scattering phase space of zone-center optical phonons. Raman measurements on BAs were conducted, and their linewidth verifies our predictions. The predicted infrared optical properties through the Lorentz oscillator model, after including four-phonon scattering, show much better agreement with experimental measurements than those three-phonon-based predictions. Our work advances the fundamental understanding of Raman and IR response and will broadly impact spectroscopy techniques and radiative transport.