Some people take the unconventional route to a Purdue degree. For mechanical engineering student David Lewis, this includes playing with Purdue Bands and Orchestras. And a five semester co-op with GE. And a private pilot's license. And a Study Abroad in Colombia. And an internship in Mexico.

“I thought, there’s no way they’re going to let me do all this,” says David.  “But Purdue, and especially Mechanical Engineering, enables you to do so much.”

David’s story begins in O’Fallon, Illinois, outside of St. Louis.  He showed a passion for music, playing the French horn in his school band, but soon added another passion: aviation.  “As a kid, I loved all things flying,” he remembers.  “I joined the EAA [Experimental Aircraft Association], and took pilot studies, working for my instructor by cleaning his airplane in exchange for flight time.  You really have to love flying, to sit on your back on the hot tarmac and clean the grease off the underside of someone else’s plane!”

Purdue was on his list for prestigious engineering schools, and what made Purdue stand apart was its co-op program, where students alternate semesters in the classroom and in industry.  “In engineering, having that real-world experience before you graduate is something that all employers are looking for,” says David.  He was also intrigued by Purdue’s GEARE program [Global Engineering Alliance for Research and Education], which combines domestic work experiences with international work experiences: “I’ve always been interested in travel and experiencing other cultures, so I knew Purdue was going to be the right place for me.”

And the final kicker, of course, was the music.  “Purdue has an amazing atmosphere for music,” says David.  “With Purdue Bands and Orchestras, and Purdue Musical Organizations, I knew there would be a musical home for me, as well as an academic home.  There are no music majors here, so everybody that participates is doing it just because they love music.”

Early in his time at Purdue, David made a bold decision, changing from Aeronautical Engineering to Mechanical.  “I still love all things aviation,” he says, “but Mechanical Engineering has a lot more pathways, and a lot more flexibility in what I can do.  Plus, because I wanted to have these international experiences, I knew there would be a much greater breadth of companies in Mechanical that could accommodate me.”

David was attempting something no one had ever tried: working internationally with the GEARE program, while also doing a 5-session co-op.  “To say it is ambitious is an understatement!” laughs David.  “The GEARE program worked closely with the ME co-op program to make sure it was possible, and then coordinate my schedule over the next 5 years.  Then the only thing left was to apply to industry.”

He found a willing corporate partner in GE Aviation.  “I knew a 5-session co-op was a big commitment,” says David.  “You’re basically agreeing to work for this company for 5 semesters.  But I had no reservations, because GE is such a great company, and I was looking forward to having in a role in something that is so vital to the aviation industry.”

So in between semesters of classes at Purdue, David worked as an engineer at GE Aviation in Arkansas City, Kansas; and even used his time there to attain his private pilot's license.  “It was a completely different world,” says David.  “Here at Purdue, it’s very theoretical.  You focus on the mathematics and the science behind what goes on.  But the plant in Ark City was an assembly/test/maintenance/overhaul/repair facility, which was intimidating, but also exciting.  Thankfully, I felt very prepared with my Purdue background; and it didn’t hurt that my boss was also a Purdue grad!  That Purdue name gets you connections you never thought you’d make.”

In Purdue Mechanical Engineering, 40% of undergraduate students study internationally (the national average is only 5%).  David wanted to be part of this international movement, and so he started small, taking a 2-week Study Abroad trip to Colombia.  “I loved it so much, I decided I want to spend a semester there,” recalls David.  “When I told my parents, they were hesitant because they remember the 1980s, when Medellin was the most dangerous city in the world.  But I had done my research and talked to students who had been there, and they all said that Colombia’s a totally different place now.  It’s actually much safer than my hometown of St. Louis!”

After his semester abroad, he still wasn’t done.  “I asked the GEARE office if I could work somewhere that involves aviation,” says David.  “They found a professor working at a university in Querétaro, Mexico.  So it was another big paradigm shift -- I went from working in a manufacturing facility to doing research at a university.  Doing that work in a different cultural environment and gaining that new perspective really helped me grow personally, and as an engineer.” 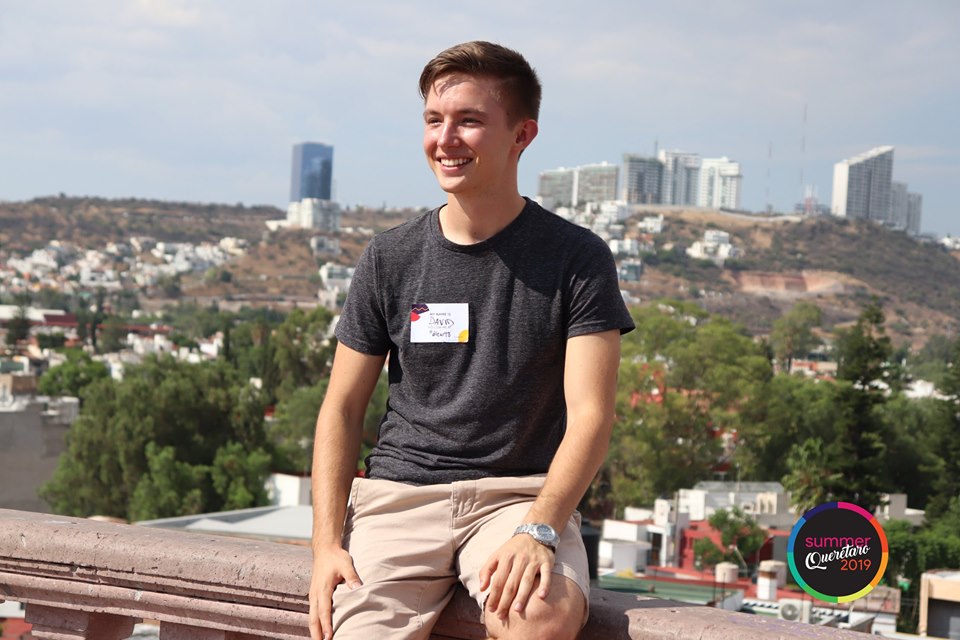 Strike Up The Band

“Being a lifelong band student, and loving mathematics and STEM, it was a no-brainer that I wanted to do both music and engineering,” says David.  He plays in the Purdue Bell Choir (part of Purdue Musical Organizations); and in the “All-American” Marching Band, he leads the mellophone section.  The 389 members of the band drill for two weeks before school starts; they practice for two hours every weekday during the fall; and on football gamedays, they are in uniform and performing from 7:30 in the morning until late in the afternoon.

While some may see this huge time commitment as a detriment to studying engineering, David sees it as a positive.  “A lot of the band is in engineering, and a lot of my section [mellophones] are also engineers,” says David.  “Whenever a test is coming up, or I have a difficult homework assignment, there is always someone in my section that can help me solve those problems.”  The mellophone section also meet regularly outside of band practice to study and help each other out with their academic assignments.  “Having these close friends as a safety net really helps me feel more secure.”

In addition, playing music provides a much-needed release valve in the pressure cooker of engineering studies.  “This industry is so strict, and has so many guidelines,” says David.  “Having a creative outlet soothes the non-engineering part of my brain.  Those two hours a day are my time to relax and have fun, hang out with my friends, and also engage a totally different part of my brain.”

You Can Have It All

David Lewis has definitely gotten the most out of his Purdue experience, even if it did take 5 years to get there.  He encourages others to do the same.  “The most important thing I learned after setting foot on Purdue’s campus: set yourself on the path you want to go,” says David.  “Purdue ME teaches you to be the best well-rounded person you can be, and gives you the opportunities to do just that.  If that means doing more things than you thought, or taking an unconventional route... do it!  Don’t sit idly behind a computer or a video game.  There are so many organizations here, and putting yourself out there builds that safety net of friends that helps you survive and thrive.  Having that Purdue network will last you a lifetime.”