This semester's projects included a system to sanitize makeup brushes; an automated printer that plants seeds in biodegradable paper; and an autonomous underwater robot that carries extra oxygen tanks for scuba divers.

The Malott Innovation Awards are the culmination of ME463, Purdue's capstone class for seniors in Mechanical Engineering.  Teams of students work closely with faculty members and industry partners to create prototype products, continually refining and improving them using the knowledge from their engineering courses over the last four years. At the end of the semester, the students present their final prototypes to a panel of Purdue ME alumni who work in various industries; this panel selects the award winning teams.  Many teams also collaborated with industry, working on sponsored projects from companies like Boeing, Rolls-Royce, and iRobot.

The top teams from the Fall 2019 Malott Innovation Awards are: 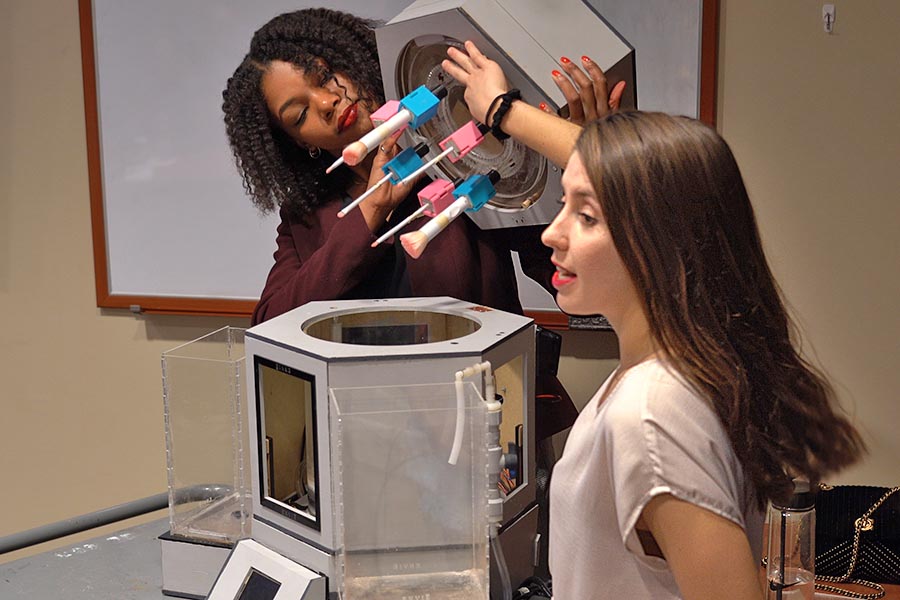 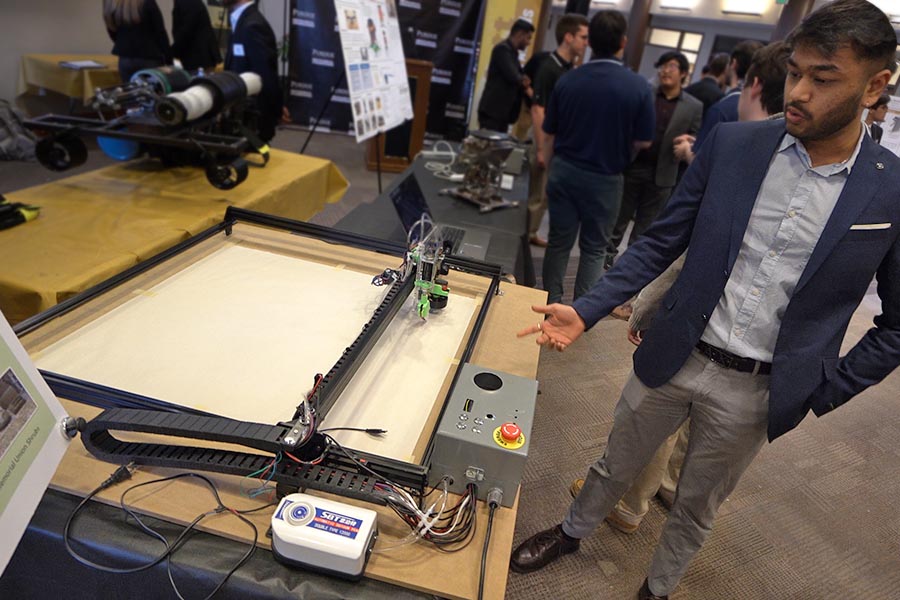 2nd Place: EcoJet, Karan Kedia, Jaimit Aggarwal, Arya Lele, Claire Nelson, Jialei Wang, Luke Stevenson. EcoJet identified the problem as follows: To design and develop an automated printer that implants seeds in a user-defined geometrical pattern on biodegradable paper for the purpose of analyzing ecological interactions among different species of flora.  Ecojet’s design utilizes Python software to parse an input pattern file to be further processed by Arduino software. An X-Y gantry is controlled by Arduino to move to desired coordinates of seed location. In addition, a pneumatic suction pen is used to pick and drop seeds one at a time, and a two-sided tape is used to glue the seeds to the biodegradable paper. 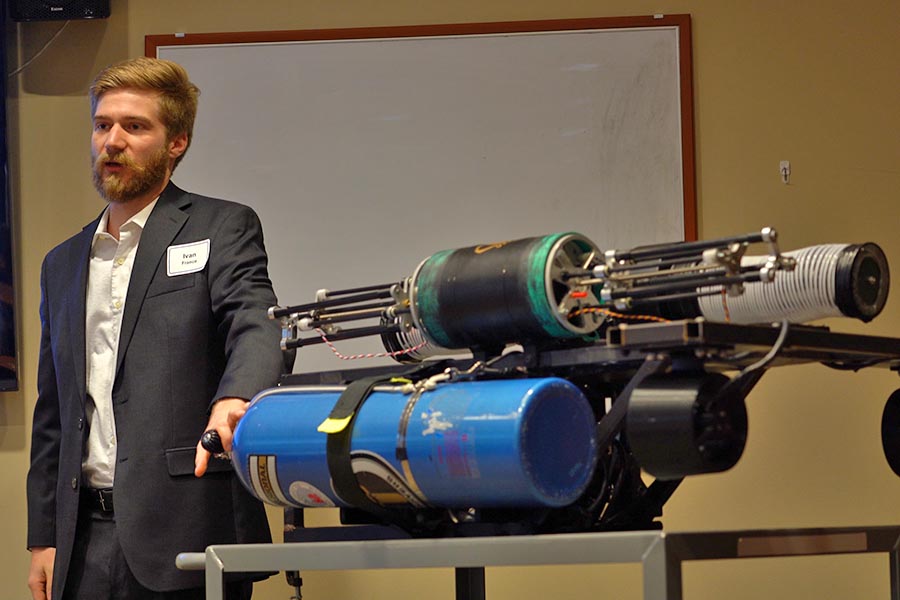 3rd Place: Underwater Robotic Oxygen Portability Assistant (UROPA), Ellis Tirman, Andrew Violette, Ivan France, David Dobben, Szymon Cias, Hyukjun Jang.  Roughly 30% of the global freshwater supply is stored as groundwater and is susceptible to pollution from the extraction activities of oil & gas companies. Subterranean divers map the structure of these caverns to minimize the risk of exposure. The undertakers of this mission breathe only the oxygen they bring with them and are frequently hours from the nearest exit. The physical equipment burden drains their stamina and limits the extent to which they can perform their research.  Our solution is U.R.O.P.A., an autonomous underwater vehicle (AUV) that acts as a self-guided assistant, transporting life-critical equipment on the diver’s behalf. This feat is achieved with autonomous-following capabilities paired with dynamic buoyancy control, enabling the diver to hot-swap gas tanks in the field. Through lessening the equipment burden, divers enjoy extended range without decrease in agility or safety. As a result, operating costs are reduced, leading to improved integrity of the freshwater supply. 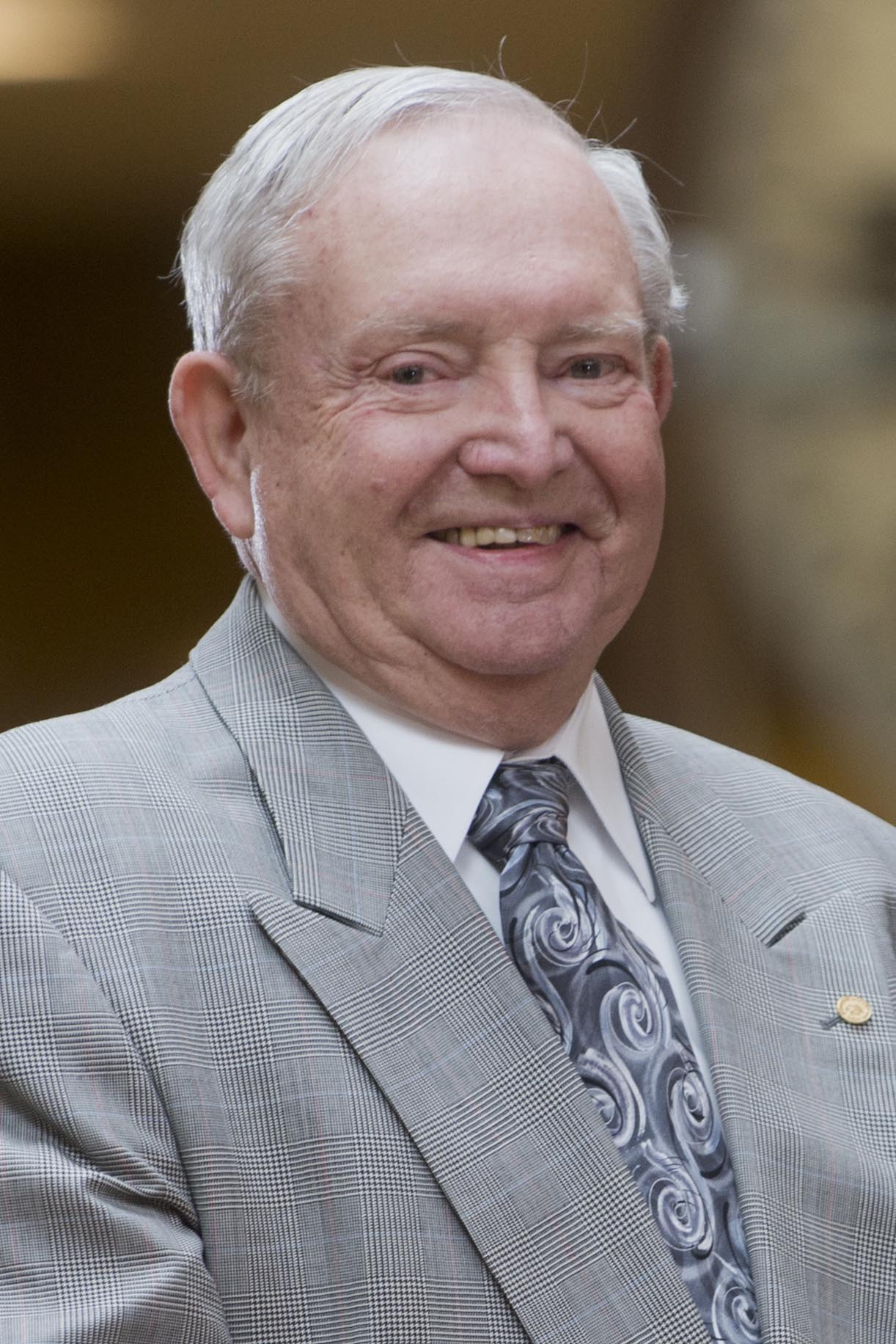 About the Malott Innovation Awards

The Malott Innovation Awards are supported by an endowment created in 2007 by Thomas J. Malott (BSME '62, HDR '02), to foster an innovation culture among Purdue Mechanical Engineering students.  Malott is the former president, CEO and director of Siemens Energy and Automation.  His career included executive positions with Parker-Hannifin and the Ransburg Corp., as well as serving on several corporate boards.  He was an inaugural member of the Purdue Foundation Development Council and was awarded the Outstanding Mechanical Engineer and Distinguished Engineering Alumnus awards in 1991 from the university.