John Vellinger: From Chix in Space to a Company in Space

What do you say about someone who has had the same job since the 8th grade? As a student in the 1980s, John Vellinger (BSME '89) won a contest that sent chickens into space. He then utilized that experience to found a company called Techshot, which custom-builds experimental modules for the International Space Station.

As in many of these stories, the initial inspiration came from a science teacher. At Tecumseh Junior High School in Lafayette, Indiana, John’s 8th grade teacher had noticed his science fair project (a machine that made artificial snow), and decided he was the perfect person to enter an ambitious contest sponsored by NASA and the National Science Teachers Association.  “I remember there was a poster on the wall that said ‘Launch and Land Your Experiment,’” says John. “They were challenging students to come up with an experiment that would be launched on the Space Shuttle.”

“We actually raised chickens at our house,” said John. “It was very interesting to see the hen roll the eggs over, naturally countering the effects of gravity.  If you take that chicken egg and put it into space, where there is no gravity, how is that baby chick going to develop?”  John put together a prototype -- a wooden box that would hatch chicken eggs aboard the Space Shuttle.  His design won the regional competition, and he presented it at NASA’s Marshall Space Flight Center in Huntsville, Alabama. While it didn’t win the national competition, John was inspired to continue refining his design.  He entered again the next year, but didn’t win. His third entry, however, became the national winner -- with a potential flight slot on the Space Shuttle. 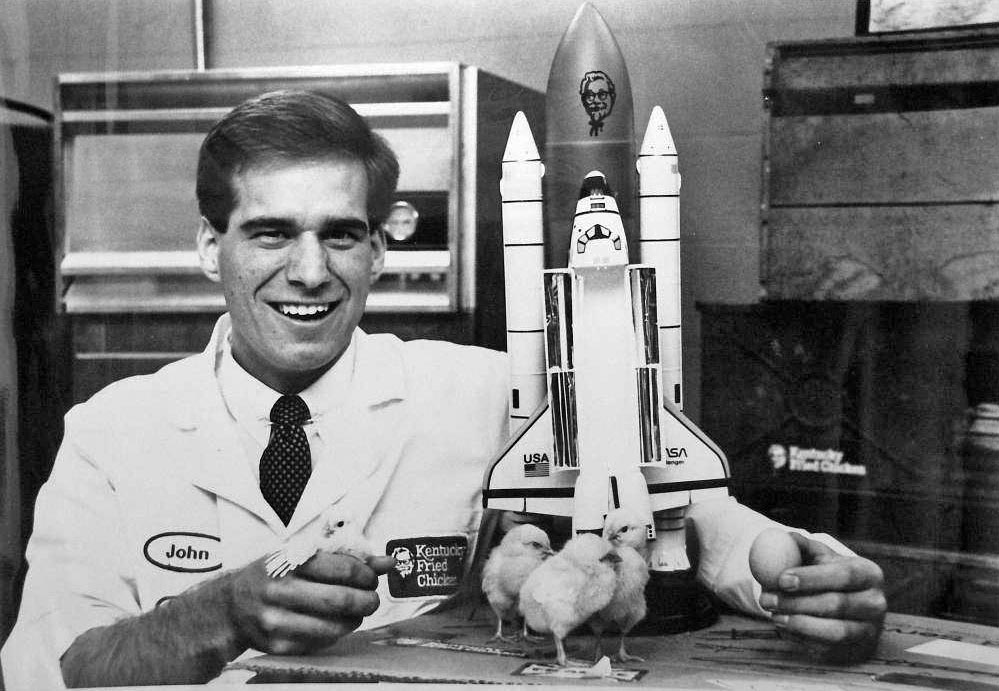 Enter Kentucky Fried Chicken.  “NASA liked to hook up contest winners with a corporate sponsor,” says John. “You might have a good idea on paper, but there’s no guarantee it can be developed enough to fly into space.  Kentucky Fried Chicken were so excited to get involved, and were fully behind the research aspects.  So during my summers off from Purdue, I would go down to Louisville, Kentucky, and work with Kentucky Fried Chicken on this experiment.”

By this point, John had enrolled in Purdue University as a mechanical engineering student.  “It was a natural choice for me to go Purdue,” he says.  “They have so many affiliations with the space program, and so many technologies that helped me along the way.  I studied Heat and Mass Transfer, and applied those concepts to the incubator for the chicken eggs.  It wasn’t easy, but it challenged me and brought out the best of me.”

The triumvirate of Purdue, NASA, and KFC proved vital for the advancement of chicken science, but also for John’s business acumen.  Kentucky Fried Chicken gave John media training, so he could talk to television reporters.  They branded the experiment “Chix in Space,” and produced mission patches with a cartoon chicken on a rocket.  They also made the fateful decision to fly John’s experiment on the Space Shuttle Challenger in 1986.  “It made sense that this student experiment should be conducted by the first teacher in space,” says John. “So I had the opportunity to train Christa McAuliffe, and work with her and her backup, Barbara Morgan.  It was very exciting.  I was in awe of actually being there and working with these astronauts.”

It also meant that John was at Cape Canaveral for the launch on January 28, 1986.  After 73 seconds, Challenger exploded in a catastrophic accident.  It’s difficult to imagine how John felt, seeing his friends and his life’s work disappear in front of him.  “It was a tragic day,” he simply says.  “A horrible day.”

Challenger might have grounded the Space Shuttle program, but it didn’t ground John Vellinger’s ambitions.  Kentucky Fried Chicken agreed to re-fund the experiment, and John continued to refine the design, while finishing his mechanical engineering degree at Purdue.  After three years, they got the go-ahead from NASA to re-launch “Chix in Space.”  On March 13, 1989, Space Shuttle Discovery launched from Cape Canaveral with five astronauts, and 32 fertilized chicken eggs.

For John, it was the culmination of years of work.  “I remember being in Florida for the launch,” says John. “I had tears streaming down my face.  I had started this project as an 8th grader, and the journey I’d taken since then -- the multiple prototypes, the Challenger experience -- now there it is!  It’s finally in space.” 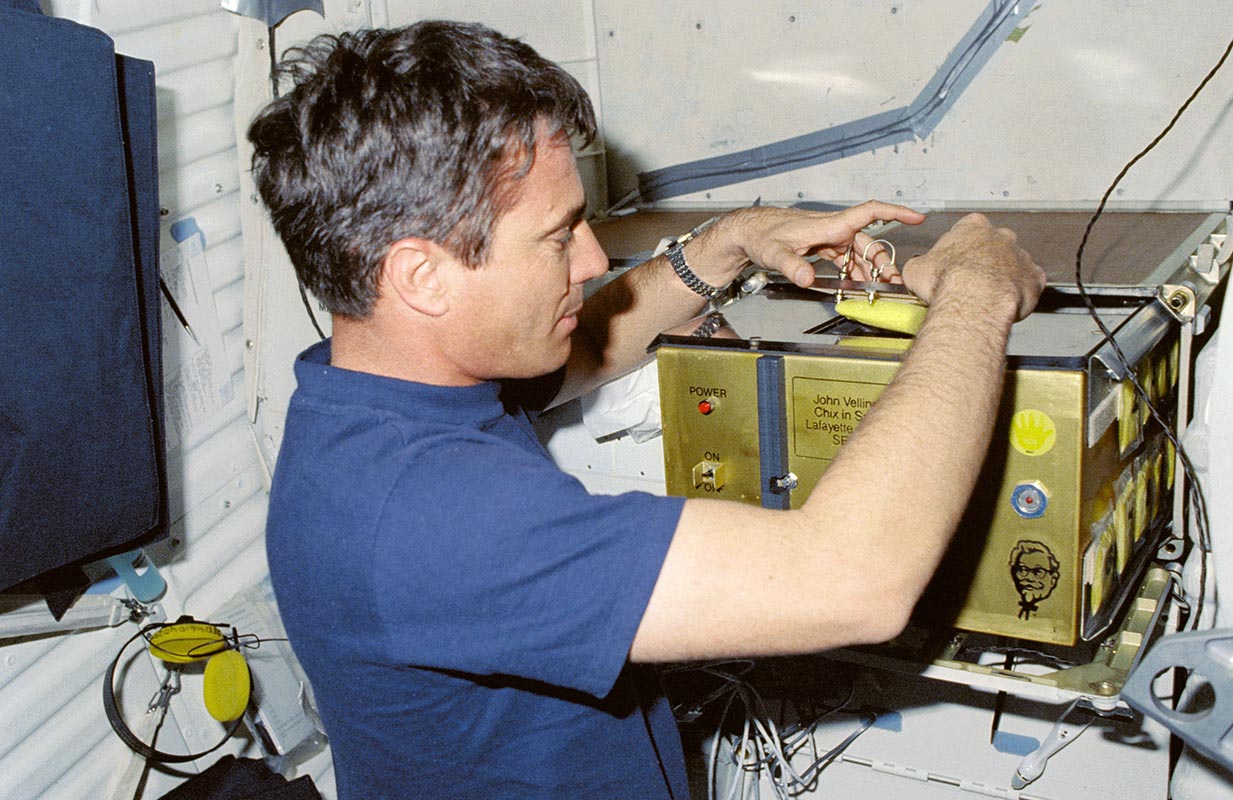 Purdue graduate John Blaha (MSAAE ’66) operated the experiment onboard Discovery.  “It was so cool that the astronaut I worked with was a Purdue grad,” says John.  “The experiment couldn’t have gone better.  We had one experiment module in space, and an identical unit on the ground that duplicated the temperature and humidity conditions.  When the Shuttle landed, we were on the runway, so we could immediately compare the eggs from both units.  We even let a set of eggs hatch out when we came back to Purdue, and those chickens had eggs which also hatched out!”

For many people, “Chix in Space” would be a once-in-a-lifetime experience.  But John Vellinger saw something more.

“My mentor at Kentucky Fried Chicken was an engineer named Mark Deuser,” says John.  “Mark and I were told that we worked well together developing these concepts, and that NASA needs more innovation like this.  We decided to start a company to do this full-time.  And that’s all I’ve been doing for the past 30 years!”

The company they created, Techshot Inc., now creates experiment modules for the International Space Station, specifically focused on biomedical applications.  “We’ve gone from Chix in Space to now being able to conduct all kinds of bioscience in space,” says John.

Consider their latest module, the Multi-use Variable-gravity Platform (MVP), installed on the International Space Station in March 2018 by Purdue graduate Drew Feustel.  About the size of a small microwave oven, this device has two centrifuges which can simulate different levels of gravity under identical conditions.  Scientists can put identical vegetable or animal samples in each of the centrifuges, and spin them to compare how they would develop on the gravity of Earth (1.0 g), Mars (0.38 g), the Moon (0.16 g), or deep space (0.0 g).

“The research conducted on the International Space Station has direct benefits to people here on earth,” says John.  “For example, astronauts experience bone loss while in microgravity. So we developed a bone densitometer that could actually X-ray mice in space, and study different treatments to deal with this bone loss.  This could lead to treatments for osteoporosis and other conditions here on earth.”

Techshot’s engineers are also developing the future of biomanufacturing in space.  They recently demonstrated a 3D printer capable of manufacturing human tissues in microgravity.  “The unique thing about 3D bioprinting in space is that you don’t need support structures to hold up the tissue,” says John. “Because there’s no gravity, you can use a lower viscosity material that vascularizes more easily.”  John foresees a time when patients in need of skin grafts, heart patches, or other small tissues or organs will send a 3D printer into space, print the organ, let it vascularize for 30-40 days, and then return it to earth for implantation. “This is something that can only be done in a microgravity environment,” he says, “and as space launches become more common, space-based bioprinting can become a real game-changer for human healthcare.” 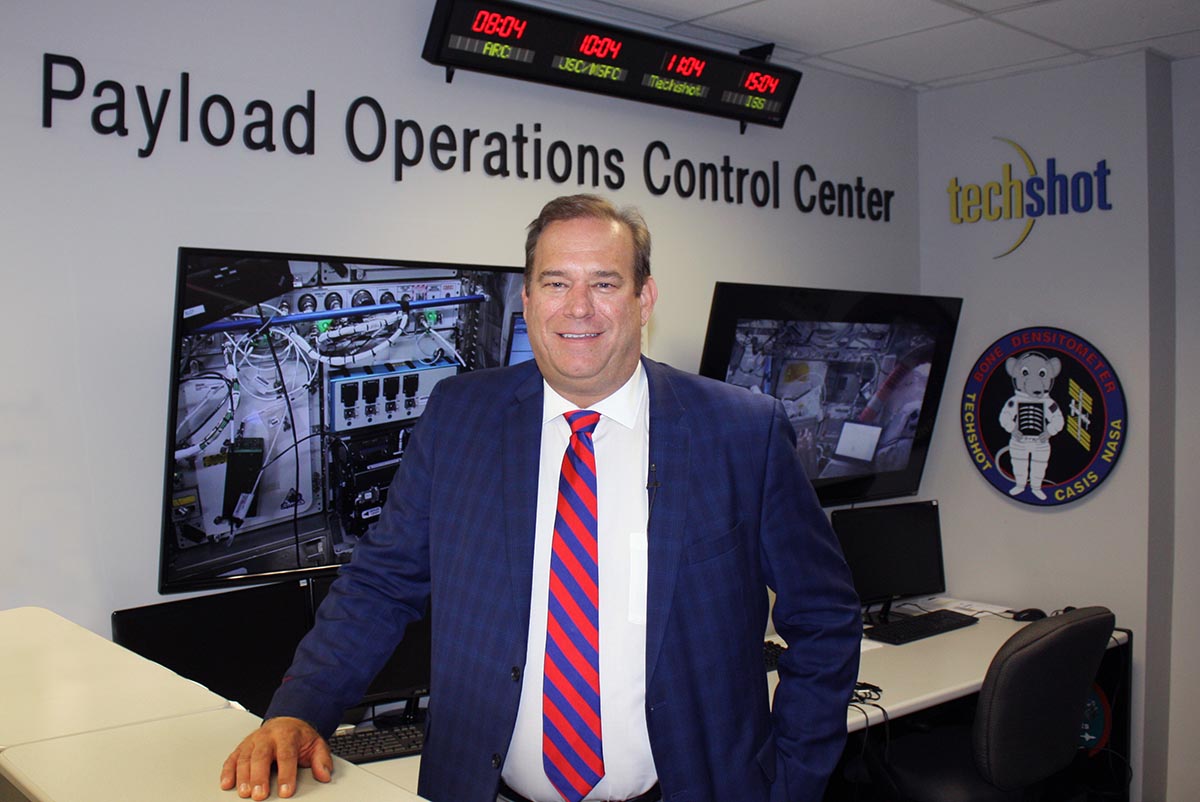 These futuristic devices originate from Techshot’s unassuming offices in Greenville, Indiana, a small town near Louisville, Kentucky.  Clearly this company of 50 employees punches far above its weight class.  “We actually have a Payload Operations Control Center here in the building,” says John.  “We support the hardware up in space, and guide the crew on the International Space Station as they use the equipment.  All right here from Greenville, Indiana.”  John even had the opportunity to speak at the White House in June, advising the National Space Council about the work of Techshot.

John says it wouldn’t have been possible without Purdue University.  As an example, he points to the MVP experiment module, and then to a giant stack of paper notebooks. “The MVP experiment itself weighs 70 pounds,” he says, “but the paper documentation required by NASA weighs 600 pounds!  You can have good ideas, but the implementation of those ideas requires you to drill down into the details.  And that’s what Purdue taught me.  They gave me the building blocks to be a solid engineer, but they also helped me become a strong businessman.  They taught me the processes and procedures to take those ideas and turn them into reality.”

“I enjoy the innovation,” John says. “I enjoy the challenge.  I was told that a bone densitometer would never make it into orbit -- but we found a way to do it.  I get to work with creative people, and create the latest technology. It’s really a dream job.  And we’re having a positive impact here on earth.”