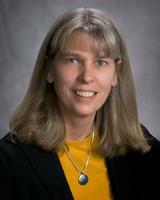 Jill Hruby
Jill M. Hruby today was named the next president and director of Sandia National Laboratories, the country’s largest national lab. She will be the first woman to lead a national security laboratory when she steps into her new role July 17.

A Sandia staff member and manager for the past 32 years, Hruby most recently served as a vice president overseeing Sandia efforts in nuclear, biological and chemical security; homeland security; counterterrorism; and energy security.

Hruby will be the first woman to lead any of the three national security labs - Sandia, Los Alamos and Lawrence Livermore national laboratories - under the Department of Energy’s National Nuclear Security Administration (NNSA). She succeeds Paul Hommert, who is retiring July 16 after serving as Sandia president and laboratories director since 2010.

Hruby's appointment was announced to the Sandia workforce this morning by Rick Ambrose, who chairs the board of directors for Sandia Corp. and is the executive vice president of Lockheed Martin Space Systems. Sandia Corp., a wholly owned subsidiary of Lockheed Martin Corp., operates Sandia Labs for the NNSA.

"The board looked at a number of outstanding candidates," Ambrose said. "We saw right away that Jill has the right combination of technical expertise and strategic vision to lead Sandia into the future. With more than three decades of experience at Sandia, she understands the core national security missions and scientific foundations that are fundamental to the labs' success."

Hruby said she was at the same time honored and humbled by her selection.

"Leading Sandia is a tremendous responsibility because of its importance to the security of our nation and the phenomenal engineering and scientific talent here," Hruby said. "I embrace the opportunity to maintain the U.S. nuclear deterrent and lead Sandia in solving the difficult security challenges we face as a nation. I'm proud to be the first woman to lead an NNSA laboratory, but mostly I'm proud to represent the people and work of this great lab.

"Paul is leaving Sandia with the necessary fundamental elements in place, and it's personally gratifying to follow such a dedicated, visionary leader. I've assured him, the National Nuclear Security Administration and the Department of Energy that we will continue to deliver on our weapons Life Extension Programs on schedule and on budget. We also will build on his recent efforts to strategically advance our broad national security contributions, strengthen our basic research and expand the transfer of Sandia innovations to the U.S. economy."

"During Paul's five-year tenure, he strengthened the development of Sandia's people, expanded its partnerships with universities and small businesses and continued its longstanding focus on safety, security and exceptional performance," Ambrose said. "We're grateful for his leadership and his contributions to Sandia and the nation."

Hommert called Hruby the "ideal national lab director" and praised the board for selecting her.

"Jill is a person of tremendous talent, someone who will make sure the labs are ready for expanded roles with a wide variety of new strategic customers. We have a tradition of delivering with excellence on our national security commitments, and there is no one more qualified than Jill to lead those efforts," Hommert said.

Hruby joined the technical staff at Sandia's California laboratory in January 1983, working in thermal and fluid sciences, solar energy research and nuclear weapon component research and development. During her career, she also has done research in nanoscience, hydrogen storage, mechanical-component design and microfluidics.

She earned her first management appointment in 1989, and held technical leadership positions at the California lab in polymer and electrochemical technologies, materials synthesis and inorganic and physical chemistry.

Beginning in 1997, Hruby served as a senior manager in organizations responsible for weapon components, micro-technologies and materials processing. She was named a technical director in 2003. For the next seven years at Sandia's California site, Hruby led, first, the Materials and Engineering Sciences Center and its work in hydrogen science and engineering and micro- and nanosystem science and fabrication, and then, the Homeland Security and Defense Systems Center, fostering Sandia work in systems analysis, applied research and systems engineering, primarily for homeland security and nuclear weapons missions.

Hruby came to Sandia's New Mexico site in 2010 as vice president of the Energy, Nonproliferation and High Consequence Security Division and of the International, Homeland Security and Nuclear Security Program Management Unit. In that capacity, she was responsible for more than 1,300 Sandia employees in such diverse areas as nuclear security and nonproliferation technologies; chemical and biological defense and security; homeland security and counterterrorism; and energy technologies.

A native of Ann Arbor, Michigan, Hruby earned a bachelor's degree from Purdue University and her master's from the University of California at Berkeley, both in mechanical engineering. She has authored numerous technical publications, holds three patents in microfabrication and won an R&D 100 Award in solid-state radiation detection. She currently serves on the Threat Reduction Advisory Committee for the Department of Defense, and the Board of Chemical Science and Technology for the National Academy of Sciences. She has served on several university advisory boards, on community boards in Livermore and Albuquerque and as the campus executive at the Georgia Institute of Technology.