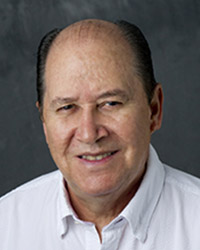 Enrico N. Martinez received a B.S. from National University in Mexico in 1968, and a Ph.D. from the University of Notre Dame in 1972.

Dr. Martinez began his career as a research and development engineer with Química Lucava, S.A., México. In 1972, he joined the faculty of Universidad Nacional Autónoma de México as an assistant professor. In 1974, he rejoined Química Lucava for one year as a research and development manager before returning to academia at the Universidad Autónoma Metropolitana-Iztapalapa, Mexico, where he ultimately became the Dean of Science and Engineering from 1985-1988. Following that, Professor Martinez worked at Industrias Negromex, S.A. de C.V., Mexico, from 1988 to 1999, rising to the level of operations vice president. He then accepted a position as technical director at Dynasol Elastómeros of Mexico and Spain. He remained there until 2005 when he spent one year at Resirene, Mexico, as a new product development manager. In 2007 he returned once again to academia, this time as a professor at the Instituto de Estudios Superiores de Tamaulipas, in Altamira, Tamaulipas, México, where he remained until coming to Purdue in 2009. He came to Purdue as a visiting professor, was appointed a Professor of Engineering Practice in 2015, and serves as the Associate Director of the Purdue-Mexico Center for Sustainability (PMCS). Dr. Martinez is the recipient of the National Quality Award and the National Technology Award, both given by the President of Mexico.

Dr. Martinez’ research focuses on biofuels from natural resources, the synthesis, characterization and applications of styrene-diene block copolymers, and catalysis in biofuels production.