Arden L. Bement Jr., the David A. Ross Distinguished Professor Emeritus of Nuclear Engineering at Purdue, has been named the 2020 recipient of the Arthur M. Bueche Award by the National Academy of Engineering (NAE). 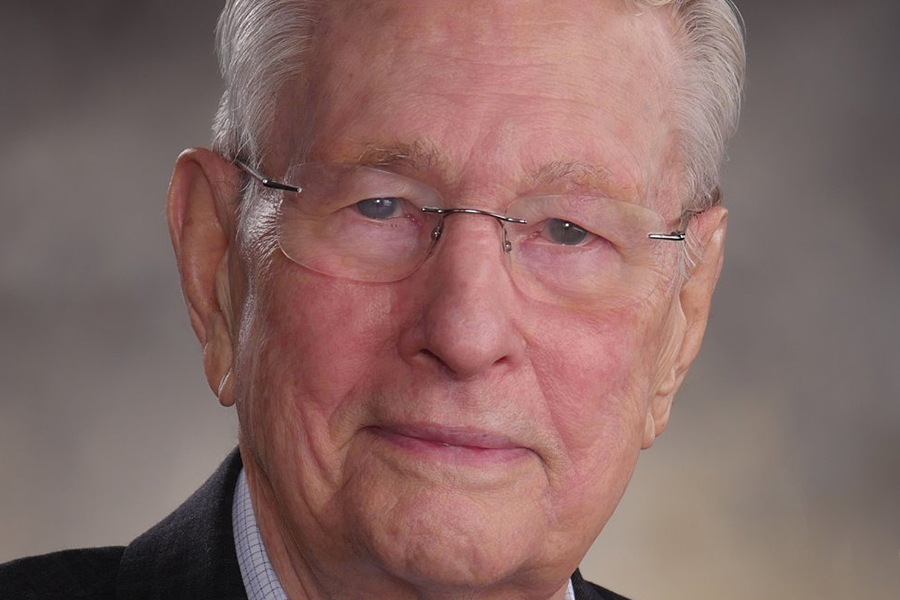 The award, given for extraordinary impact on the engineering profession, was presented on Oct. 4, 2020, during the NAE’s annual meeting. The award recognizes Bement “for contributions to science and technology advancement, international relationships, policy development and academic studies, from executive positions in government, industry and academia.”

During his acceptance remarks, Bement reflected, “This award is especially meaningful to me because it is named for a giant in scientific research, technology commercialization and R&D policy, Arthur M. Bueche.”

Bement came to Purdue in 1993 after a 39-year career in industry, government and academia. He assumed a joint appointment as the Basil Turner Distinguished Professor of Engineering in the Schools of Metallurgical Engineering (now known as Materials Engineering) and Electrical and Computer Engineering. From 1998 to 2001, he served as head of the School of Nuclear Engineering. In 2010, he was appointed the inaugural director of the Global Policy Research Institute (GPRI) and Purdue’s Chief Global Affairs Officer in recognition of his experience in building international partnerships. In this capacity, he promoted and coordinated global relations and collaborative research activities campus-wide.

Before joining Purdue, he served the field of academia as a joint professor of nuclear materials in the departments of Nuclear Engineering and Material Science and Engineering at MIT from 1970-1976.

Bement continues to share his wisdom and talents by participating on advisory committees for Purdue Research Park, the Center on Information Science, and the Purdue Policy Research Institute (successor to GPRI). In recognition of Bement’s achievements, Purdue in 2015 established the Arden L. Bement Jr. Award, which the University has designated its “most prestigious award bestowed in pure and applied science and engineering.”

Purdue also honors Bement with a lecture series bearing his name. This year’s event is scheduled for livestreaming at 3 p.m. on Tuesday, Oct. 13. For more information on the 2020 Arden L. Bement Jr. Distinguished Lecture, click here.

College of Engineering Acting Dean Mark Lundstrom lauded Bement’s wide range of experience and contributions, saying, “This prestigious award recognizes Arden Bement’s profound impact on science and technology policy nationally and internationally, and the pivotal role he has played in promoting collaborations between academia, industry and government that drive innovation in the U.S. and beyond.”

Bement is a retired lieutenant colonel of the U.S. Army Corps of Engineers.

At NIST, he oversaw the definitive investigation of the collapse of the World Trade Center towers. He also offered NIST standards support to the Department of Homeland Security during its startup phase, especially in the areas of detecting nuclear materials at seaports, baggage and passenger screening, biometric screening, and the use of gamma radiation to destroy anthrax in mail.

As director of the NSF, Bement persistently advocated for funding increases for the foundation. He employed the government-university-industry partnership model inherent in NSF’s center programs to help stimulate innovations, entrepreneurship and economic growth. He also placed high priority on increased funding for the NSF’s science and technology centers as well as for the Office of Cyberinfrastructure.

Under the Obama Administration, Bement worked with leaders of Congress to include funding for universities under the American Recovery and Reinvestment Act of 2009 (ARRA). His efforts yielded a substantial increase in NSF’s regular budget as well as $2B in additional funding under ARRA.

In 1968, Bement assumed leadership of the Department of Fuels and Materials at Pacific Northwest Laboratories, which included research units in advanced fuels design and fabrication, irradiation effects on fuels and structural materials, radioisotope power sources for NASA’s deep space exploration and space communications, and industry-sponsored research projects contracted with the Battelle Memorial Institute.

In 1980 Bement joined TRW, a major American industrial corporation providing advanced technology products and services primarily in the automotive, defense, and aerospace sectors.  From 1980 to 1988, he served as the vice president for technical resources, and from 1988 to 1992, as vice president for science and technology. In this capacity, he led company-wide programs in the acquisition of advanced technologies of high strategic value to TRW’s businesses.

For his work building international scientific and technological partnerships, Bement was appointed to the French Legion of Honor with rank of Chevalier by the President of France in 2011, and in 2012 was honored with the Order of the Rising Sun with Gold and Silver Star by the Emperor of Japan. He was inducted as a Chieftain of the Council of Sagamores of the Wabash by Indiana Governor Mitch Daniels in 2012.

He holds honorary doctorates from Cleveland State University, Case Western Reserve University and the Colorado School of Mines, as well as a Chinese Academy of Sciences Graduate Honorary Professorship.