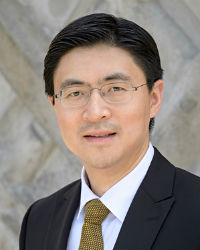 The John A. Edwardson Dean of Engineering and Roscoe H. George Professor of Electrical and Computer Engineering

Dr. Chiang received his B.S. (Honors), M.S. and Ph.D. from Stanford University in 1999, 2000, and 2003 respectively. Prior to coming to Purdue he was the Arthur LeGrand Doty Professor of Electrical Engineering at Princeton University. He also served as Director of Keller Center for Innovations in Engineering and was the inaugural Chairman of Princeton Entrepreneurship Council.

His research on networking received the 2013 Alan T. Waterman Award, the highest honor to US young scientists and engineers. His textbook “Networked Life” and online course reached 250,000 students since 2012, and the popular science book “The Power of Networks” was published in 2016. He founded the Princeton EDGE Lab in 2009, which bridges the theory-practice gap in edge networking research by spanning from proofs to prototypes. He co-founded startups in mobile, IoT and big data areas, and co-founded the global nonprofit Open Fog Consortium.