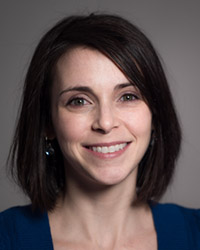 Dana Weinstein received her B.A. in Physics and Astrophysics from University of California - Berkeley in 2004 and her Ph.D. in Applied Physics in 2009 from Cornell, working on multi-GHz MEMS.

Prior to coming to Purdue, Dr. Weinstein joined the Department of Electrical Engineering and Computer Science at MIT as an Assistant Professor, and served as an Associate Professor there between 2013 and 2015. She is the recipient of the NSF CAREER Award, the DARPA Young Faculty Award, the Intel Early Career Award, and the IEEE IEDM Roger A. Haken Best Paper Award.

Dr. Weinstein’s current research focuses on hybrid MEMS-IC devices for low-power wireless communication, microprocessor clocking, and sensing applications. In particular, she is working to harness the benefits of acoustic vibrations to enhance the performance of next-generation electron devices.