The houses look like ordinary 1920s bungalows on the edge of Purdue University’s campus, but looks deceive. The two homes have been completely updated by Purdue mechanical engineers and industry partners as models of net-zero energy and water that could someday become the national standard. They are also Purdue Engineering graduate student residences, serving a unique role as living laboratories where water and electricity use is closely recorded.

The first project, which began five years ago, is known as the ReNEWW House (Retrofitted Net-zero Energy, Water and Waste). It is a generously sized family home with three bedrooms, two bathrooms and a full basement, totaling 2,864 square feet. Once heated by coal, the home now offsets all its energy use with solar power, relies on rainfall as a water source and uses waste-handling systems, such as composting toilets, to prevent household waste from going to the landfill.

The other house next door is the DC Nanogrid House, where conversion has been under way for the last year to operate it wholly on DC power. “Advances in high voltage DC transmission lines and a national interest in the future of the electrical grid in the United States have prompted the discussion of the increased use of DC electricity in residential homes and commercial buildings alike,” says project director Eckhard Groll, the William E. and Florence E. Perry Head of Mechanical Engineering, and Reilly Professor of Mechanical Engineering. 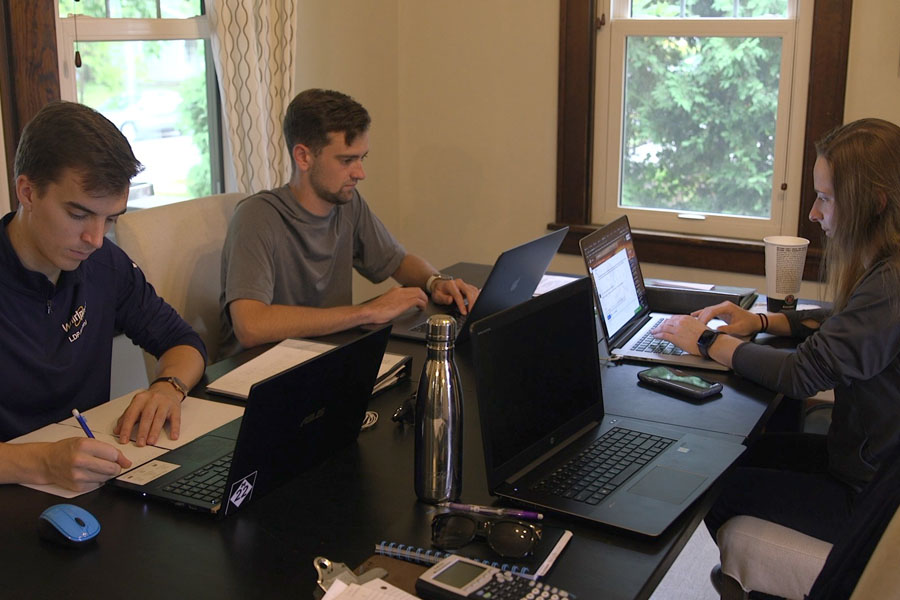 The two houses are unique for serving as graduate student residences and occupied living laboratories that collect data on real human use. Other existing research models around the country are unoccupied and only simulate use.

According to the U.S. Department of Energy, residential housing accounts for 22 percent of the total primary energy usage in the nation. Over two-thirds of this energy is used for heating and cooling, appliances and water heating. Energy updates to both homes include new appliances and water heaters; new insulation and HVAC systems; composting toilets; new lighting, three-pane windows and insulated doors; and new siding and roofing. A solar thermal (PVT) system on the roof of the ReNeWW house project, which started three years ago, now generates as much energy in one year as is used inside the house.

Water waste is also a problem with most houses. The average person in the U.S. uses 91 gallons of water per day, which translates into roughly $1,000 per American family per year for water usage. Much of this water usage is potable, treated water that is flushed immediately down the drain. Purdue engineers installed water-efficient Kohler fixtures and Whirlpool appliances, as well as onsite rainwater harvesting and filtration for all potable water applications. In an effort to offset potable water usage for toilet flushing, a CleanBlu Greywater treatment system was installed onsite. With these changes at ReNEWW house, its current residents have been consuming roughly 21 gallons per person, per day, an estimated 75 percent reduction in water usage. 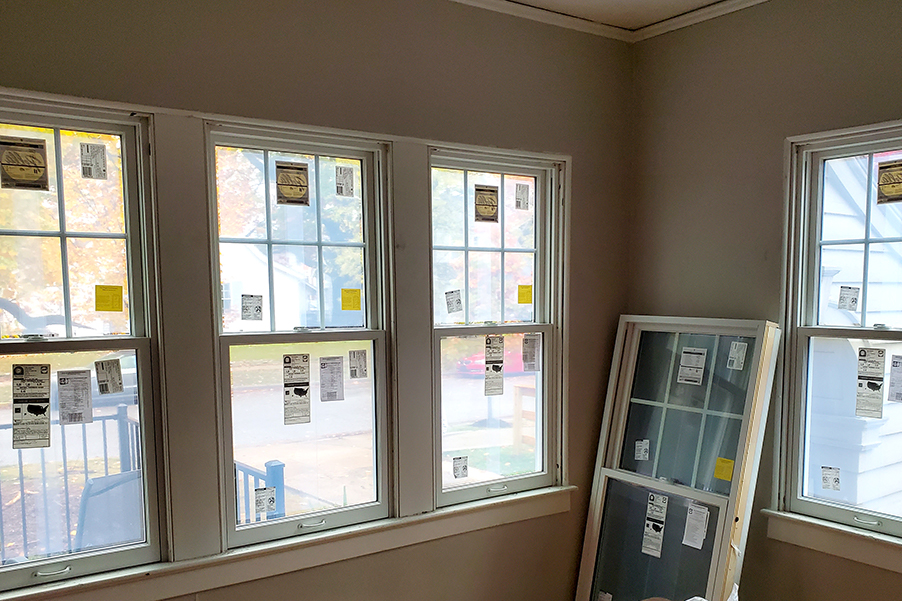 Power across the U.S. is currently provided by high-voltage AC, although most small electronic devices including cell phones, laptops, LED light bulbs, and rechargeable shavers already use DC power that is converted at the point of use. Solar photovoltaics that capture solar energy, however, generate DC power and typically rely on a system of converters and inverters to create AC power and synchronize with the AC grid. Efficiency and cost savings could be realized by eliminating the heat and energy loss that occurs with the numerous conversions from DC to AC that are now required.

DC Appliances in the Future

Many common appliances used in homes are only manufactured to run on AC power. That makes building a home based on only DC voltages a challenge, and it’s one of the key efforts the DC Nanogrid House project seeks to tackle. Whirlpool is developing a DC-powered dishwasher prototype for use in the Purdue house, for example. Trane has also modified a heat pump system to run on both AC and DC power, which can be used in a traditional AC-powered home or the DC House without any adjustments. The overall project will measure how new technologies, DC-powered appliances, and other building equipment (such as lighting) perform when designed to run directly on DC power.

“Industry is interested in DC power, but the appliances don’t exist, so we are bringing together the building industry, appliance and energy companies and are all working together to prototype this. With knowledge of the energy savings, though, will consumers change their behavior? This is one of the unknown research questions,” says Groll, whose research interest lies in energy use and reduction. Industry partners on the DC project include United Technologies Carrier Corp., Duke Energy, Southern California Edison, Rheem Manufacturing, Whirlpool Corp., Ingersoll Rand, Daikin Global, and Regal Beloit Inc. 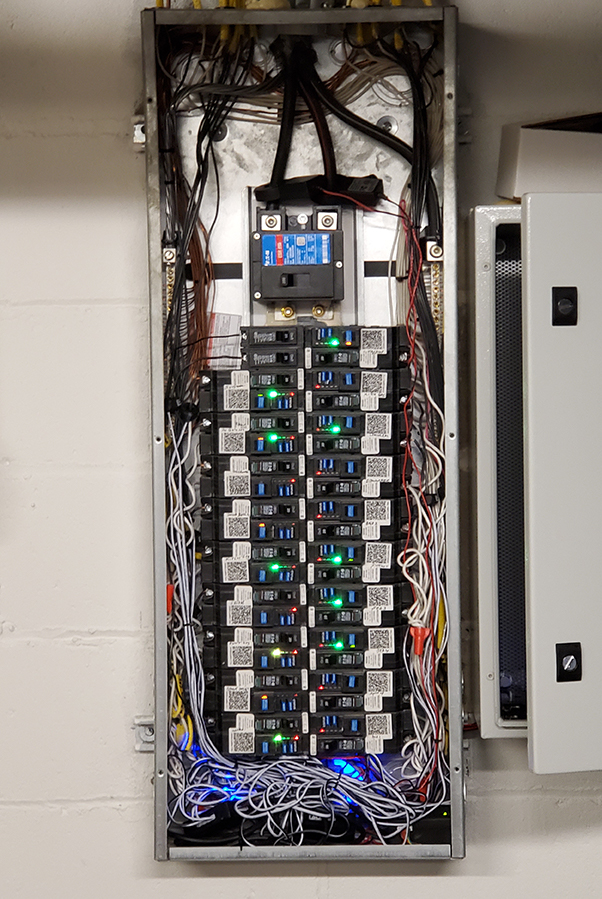 Instrumentation of the AC load panels allows researchers to monitor energy usage across every appliance and connection in the house. 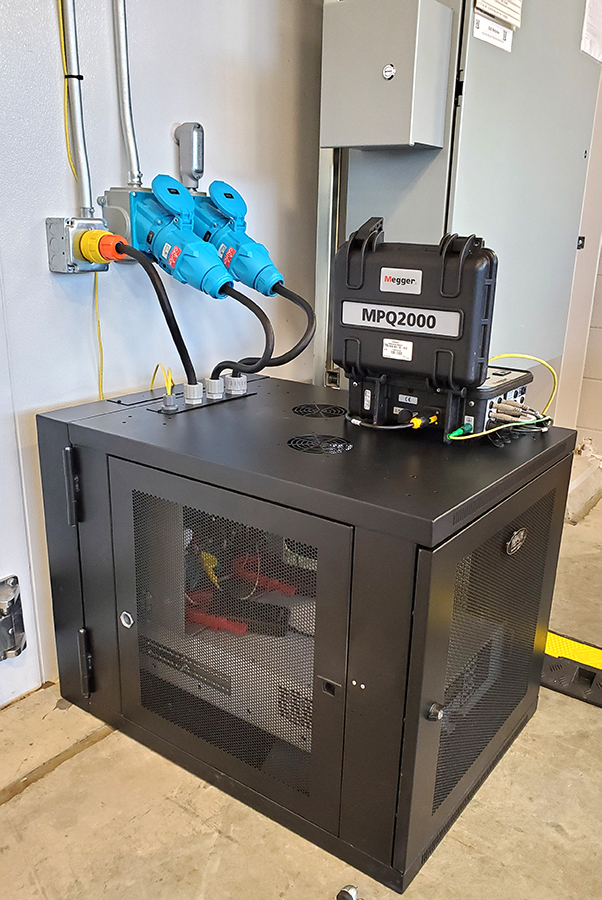 Heat pump retrofitted for DC power being tested at Purdue University's Ray W. Herrick Lab for future use in the DC Nanogrid House.

The DC Nanogrid House project has completed its initial phase, which involved instrumenting the house with a variety of sensors to compile a baseline energy consumption profile. The house has also undergone a complete electrification process, removing natural gas usage and substituting appliances with electrical versions instead. A variety of energy efficiency improvements have been made to the home, including foam-injection insulation, replacement of the original windows with modernized triple-pane models, and installation of a new variable-speed heat pump system.

A 14.3 kW rooftop solar installation has also been completed, which will soon be followed by the DC grid and battery storage system. The house will ultimately be completely DC-powered, with baseline AC energy measurements compared to the DC configuration to determine overall energy improvements. 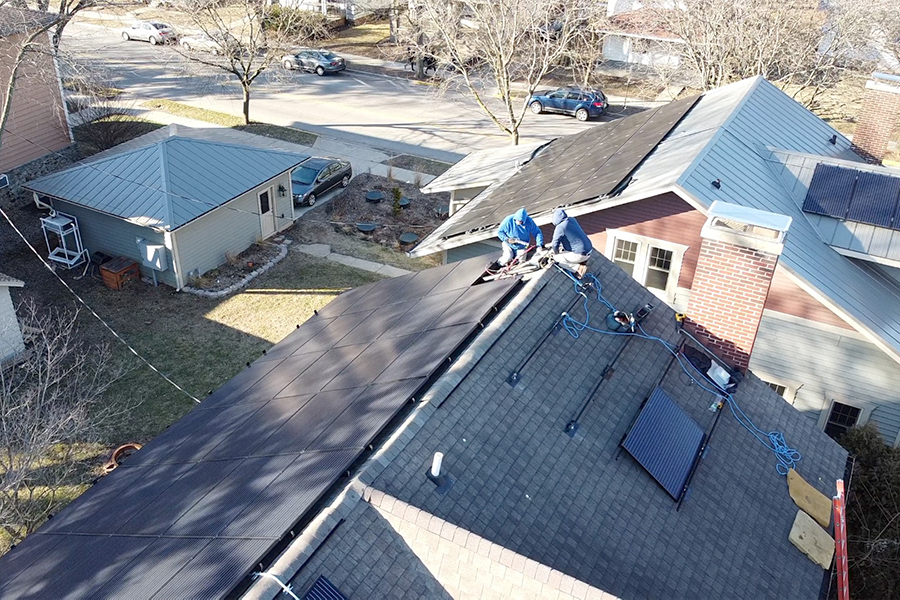 Solar panel installation on the DC House in February 2020.

While some of the energy-saving innovations at the two houses won’t come to the public for a long time, others are closer at hand. Both houses are being studied carefully by the energy, appliance and building industries. The researchers are working with the latter to develop building codes and standards for DC power. Heat pump water heaters are currently available. A panel that alerts homeowners to the energy used by each circuit is close to hitting the market. And photovoltaic (solar) power is already in use.

“This research is an awesome opportunity to demonstrate the potential energy savings associated with DC power, as well as a fundamental restructuring of the power grid from the bottom-up. Renewable energy is popping up everywhere, and this project allows us to work with consumers and utilities alike to envision a blueprint for the future,” says Jonathan Ore, a mechanical engineering PhD student who leads the research at the DC Nanogrid House.