Nancy Afandi, a senior in the School of Materials Engineering (MSE), has gone from extreme hardship in 2011 to being a candidate for early graduation in 2021.

Born in Mbale, western Kenya, she and her younger brother were raised by a single mother who struggled to provide for them. Nancy remembers being interested in creating, designing and building from an early age, and she often fixed things around their house, including broken furniture and electronic devices, to save her mom money. As a fifth-grader, she read in her English textbook about Neil Armstrong traveling to the moon, not knowing at the time that the famous astronaut was a Purdue alumnus. Armstrong’s story further sparked her interest and dream of becoming an engineer.

Nancy Afandi with her family (from left to right grandmother, mother, Nancy, and sister)

Thanks to financial assistance from her aunt, she became a first-generation college student in 2009, moving to California and enrolling in Cosumnes River College, Sacramento.

“But life was quite hard because I also had to take care of my family back in Kenya,” she said, explaining that her mother suffers from arthritis and her grandmother from Alzheimer’s. “I succumbed to a homeless life in 2011.”

She dropped out of college for two years and “tried to reorganize and stabilize my financial situation working two jobs.”

In 2013, she got a new start as a student at Diablo Valley College in San Ramon, Calif., receiving a scholarship from Pacific Gas & Electric, which assisted her financially until she was able to transfer to Purdue in the spring of 2019.

She was awarded a Student Success Scholarship from the College of Engineering, a boost that allowed her to spread her wings and soar.

“Engineering is a broad field and requires a lot of research and homework to be successful. Scholarships help in reducing the burdens we face as first-generation students and give us more time to go to the library and study groups, visit professors and not have to work two to three jobs,” Nancy said.

“Purdue has the best resources any school can offer, and that is the reason I can graduate a year early. Purdue’s motto is ‘Ever Grateful’, and I’m really thankful and ever grateful for the support that Purdue has given me so far. My only hope is that some day I will be able to give back to Purdue.”

Nancy Afandi in a Materials Engineering lab with fellow students.

Each year, students all across the College with differing needs benefit from a variety of scholarships, said Lori Pence, associate director for Student Success in the College. “They are provided by the generosity of our alumni, friends and corporate engagement. Every scholarship endowment and gift is pivotal to transforming the lives of future Purdue engineers and providing the means to succeed.”

In 2019, the College joined other institutions around the country to celebrate the inaugural First Generation College Awareness Week. Now in its fourth year, the next celebration is slated for Nov. 8.

New for the Fall 2020 semester, Purdue Engineering, in its continued vow to remove obstacles and make earning a degree as accessible as possible, provided a $500 textbook and educational stipend to first-generation, First-Year Engineering (FYE) Indiana resident students.

“A lot of firsts!” Pence said. “This initiative is something we would like to continue as well as implement other collegewide first-generation initiatives.”

Helping others through ingenuity and kindness

Nancy said she was attracted to Purdue not only because of its prestigious engineering reputation, but also because of its track record of supporting young entrepreneurs.

She is in the process of launching her startup company, Tekslist, which she describes as a business that bridges the gap between businesses and customers globally. A patent for the company’s technology is pending. “I am hoping to realize its full potential with the help of the Purdue Foundry, Burton D. Morgan Center for Entrepreneurship and secure investments and partners.”

Looking farther into the future, she hopes to put her MSE degree to good use by starting the first semi-conductor and microchip company in Africa.

Nancy also is the founder of Young Conquerors, a 501(c)3 organization she started four years ago with the mission of eradicating poverty in Third World countries and to bring self-sustenance to the youth in these regions. The nonprofit has conducted three successful events in Kenya and Uganda. The first involved the eradication of jiggers, flea-like insects that burrow inside soft flesh, mostly hands and feet. The ensuing result is extreme discomfort when they lay eggs, rendering victims immobile. School children were dropping out of school due to sickness and the stigma attached to the affliction. 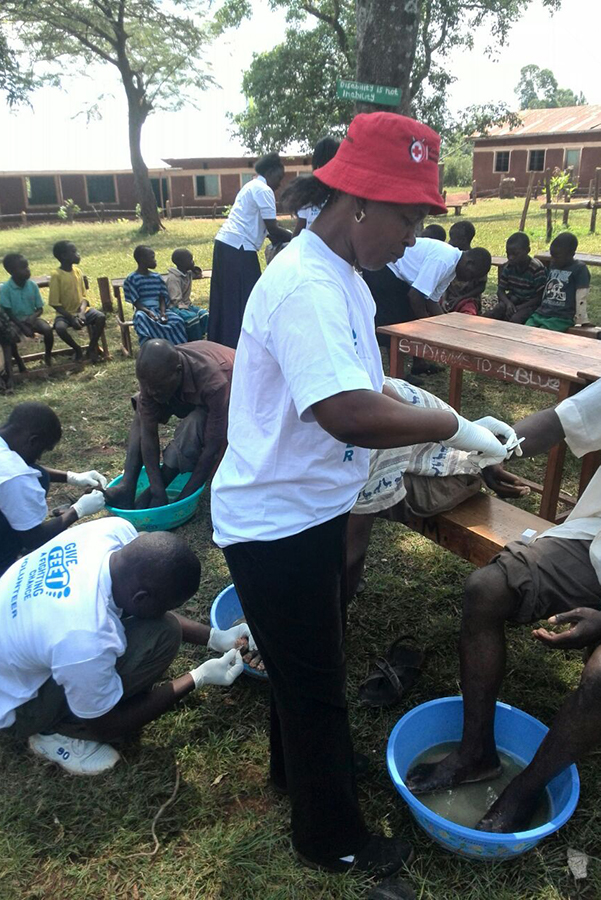 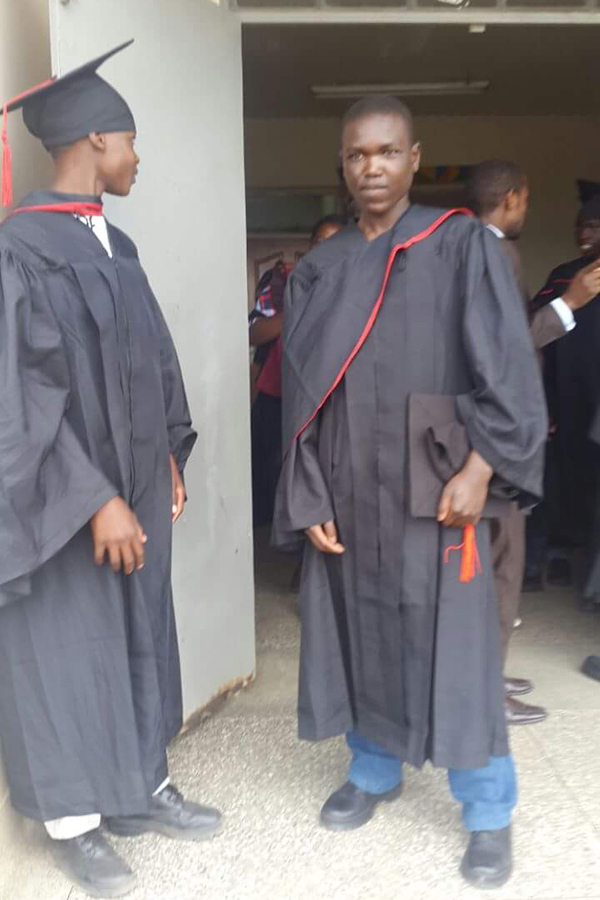 Emmanuel on his graduation day at the rehab center.


“We were able to serve a total of 70 jiggers sufferers that included school children, their parents and elderly locals from nearby villages,” Nancy said. “Working in conjunction with the Red Cross, we also saw the homes of the victims fumigated and health care provided for them during the recovery period.”

The second philanthropic effort involved getting a 22-year-old drug addict off the streets of Nairobi, Kenya, working with volunteers to assess his needs and administer medical care and provide clothing, food, accommodations and rehabilitation.

“He successfully completed the program and is currently off the streets, working as a carpenter,” Nancy shared.

The third project sponsored by Young Conquerors is the ongoing support of an orphanage in Uganda made possible through donations. 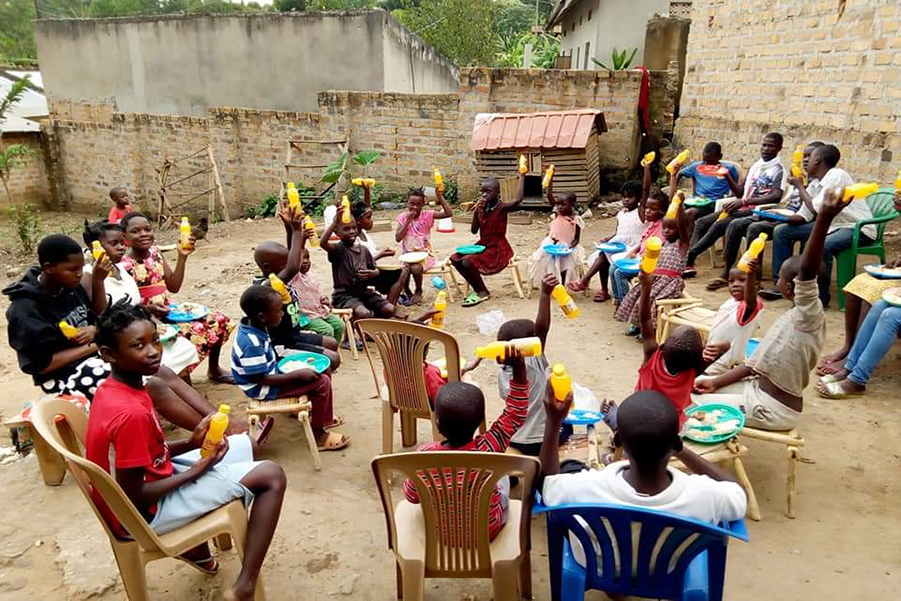 “I am a product of compassion due to the amount of support I received in the form of scholarships, encouragement and prayers,” Nancy said. “The scholarship support I have received from Purdue University and the College of Engineering has helped me focus more on my studies, accelerated my confidence and graduation date, and improved my GPA, which had suffered tremendously the first few semesters.”

Nancy once thought it was a far-fetched aspiration – too much to hope for -- to realize her dream of starting her own tech company in Africa. But not anymore.

“I believe in people, and it is great when people believe in me, too. Like the African philosophy of Ubuntu goes, ‘I am because we are!’”

Nancy with a group of children in Kenya as part of work with her Young Conquerors non-profit.

On Purdue Day of Giving, please help the College of Engineering raise $50,000 to support First-Generation students like Nancy Afandi.