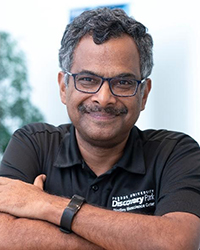 Professor of Biological Sciences and Biomedical Engineering, Director of the Bindley Bioscience Center

Dr. Subramanian earned his Ph.D. in molecular biophysics from the Indian Institute of Science and completed a postdoctoral fellowship at the Swedish University of Agricultural Sciences, where he stayed for eight years as a researcher and docent before accepting a faculty position at the University of Iowa. While there, he worked as assistant dean and director of core research facilities and helped create the university’s structural biology program. He later duplicated this program at inSTEM in India and became the founding dean. He co-founded and served as the first CEO of the Center for Cellular and Molecular Platforms, a life sciences innovation hub for academia, industry and startup companies.

His research interests include the connection between atomic resolution and function of biological molecules, especially proteins and protein complexes. Proteins of specific interest include those involved in sugar uptake, sugar metabolism, glycosylation and nucleotide sugar transport from bacteria, parasites and their hosts.