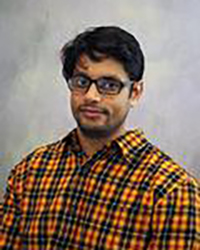 Dr. Upadhyaya earned his bachelor’s degree (2009) from the Indian Institute of Technology, Kharagpur, and his master’s degree (2011) and Ph.D. (2015) in electrical engineering from the University of California Los Angeles (UCLA). He was a postdoctoral scholar in physics and astronomy at UCLA from 2015-2017.

His research focus is on the emergence of novel application space - such as the Internet of Things (IoT), big data applications, brain-machine interfaces and electroceuticals - in conjunction with increased dissipation in ever shrinking present-day electronic devices. The central theme of his research group is “rebooting the IT revolution,” focusing on novel ways to control magnetism via electrical, mechanical, thermal and optical means. In particular, his group is interested in using these recently discovered schemes for realizing magnet-based, energy-efficient computing, communication, quantum and biomedical device applications.