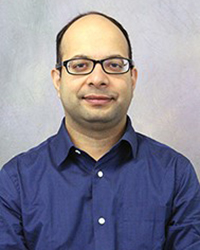 Before coming to Purdue, he was an assistant professor at Penn State University from 2014-2018 and a senior engineer at Qualcomm Inc. in San Diego from 2012-2014. Dr. Gupta received the 2016 DARPA Young Faculty Award, an Early Career Professorship from Penn State in 2014, and the Intel Ph.D. Fellowship in 2009. He has published more than 80 articles in referred journals and conferences and is a member of the Institute of Electrical and Electronics Engineers (IEEE).