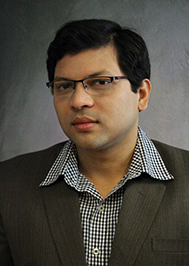 Dr. Sen received his BE in 2006 in Electronics and Telecommunication Engineering, from Jadavpur University in India. His MS in 2009 and PhD in 2011 both in Electrical and Computer Engineering from Georgia Institute of Technology, Atlanta, GA. He has 5+ years of industry experience as a research scientist in Intel Labs, Qualcomm and Rambus.

His research interests include sensing and communication circuits/systems for Internet of Things (IoT), Biomedical and Security.