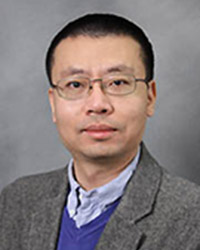 Benxin Wu received his Ph.D. degree from the School of Mechanical Engineering at Purdue in 2007.

Prior to coming to Purdue, Dr. Wu joined the Illinois Institute of Technology (IIT) as an Assistant Professor of Mechanical Engineering in 2007, and received an early promotion to Associate Professor with tenure in 2012.  He has over 40 journal publications since 2005, and has received multiple NSF awards, including the 2011 NSF CAREER award. Dr. Wu also received the 2013 Society of Manufacturing Engineers Outstanding Young Manufacturing Engineer Award, the 2010 Excellence in Research Award and 2013 Excellence in Teaching Award in the Department of Mechanical, Materials and Aerospace Engineering at IIT.