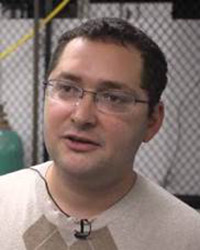 Alexey Shashurin received his Ph.D. from the School of Electrical Engineering at Tel Aviv University in 2008, and a M.Sc. in Plasma Physics from Nizhny Novgorod State University, Russia, in 1998.

Before joining Purdue, he was a research scientist in the Department of Mechanical and Aerospace Engineering at the George Washington University. He has published over fifty refereed scientific articles and filed three U.S. patent applications. He is a Senior Member of the American Institute of Aeronautics and Astronautics and Institute of Electrical and Electronics Engineers societies, and the recipient of the Welch International Award for 2008.

His research focuses on the advanced applications of low-temperature plasmas in various fields including synthesis of nanomaterials, advanced spacecraft propulsion and bioengineering.