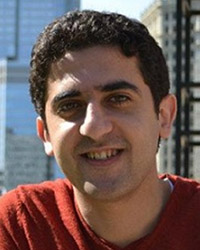 Before coming to Purdue, Dr. El Gamal worked as an intern at the Office of the Chief Scientist of Qualcomm Inc. in 2012. He was a Post-doctoral Research Associate at the Ming Hsieh Department of Electrical Engineering at the University of Southern California from May 2014 to May 2015, and served as a Simons fellow at the University of Texas at Austin from May to August 2015.