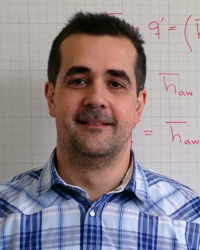 His research focus is on understanding the flow field in transonic turbines. Based on the experimental and numerical results, he proposed passive and active control methodologies of the shock waves such as pulsating cooling and DC electrical discharges. In the area of high-speed propulsion, he has conducted engine intake research (starting issues and surface coolers), pioneering contra-rotating turbomachinery and hybrid engine analysis.

Currently his team aims to develop efficient massively compact fluid machinery suitable for novel engine cycles operating in the supersonic regime. An experimental transient turbine rig will be built at the Zucrow Labs to demonstrate their aero-thermal performance.