Capturing the hearts and minds of engineers, fans and athletes

Sailing is a sport that, like many others, only captures the attention of fans across the globe every four years; it’s a sport that’s hard to understand, has a non-traditional venue, and in certain conditions, can be very boring to watch. But that all changes during the America’s Cup, which is the oldest international sports trophy and is the pinnacle of sailing. The 36th America’s Cup, which just wrapped up last month with Emirates Team New Zealand successfully defending its title, was one to remember for many reasons. For one, it was surrounded by uncertainty as the world was battling a global pandemic. But what really stood out was the proposed boat design: a 75-foot monohull boat, called the AC75, that flies. Many questioned if this was even possible, but the simulations said it could, and thus began a four-year journey of building the first flying boats. 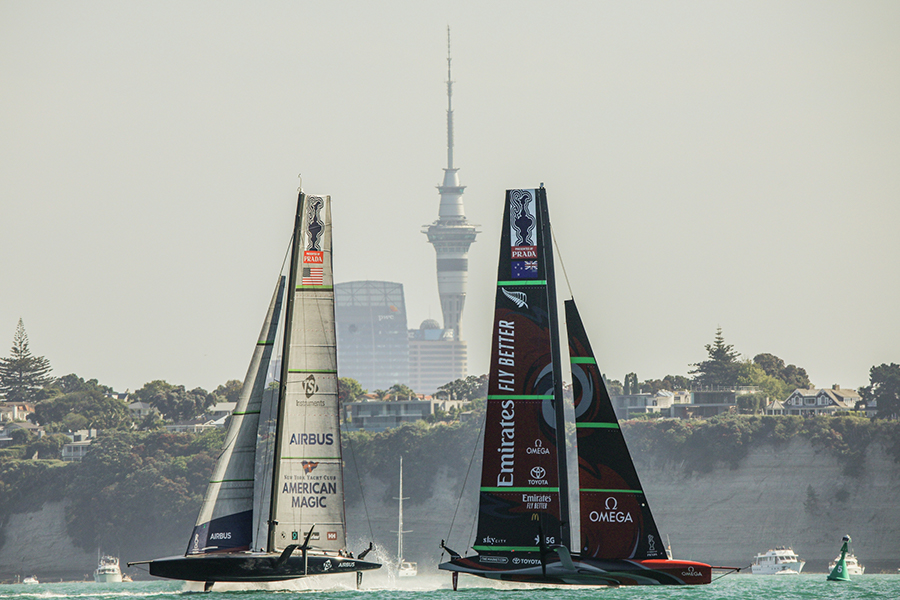 How do you even start designing a boat that is supposed to fly? That’s the question every team was asking after the design for the next America’s Cup boat was released in 2017. It was daunting to think that in less than four years they’d have to figure out not only how to do it, but also how to do it better than every other team. After all, the goal is to win, not just compete. Some teams, including American Magic, built a scaled down version of the boat so that they could figure out the concepts and mechanisms needed to make it work before building the AC75 version. Alex Rudkin, New Zealand Operations Director for American Magic, shared that “this sailing event is way more than just sailors on the water — it’s about first getting the boats faster on paper and physically by the work of the boatbuilders and designers, and then getting it faster on the water by the sailors doing what they know how to do.” It was a full team effort, and the faster teams could move through different iterations of the design process, or move through the vortex of optimization, the faster boat they’d have. Advancements from other industries, like manufacturing, have helped teams go through the vortex more efficiently. For example, Emirates Team New Zealand used AI when designing its boat to test different designs and concepts faster. An added benefit was that the sailors didn’t want to be outperformed by a robot, so they pushed themselves harder than they may have if only challenged by their human competitors. Another example is when American Magic suffered an unfortunate accident, the team used 3D scanning and printing technology to identify where the issues were and then quickly design and test potential solutions.

But these boats are expensive and at times dangerous, so how can this technology be brought to other levels of sailing or even other sports? Most of the tech that will trickle down will likely be related to the race management system, which helped with everything from planning the racecourse to broadcast content and delivery to ensuring the integrity of the competition, to the event delivery, which helped engage and educate fans.

Down in Auckland, the operations team went all-in when it came to engaging fans of all levels. From an operations standpoint, “fan engagement is trying to give the public, fans, and spectators a connection and a lasting memory when they come into the race village; it’s making sure everyone who comes through the village is touched by experiences they would not have seen before,” says Brendan Bourke, Auckland Operations for Challenger of Record. Many people don’t know what it feels like to sail competitively on a boat going 15 mph, let alone what it’s like to be on one of the flying AC75s, making it harder to engage fans in a meaningful way. To help bring the experience of the sailors closer to the fans, the operations team created an activation in the race village that re-creates what being on the boat is like. With VR goggles that fans can put on, it’s a fully immersive opportunity to understand what the sailors are experiencing on the boat. If you weren’t one of the lucky few who got to participate in this activation, imagine driving your car at 57 mph (91 km/h) and sticking your head out of the window while it’s raining and the ground is constantly shifting and shaking. To be able to capture this intense, one-of-a-kind experience into an “amusement park ride” fitted with VR is incredible and is an idea that could help with fan education and engagement in sailing. 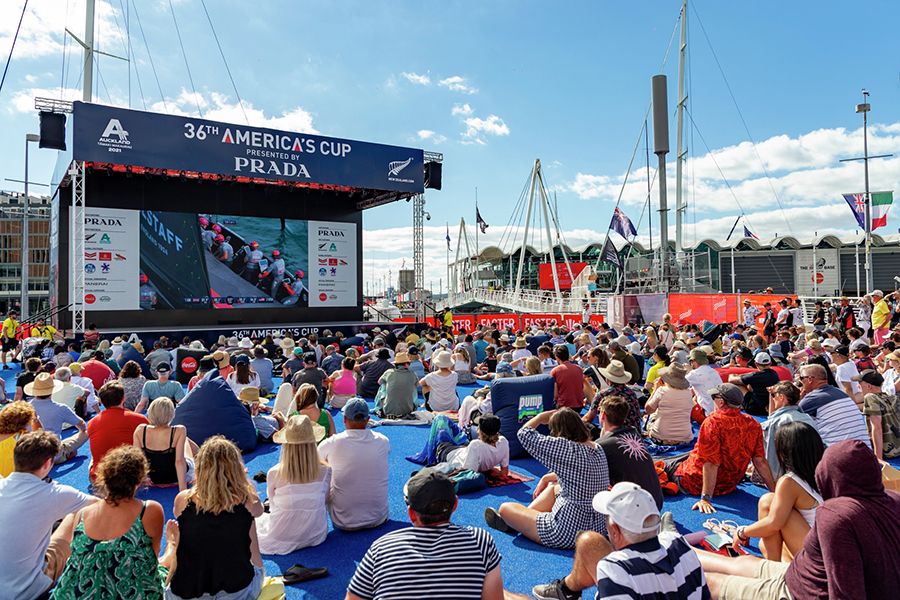 But the fan engagement didn’t end there. The Auckland team had photo walls set up so fans could create their own content to share and remember the time they spent at the race village. The broadcasting team had cameras everywhere — a dozen on each boat plus drones, helicopters, and on the chase boats — to capture every second and every angle of the racing. These cameras, coupled with sensors, helped collect data that was then overlaid on the race footage to help the fans streaming the race understand what was going on. The commentators then were critical to translating that data in ways that the new fan could understand, helping educate them on what’s important in the sport and explaining what was going on during the race. The overlays also helped create a stadium feel by showing where the course boundaries were and other important markers on the course (start line, buoys, etc.). This technology has the potential to change how fans interact with sailing, especially at the Olympic level, and with 5G becoming more accessible, there will be even more ways to engage fans and connect them to the boats.

The humanity of sport 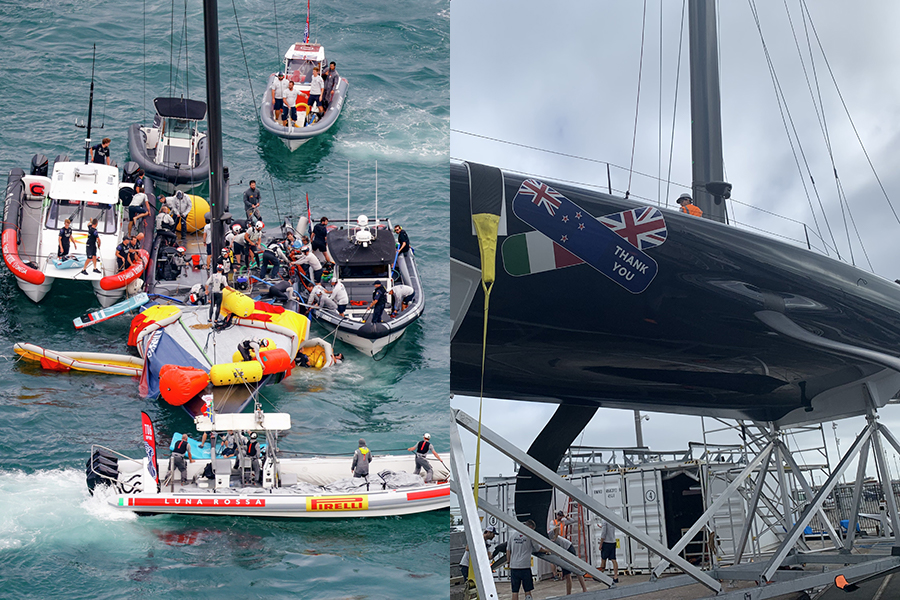 While all the technology advancements are exciting and awe-inspiring, it’s important to remember the foundation upon which sports rest — the athletes. In a world where technology is constantly evolving and advancing, it’s easy to forget the power, dedication, and prowess of the athletes. People are what make sports great, and the role of technology should be to help them achieve their greatest potential, not overshadow all the hard work and sacrifices they have made to get to their level. The humanity of sport is what’s so inspiring, and this was on full display after American Magic capsized and nearly sunk. All the competitors rallied around the American team in a true demonstration of the Olympic spirit. ETNZ offered up space, personnel, and equipment to make a critical structural component and a hull panel to help patch the massive hole in the boat. This degree of trust between competitors, especially at this level of the sport, is extremely rare and is a testament to the character, class, and competitiveness of each team; they all wanted to win, but they wanted to win fairly. The 36th America’s Cup has shown that competition and collaboration can coexist to make everyone better, and as we reflect on the Cup and wonder what the next one will hold, we should never forget the athletes behind the sport.

Alex Rudkin is the New Zealand Operations Director for American Magic, Challenger for the 36th America’s Cup. Solidifying his track record in the Auld Mug, this is the second AC event Alex has worked on; his previous experience was with the 35th America’s Cup in Bermuda. Other events include Volvo Ocean Race and SailGP. Alex was a marketing major at Roger Williams University and a three-time captain of the varsity sailing team.

New Zealander Brendan Bourke is a major events veteran and has worked on a number of international events over the last 15 years, including two Rugby World Cups, three FIFA World Cups, a Cricket World Cup, Commonwealth Games, and the last three years on the 36th America’s Cup, presented by Prada, as part of the Challenger of Record. Brendan’s experience mainly revolves around operational delivery of major sports events.

For more videos, check out the America’s Cup YouTube page.