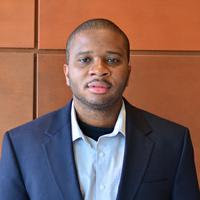 Graduate Student Justus Ndukaife
He was distinguished as the Graduate Student of the Year by the National Society of Black Engineers. He is advised by Professor Alexandra Boltasseva.

Graduate Student Justus Ndukaife has been awarded the Golden Torch Award by the National Society of Black Engineers. He was honored as the Graduate Student of the Year.  Justus is advised by Professor Alexandra Boltasseva.

NSBE supports and promotes the aspirations of professionals, students and pre-college students. The mission the founders set forth in 1975, “To increase the number of culturally responsible Black engineers who excel academically, succeed professionally and positively impact the community, “ has blossomed into an organization with chapters worldwide.

The Annual Golden Torch Awards link the accomplishments of distinguished African- American engineers and technical professionals with college bound dreams of pre-college students. Since its inception GTA has served as a night to honor the best and the brightest in technology.

The Golden Torch Awards (GTA) recognizes excellence among technical professionals, corporate, government and academic leaders, and university and pre-college students.  These awards illustrate the possibilities that can be cultivated through support and responsibility.  The proceeds of GTA are used to create college scholarships for gifted high school students.

The idea of the Golden Torch Awards came under the vision of the Executive Director Mr. Charles Walker in 1998. Mr. Walker believed since NSBE is a major force in increasing the number of blacks into the science, technology, engineering, and math fields, NSBE should also highlight the best and brightest in the industry. After the vision of Golden Torch Awards came into existence a proposal was submitted to the National Executive Board and was approved. Once approved a steering committee was put in place to execute the vision and make it a reality. The first Golden Torch Awards took place at the 24th Annual National Convention in Anaheim, California.