Greetings from the Weldon School of Biomedical Engineering
Dr. Geddes Celebrates 85 years
Weldon Hires 3 New Faculty Members
Dr. Richard Borgens Receives Indiana Health Industry Forum Honor
Professor Sherry Voytik-Harbin Promoted
Graduate Student Profile-Silas Leavesley
David Lasater joins Weldon
Greetings from the Weldon School of Biomedical Engineering
With classes completed for the semester and campus a little quieter, it is anything but slowing down for the Weldon School. Let me highlight a few items keeping everyone busy this summer: moving into our new building, hiring three more faculty members, numerous awards for our faculty, preparation for our groundbreaking this fall. Please stop by this summer and see the new building, tour the new labs, and let us show you what Weldon has to offer. Have a great summer.

Leslie A. Geddes at his 85th birthday celebration.

On May 24th, we celebrated the 85th birthday of Dr. Leslie A. Geddes with a small surprise party in the Fu Room in Potter. Dr. Geddes was pleasantly surprised with the gathering. We look forward to honoring Dr. Geddes again at his surprise symposium on September 22nd in conjunction with our building dedication on that day.

The Weldon School continues to grow with the addition of three new faculty members. These additions to the Weldon family bring new strengths to the School and add new depth and capabilities in research and education.

Edward L. Bartlett, Assistant Professor of Biomedical Engineering, Assistant Professor of Biological Sciences, brings expertise in neurophysiology and neuroanatomy, with an emphasis on auditory systems. His research focuses on understanding how the auditory thalamus controls and shapes the flow of information between the auditory periphery and the auditory cortex in normal and pathological conditions. He earned his B.A. in physics from Haverford College, his Ph.D. in neuroscience from the University of Wisconsin, Madison, served a summer fellowship in computational neuroscience at the Woods Hole Marine Biological Laboratory, and served as a Postdoctoral Fellow and as a Research Associate at the Johns Hopkins University.

Lynetta Freeman, Associate Professor of Biomedical Engineering and Associate Professor of Small Animal Surgery in the Department of Veterinary Clinical Sciences, brings extensive experience in the development of surgical procedures and devices. Her research and development experience includes more than 15 years with Ethicon Endo-Surgery, Inc., finishing as Director of the Bariatric Surgery Innovation Team. Her clinical research interests are in the areas of laparoscopy and thoracoscopy, including exploratory laparoscopy, laparoscopic liver biopsy, laparoscopic ovariohysterectomy, and thoracoscopic procedures. She earned her B.S. in agriculture and D.V.M. degrees at Oklahoma State University, completed a small-animal internship program at Colorado State University, earned a M.S. in veterinary clinical sciences and completed a small-animal surgical residency program at Washington State University, and earned an M.B.A. in business administration from Xavier University.

Gudrun Schmidt, Assistant Professor of Biomedical Engineering, provides extensive experience in polymers, biomaterials, particularly hydrogels for three-dimensional cell growth and smart materials for controlled drug release, through research at the interface of polymer chemistry and physics, as well as nanocomposite materials. Her research focuses on the synthesis, development, and fundamental characterization of new multi-component and nanocomposite materials with hybrid properties. She earned her B.A. in chemistry, and M.S. and Ph.D in macromolecular chemistry from the Albert Ludwigs University of Freibrug, Germany; was a Postdoctoral Associate in a joint program with Lund University (Sweden), Institut Laue Langevin (France), and the University of Freiburg (Germany); was the Alexander von Humboldt/Feodor Lynen Postdoctoral Fellow in the Polymers Division of the Materials Science and Engineering Laboratory at the National Institute of Standards and Technology. An NSF CAREER awardee, she will join the Purdue faculty this summer from Louisiana State University.

Richard Borgens received the Indiana Health Industry Forum's 2006 "Outstanding Contribution of Scientific Commercialization Award" on June 13th. The award is given to individuals who make significant contributions to converting research to commercial use. Borgens is a Professor of Biomedical Engineering in the Weldon School of Biomedical Engineering, the Mari Hulman George Professor of Applied Neurology in the School of Veterinary Medicine, and a founder of Andara Life Science, Inc. More information on Borgens and his research into the treatment of spinal injuries and paralysis can be found here.

The Purdue Board of Trustees has approved the promotion of Sherry Voytik-Harbin to Associate Professor with tenure effective August 14, 2006. Dr. Voytik-Harbin's research in tissue engineering focuses on the Extra-Cellular Matrix (ECM), the three-dimensional microenvironment of fluids, fibrils, and other components that surround the cells in our bodies. While the two-dimensional response of cells is well studied and known, such reactions are dramatically different from the three-dimensional behavior in living organisms. Understanding this behavior is extremely important, since it could hold the key to improved repair and regeneration of damaged tissues, biomaterials, and even control of functions such as cell death. An in-depth profile of Dr. Voytik-Harbin can be found here. 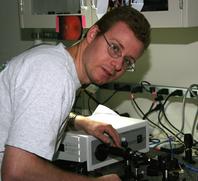 Silas Leavesley, in the lab.

"You have to have something to do outside of school."

This is how Silas Leavesley sums up his work with the University Church at Purdue, where he assists with maintenance, plays the piano, and leads the Sunday morning service along with his wife Heather. The question facing everyone else at the Weldon School is how Silas has any spare time at all.

First, he is the BME representative to the Graduate Student Government. In addition, he has taken on duties as the chair of the promotions committee. In that capacity, he has helped ensure that events are advertised, awareness raised with both students and departments about the graduate student government, and to ensure that important information reaches its intended audiences. "It's definitely been an interesting experience working to get every department at the University represented," he notes.

Second, he has taught undergraduate BME students after serving on the committee that designed the BME transport lab. "I enjoy teaching," he states. "It was a very neat experience, and I recommend teaching to anyone in the Ph.D. program." It was also clear that others enjoyed having him teach, as he was one of three from Weldon honored with the College of Engineering Magoon Award for Excellence in teaching.

Third, he owns a home and works on it. Actually, he, Heather, and the house are owned by Luke, a black & white American shorthair cat. "I chose it because the mortgage is less than the rent, and it is a much better deal than paying rent," he says.

Finally, there is his "real" work. As a graduate student working with Professor Paul Robinson in the imaging and flow cytometry lab, Silas has been busy.

He has developed and patented an endoscope that not only does traditional macroscopic imaging, but also allows microscopic imaging to be done simultaneously. Using this new device, doctors can visually detect areas for investigation, and then "zoom in" to a cellular level without the need for separate procedures. Leavesley is now working with undergraduate Molly Fu to develop methods to relate the macro and micro images, so that a complete guidance system for spatial orientation is available to physicians using the system.

His main research, however, is in helping pioneer the use of multispectral imaging for medical diagnostics. When an image is taken, many different wavelengths are combined to produce the image. What multispectral imaging does is to separate the different wavelengths or ranges, allowing chemicals, compounds, and different types of cells to stand out. In small animals, the focus of his research, it allows researchers to track the spread of medical dyes, drugs, and even bacteria.

Not only does this hold promise for improving animal and human healthcare, it opens new opportunities for assisting both pharmaceutical development and improving dosage rates. New drugs can be tracked to see if they go where they should and do as they should. Such tracking can also allow researchers to determine the proper amount of a drug needed for a given treatment.

This industry-funded research is scheduled to be functional by August and development completed by the end of the year. That works well for Silas, since it will then leave him a full year to perform any wrap-up research and complete his Ph.D thesis.

Yet, one fundamental question remains: where does he find the time?

David Lasater joins Weldon
David Lasater has joined the Weldon School as the Director of Development. David replaces Alyssa Wilcox, who stepped down to move with her husband who accepted a faculty position at the University of Tennessee. David served as Director of Leadership Gifts for the Krannert School of Management since 2002. Prior to coming to Purdue, he was a Director of Development at Ball State University. David received a B.S. from Ball State University, M.A. from the University of Michigan and is a Ph.D candidate at Indiana University. David will be working closely with Brian Knoy, Manager of Stewardship, to develop support for our school. Please welcome David to our Weldon Team.