Under a $2.2 million R01 grant from the National Institute of General Medical Sciences (NIGMS), Taeyoon Kim, an assistant professor in Weldon School of Biomedical Engineering at Purdue University, and his collaborators will study how structural elements within cells generate mechanical forces. The researchers will also illuminate how these biomechanical forces are translated to affect the extracellular matrix (ECM) that surrounds the cells, and to nearby cells as well. 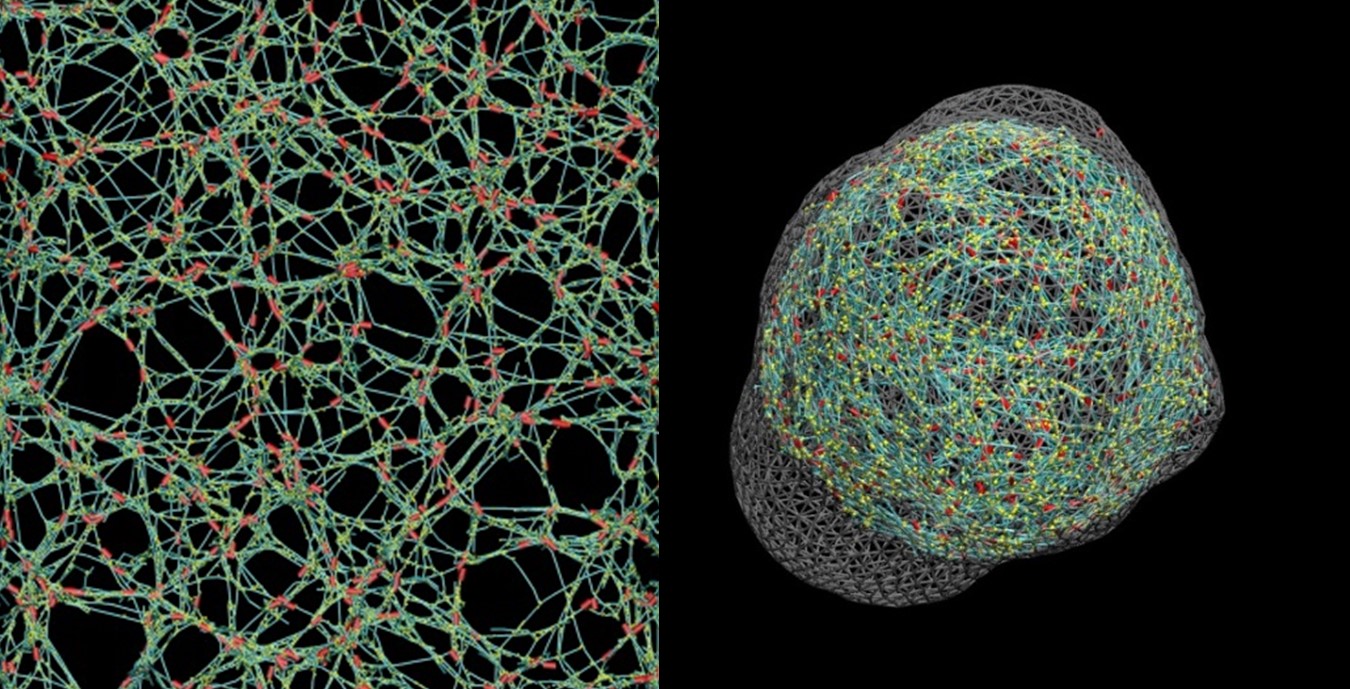 Cells generate mechanical forces to perform many of their biological functions, such as cell division or migration, Kim explained. Cells achieve this primarily via a polymeric structure known as the actin cytoskeleton, in which a protein called myosin binds and pulls actin filaments to generate force as a molecular motor.

These two factors make it very hard to reconstitute the force generation process occurring in cells using in vitro experimental systems. “There is a significant difference between what is happening in the cell and what in vitro experiments have shown using proteins purified from cells, but we can fill the gap between these two with the help of computational models,” he said.

The project will combine multi-scale computational modeling with experimental works using both artificial cells and animal cells. Kim will primarily use a supercomputing environment at Purdue ITaP for the intense computation required for his multi-scale models. The models then will be validated and fine-tuned by results from in vitro experiments in the labs of co-investigators Michael Murrell, assistant professor of biomedical engineering at Yale University, and Ovijit Chaudhuri, assistant professor of mechanical engineering at Stanford University.

The second main focus will be on how the actin cytoskeleton can remodel the ECM surrounding the cell, and then how the ECM can transmit mechanical forces between cells. Chaudhuri, who studies interactions between cells and ECM, will lead the in vitro work examining these processes using animal cells embedded in three-dimensional ECM.

“Insights about how cells generate and use force will help us to understand various pathophysiological processes, such as cancer metastasis,” Kim commented. Among its roles in metastasis, the actin cytoskeleton drives how cancer cells exert forces and deform their bodies as they migrate through tissues, and how these cells communicate biomechanically via ECM with other types of cells that pave the road for their migration, he said.

Image (top): These are images from computer simulations of the actin cytoskeleton and an artificial cell by the Kim lab. On the left, the actin cytoskeleton network assembled for measuring force generation in the network. On the right, the artificial cell showing the membrane partially detached from the actin cytoskeleton, which is similar to “blebs” observed in animal cells. Cyan, red and yellow represent actin, molecular motor, and cross-linked proteins, respectively.
Image (bottom): Images from computer simulations of cells embedded in a three-dimensional extracellular matrix (ECM) structure. On the left, the cell membrane is shown in red. Blue and white show the amount of force being exerted on the ECM as the cell contracts, with white showing the strongest force. On the right, evidence for how forces can be propagated between cells embedded in ECM. Membranes of 25 cells are shown in yellow. Force exerted on the surrounding ECM by cells is displayed in red, white and blue, in descending order of force.