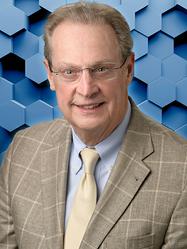 Dr. R. Byron Pipes was elected to the National Academy of Engineering in 1987 in recognition of his development of an exemplary model for relationships between corporate, academic and government sectors to foster research and education in the field of composite materials.  As co-founder and director of the Center for Composite Materials at the University of Delaware, he developed an industrial consortium of over forty corporate sponsors from the USA, Japan, Germany, France, Italy, United Kingdom, Belgium, Sweden and Finland.  Today, almost 40 years after its founding, the University of Delaware Center is the largest and most successful of its kind in the United States. Research expenditures have exceeded $100 million.

Dr. Pipes developed the Composites Design and Manufacturing HUB (cdmHUB) to meet the simulation needs of the growing composites industry in 2013. To date, the cdmHUB is supported by five corporate sponsors (Boeing, Rolls Royce, Cytec, Dassault Systemes and Henkel) and DARPA. His most recent research programs focus on the development of composites manufacturing with emphasis on additive manufacturing. He currently leads the Indiana Center of Excellence of the DOE Institute for Advanced Composites Manufacturing Innovation (IACMI), chairs the Technology Advisory Board and serves on the Board of Directors of IACMI. His center will occupy the Indiana Manufacturing Institute in the Purdue Research Park in 2016. He has active programs in the study of the advanced manufacturing science for composite materials.