A multi-institution team of researchers led by Dr. Letian Dou, the Charles Davidson Assistant Professor of Chemical Engineering at Purdue University, has discovered a unique mechanism that explains how halide ions diffuse through stacked two-dimensional (2D) halide perovskite heterostructures. Their discovery, published in Nature Nanotechnology, may help solve the perovskite instability issues and consequently speed up their commercialization for application in common electronic devices. 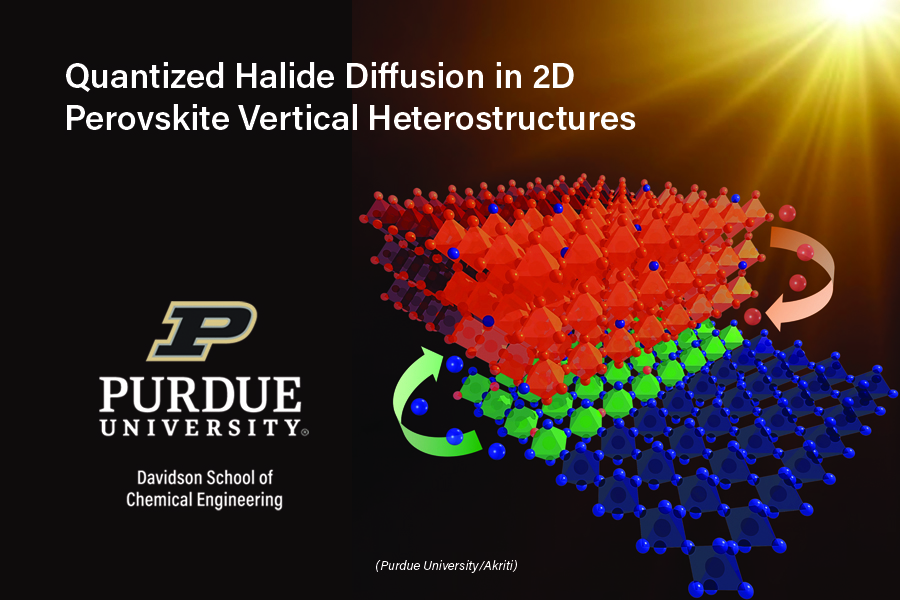 A multi-institution team of researchers led by Dr. Letian Dou, the Charles Davidson Assistant Professor of Chemical Engineering at Purdue University, has discovered a unique mechanism that explains how halide ions diffuse through stacked two-dimensional (2D) halide perovskite heterostructures. Their discovery may help solve the perovskite instability issues and consequently speed up their commercialization for application in common electronic devices.

"Halide perovskites have gained tremendous attention as promising semiconductors for their use in myriad electronic devices, such as solar cells, LEDs and transistors," said Akriti (left), a 4th-year PhD student with Dr. Letian Dou and co-lead author of the study with Dr. Enzheng Shi and Dr. Stephen Shiring. “However, they are not yet commercially produced because of their poor material stability.”

“Perovskites are already competing with well-established semiconductors due to their low-cost synthesis and excellent optoelectronic properties. Improving the fundamental understanding of mechanism and factors influencing perovskite stability will be a step forward in realizing the full potential of perovskites in the field of solid-state electronics.”

The intrinsic instability of perovskites is due to their ionic framework, which creates a soft lattice structure that allows a high level of ionic mobility between the layers. As the Dou research group observed the ions moving between two different perovskite materials stacked one atop the other, they planned to calculate the diffusion rate, or how quickly the ions were migrating between the stacks.

"If you look at the concentration of the ions through the stacks, you would expect to observe a continuous concentration gradient," explained Dr. Stephen Shiring (right), a postdoctoral scholar in the research group of Dr. Brett Savoie, the Charles Davidson Assistant Professor of Chemical Engineering at Purdue, and co-lead author of the paper.

“In a continuous concentration gradient, from the time you started monitoring the movement, the top layer would be predominantly one type of ion, and the next layer would be less concentrated because the ions have moved through it, and it continues in this fashion until eventually it reaches a constant concentration throughout.”

In a classical diffusion, before equilibrium is achieved, each subsequent layer has a concentration that is a slightly lower than the previous layer. But instead, the researchers observed that in their perovskite systems the ions did not move according to the expected classical mechanism. Rather than diffusing continuously throughout the stacks, the ions seemed to be spilling over from one layer to another layer, likely due to a thermodynamically preferred composition of the perovskite system. This was the first time such “quantized” diffusion behavior has been observed and reported in literature.

Experimentally, Dr. Dou’s research group knew the initial and final ionic concentrations in the material, and they knew how much time it took to reach the final concentration. Missing was the model to describe the layer-by-layer diffusion within the perovskite materials. Existing diffusion models for three-dimensional (3D) perovskites relied on ionic movement between the layers dictated by a continuous gradient. Therefore, the previous analytical solutions did not account for the layer-by-layer diffusion. To resolve this issue, Dr. Dou’s team needed the modeling and simulation expertise of Dr. Savoie’s research group.

“Our simulations provide a molecular scale description of how ion diffusion occurs in these materials that complements the experimental characterizations,” explained Dr. Savoie. “In this study, we were able to directly model the quantized diffusion mechanism to establish the relative halide diffusivity in these new materials.”

Using a computer simulation method known as Kinetic Monte Carlo, which simulates a process that evolves over time, Dr. Shiring implemented a model which accounted for the layer by layer diffusion behavior of ions within the perovskite materials.

After analyzing the mechanism of diffusion and establishing a mathematical model for diffusion coefficient estimation, the team carried out a comparative study on the role of different organic and inorganic components in influencing halide diffusion. They found that organic cations played a larger impact on halide migration than inorganic components. More importantly, bulkier conjugated organic cations were found to successfully inhibit the undesired halide diffusion.

Now that they can use a simple heterostructure platform to calculate ion diffusion, the team is looking forward to establishing a database summarizing the diffusion coefficients for different types of halide perovskites. This will provide valuable information to the community and guide the research of stable perovskites for optoelectronics. Furthermore, the group will study how the ions respond to electrical field in the near future.

This work was carried out with the help of Jiaqi Yang and Prof. Peilin Liao of Materials Engineering at Purdue University, who performed Density Function Theory calculations; Biao Yuan, Xiangchen Hu and Prof. Yi Yu of Shanghai Tech University, who performed Transmission Electron Microscopy characterizations. We would also like to acknowledge the work of two undergraduate students; Cindy L. Atencio-Martinez, who was a visiting student from University of Los Andes, Colombia and is joining Purdue University’s Department of Chemistry in the fall of 2021 as a graduate student; and undergraduate student Alan J. Pistone, who is currently a junior in the Davidson School of Chemical Engineering at Purdue University.

Learn more about the Davidson School of Chemical Engineering at Purdue University: https://engineering.purdue.edu/ChE