at the following link or directly within the Fusion 360 application.

every 6-8 weeks.  Typically, the major updates modify the file format for Fusion 360 models.  If a file is modified

version.  If you have the latest Fusion 360 package installed, there should be a shortcut in the start menu labeled

"Fusion 360 -Check for Updates".  Clicking this will check what version of Fusion 360 your computer has installed

and what update we have made available to our systems.  You will then be prompted if you want to apply this

update.  The update can take between 5-15 minutes depending on network congestion and the speed of your

The speech bubble icon shown below on the far left is the message notification icon.  Clicking on the it

will display Fusion 360 system messages, such as update notifications.

This notification below indicates that an update is available to be installed, however the account that

launched Fusion 360 does not have the access to install the update. 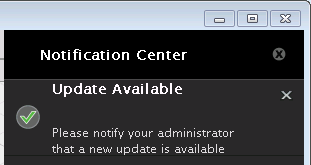 Fusion 360 can also be downloaded for personally-owned systems from the following link.  Fusion 360

should automatically update itself as updates become available.

Type in a few keywords describing what information you are looking for in the text box below.

Server: zeoclient-03
Generation took 0.05 seconds Copyright © 2021, Purdue University, all rights reserved.
An equal access/equal opportunity university.
If you have trouble accessing this page because of a disability, please contact the Webmaster at webmaster@ecn.purdue.edu.
Why secure web services?